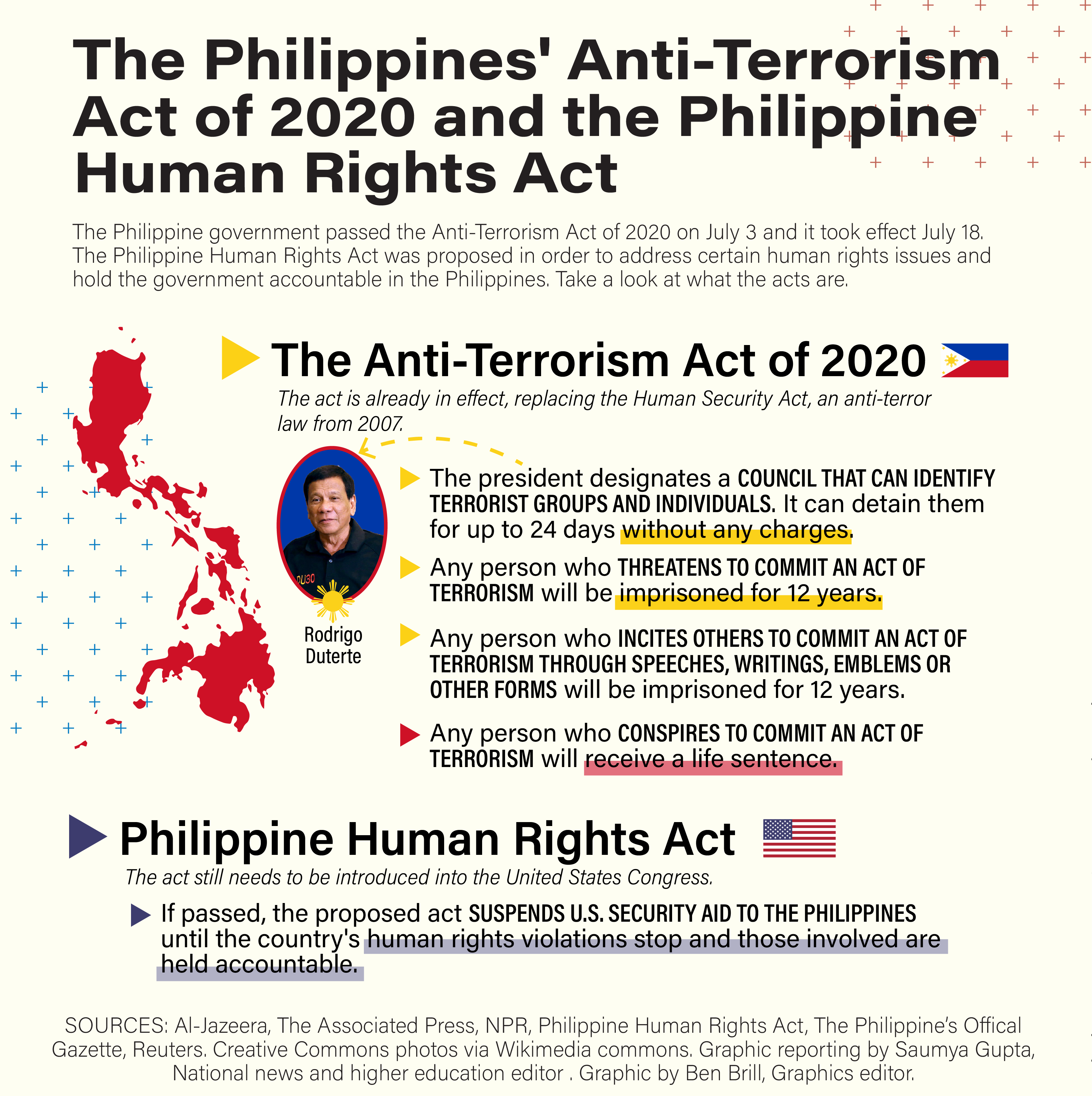 The UCLA student government passed a resolution against an anti-terrorism law in the Philippines.

A resolution from the Undergraduate Students Association Council represents the official opinion or stance of the council and in turn the overall view of undergraduate students at UCLA.

The resolution, which was approved at the council’s July 28 meeting, was created in solidarity with Anakbayan UCLA, a chapter of an international youth and student organization that advocates for democratic ideals in the Philippines.

The Philippines’ Anti-Terrorism Act of 2020, which took effect July 18, has been met with opposition due to concerns over human rights, according to NPR.

The law replaces a previous anti-terrorism act in the Philippines called the 2007 Human Security Act, said Carl Illustrisimo, who helped write the resolution. The Human Security Act was almost never used, said Sidney Jones, an expert on security in Southeast Asia, to NPR.

The newly passed anti-terror law expands the definition of terrorism, making it extremely vague, said Illustrisimo, who is also a member of Anakbayan UCLA and a fourth-year sociology student.

Illustrisimo said he thinks the expanded definition endangers the lives of political organizers and human rights activists in the Philippines and in the United States.

For example, inciting others to commit terrorism is now an offense under the new law, Illustrisimo said. This can be done through speeches, writings, proclamations, emblems and banners, among other things, he added.

Chuck Parcon, chairperson of Anakbayan UCLA, said laws like the anti-terror law target organizations that speak out against the government, like Anakbayan.

“They qualify us as terrorists, even though our activism is really just speaking on behalf of the conditions of the community,” said Parcon, a third-year Asian American studies student.

Parcon added that it’s not terror that the administration is vilifying, but rather freedom of speech and freedom to peacefully assemble, among other basic human rights.

The anti-terror law follows a series of human rights violations occurring in the Philippines under President Rodrigo Duterte. According to the USAC resolution, there have been more than 300 extrajudicial killings and more than 2,500 incidences of unlawful arrest during Duterte’s term in office from July 2016 to April 2020.

Lucy Burns, an associate professor of Asian American studies at UCLA, said the anti-terror law also follows the recent closure of ABS-CBN, the largest broadcast network in the Philippines, as well as a cyber libel conviction against journalist Maria Ressa in June. Burns added that both cases are connected to criticisms in reporting on Duterte and his administration.

“Really, for me, the most concerning thing … it’s really the fear that it instills,” Burns said. “What can we say? What can we do? Can we have a critique? Can we still have a voice of opposition to the majority to those in power?”

50 congressional representatives thus far, including Alexandria Ocasio-Ortez and Ilhan Omar, have condemned the anti-terror law, according to the USAC resolution.

The resolution calls for Los Angeles congressional representatives Ted Lieu and Karen Bass to introduce the legislation and call for a hearing on the issue in the House Foreign Affairs Committee.

However, Illustrisimo added that Anakbayan primarily wants the UC to actively condemn the law and express support for the PHRA.

“In doing so, that would help us push the PHRA even further and actually make it into reality in the U.S. Congress and actually help people out who are going to be suffering the most from the (anti-terror law) back in the Philippines,” he said.

Emily Luong, the USAC internal vice president, said she thinks it’s important for the UC and UCLA to take a strong stance against human rights violations.

USAC External Vice President Aidan Arasasingham said there is a strong legacy of students leading these kinds of conversations.

“We as students are not only the conscience of our university, but we’re the emerging conscience of our world,” said Arasasingham, who is also a fourth-year global studies student. “It’s all a consistent thread of students showing up and showing out, and driving the conversation of the world in which we want to inherit and live in.”