Throwback Thursday: Bruins have been dealing with technical difficulties since the dawn of the internet 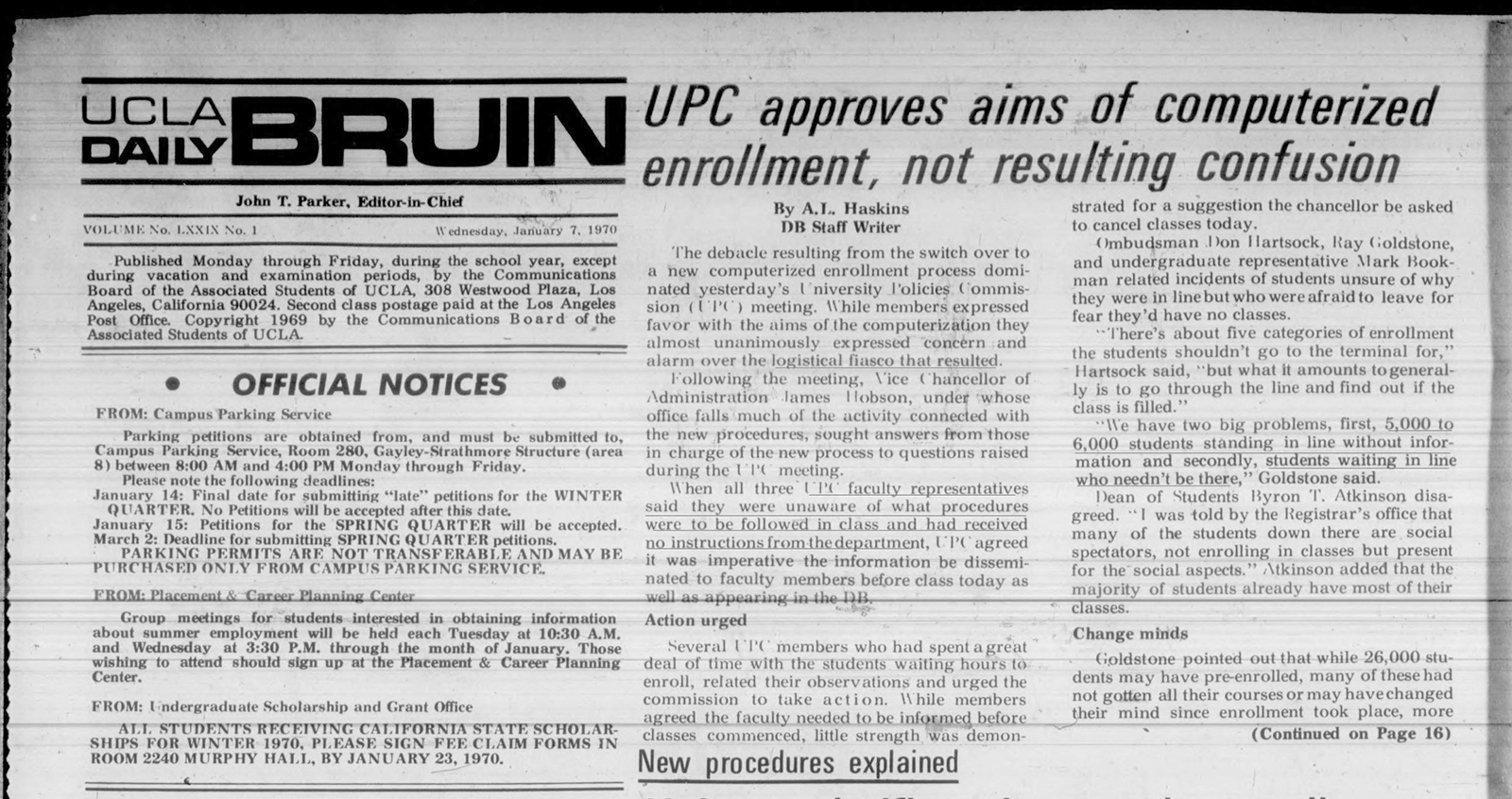 “Ya’ can’t cry on a computer’s shoulder!” a UCLA student said in response to the school’s switchover to computerized enrollment in an article printed in 1970. Though from 50 years ago, it’s a sentiment many of us can sympathize with today as we adapt to classes on Zoom and strive to stay connected while waiting for the worst of COVID-19 to pass.

Earlier generations of Bruins may never have foreseen the degree of online learning that we engage in today. However, stories from past Daily Bruin issues give insight into how UCLA has grappled with and promoted changes in technology over the years, leading us to the virtual university that is now, at least temporarily, our new normal.

In 1969, the year following the establishment of UCLA’s computer science program, a group of computer scientists working in Boelter Hall created the world’s first network connection, part of what is known as ARPANET. The internet was born on Oct. 29 of the same year when this team, under the direction of UCLA computer science professor Leonard Kleinrock, used ARPANET to transmit a message to the Stanford Research Institute.

Of course, the internet still had quite a bit of evolution to undergo before it would become what it is today. For example, the team of computer scientists had intended to send the message “LOGIN.” However, the system crashed and cut the word off at the first two letters.

Kleinrock took this in stride and reinterpreted the incomplete word “LO” as the beginning of “Lo and behold.” Although unintended, the spontaneous message aptly foreshadowed the profound impact the internet would have on humanity.

Now, thanks to the internet, some 40,000 UCLA students are exchanging messages, submitting papers, attending class and hosting graduation parties online in an effort to hold our community together during these unpredictable times. Lo and behold, indeed.

According to a Daily Bruin article from 1970, the switchover to a computerized enrollment process at UCLA resulted in technical and logistical issues reminiscent of the sudden transition to online courses in March due to COVID-19. Whereas students would previously sign up for classes in person at the various departments, computerized enrollment was meant to streamline the process by allowing students to enroll in classes across departments simultaneously at “television-type terminals” located in Ackerman Union.

Students designed much of the enrollment system’s “software,” which in the original article from 1970 was a word put in quotes and followed by a thorough explanation of its meaning. Needless to say, times have changed.

Aside from occasional crashes, the technical system operated relatively smoothly. Difficulties arose primarily from oversights in communication and organization which, in the words of Daily Bruin staff writer A.L. Haskins, resulted in a “logistical fiasco.” Haskins said in the article that enrollment instructions were unclear and administrators, as well as faculty members, were unable to help students. Consequently, thousands of students waited in line for hours to access the terminals used to enroll in classes.

The switch to digital learning platforms because of COVID-19 has also resulted in various obstacles for the UCLA community. In addition to standard issues like spotty Wi-Fi and sharing small spaces with housemates or family, this transition has manifested more serious problems at UCLA such as incidents of racist “Zoombombing” in which individuals have used Zoom to anonymously interrupt classes with racial slurs.

The unfavorable student reactions that the Daily Bruin reported in 1970 after this switchover reflect some of the difficulties students are currently experiencing with online learning.

However, while the computerized enrollment system initially experienced some growing pains, it eventually became a permanent change that ultimately provided a more efficient method for students to enroll in their classes.

On the other hand, while the University of Zoom, Los Angeles – as some call it – has allowed most of us to continue our education for the time being, it was implemented as a response to COVID-19 and may not be a permanent change.

The relative accessibility of computers and Wi-Fi these days made the sudden transition to Zoom classes possible. This reality, however, is a recent phenomenon. According to a Daily Bruin article from 1984, the ASUCLA Board of Control Budget Committee had to allot $5,600 to purchase a single computer that would carry out simple functions such as word processing and fiscal management.

While computers are much more affordable and versatile today than they were in the ’80s, not all students have equal access to the technology needed for online classes. Fortunately, UCLA’s Campus Library Instructional Computing Commons provides laptops, iPads and internet hotspots for long-term lending. In addition, the Bruin Tech Award, which was created in the wake of the COVID-19 campus shutdown, provides funding for students who don’t have access to computers and decent Wi-Fi needed for remote learning.

Acquiring access to technology can be a concern in and of itself, but adapting to technological changes in our education can be challenging as well.

Recognizing this same challenge, UCLA held a 10-day computer literacy seminar back in 1985 to update faculty and administrators on the latest advances in computer science, as well as to train them to operate specific types of computer equipment. This seminar met for eight hours a day and was aimed specifically toward faculty members in the UCLA Henry Samueli School of Engineering and Applied Science.

Similarly, UCLA prepared a series of remote workshops in 2020 to guide faculty in the transition to online teaching and learning as the school shut down due to COVID-19. The workshops offer guidance in instructional planning, using CCLE and Zoom and facilitating remote discussion sessions. In addition, the Office of Information Technology at UCLA offers 24/7 access to online educational tools to help faculty, staff and students improve their computer literacy and take full advantage of various resources offered through UCLA.

If the past is any indication, our relationship with technology may likely continue to be defined by a coexistence of wonder and annoyance. As we continue to navigate these changes, it might be helpful to remember that, no, we can’t cry on a computer’s shoulder, but at least technology helps Bruins continue to learn and to be there for one another in these unprecedented times – just as they have in the past.