The Quad: Looking into how the coronavirus impacts the election process 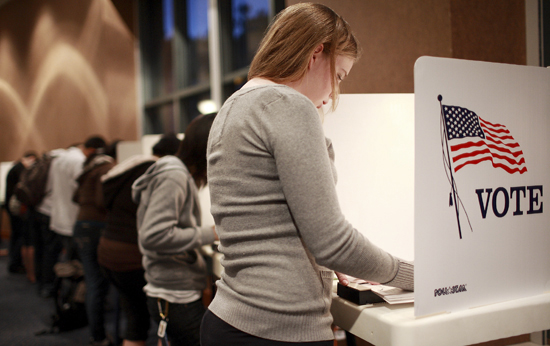 Many primary elections across the United States have been postponed, adding uncertainty to how the presidential election will be conducted in November. (Daily Bruin file photo)

While presidential elections in the United States are often fraught with controversy, intrigue and memorable sound bites, never before have we had an election cycle quite like this one.

As the United States grapples with the changes necessitated by the novel coronavirus, such as social distancing and the closure of many nonessential businesses, many people fear some of these temporary changes could permanently alter the institutions that define U.S. democracy – specifically elections.

Many state primary elections scheduled for March and April have been postponed into June and July, and the Democratic National Committee postponed the Democratic National Convention in Milwaukee set for the week of July 13 to the week of August 17. Leaders in these states worried traditional elections could expose voters to the coronavirus through interaction with poll workers and other voters, as well as through the use of shared equipment.

To mitigate expected lower turnout and encourage social distancing, politicians are looking to expand absentee mail-in voting by extending deadlines and sending out mail-in ballots to all registered voters. Oregon, Washington, Utah, Colorado and Hawaii already rely primarily on mail-in ballots. However, implementing this change in other states could prove more difficult.

For one thing, many people fear sending mail-in ballots to every registered voter could be too costly for some states. The Brennan Center for Justice estimated this overhaul could cost up to around $1.4 billion for the November election alone.

[Related: Graphic: Breaking Down the Primaries]

Aside from cost, some are concerned there is simply not enough time to securely print and process mail-in ballots for the elections. Additionally, a massive public education campaign would need to be carried out to inform the public of the new systems and rules.

While many believe measures such as postponement, the expansion of all mail-in ballot elections and extensions for absentee voting protect citizens during the pandemic, others fear such changes are not only impractical, but also dangerous to democracy.

Unlike other states, Wisconsin held its election as planned April 7 despite coronavirus concerns. This decision came from the Wisconsin Supreme Court after Gov. Tony Evers attempted to issue an executive order postponing the election to June 9. According to the Wisconsin Supreme Court, the governor’s emergency powers do not authorize him to suspend or rewrite state election laws, which can only be altered through laws passed by the state legislature.

The U.S. Supreme Court overturned a lower court order in Madison, Wisconsin, which looked to extend the deadline for mailing in absentee ballots by six days. In a 5-4 decision, the Supreme Court ruled that lower federal courts cannot change election rules so close to the election itself.

UCLA political science lecturer Ajax Peris explained why higher courts like the Wisconsin Supreme Court are hesitant to allow officials such as governors to postpone elections when governors do not normally possess this power.

“If a decision to postpone is made in a partisan fashion, or made by the executive branch without approval of the legislature, then doing so can definitely set a dangerous precedent,” Peris said. “Not so much because of the postponement itself, but because of the process by which the decision is made.”

Despite fears that these rulings would result in extremely low voter turnout, 34% of the electorate voted either in person April 7 or through absentee mail-in ballots, a higher turnout than the 2012 primary, according to NPR.

However, the election did not occur without its complications, especially in Milwaukee, where there were only five polling places instead of the planned 180. As a result, many voters in Milwaukee faced longer wait times.

Some blame the seemingly chaotic election circumstances on the primarily Republican state legislators who refused to postpone the election, while others argue local Democratic officials in Milwaukee did not prepare adequately, failing to take advantage of resources such as the 2,500 members of the National Guard sent to work the polls.

This disagreement illustrates how partisanship shaped the nature of the primary election in Wisconsin. Moreover, Peris explained how even pandemics can become political.

“It wouldn’t be a partisan issue, except they can’t agree on what’s most beneficial,” Peris said. “Or perhaps it’s partisan because officials at various levels are unwilling or unable to do the ‘most beneficial’ thing, so they have to convince us that what they are doing is most beneficial.”

As we approach the November election, leaders will likely prepare for continued social distancing restrictions by increasing their capacity for mail-in ballots.

However, Peris notes that changing the rules for a general nationwide election is more difficult than for state primary elections.

“A general election can be thornier, because of the many rules at federal and state levels about the timing of newly elected officials taking office,” Peris said. “Or in the case of the president, the timing of the casting of the Electoral College votes.”

During this time of great change, it is important to consider how these temporary changes could permanently reshape our society. One thing we can be sure of is that this pandemic will continue to influence the 2020 presidential election as voters look for a leader in these uncertain times.