The Quad: Tickle your tastebuds with these viral TikTok cooking trends 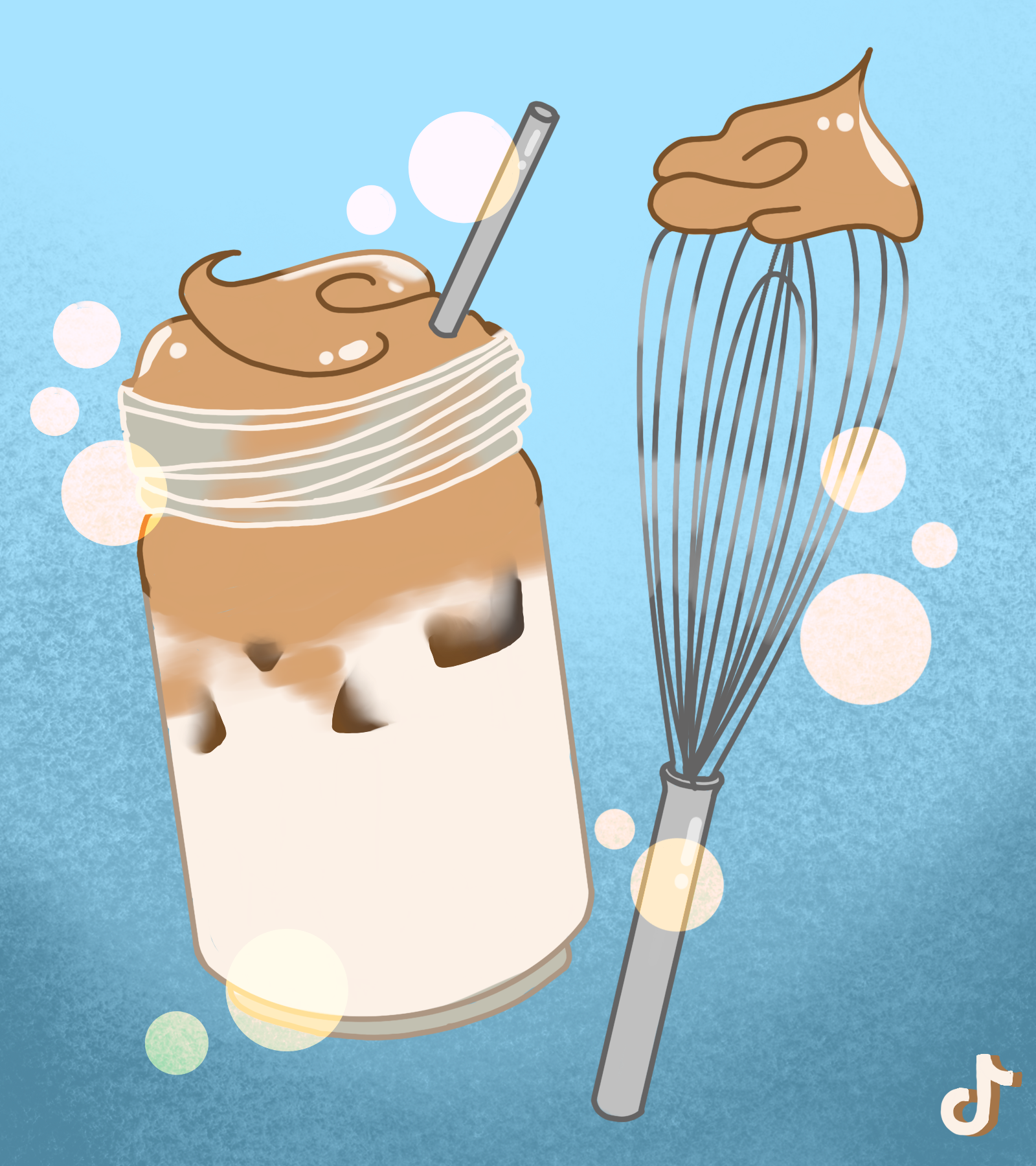 Amid the chaos of quarantine life, many of us homestayers seem to be finding solace in two places – TikTok, our kitchens and sometimes both.

Along with dancing trends, memes and pranks, TikTok has always provided a platform for sharing new “life hacks” and creative do-it-yourself projects – and it’s no secret that quarantine life has led to an abundance of recipe videos on one’s “For You” page.

First, the Korean dalgona coffee, which has also been dubbed “whipped coffee” or “TikTok coffee,” seems to have taken the app by storm, prompting TikTokers from dancers to influencers and even those without the app to give the creamy delicacy a try. As March progressed and stay-at-home orders were solidified, dalgona coffee seems to have kicked off a tidal wave of recipes shared on the app.

In the wake of dalgona coffee’s massive popularity, a number of other recipes have spread among app users. Often coined as “food hacks,” these tutorials allow those stuck at home to clean out their pantries in a somewhat unorthodox way while staying entertained at home and squashing the munchies at the same time.

It seems physically impossible to scroll through TikTok without seeing at least one upload of someone trying out the famed dalgona coffee. And the recipe seems to be popular for good reason: The beverage requires three main ingredients plus milk or a milk alternative, and results in a mixture resembling a coffee milkshake.

It calls for two spoons of instant coffee, two spoons of hot water and two spoons of sugar. The key to the drink is mixing an initially runny mixture even more to achieve a desired whipped consistency. When whisking by hand, it can take upward of half an hour, so using an electric mixer is highly recommended.

The original mixture, dark like black coffee and almost as thin as a cup of water, eventually transforms into a creamy, caramel-like consistency reminiscent of whipped cream. Once the shade turns to a light brown and the texture feels fluffy rather than runny, the mixture can be scooped on top of a glass of one’s choice of milk and ice. After a thorough stir, the ingredients fuse together to create an extremely thick drink with a hint of coffee flavor – somewhat like a less icy frappuccino or a frothy milkshake – leaving one feeling extremely full and sugar-satisfied.

Whether a coffee drinker or not, the recipe is definitely worth trying if an electric mixer is nearby. By hand, though, the lengthy process might only be worth the time during quarantine.

Continuing the theme of sweeter delicacies, TikTok also presents a simpler twist on the classic peanut butter cookie. Users have shown themselves using only five ingredients to prepare the batch – a cup of peanut butter, a cup of brown sugar, an egg, a teaspoon of baking soda and optional chocolate chips – all easily combined in one bowl.

Without the hassle of classic peanut butter cookie recipes, which call for flour and sometimes both white and brown sugar, those who scroll past this recipe are likely to already have a majority of the ingredients in their pantries. Some users have even shortened the list to only three ingredients, making batter out of just an egg, peanut butter and sugar.

With such a simple list, the only real hurdle is the tedious mixing of the heavy, unwavering peanut butter. Once it’s folded in with the other ingredients, though, a batch of about 20 cookies is on its way after baking at 350 degrees for about eight to 12 minutes.

Upon first bite, the suspiciously simple dessert does have one notable characteristic: It’s pretty clear that the primary ingredients are peanut butter and brown sugar. The cookie tasted more like a rolled–together mixture of the two rather than a smoothed out, fully even dessert. Without being masked by the more typical ingredients like flour, my tastebuds felt overpowered by salty, sugary nut butter and sweetness. Some might like that sort of thing, but it definitely reveals the simplicity of the recipe.

For anyone who already used up their flour experimenting with sourdough or simply wants to try out an easier recipe, the result was worth it for a couple of minutes of effort on the batter. Out of the plethora of TikTok food hacks, this seems to be one of the most rewarding suggestions.

For this next recipe, think french toast – but savory. In the breakfast egg sandwich hack which has widely garnered praise, TikTok users have been whipping up a classic scrambled egg mix by combining two or three eggs with different seasonings or cheeses they enjoy and dumping the whisked result into a pan.

Instead of keeping two slices of toast ready beside the stove, the sandwich hack calls for experimenters to dip the bread directly into the scrambled egg mixture while it’s cooking. The bread should be flipped so both sides are coated in the eggs, with the bottom ridges of both pieces of bread facing each other in the middle.

In a few minutes, as long as the sandwich-to-be is cooking in a nonstick pan, one smooth layer of bread and eggs can be flipped over like a pancake. In a couple more minutes. once the other side is cooked, the two bread slices are folded upon one another with the egg mixture finding itself both between the slices and also coating them. In different variations of recipes, users have been adding bacon or cheeses to their homemade combinations, so it’s a good way to use up ingredients that you happen to have on hand.

Tactically, this recipe proved to be the hardest – without the perfect flip in the middle while keeping the entire combination intact as one continuous sheet, the recipe no longer becomes a hack, but more so just a pan full of scrambled toast. My personal attempt resembled the latter, unfortunately leaving me with a cast-iron skillet of soggy toast and eggs that didn’t reach their full potential.

This recipe is another free-for-all option in which you can try using whichever baking ingredients you might have lying around the kitchen. The measurements often vary between uploads, but across the board, most users have combined four to five tablespoons of flour baked in the oven for a few minutes, a tablespoon or two of melted butter, a tablespoon or two of milk, a tablespoon of brown sugar, a dash of vanilla extract and chocolate chips.

The key seems to be finding the right ratio of flour to liquid ingredients, but TikTok users qualm in disagreement over this, with every recipe varying in its suggestions and nearly all comments mentioning that the outcome is not impressive. Based on one trial, it seems as though a single tablespoon of the butter and a tablespoon of the milk – not more – might work best.

The edible cookie dough does have a lot of potential, though. With only measurements for a serving for one, trying the recipe doesn’t seem too wasteful, even if the result isn’t ideal. Some users have also changed the chocolate chips to a topping of their liking, with one viral video suggesting “edible cake batter” with colorful sprinkles and white chocolate chips.

These concoctions only scratch the surface of TikTok’s recipe empire – it seems as though a search for any meal in the app will lead to pages full of results.

During quarantine, giving one a try might be the perfect way to use up some old ingredients, find an easy take on a classic snack or at the very least, find a way to pass the time.