Even now, UCLA is under construction. This time it’s on a Minecraft server. 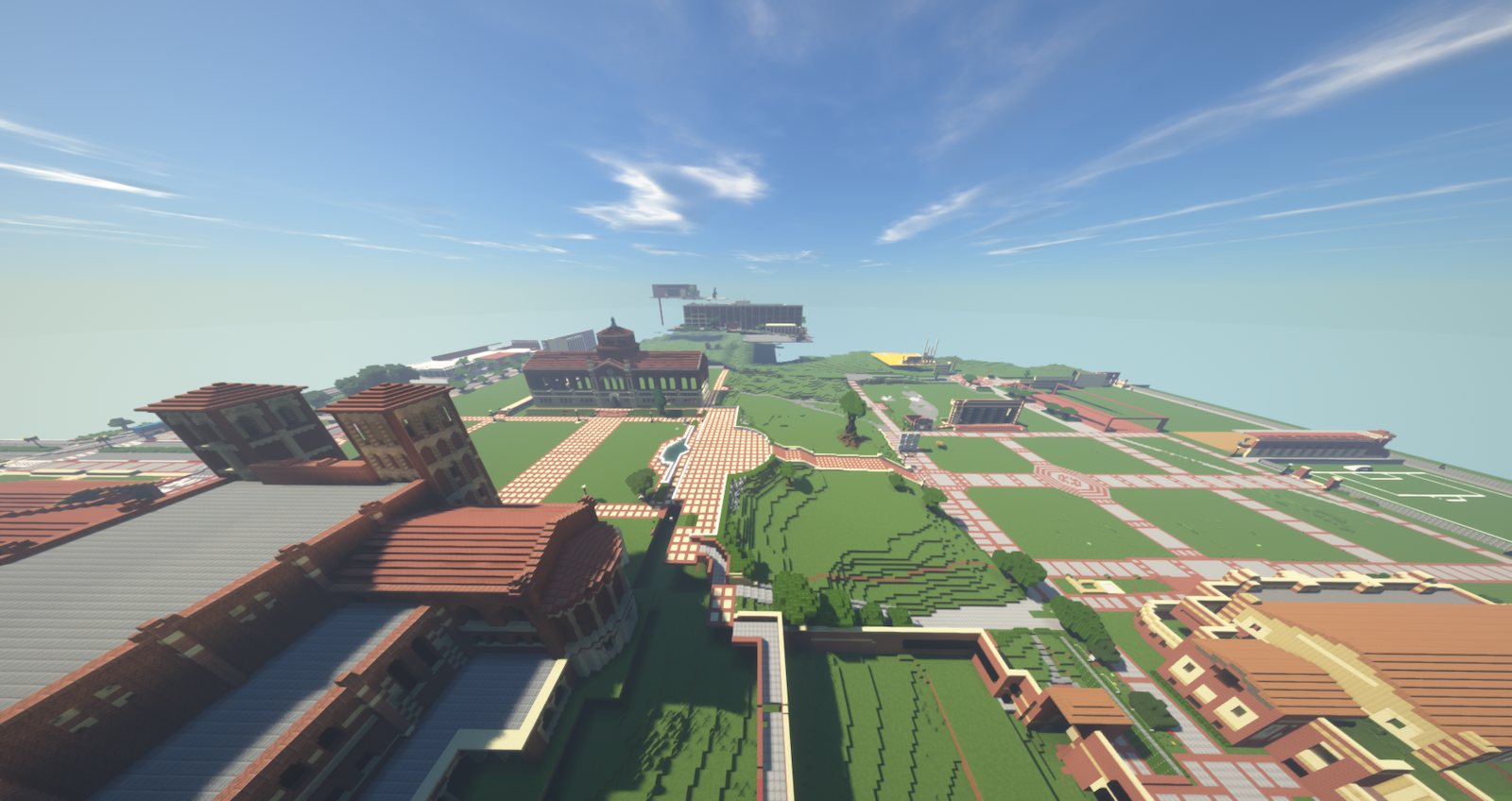 This is the kind of question students have been facing as they build a proportional, detailed replica of the UCLA campus – in Minecraft.

Choosing the right blocks and building UCLA structures at a 1-to-1 scale, where each Minecraft block measures a real-world meter, is no small task. However, their goal goes beyond creating a perfect replica.

Molloy and co-administrator Chris Ko, a second-year electrical engineering student, created the server March 19 with funding from the UCLA Bruin Gaming. Only a few days before, UCLA had announced that spring classes would be held online as a result of the coronavirus pandemic.

By then, many students had already moved out in a hurry, without time to say goodbye to campus.

“I feel like when we’re all kind of denied access to campus, we immediately want to recreate it so that we can go back,” Molloy said.

The server has gotten a lot of attention. Sunny Yen, co-founder and former president of Bruin Gaming and founder of UCLA Esports, said Monday afternoon that 736 unique accounts had visited the server.

Bruin Gaming promoted the server on its Twitter account and other platforms. At its peak, 40 to 50 players could be seen on the server at once, Molloy said.

Minecraft is an online sandbox game where players can explore natural landscapes and build from their imagination, all in the form of cubes that players can break and place.

The UCLA Minecraft server contains a creative world, where players have unlimited blocks to build with, and a survival world, separate from the campus build, where players gather materials and build their own structures.

“What other activity exists where you get to meet people from different corners of the globe, and you’re collaborating and building something?” said Ryan Dougherty, a graduate student in social welfare, about Minecraft.

To find the campus, a player must join the server, then teleport to campus using a command. They then find themselves at the foot of Janss steps, the replicas of Royce Hall and Powell Library looming in the distance.

Along with these two famous buildings, players have already built the walls of Dodd Hall and the Mathematical Sciences Building. Young Hall floats high in the sky over South Campus, waiting to be placed.

Beyond the stunning facades, the server also features several of the well-known spots and beloved idiosyncrasies of campus.

Potion-brewing stands serve as makeshift coffee machines in the Evelyn & Mo Ostin Music Café. Beloved huskies Elvis and Princess, in the blocky form of Minecraft dogs, are leashed to the Bruin Bear.

And as players walk up Janss Steps, a booby trap removes the sixth step to reveal a tomb, in reference to a myth popular among tour guides.

“We didn’t come into this going, ‘We’re going to build the best 1-to-1 re-creation ever,’” said Yen, who graduated in December 2019 as a sociology student. “We’re just here to have fun.”

For the most part, there is no formal leadership on the server, and players are encouraged to build whatever part of campus they know well, Molloy said.

Signs litter the world with edit suggestions from unidentified builders. Some of the buildings, such as the detailed renditions of Royce and Powell, are marked with signatures – signs with the usernames of individuals who took on the build.

“I’ve seen people add their own little touches to various buildings,” Molloy said. “Just really polish certain features of buildings that might have been overlooked by the original builder.”

Carmen Voskuhl, a third-year vocal performance student, worked with her group of friends in the small vocal performance program to build an accurate replica of both the exterior and interior of Schoenberg Hall.

They made it as true-to-life as possible, down to the furniture in each room and even mock advertisements for music school performances.

The friends know the building well, having spent so much of their time on campus in it. They filled in the gaps of their knowledge with a floor map someone had found of the building, Voskuhl said.

The casual and chaotic approach of the Bruin Gaming server has had its downsides. A few players came to the server early on to damage the build, Molloy said.

He thinks the culprits – “griefers,” as they are called in the online gaming community – were UC Irvine and UC Berkeley students, based on the locations they connected from, but there’s no proof.

The server now requires potential builders to contact an admin from their UCLA email account to receive building permissions in the campus world.

That’s not to say students are discouraged from participating.

“This project is big,” Molloy said. “We need a lot more people to help out.”

What’s it all for?

One reason founding players began the build was to potentially use the location for a mock graduation ceremony, Molloy said.

Molloy said he has also seen a lot of prospective UCLA students visiting the server in an impromptu, virtual version of a campus tour.

Kids as young as 12 years old have wandered through the server, Yen said.

“I thought that was hilarious. … They want to, I guess, interact and see what it’s like to be a college student,” Yen said.

But the biggest draw of the server, for Voskuhl, at least, has been the chance to see her friends again.

Before the pandemic hit, Voskuhl spent most of her time with her vocal performance friends. Playing online games has allowed them to stay in touch, even in self-isolation, she said.

“It’s honestly a good coping mechanism for all this chaos,” Voskuhl said.

Other players have even donated to Bruin Gaming when the server had technical issues because they’d met good friends through the server, Yen said.

Molloy said that players offer varying time commitments, some, he would guess, putting in hundreds of hours.

The project allows students a little more time with the campus – and the people – they left behind.

“It’s kind of our way of staying connected and staying close to the campus,” Yen said.