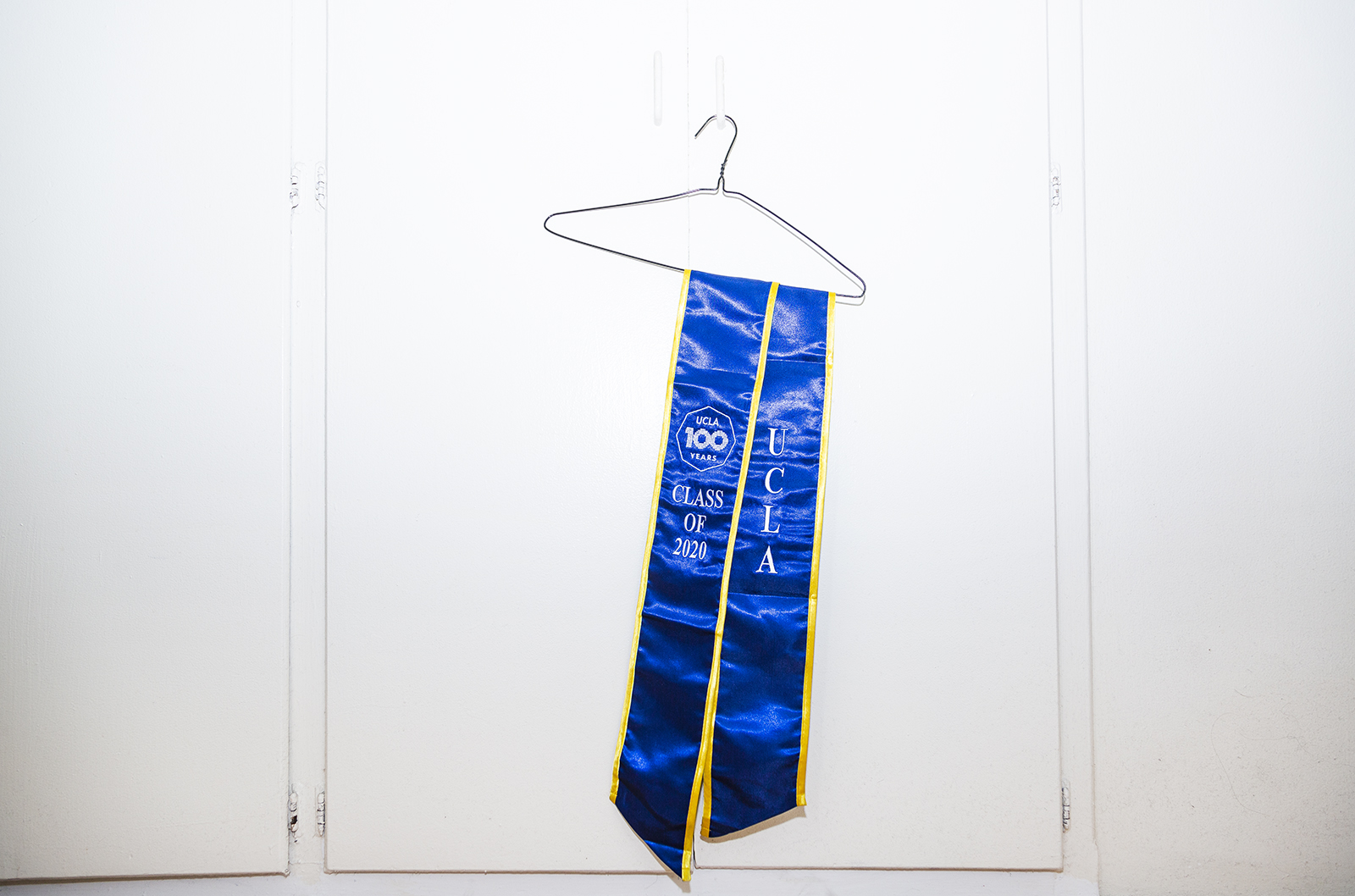 Fourth-year Mina Naziri was in class Friday when she heard the news.

Her professor, who doesn’t allow electronics in class, had been talking for the past 20 minutes about why he didn’t want to hold finals online. Suddenly, to the professor’s suspicion, the entire lecture hall started to giggle.

“Some girl kind of outed herself, and she was like, ‘Oh, you know, you kind of have to have your finals online this quarter, sorry,’” said Naziri, an international development studies student. “At first it was kind of funny, but now like two seconds later, it dawned on me, like, ‘Oh wow, all of my friends are going to leave and I might not see many of them again for a long time.’”

The new coronavirus outbreak began in December. The highly contagious virus, which has already killed almost 10,000 people worldwide as of March 19, is most dangerous for elderly people or people who are immunocompromised.

UCLA announced March 10 that, to limit the spread of the coronavirus, all winter quarter finals and the first two weeks of spring quarter classes would be conducted online.

Three days later, UCLA extended the change until the end of the school year. The school encouraged students to pack their belongings and leave campus. That same day, Grant Mooney, a fourth-year sociology student, formed “UCLA Seniors” on GroupMe. More than 2,000 students joined over the next few days.

For thousands of fourth years and their friends, life has begun to feel much more uncertain.

“(When I heard spring quarter was moving online) I didn’t get to the point of tears, but I almost did,” said Daniel Robertson, a fourth-year history and sociology student. “The feelings that I had going in my chest were like I got out of a nasty breakup or something–”

In the frenzy of moving out so quickly, Abdullah Nasir lost his chance to say goodbye to his friend Jonathan.

Nasir’s friend had been offered a free ride to his home city of Sacramento, but only had one day to pack his belongings.

“So that was completely devastating because … he texts me like, ‘Yeah, I really want to say bye to you,’ and then I was like, ‘Hey, I can’t because I’m in the middle of figuring everything out (myself),’” said Nasir, a fourth-year anthropology and geography student. “Then like two days later, I realized that he had left, and now I was extremely sad.”

Michael Schwartz, a fourth-year electrical engineering student, was with his girlfriend when the news broke. His girlfriend’s father had sent her a ticket for an 8 a.m. flight home the following day.

Schwartz realized he wasn’t going to be able to see his girlfriend for the rest of the quarter, and possibly longer.

In the chaos, seniors never got a real chance to say goodbye to their friends and their school, said Clara Nguyen, a fourth-year Asian American studies and human biology and society and student.

“I just wish there was more for us to feel like we’re actually being able to say goodbye,” Nguyen said. “I think that was never really an option for us.”

By Saturday, students were already packing up and leaving campus. Several seniors had gone already, expecting to be back by April 10, the university’s original end date for online learning.

Some had said goodbye to their friends only days ago, not realizing it might have been the last time they’d ever see them.

Fourth-year neuroscience student Dina Dowlat, went home last week expecting to return by April 10 but decided to stay when UCLA moved online for the rest of the year. The rest of her friend group are third and second years, and will be back at UCLA next year.

“They know that they’ll see each other again, even if they move home (for spring quarter), but they probably would not likely see me again at school,” Dowlat said.

Dowlat would never get another chance to have brunch at Bruin Plate with her friends. Nor would they ever get their weekly Tuesday night dinners together again.

Leaving a community, too

Kenisha Liu, a fourth-year history student, was waiting in J.D. Morgan Center to see her academic advisor when she got the phone call from her swim coach.

Her coach was busy at a meet with some of the other athletes, so Liu knew it couldn’t be good news.

The rest of the swim season was canceled, Liu’s coach told her.

At first, Liu was relieved. She had been nervous about the important final senior meet because of the high expectations that come with it.

“Then it really hit me, what it means,” Liu said. “I can’t have this last meet; with my team that I love so much, that (I) spent four years swimming for.”

For some fourth years, leaving UCLA meant losing their last experiences of being in Los Angeles.

Nguyen and her friend Jared had anticipated exploring LA to hang out and study. When they heard the news, they’d just arrived at the Santa Monica Capital One Café to find it closed because of special operating hours.

Losing a quarter is especially impactful for transfer students, who only had six quarters at UCLA to begin with, said Luke Cooper, a fourth-year history transfer student. He’d already only had two years to make a four-year experience.

Cooper said he felt defeated by the news that spring quarter would be online. Having only just settled after a difficult transition from a rural community, he felt uprooted once more.

“I finally started making a home out of it,” Cooper said. “You know, I actually have roots here, people that I love and my own social group that was all my own. And I thought that I would have one last quarter to say goodbye to it all.”

One of the most common concerns among seniors was the possibility that graduation would be canceled, like UC Irvine’s was last week.

On Wednesday, their fears seemed to come to pass. Although the primary commencement ceremony wasn’t canceled outright, Chancellor Gene Block announced all spring graduation ceremonies would be moved online.

Within minutes, it was clear on the GroupMe and Twitter that many fourth years were unhappy. The hashtags #uclapostpone and #postponegrad began trending on Twitter. Multiple petitions to postpone the ceremony, instead of moving it online, circulated the social networks.

Many students felt an online commencement was not enough.

Fourth-year history student Solomon Eibensteiner skipped his high school graduation ceremony to go skydiving, so he was looking forward to walking across the stage in college.

“Every time I thought about (graduation), I would just get a sense of giddy joy,” said Eibensteiner. “And it’s just like, super exciting. And since that’s now on the line, I’m just like, OK, that’s going to get stolen. And it really hurts.”

After the news sent shockwaves through Twitter and GroupMe, UCLA administration announced it would poll 2020 graduating students on MyUCLA. The poll is seeking seniors’ input on potentially holding an in-person commencement during the 2020-2021 academic year, in addition to the spring virtual ceremony.

Calling themselves The People’s Commencement, they are planning a student-run ceremony for fourth years at Santa Monica beach June 12. Cooper, who is one of the organizers of the event, said the idea came up at a hangout at Broxton in Westwood.

After initially envisioning a small party for their close friends, Cooper said they asked themselves, “What if we invited the whole school?”

It was too painful to imagine never having the chance to interact with friends and professors again, Robertson, another organizer, said.

“(This situation) kind of makes us want to, change it, … and we want to take it in our own hands and do something fun,” Robertson said.

Naziri, who is also an organizer, said they are aware of the risk of coronavirus transmission in group events. The organizers, the last of whom is Tobias Cheng, a fourth-year psychology student, are planning to discuss potential safety measures with public health officials.

However, last week, California Gov. Gavin Newsom ordered all gatherings of over 250 people to be canceled or postponed. UCLA took restrictions even further Monday, suspending all nonessential gatherings of any size.

If The People’s Commencement is banned by public health officials, the event would be canceled, said Robertson.

On the other hand, after spring quarter classes moved online, some fourth-year students said they might as well graduate early.

Rosemary Wallace, a fourth-year environmental studies student, said some of her friends even changed their degree to finish this quarter.

“I ended up deciding to graduate this (winter) quarter because I’m done with my major, but I (had) wanted to stay another quarter just to take some fun classes,” Wallace said. “But you know, what’s the point of doing that if it’s (just) going to be online?”

Wallace said she had been looking forward to staying involved in club activities. With everything canceled, though, she has no more reason to remain at UCLA.

“We’re all in this together”

Despite all the trouble caused by the transition to online classes, one student, Matthew Carter, knows thousands of others are going through the same thing.

“As much as we are self-quarantined and we are quite literally alone, I really do feel like we’re not alone in this,” Carter, a fourth-year geography/environmental studies student said. “There are 10,000 other seniors who are experiencing exactly what I’m experiencing.”

“Add ANY senior you know,” Mooney typed as the first message in the chat. The group currently has about 2,500 members.

The fourth years have used it for many purposes: to pass around petitions and share information, lend each other support and gather resources for their fellow classmates. But most importantly, they’ve used it to draw closer together, as they move farther apart.

All messages featured in the article were used with the permission of their authors.