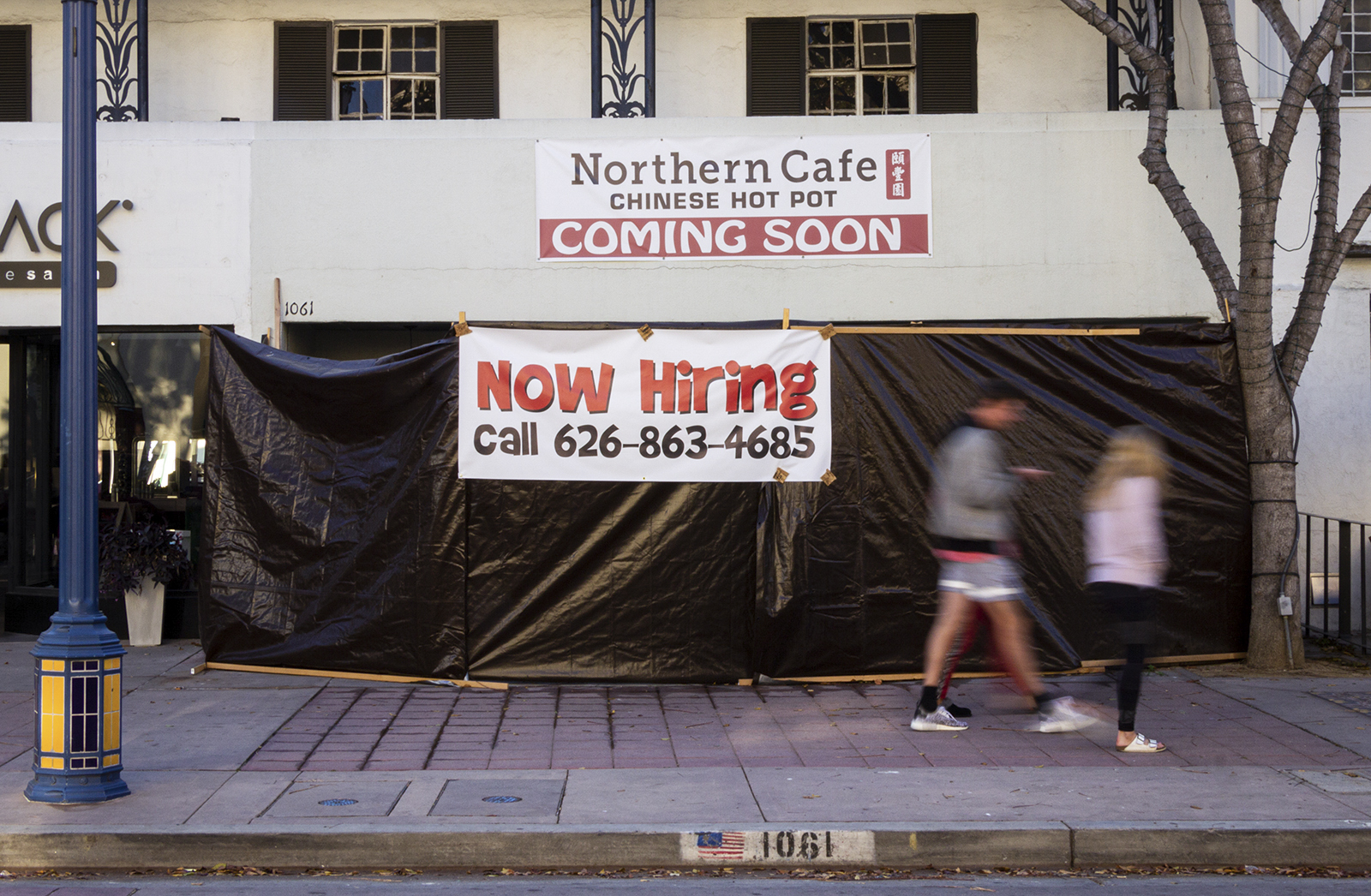 New businesses in Westwood Village must go through an extensive approval process for their storefront signs. In the meantime, many businesses opt to put up banners. Some stakeholders have called the process unnecessarily cumbersome. (Martín Bilbao/Daily Bruin senior staff)

A local business district committee is looking to amend a costly and slow storefront signage process.

The Westwood Village Specific Plan, a 1989 zoning and regulatory framework, requires exterior signage to gain approval from the director of planning based on a recommendation from the Westwood Community Design Review Board, according to Andrew Thomas, the WVIA executive director. The process is time-consuming and often unfruitful, some business owners said.

The DRB, appointed by city councilmember Paul Koretz, is a group of seven members that ensures local development, beautification and design adhere to the Westwood Community Plan.

Thomas said 39 businesses in the Village have approached the DRB about signage since January 2017. Many of these returned more than once without gaining approval.

“Westwood is fortunate to have a DRB that oversees our character, our aesthetic and our design, but the requirements to bring signage through the DRB does make the process more time-consuming, more expensive and sometimes unpredictable for our businesses,” Thomas said.

Some businesses in Westwood, such as Westwood Wireless and Campus Shoe Repair, have resorted to putting up temporary banners. Thomas said that, per the Westwood Village Specific Plan, temporary signs are permitted for up to 60 days.

“We have a number of these banners that are up in the district that are really replacing signage, possibly in an effort to circumvent the process,” Thomas said.

WVIA board member Jessica Dabney said the WVIA should consider creating an over-the-counter signage process for the Village that would circumvent the DRB and encourage businesses to open.

An over-the-counter process would entail meeting-prescribed requirements set by city planning staff such as sign size, letter size and lighting. Once the requirements are met, businesses would receive their permits and could put up their signs without going through the DRB.

The current signage process can take around three months, Duncan said. Businesses must fill out a geographic referral form and must review the Specific Plan’s practices and preferences before meeting with the DRB.

Once businesses have completed the package, their signage application will go before the DRB, which notifies businesses of its decision, in two to three weeks, Duncan added.

“The business community has regularly expressed its frustration to (the WVIA) about the process, the duration of it and cost,” Thomas said. “There are additional delays that regularly come in terms of getting your letters and approval from the planning department, which can stall the process.”

Jann Williams, chair of the Holmby Westwood Property Owners Association, said the reason for delays in the process could also be due to businesses not familiarizing themselves with the Specific Plan’s rules and regulations.

“The issue with signage, very often, was when the applicant came in, they didn’t have the rules from the Specific Plan,” Williams said. “If (applicants) would show up to the DRB, with having understood the rules, which I think is really the responsibility of the property owners, … it would certainly speed up the process.”

Westwood Village has a vacancy rate of over 20%, which Dabney said would be further exacerbated if there is not an over-the-counter process.

“This is one of those things that potential tenants have said to me: ‘I don’t want to come to the Village because I heard it can take nine months to put up a sign,’” Dabney said. “We want to fill the Village, but we want the Village to be beautiful.”

Thomas also attributed the difficult business climate to the amount of appeals that have been filed against businesses. Two-thirds of these appeals have been directed by three individuals who he thinks may be partly responsible for Westwood’s vacancy rate and business stagnation.

If an over-the-counter process were to be in the works, Duncan said the process would have to be part of a Specific Plan amendment.

The WVIA will further discuss adding the over-the-counter amendment recommendation to already agendized amendments during its board meeting March 19.