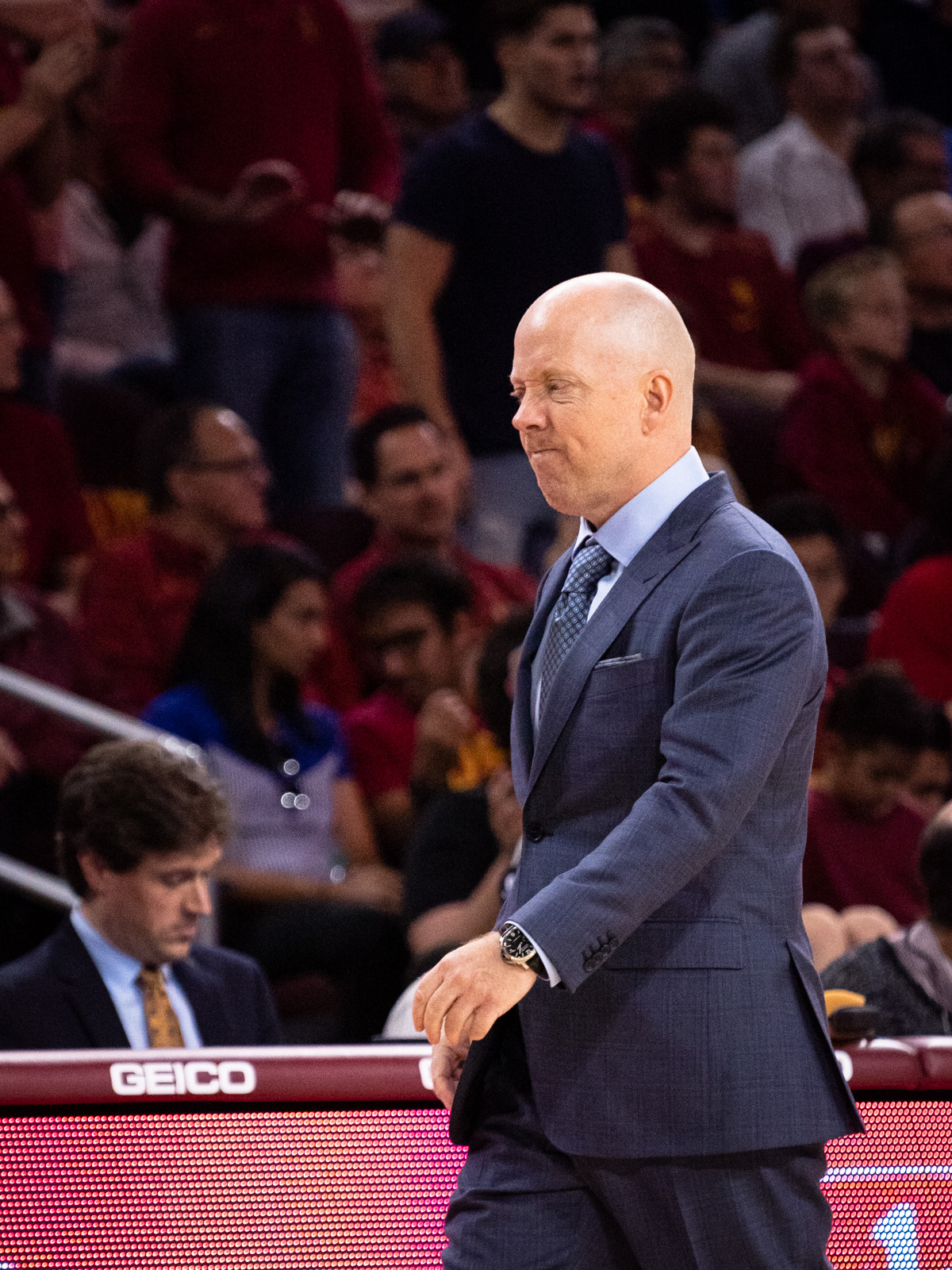 UCLA men’s basketball took a one-point lead with nine seconds to play, but USC hit a last-second shot to steal back the win. Coach Mick Cronin and the Bruins suffered their first loss since Feb. 6 in the defeat. (MacKenzie Coffman/Daily Bruin senior staff)

It required last-second heroics, but the Bruins’ seven-game winning streak is over.

After allowing the Bruins to take a one-point lead on a pair of free throws from redshirt sophomore forward Cody Riley with nine seconds to play, the Trojans put the ball in the hands of their captain – senior guard Jonah Mathews.

Mathews brought the ball up the floor and had redshirt sophomore forward/center Jalen Hill switched onto him after a high screen. Despite Hill contesting the shot with his 6-foot, 10-inch frame, Mathews rose up and knocked down a stepback 3-pointer with just one second remaining to ice the game.

“We knew they were (going to Mathews),” Cronin said. “We made sure we switched our biggest, most athletic guy on him. Gotta give that guy credit now – he made a step-back three over (Hill).”

Junior guard Chris Smith was not on the floor for USC’s final possession after fouling out a few plays prior. Smith – who might have been the player matched up on Mathews if he hadn’t fouled out – said it was just as difficult to see the final shot go in from the bench as it would have been from the floor.

“It would have been hard if I was on the court or off the court,” Smith said. “It didn’t matter, we lost.”

Entering Saturday’s matchup, UCLA hadn’t lost a game in which its opponent scored 73 points or less. Despite holding the Trojans to just 41.2 percent shooting from the floor, the Bruins finished the contest at a season-low 31.4 percent.

Mathews and forward Onyeka Okongwu did most of the damage for USC, combining for 35 points on 13-of-25 shooting. Okongwu also scored 14 of the Trojans’ first 30 points.

Riley said guarding the former McDonald’s All-American was a challenge, but nothing out of the ordinary.

“He’s a big fella, he’s a big guy, pretty athletic,” Riley said. “It was just another challenge, another player I have to guard.”

The Bruins held Okongwu to two points in the final 14 minutes, and his two missed free throws, with 27 seconds left, set up UCLA’s potential game-winning possession. The Trojans came up empty on that trip, but they still managed to hit six of their final seven shots from the field.

Neither team trailed or led by more than five points for the entire contest.

The Bruins will now turn their attention to the Pac-12 tournament starting Wednesday in Las Vegas. While UCLA has already secured a first-round bye, it will not be able to claim the No. 1 seed, which will belong to No. 13 Oregon.

“I told the guys in the locker room, I said, ‘I don’t know who we’re playing yet, but I feel bad for them because they’re gonna get pummeled,’” Smith said. “I don’t know what else to say, but we’re taking this all out on them, I don’t even know who it is.”

The Bruins can still earn a share of the Pac-12 regular-season title with a Ducks loss Saturday night.