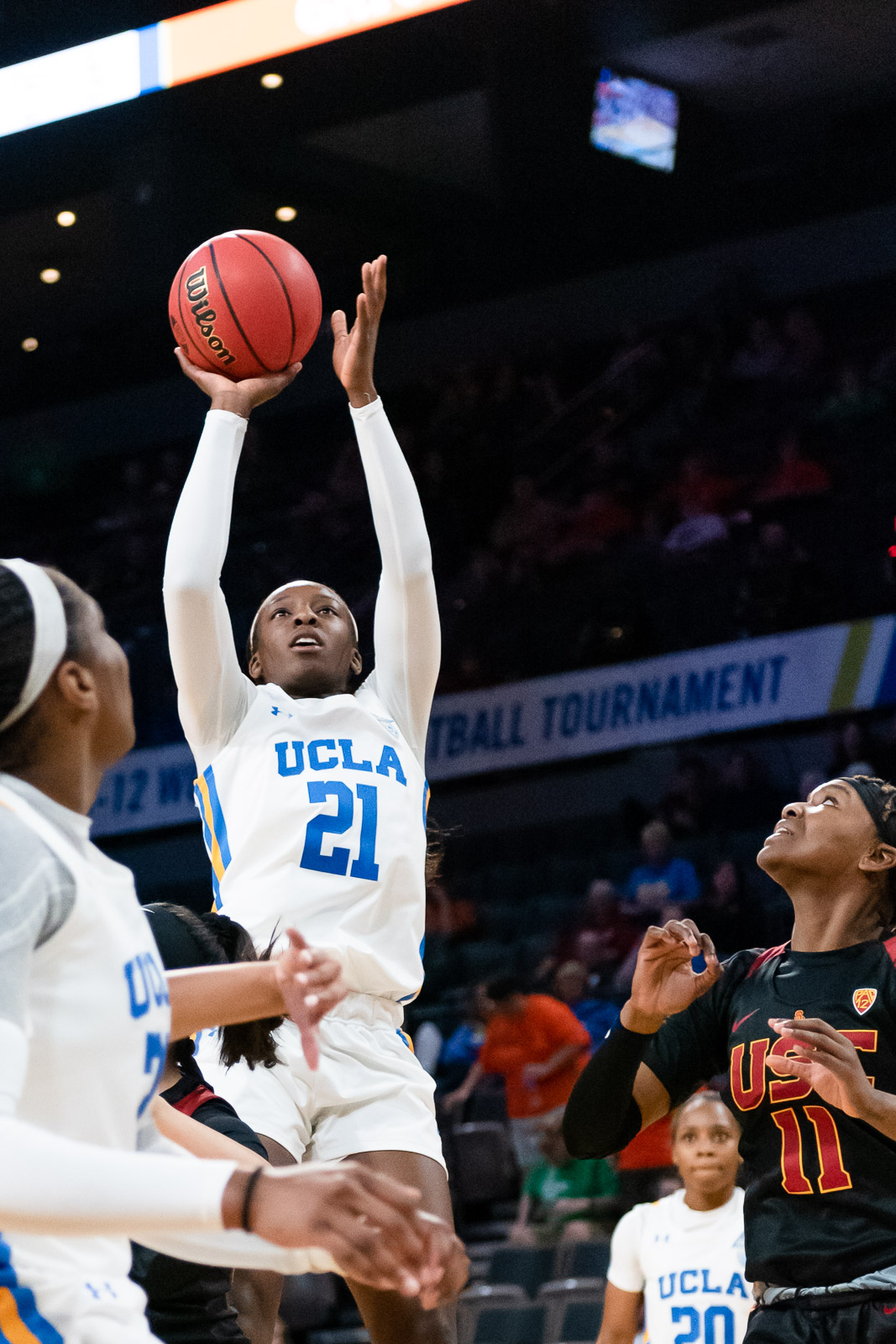 Junior forward Michaela Onyenwere put up 26 points on a season-high 27 field goal attempts in No. 2 seed UCLA women’s basketball’s win over No. 7 seed USC in the second round of the Pac-12 tournament. (Lauren Man/Daily Bruin)

LAS VEGAS — Junior forward Michaela Onyenwere, UCLA’s leading scorer this season, took the first five shots for the Bruins and missed them all.

But she didn’t stop shooting and finished the night with a season-high 27 field goal attempts and 26 points.

“(Onyenwere) continues to amaze me by how she improves and how she’s always about the team,” said coach Cori Close. “She’s just one of the most versatile players in the country.”

With the Bruins down six heading into the fourth quarter and facing elimination, Onyenwere scored the first 10 points for the Bruins in the final frame. The forward also had her second-best rebounding outing of the season, hauling in 15 boards, including six offensive for her 10th double-double of the season.

“(We were) just continuing to fight, string along stops,” Onyenwere said. “We weren’t really playing the way that we knew we could kind of the whole game.”

USC scored 11 straight points to start the contest, leaving UCLA with a significant hole to climb out of.

After missing all seven 3-point attempts in the first quarter, the Bruins converted four of their six shots from deep in the second quarter. Their accuracy from the field improved from 22.7% in the first frame to 62.5% in the second frame.

Redshirt junior guard Natalie Chou had 11 of her 14 points in the second quarter, going a perfect 4-of-4 from the field in the first half. Despite her first-half performance, Chou played only six minutes in the second half.

“I might look back and say what an idiot I was,” Close said. “I’m so thankful for (Chou’s) character, that she was willing to play whatever role to help the team win. I was debating (putting her back in) in my own mind.”

Close said she elected to go with redshirt sophomore Lindsey Corsaro in the second half because of her ability to switch defensively and double-team USC’s offensive threats in the post. Corsaro also chimed in with three 3-pointers – matching the total number of 3s she made in her last 12 regular-season matches in a single night.

“It’s definitely awesome to make shots,” Corsaro said. “I think my teammates do an awesome job, as well my coaches, of always instilling confidence and always talking about when you’ve got it get it up there and be confident.”

Despite shooting 10 percentage points lower from the field than USC in the first half, UCLA managed to take a one-point lead heading into the locker room by hauling in nine offensive rebounds compared to USC’s three.

The Bruins had five turnovers in the third quarter – nearly matching the six giveaways they had in the first half – and shot 26.7% from the field en route to nine points, the only single-digit scoring quarter by either team in the match.

UCLA sporadically employed a full-court press in the first three quarters before switching to it full time in the fourth quarter, with the game clock fading away and elimination on the line.

Close said associate head coach Shannon Perry-Lebeauf was responsible for the tactical defensive adjustment the Bruins made late in the game.

“We were just having them get it in and going one-on-one, but we decided to trap and make them go back to their big,” Close said. “We got a turnover and an and-one that I think really changed the course of the game.”

The elevated defensive pressure forced the Trojans into eight turnovers in the fourth quarter alone, and helped the Bruins score nine straight points to put the game away after the score was knotted at 60 apiece. During the stretch, UCLA forced multiple USC backcourt turnovers that turned into offensive opportunities.

UCLA will face either No. 3 seed Stanford or No. 6 seed Oregon State in the semifinals Saturday evening at 8:30 p.m.