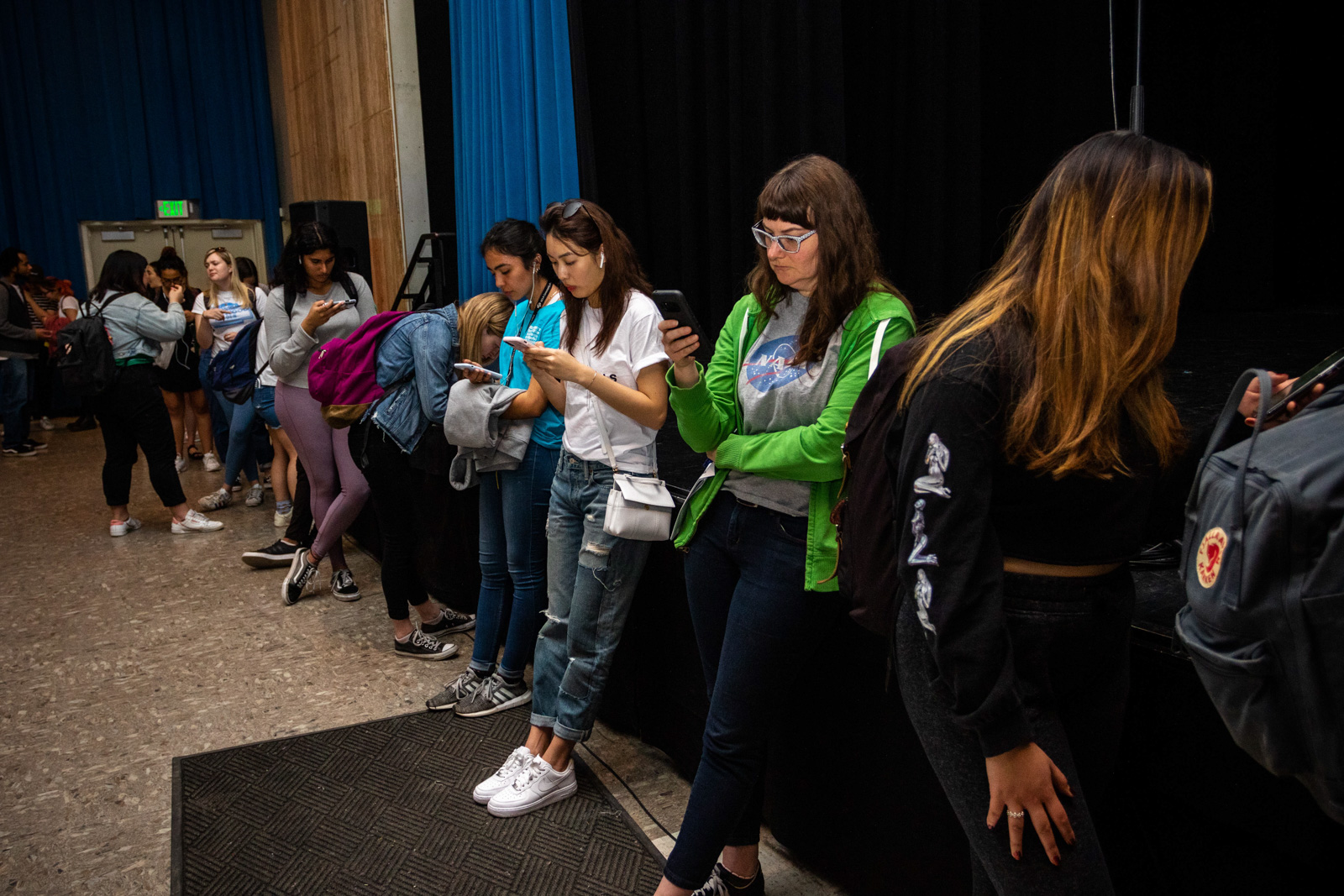 Students wait to vote in the California presidential primary and other ballot measures at the voting center at Ackerman Union. (Jintak Han/Daily Bruin senior staff)

Some students waited four hours at Ackerman Union to vote in the California Democratic primary Tuesday.

The line at Ackerman Union grew throughout the day as students went to vote after classes. Nearby voting centers at Warner Avenue Elementary School – about a 15-minute walk from UCLA – and the Hammer Museum in Westwood, also saw lines multiple hours long at some points in the day, according to several poll workers.

At Ackerman Union, some students registered to vote, others changed their addresses on their registrations, some dropped off their absentee ballots, some ate pizza and all, eventually, voted.

Except for those who didn’t. One poll worker estimated more than 20 students left the polls over the course of a single hour because of the lines.

California implemented same-day voter registration this year. Many of the people in line were registering or using the new policy to change their addresses on their registration form, said Maxine Dalton, a volunteer helping with line management and get out the vote efforts for the California Public Interest Research Group at UCLA and a first-year applied mathematics and economics student.

Voting machines in Ackerman Union went down early in the day and had to issue provisional ballots, but eventually the machines began working again, said Joshua Avila, co-director at BruinsVOTE! and a third-year political science student. The voting system at Warner Avenue Elementary School also crashed.

Despite it all, many students ultimately cast their ballots in Ackerman Grand Ballroom.

Some students were driven by a sense of civic duty. Others decided to vote because others couldn’t.

Miranda Le, a second-year human biology and society student, said she voted on behalf of those who are not able to cast their own ballots, such as undocumented immigrants.

“I feel like it is my civic duty as an American to vote, and I just want a better future for everyone in the country, not just the upper 1%,” Le said.

Friends played a part in the decision, as did social media. For example, seeing promotions and reminders about Super Tuesday everywhere motivated Hannah MacKenzie, a first-year biology student, to vote.

“A lot of my friends have been posting for almost weeks now,” said Andy Goh, a first-year computer science student. “Today, they’re like, ‘Oh, my God, go out and vote, go out and vote.’ And I’m like, ‘All right, you know what, since I’m registered and all.’”

Several students said they voted because their teaching assistants were offering them extra credit.

Visitors from outside campus arrived to raise students’ spirits and keep them at the polls. Heather Matarazzo, known for her role in “The Princess Diaries,” handed out water to students in line.

The poll workers didn’t expect the long lines. More than 20 students left the polls over the course of a single hour because of the lines, one poll worker said.

Thorp had first tried to vote earlier in the day at 5 p.m. and waited for an hour, but then decided to go to the Warner Avenue Elementary School polling center, which she was told had shorter lines. She had a work shift at 8 p.m., she said.

However, after a 15-minute walk to the school, she was told the polling stations were down and were waiting on repairs. She decided to walk back to Ackerman Union, drop her shift and wait in the 3-hour line.

Henry Burke, a fourth-year political science student who volunteered at the polls, said he believes the long wait times are tantamount to voter suppression.

“When I was canvassing voters, none of them – if they have work, if they have class – they weren’t able to wait in line for four hours,” Burke said. “A lot of our new voters, they’ve never voted before so they’re already nervous, coming to the polls for the first time. So LA County, having this awful process, is suppressing the votes of students.”

When they tried to send students to voting stations within walking distance, students still confronted wait times of 2.5 to three hours, Burke said.

But waiting was worth it in the end, said Jade McVay, a fourth-year bioengineering student.

“I got free food, water and I met people from ‘The Princess Diaries,’ and I got to have my vote cast,” she said. “Ideally, though, there will be a system to make this go a bit faster.”