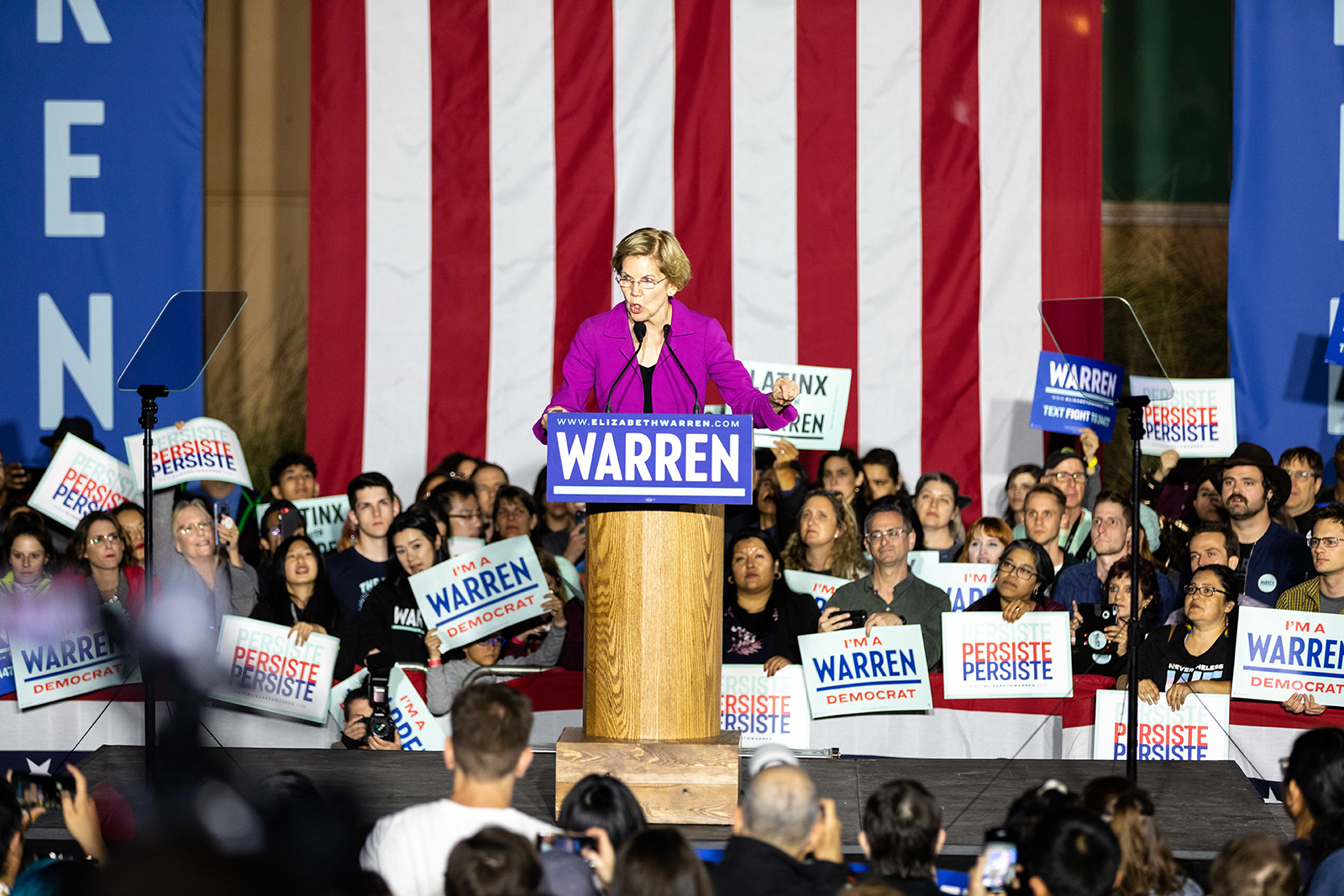 Democratic presidential candidate Sen. Elizabeth Warren spoke to a crowd of more than 3,000 in East Los Angeles on Monday, one day before voters in California, 13 other states and one territory cast their ballots for Super Tuesday.(Jintak Han/Daily Bruin senior staff)

Democratic presidential candidate Sen. Elizabeth Warren returned to Los Angeles for a final campaign stop Monday night before voters in California, 13 other states and one territory cast their ballots for Super Tuesday.

More than 3,000 people gathered at East Los Angeles College to see Warren support Justice for Janitors, a labor movement sparked by 400 janitors in Los Angeles who were beaten by police while peacefully striking in 1990.

“Tonight I’m here to honor Latinas who are unsung heroes of the American story,” Warren said. “Remember the courageous janitors who fought back in 1990? Their legacy lives on. … Janitors are taking power into their own hands and eradicating workplace sexual violence in an industry where immigrant women are especially vulnerable.”

The incident in 1990 launched the janitors’ struggle onto the national stage, winning them better wages and benefits and expanding the movement across the United States and Canada. Many of the janitors’ stories are archived by UCLA’s Justice for Janitors History Project.

Warren said the movement exemplifies the importance of organizing and planning in promoting a common cause for both labor unions and political campaigns.

“The lessons of Latino history are instructive to this moment of crisis,” Warren said. “Our very democracy hangs in the balance. So we can get timid. We can cower. Or we can fight back like the Latina janitors of a generation ago. Me? I’m fighting back.”

Warren held the event in East Los Angeles, which has a majority Latino population. Latinos constitute about 40% of California’s population and form a powerful voting bloc for the state, which holds about a quarter of the 1,991 delegates needed for the Democratic nomination.

Latinos are also an important audience for Democratic presidential candidate Sen. Bernie Sanders, a democratic socialist who also held a rally in Los Angeles a day prior. Despite being neck and neck earlier in the race, Warren has fallen behind Sanders in the last four primary contests.

“I respect his years of service,” Warren said. “(But) nominating someone who wants to restore the world before (President) Donald Trump, when the status quo has been leaving more and more people behind for decades, is a big risk for our party and our country.”

California’s “First Partner,” Jennifer Siebel Newsom, who endorsed Warren on Friday, provided one of the opening remarks for the event. Siebel Newsom’s husband, Gov. Gavin Newsom, has not endorsed a candidate since the candidate he formerly endorsed, Sen. Kamala Harris, dropped out of the race.

“Now, I know a lot of male talking heads on TV have counted (Warren) out,” Siebel Newsom said.

Referring to Chris Matthews, the former host of MSNBC’s talk show “Hardball” accused of political bias, she added, “One was forced to resign tonight.”

Kaitlin Cornuelle, a film producer and director, backed Sanders in the 2016 primary contests but attended Monday’s event to support Warren. Cornuelle said the 2016 presidential race and the media today fundamentally changed America’s elections to disfavor candidates like Warren who appeal more to reasoning than empathy.

However, Cornuelle, who plans to vote for Warren, said Warren’s biggest strengths are her articulateness and command of knowledge.

“She takes complexity, which has been used as a weapon by the powerful for a very long time to make other people feel powerless, and she breaks it down so articulately and well that it’s not a weapon anymore,” Cornuelle said. “She makes everything understandable. She’s like, you can understand it. And if you can understand it, you can change it.”

“I think that she’s more like this is for all of us, like she’s fighting for everyone and not trying to leave anyone behind,” Miller said. “Not that I necessarily think Bernie’s doing that. … I would support any of the nominees that are in (the race) right now.”

Both Cornuelle and Miller agreed that they will vote for the Democratic nominee, no matter who it is, to get Trump out of office.

“Seeing how much under Trump and … how in-depth the neocons and the Republican Party have gone … to uproot and take advantage of our system, the system needs fixing,” Cornuelle said. 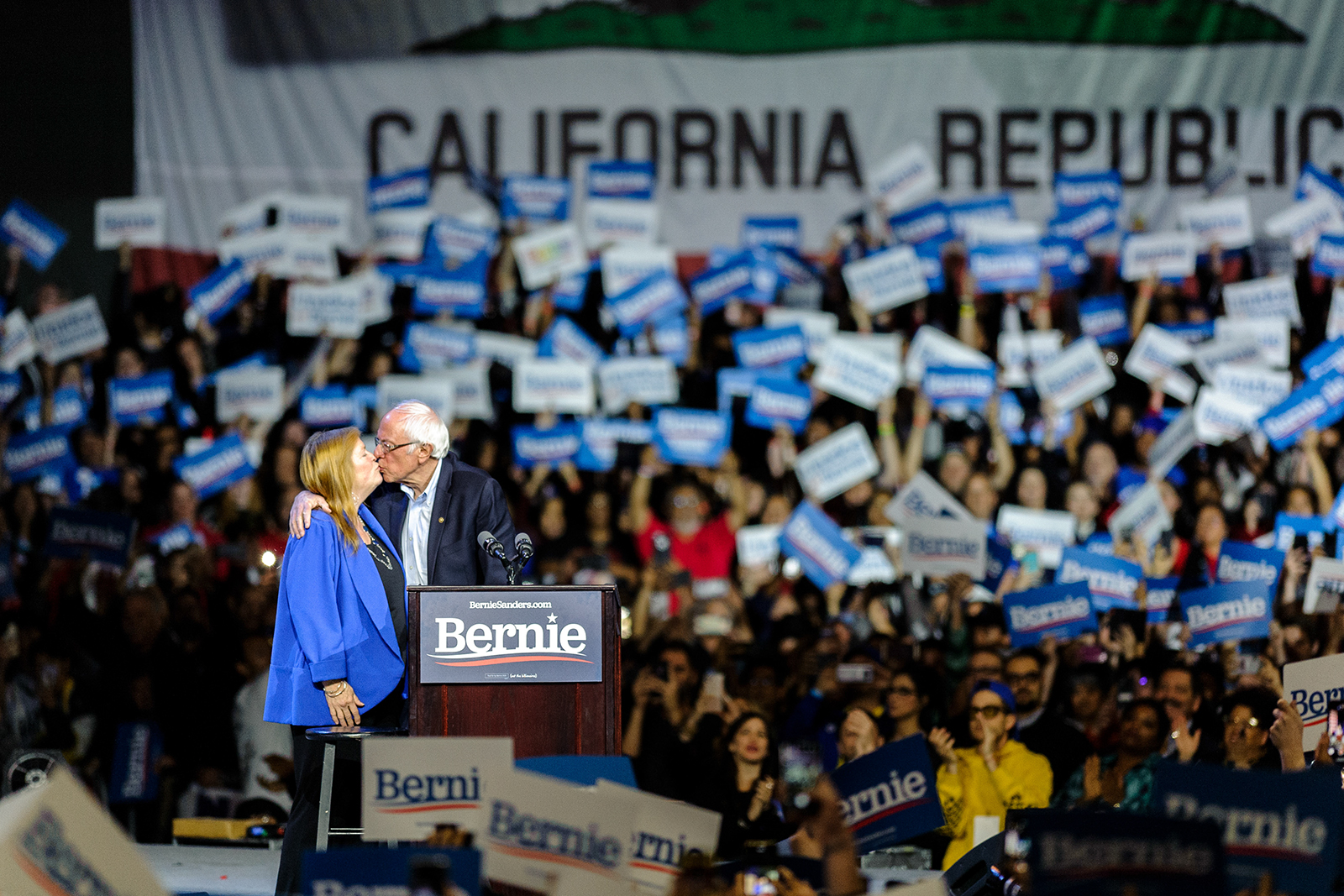 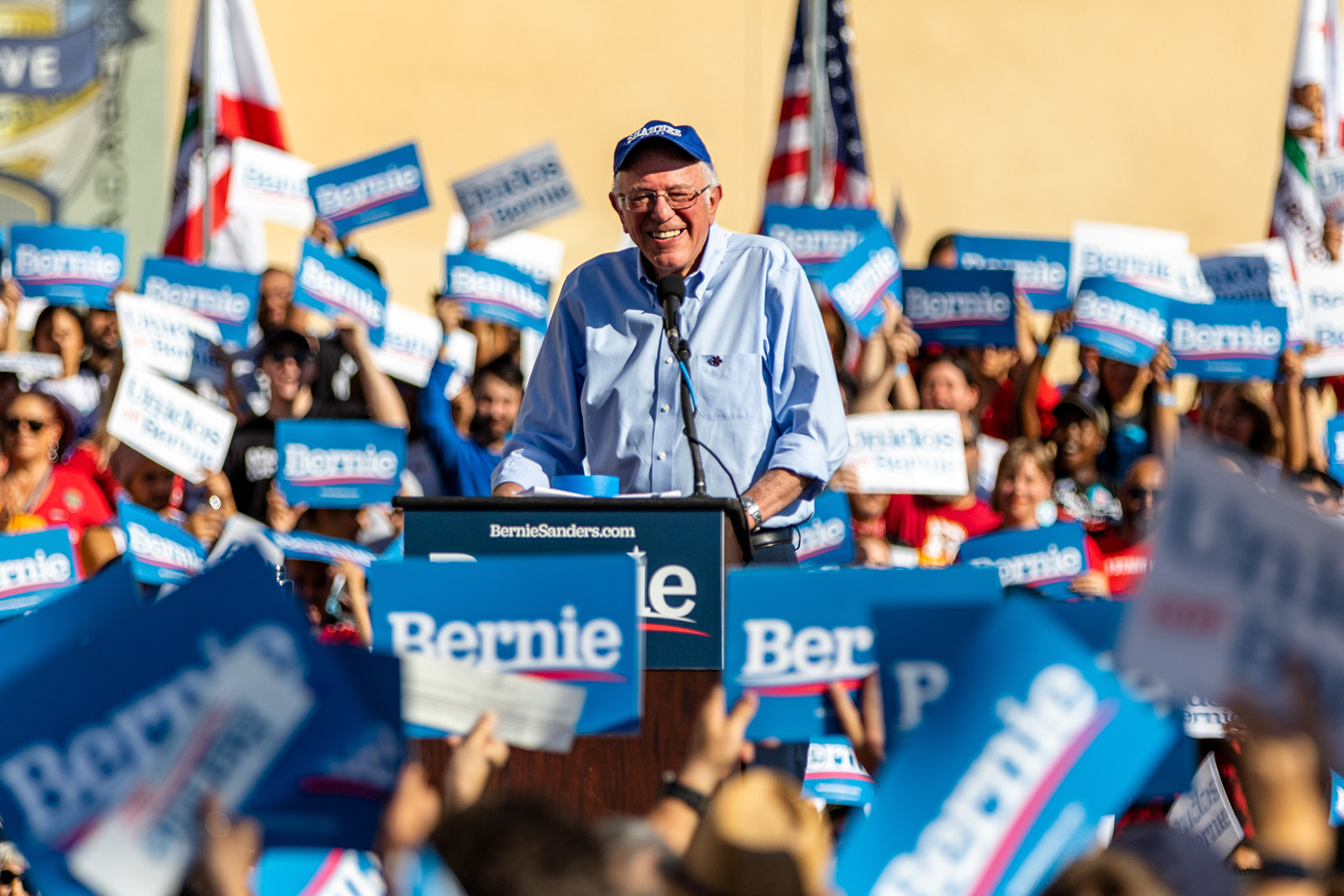 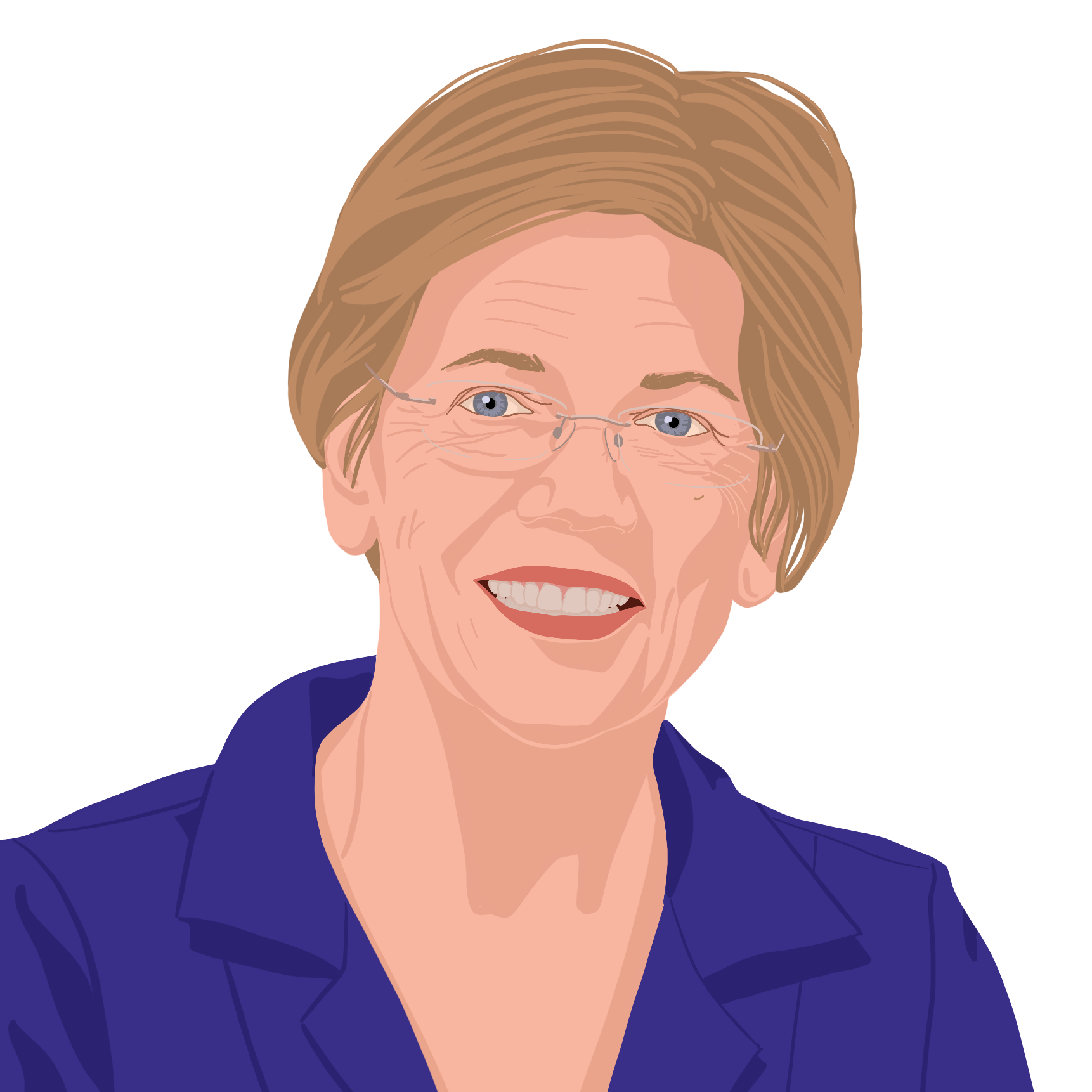 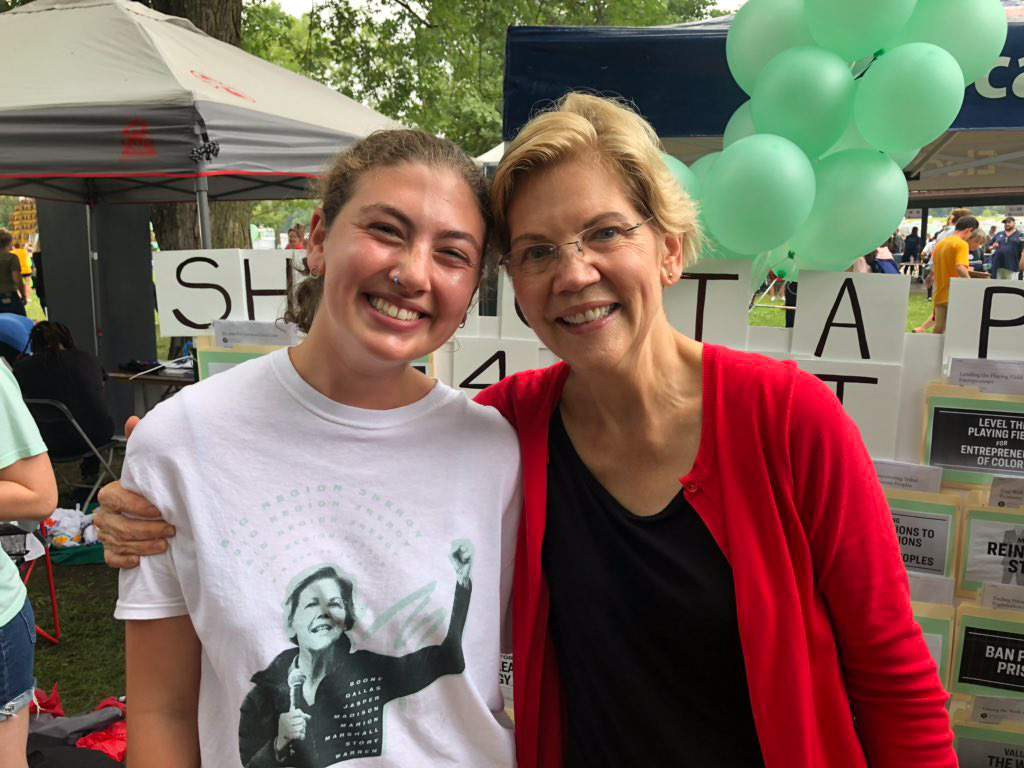