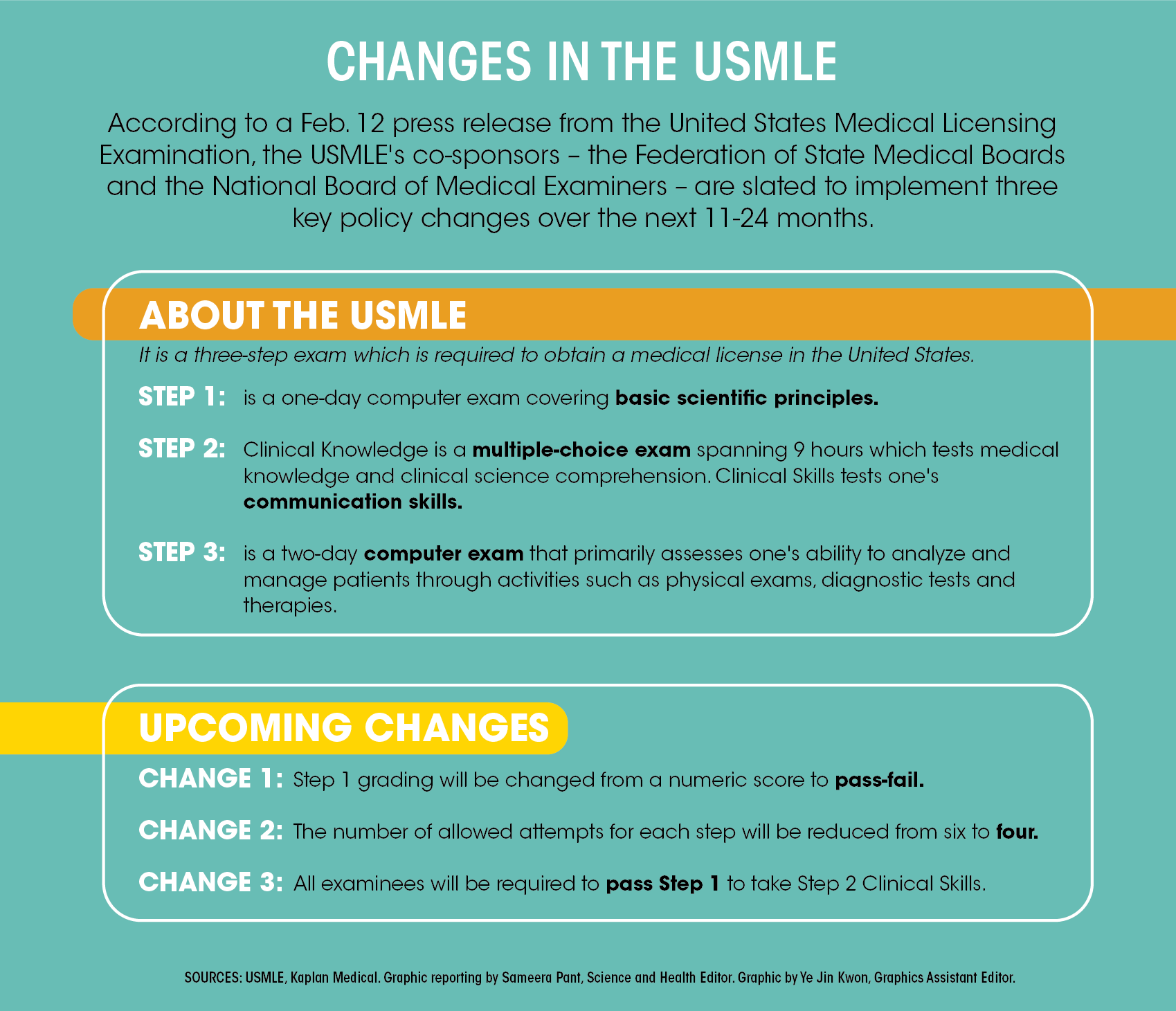 The United States Medical Licensing Examination program, which oversees the three-step exam required to obtain a medical license in the U.S., announced Feb. 12 in a statement that the Step 1 exam will transition from a number score to a pass-fail grading system. This could make other aspects of medical students’ applications for residency more important and could also allow for a more holistic application process, according to UCLA faculty and students.

The Federation of State Medical Boards and the National Board of Medical Examiners, the co-sponsors of the exam, also decided to change the maximum number of attempts for each Step or Step Component exam from six to four. Additionally, the program will now require examinees to pass Step 1 before taking the Step 2 Clinical Skills test, according to the statement.

The program plans to implement the changes over the next 11 to 24 months with the pass-fail change taking place no earlier than January 2022.

The earliest class of students that will be affected by the change will start medical school later this fall if the Step 1 change is implemented in early 2022.

Step 1 focuses on basic scientific principles rather than clinical applications, and students usually take the test toward the end of the first two years of medical school, said Alice Kuo, a professor, chief of medicine-pediatrics and director of the Combined Internal Medicine and Pediatrics Residency program at UCLA.

Students need to pass Step 1 before they are allowed to continue to the clinical years of medical school, and the number score is usually included in residency applications. The Step 2 exam, which students take between their third and fourth year of medical school, has a Clinical Skills and a Clinical Knowledge component, with the former already being a pass-fail score and the latter continuing as a number score, Kuo said.

Step 3 is taken after earning a doctor of medicine degree and completing one year of residency, Kuo said. Step 3 is required to apply for a medical license and confirms residents’ abilities to treat and manage sick patients with a year of experience.

Divya Devineni, a fourth-year anthropology student who was recently accepted to several medical schools, will be part of the first class affected by the change. She said she initially felt relieved about the switch to pass-fail.

Her brother already has taken the Step 1 exam, and Devineni said she noticed him feeling overwhelmed while preparing for the test throughout almost his entire second year of medical school.

“When he was preparing, it was pretty stressful to the point that the school gave everyone almost a month off just to study for the test,” Devineni said. “There was just so much content and so much raw material that he had to know.”

Devineni said the Step 1 number score is often a defining factor for gaining acceptance to a medical residency after graduation, so the switch might eliminate the pressure of needing a high score to land specialties that are considered more competitive, like surgery.

However, Devineni said she later began to feel stressed out because there will be more emphasis on other aspects during her time in medical school.

“I’m scared that medical school is going to turn into undergrad 2.0. … What do we do now to differentiate ourselves for certain specialties?” she said. “I’m just scared now everyone is going to have to do triple the amount of hours of research or extracurriculars or everything that we did in undergrad outside of school.”

On the other hand, without as much focus on the Step 1 score, incoming students can focus more on their actual classes and learning how to become a better doctor, said Sahar Ashrafzadeh, a medical student who will not be affected by the change.

However, Ashrafzadeh said personal connections might have a bigger hand in deciding medical specialties, since factors like letters of recommendation likely will be more important in the application. Knowing the right physicians can overshadow a medical student’s personal strengths and potential to be a physician, she said.

“If your letter-writers have a connection with a different institution, that can give a person a boost in their application to residencies versus having a score that reflects how well you were able to perform,” Ashrafzadeh said.

While Ashrafzadeh said the pass-fail change could be detrimental for those who might not have the right connections, Kuo said she thinks the switch will foster a more holistic application process to residency.

Kuo oversees the residency application process for her specialty and said becoming a doctor often favors students who come from families with more resources. When it comes to the USMLE Step exams, these students may have access to review materials, which can help them reach a higher score.

“It’s been increasingly more difficult for minority students to become physicians because they just don’t have access to those types of programs, and it all comes down to one number on the USMLE score,” Kuo said.

With the pass-fail change, any examinee who passes is knowledgeable enough to pursue medical school, which Kuo said is satisfactory.

Kuo said she has also heard concerns that without a number score for Step 1, students may feel more pressure to do well on the clinical knowledge component of the Step 2 exam. But since students sit for Step 2 CK near the end of medical school, Kuo said residency programs often do not even have access to the applicants’ scores yet.

Kuo said her program voluntarily decided to blind faculty to all number scores when overlooking residency applications this year, including Step 1 or Step 2 CK if they were already available.

To implement a more holistic scoring process, she said her program looked for medical students who had worked with vulnerable populations and presented themselves well during tougher interview questions, such as how they handle stress.

Even though the application review was more time-consuming without any number scores to refer to, Kuo said her faculty felt more confident about their acceptances because they felt they gave each applicant a fair evaluation.

“This is a huge move for the board to decide to make Step 1 pass-fail,” Kuo said. “I will say those of us who have been advocating for a more holistic review process are pretty happy.”