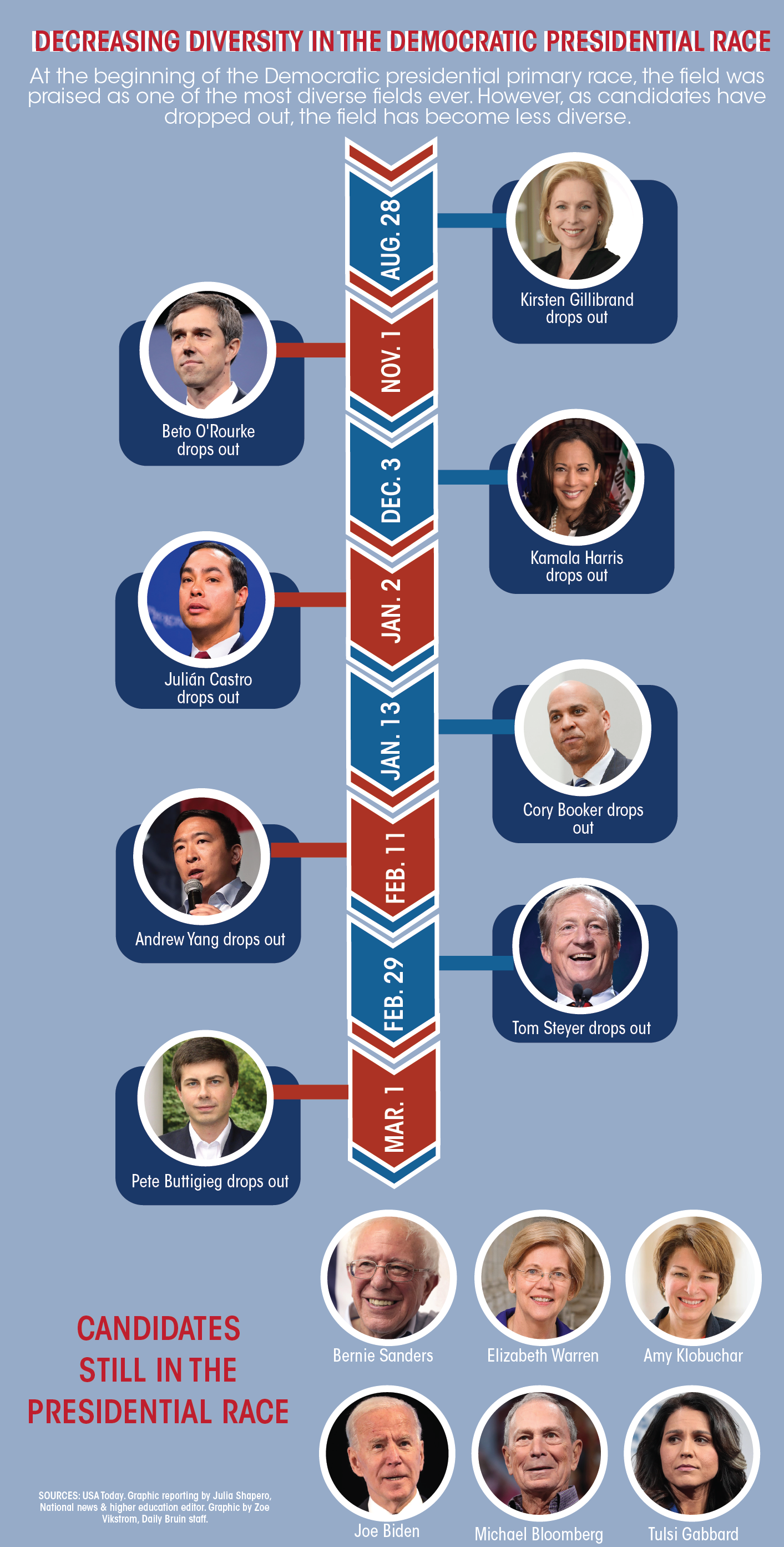 The decline in diversity in the Democratic presidential race reflects inherent issues in the primary process, UCLA faculty and students said.

The primary contest for the Democratic nomination, which started as the most racially diverse in the history of U.S. presidential elections, is now dominated by a top tier of only white candidates. Almost all minority candidates have dropped out of the race.

Even candidates with significant experience and name recognition, such as Sen. Kamala Harris from California and Sen. Cory Booker from New Jersey, quit the contest before the first primaries. Harris, despite her leading position in polls in the middle of last year, told supporters she was ending her campaign in December after failing to raise enough funds to stay competitive in the early primary states.

Businessman and entrepreneur Andrew Yang and former governor of Massachusetts Deval Patrick also announced they were ending their respective campaigns shortly after underwhelming performances at the New Hampshire primary Feb. 11. Their departures leave only one candidate of color in the current race: Rep. Tulsi Gabbard from Hawaii, who is currently polling at less than 1%.

Natalie Masuoka, an associate professor of political science and Asian American studies at UCLA, said the structure of the primary election that has existed for most of modern history has advantaged white voters, leading to less diversity among candidates.

“(The Democratic Party’s) voting base really is a base of communities of color, and that share of the Democratic Party is growing over time, but, of course, there is always a function of power,” Masuoka said. “Swing states are primarily populated by white swing voters, and in that way, the Democratic Party, being a rational actor, really is going to focus on trying to mobilize white voters.”

Furthermore, minority candidates have suffered because of the demographic makeup of the predominantly white early primary states of Iowa and New Hampshire, Masuoka said.

“It definitely is an issue that a predominantly white state gets to go first with an already exclusionary (caucus) voting procedure,” Meara said.

Navkaran Gurm, a second-year public affairs and economics student, said the time commitment required to participate in caucuses is also an obstacle for low-income minority communities.

“I do think (the caucus process) targets minority communities from being as involved,” said Gurm, who is also a member of the Bruin Political Union. “A caucus does require a bigger time commitment from general voters, and not every Democrat living in Iowa has a chance to go to caucuses.”

Saman Haddad, a second-year public affairs student, said he thinks the democratic process is incomplete if minorities are disenfranchised or not represented in the voting process.

“You can’t have a full debate if not everyone’s at the table,” Haddad said. “You can’t say that you’ve really made a decision as a state if not all your citizens are voting or are able to vote.”

Moreover, candidates of color such as Harris and Booker, despite championing causes important to communities of color, had underwhelming support from black voters. Both black and Latino voters have leaned toward candidates such as former Vice President Joe Biden and Sen. Bernie Sanders of Vermont throughout much of the primary contest.

Even at the height of her campaign, Harris was polling at 16% among black Democratic primary voters, trailing 5 percentage points behind Sanders and well behind Biden at 38%, according to a July 2019 Morning Consult poll.

Masuoka said electability is a critical consideration in communities of color – when the alternative is a conservative President Donald Trump administration, some voters of color might consider voting for candidates closer to their interests instead of candidates of color, who are typically considered less likely to win key swing states in a contest against Trump.

“Electability is an important feature of making sure that their communities’ interests are being heard, especially relative to the current administration,” Masuoka said.

Jordan Barger, a second-year film and television student, said there is some merit to voting for the candidate that a person most agrees with, but how strongly they wish to defeat the opposition is also an important consideration.

The diversity of the initial field may itself have been partly responsible for the failure of any candidate to gain the kind of winning coalition former President Barack Obama gained in 2008, since the vote is splintered between several candidates of color, Masuoka said.

However, students expressed optimism about the remaining candidates and emphasized their diversity of perspective and identities.

“Of course, Bernie Sanders is a Jewish man, and with the history of anti-Semitism being what it is in this country, that is significant, and Pete Buttigieg is the first openly gay candidate,” Meara said. “The race is still a little more diverse than people give it credit for.”

However, Buttigieg dropped out of the race March 1, further thinning the diversity of the field.

Gurm said he thinks there is still a wide range of ideologies among the candidates that forces them to continually improve their ideas.

“I think there is a diversity of ideologies within the Democratic Party right now … because there’s so many different ideas and so many different candidates in the field,” Gurm said. “They’re all pushing each other to be better and to defend their policy ideas and policy goals.”

Barger added that she thinks it is particularly important for younger generations, like college students, to vote in the primary elections.

“Our generation is the biggest generation right now,” Barger said. “If we all actually voted, we could make a difference.” 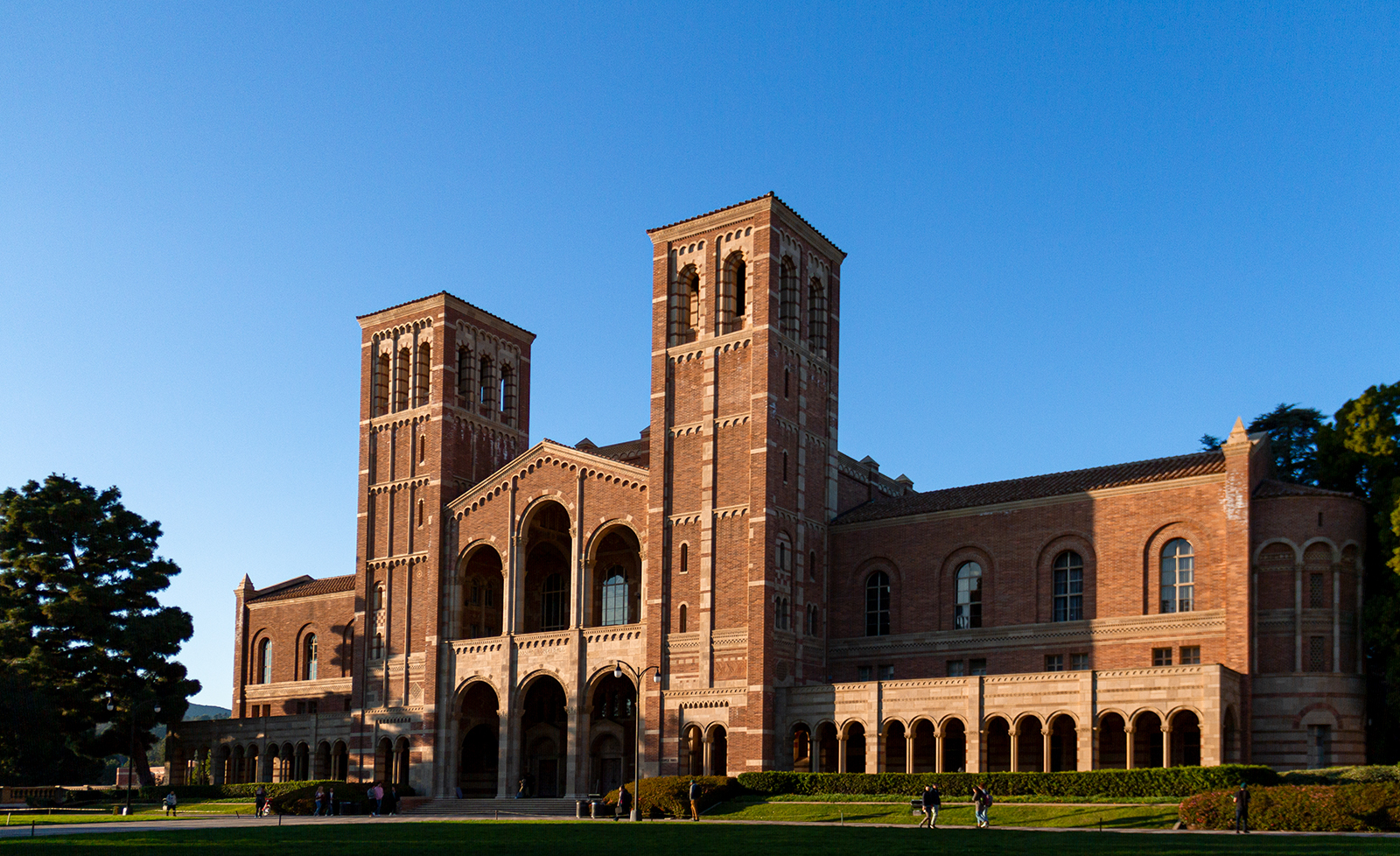 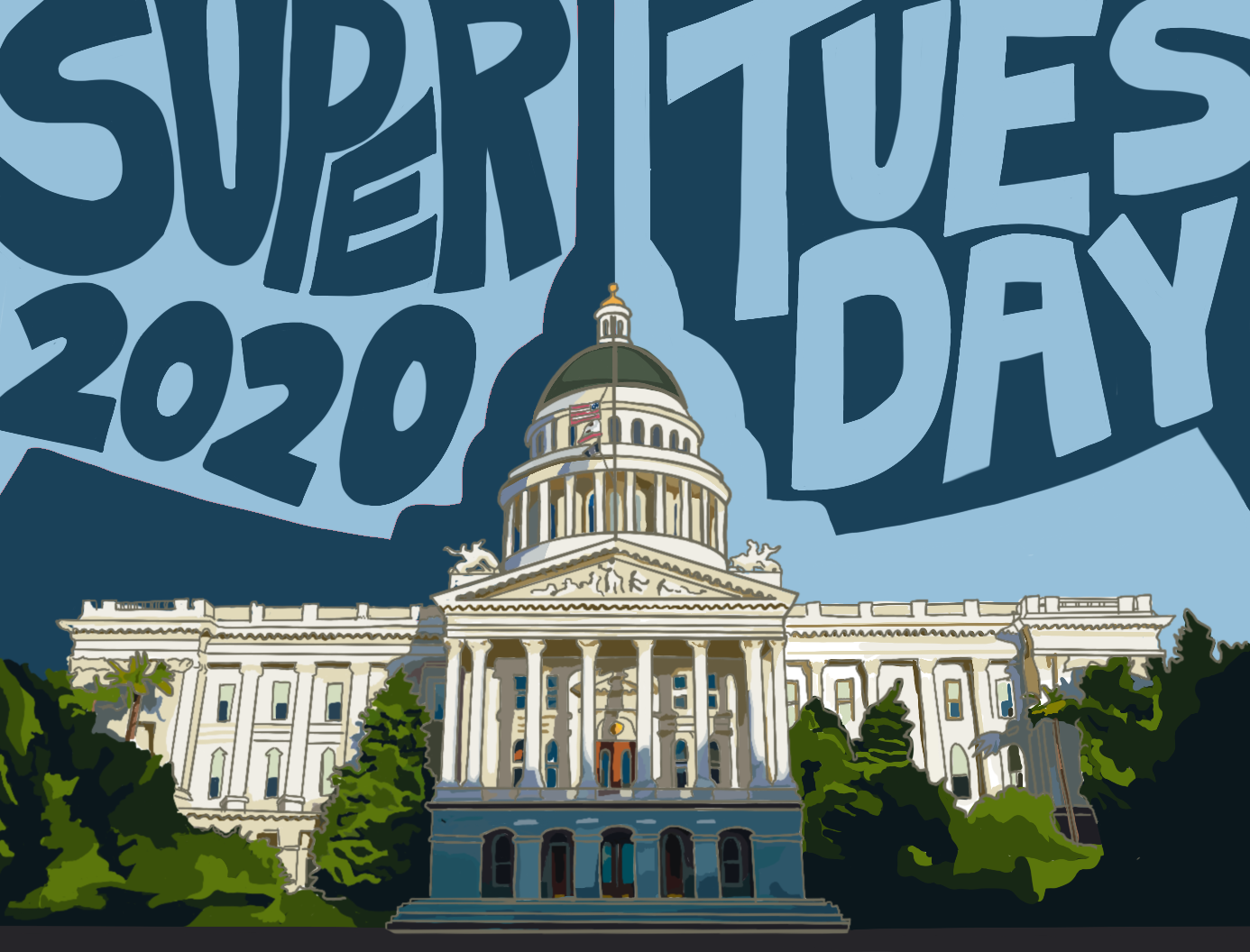