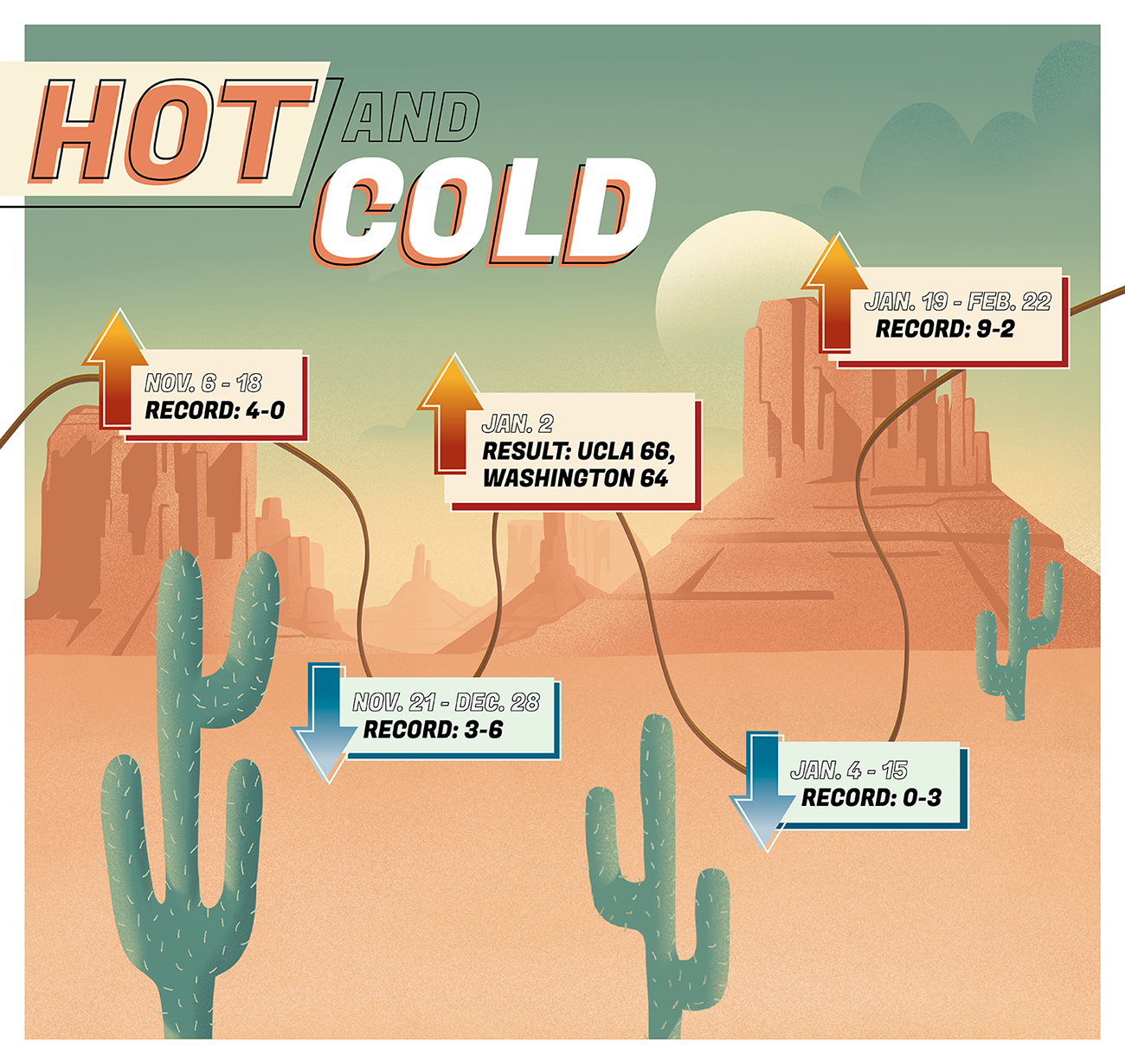 By Jacqueline Dzwonczyk and Sam Connon

UCLA men’s basketball’s (18-11, 11-5 Pac-12) season has been defined by stretches of extremes in coach Mick Cronin’s first year at the helm. UCLA is currently one of the country’s hottest teams, but the Bruins’ entire campaign has been swapping back and forth between confidence-inspiring winning streaks and world-ending losing streaks.

Heading into a matchup with one of the conference’s top teams against Arizona, UCLA has won 10 of its last 12 contests, while the Wildcats enter the game 8-4 over that same stretch. One of two Bruin teams could show up to Pauley Pavilion on Saturday – the hot one or the cold one.

The Bruins were allowing 60.3 points per game through their first four contests, good for their best defensive start to a season since 2010. It wasn’t a perfect stretch to open the year, but Cronin’s signature top-tier defensive production was on full display.

UCLA trailed at the half against both Long Beach State and UC Santa Barbara, but the Bruins were able to stage second-half comebacks in both games. In its next two games against UNLV and Southern Utah, however, UCLA took double-digit leads into halftime, and it was starting to seem like Cronin’s squad could play complete games from start to finish.

Junior guard Chris Smith was averaging 15.5 points per game after his then-career-best 20-point outing against Southern Utah. Two other Bruins – redshirt sophomore forward/center Jalen Hill and sophomore guard Jules Bernard – broke the 20-point threshold during these games as well, showing Cronin he had several trustworthy options to turn to on offense.

Redshirt freshman guard Tyger Campbell was averaging an even five assists per game, and it seemed like he was settling into the role of floor general earlier than anyone had expected after missing the entire 2018-2019 season with a torn ACL.

Things went downhill soon after, but there was a lot to be hopeful about.

The holiday season was especially cold for the Bruins, who barely managed to escape nonconference play with a winning record despite facing just one ranked opponent.

After starting 4-0, UCLA took a sharp turn in the wrong direction with a home loss to Hofstra that came after the Bruins had led by as many as 13 points. The offense put up 78 points in the contest – a then-season-high – but the defense logged just one steal after averaging 8.8 across the first four games, allowing the Pride to go 12-of-24 from deep.

UCLA followed that up with another double-digit loss to BYU at the Maui Jim Maui Invitational. Once again, the Bruins had been in the contest – holding a one-point lead midway through the second half – but scored just 11 points in the final 11 minutes to post a then-season-low 63 points.

It seemed like things were evening out for the Bruins, as they posted wins over Chaminade, San Jose State and Denver while falling to Michigan State, Notre Dame and North Carolina – all of which were to be expected.

But in UCLA’s final nonconference game, it lost to Cal State Fullerton, which gave the Titans their first win over a Power Five team since 2011 and marked the second time in program history they had defeated the Bruins.

The Dec. 28 loss meant UCLA hadn’t won a game in 20 days and would head into Pac-12 play riding a three-game losing streak.

The loss to the Titans was seemingly the nail in the coffin for the Bruins’ season, but a flicker of hope arrived at the start of conference play.

Freshman guard/forward Jake Kyman’s career night carried UCLA to a tight victory over Washington, which had been safely inside the AP Top 25 just two weeks earlier. The Huskies went on to lose 11 of their next 14 games, but at the time, the Bruins’ victory seemed like a quality one.

Kyman hadn’t even scored 20 career points across his first nine games in blue and gold, but he put up 21 off seven 3-pointers against Washington. His final triple was a wide-open dagger with nine seconds left on the clock, a shot that immediately started changing the narratives surrounding the Bruins.

NCAA basketball analyst Andy Katz got an exclusive interview with the first-year wing after the game, the Bruins became a significantly more dangerous team from long distance and, most of all, UCLA was technically tied atop the Pac-12.

And while Hill and redshirt sophomore forward Cody Riley combined to haul in just four boards, 23 rebounds from Smith and freshman guard/foward Jaime Jaquez Jr. showed UCLA had a handful of weapons to battle big bodies down low no matter who was on the court.

A win to open conference play was a reminder that the standings essentially reset along with the new year – the Bruins still controlled their own destiny.

Cronin’s decision to strip the players of the “UCLA” on their jerseys in practice the week before seemed to pay off, and the Bruins earned a culture-defining win on the road to open Pac-12 play.

While there were glimpses of hope during the first halves of the next three contests, the Bruins couldn’t pull out a win.

UCLA entered halftime against Washington State with a lead, and against USC and Stanford behind by just two points – but left all three games with another tally in the loss column.

The Bruins held an 11-point lead over the Cougars with 13 minutes to go. However, their 27 total team fouls allowed the Cougars 32 free throw attempts, of which they made 23 across both halves, aiding the comeback win.

UCLA went on to give up its first home loss to USC since the 2015-2016 season, a game in which the Bruins didn’t trail by more than five points in the first half. It was a 25-13 Trojan run early in the second half that buried any hope of a comeback for UCLA.

USC was able to shoot 69.6% from the field in the second half in comparison to its 45.8% clip in the first.

To close out its second three-game skid of the season, the Bruins fell to the Cardinal – which sat at the top of the Pac-12 at the time – at home for the first time in over a decade. Even though the loss came to a more worthy opponent, the fact that it gave UCLA its first losing record since 2016 didn’t help anything.

The Bruins’ 59 points, including just 28 in the second half, were good for a then-season-low, despite three players – Jaquez, Hill and sophomore guard David Singleton – scoring double digits.

UCLA’s inability to play a full 40 minutes of basketball was quickly becoming the season’s narrative, and the Bruins had yet to face the consensus top teams in the conference.

The Bruins have been more consistent over the last month than at any other point in the season – so much so that it might be more than a hot streak.

What started with a win over California – which sat alongside UCLA at the bottom of the conference standings – turned into an 11-game stretch in which the Bruins have defeated then-No. 20 Colorado on Jan. 30, then-No. 23 Arizona on Feb. 8 and then-No. 18 Colorado on Feb. 22.

In its nine most recent wins, UCLA has held its opponents to 70 points or fewer eight times, with the exception of a Washington State game that went into overtime. And while most of the stat lines don’t show dramatic changes, it’s clear something is different about the Bruin defense.

When Cronin came to Westwood, he was clear his game plan revolved around his defensive scheme. Until mid-January, that had yet to be seen.

But since then, the Bruins’ ability to stop even top offenses has allowed them to stay in games that months ago would have quickly become unreachable. UCLA staged come-from-behind wins against Washington State and Washington, forcing 13 and 18 turnovers in those respective contests.

Against the Buffaloes last weekend, the Bruins were able to stage yet another second-half comeback with a 16-1 run, holding Colorado to 26.3% shooting from deep – well below its then-Pac-12-best season average of 38.1%.

Even in UCLA’s matchup with Utah, when it led from start to finish, its defense helped turn 16 Ute turnovers into 17 points en route to an 11-point win in Salt Lake City.

And with the Bruins streaking at the right time, they’ve officially made their way into the bubble for the NCAA tournament. Should it stay this hot down the stretch, UCLA could turn what looked to be a lost season into a surprise March Madness bid. 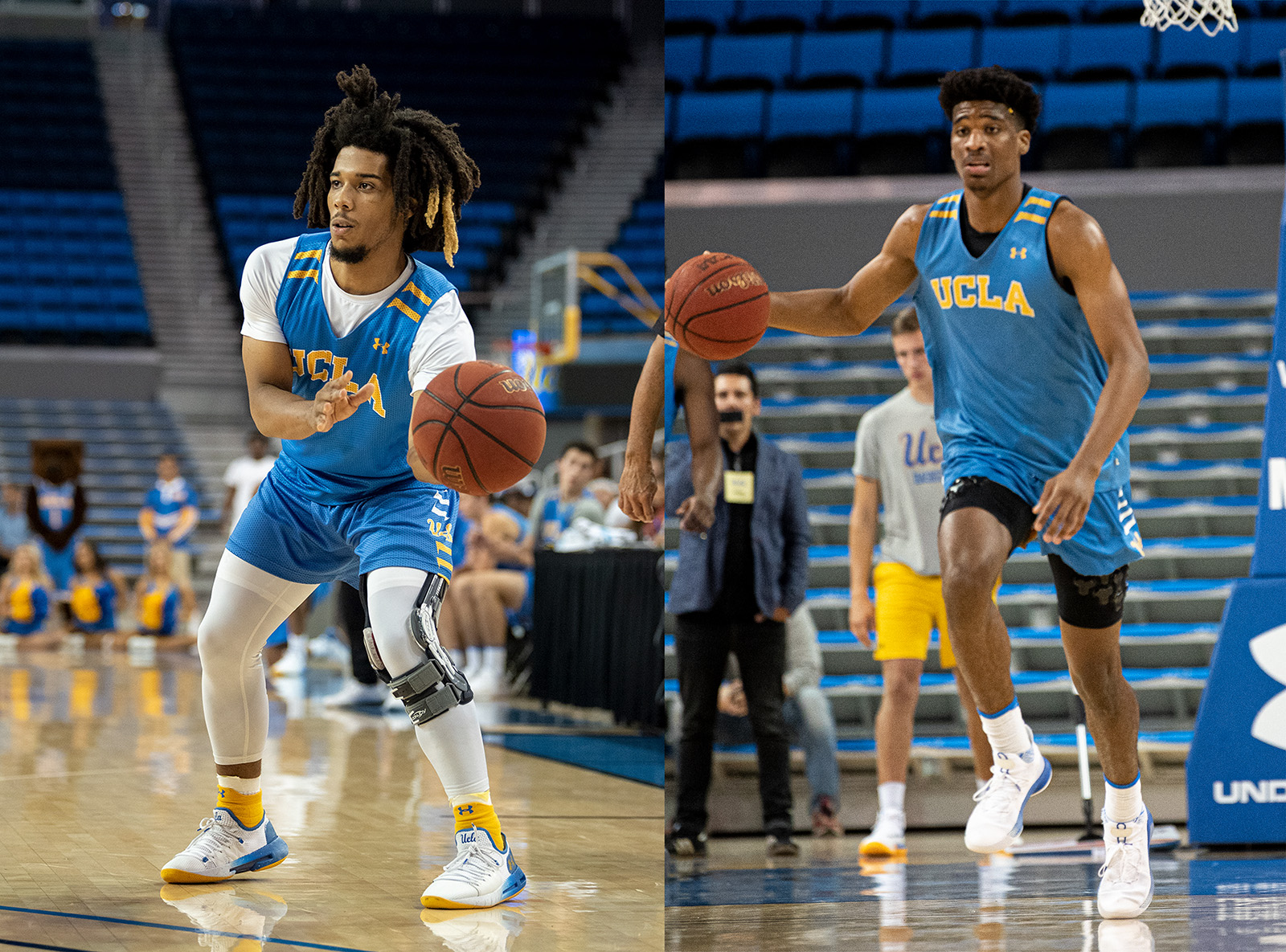 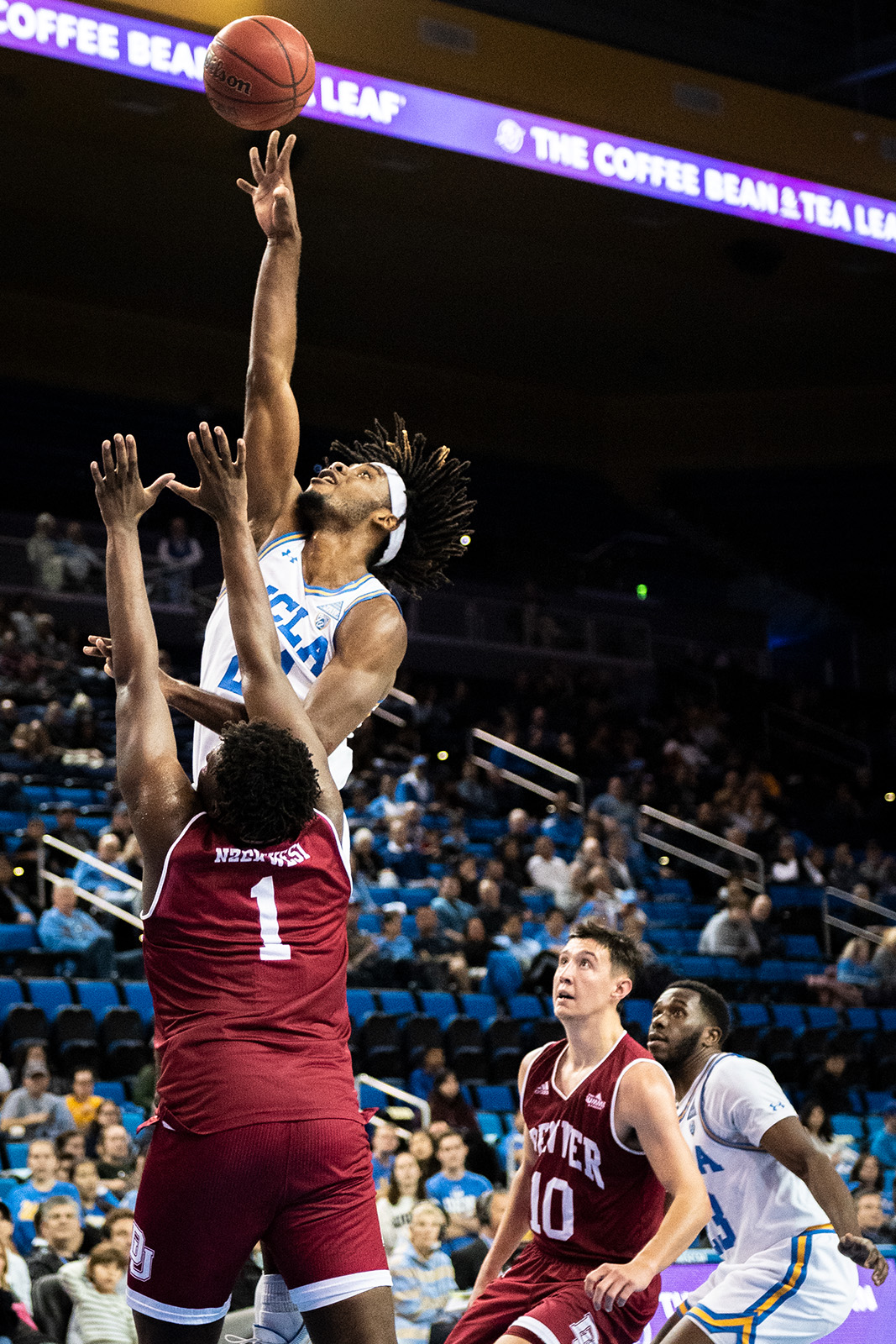