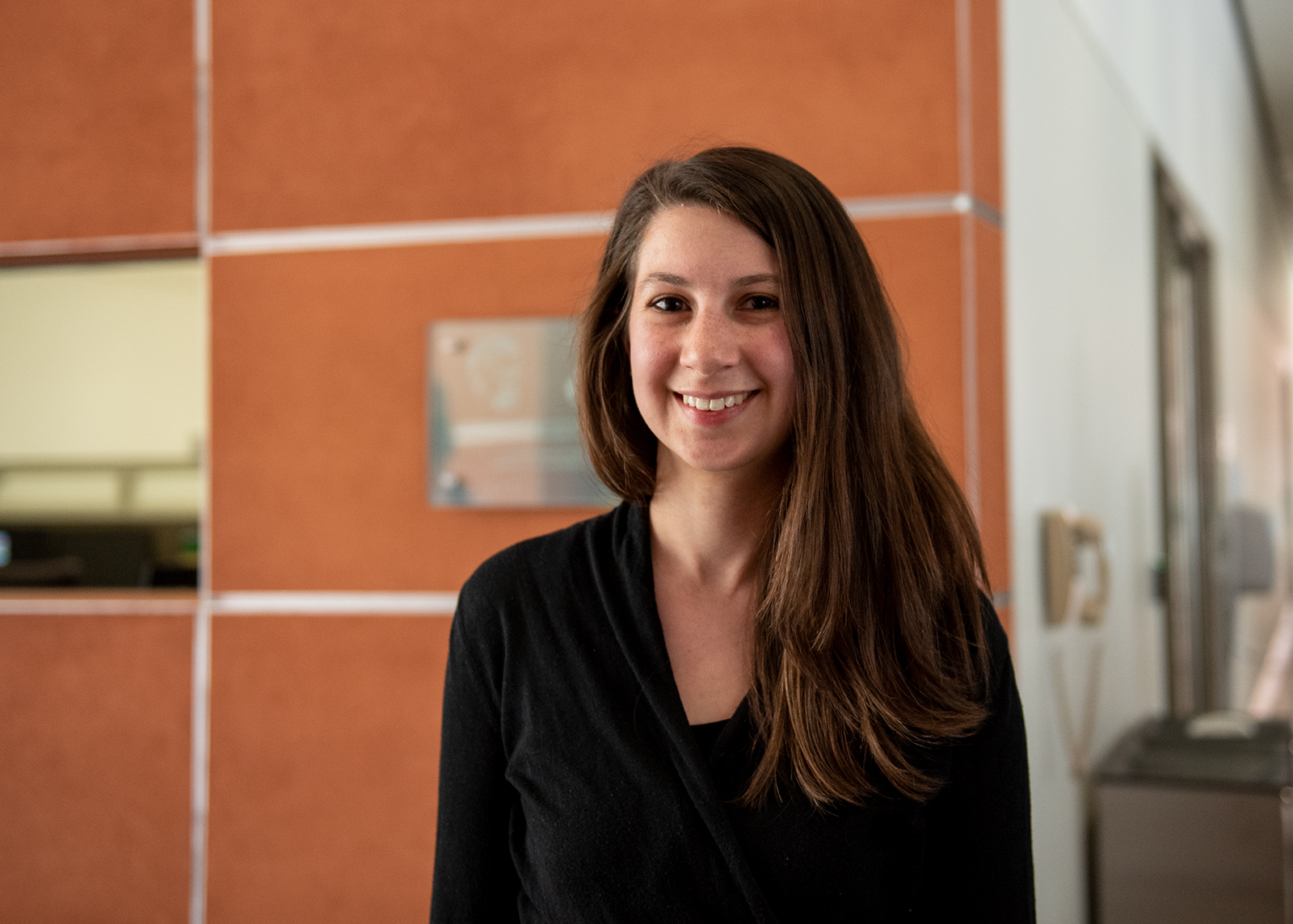 Katie Bouman, an assistant professor in the computing and mathematical sciences department at the California Institute of Technology, is one of the scientists who helped take the first image of a black hole. Bouman spoke about the process Thursday at the California NanoSystems Institute at UCLA.
(Bernard Mendez/Daily Bruin)

Black holes are one of the most mysterious objects in the universe, said Katie Bouman, one of the scientists who helped take the first image of a black hole.

Bouman, an assistant professor in the computing and mathematical sciences department at the California Institute of Technology, rose to fame in April 2019 after helping photograph a black hole for the first time. She spoke at the California NanoSystems Institute at UCLA on Thursday about the process of developing the imaging technology used to capture an image of an invisible object.

Taking a picture of a black hole is very difficult, Bouman said, as no light can escape it and reach scientists’ detectors. However, not all light particles fall into the black hole; some light grazes by it and bends because of the black hole’s gravitational pull, creating a circular shadow on a backdrop of bright material, which scientists can photograph.

“Black holes … are cloaked by an event horizon, (with) extreme gravity (that) prevents light from escaping them,” Bouman said. “Yet the matter that falls into the black hole is superheated … so that before it passes through this boundary it actually shines very brightly.”

Bouman added that mathematical calculations suggest that in order to take a high resolution picture of this shadow of a black hole, scientists need an extremely large telescope.

“This ring (around a black hole appears) very small,” Bouman said. “(It appears) about the same size as a grain of sand when that grain of sand is in New York and we’re viewing it from here in UCLA. … In order to make that picture we need to build a telescope roughly the size of the Earth.”

Scientists can address this problem using a technique called interferometry. Interferometry uses two telescopes that take images at the same time, resulting in a higher-resolution image since the effective diameter becomes the distance between the two telescopes instead of the diameter of a single telescope, Bouman said.

Instead of just two telescopes, they used 10 from all over the world, effectively producing a telescope the size of the Earth, allowing them to image the black hole.

The team was then able to take data from the different telescopes over the course of four nights, Bouman said.

The total size of the data was on the order of petabytes – or 10 to the power of nine megabytes – which was then compressed to a megabyte and heavily analyzed, eventually producing different types of images that all shared common features, Bouman said.

Bouman said they didn’t want their biases to accidentally or subconsciously influence the way in which they designed the computer algorithms to process the imaging data.

“We had to be very careful with the imaging data of a black hole, of something we’ve never seen before,” Bouman said.

Bouman added that they didn’t take an image of the closest supermassive black hole, Sagittarius A*, because it’s very close and evolves in an order of minutes. This means they’d have to take imaging data at a much quicker rate, which is very difficult to do.

“Recovering an image of Sagittarius A* is actually closer to trying to recover a video from the limited data, rather than just a static image,” Bouman said. “We are working on it, but it takes time, and we want to be confident before we publish.”

Therefore the team instead decided to take an image of the black hole at the center of the galaxy called M87, Bouman said. This black hole is big enough for the Earth-sized telescope to see, and it’s far enough that the evolution period is much lower, making data collection an easier affair, she added.

Several students at the event said they were surprised by how effectively Bouman was able to convey the process in an understandable way.

Rodrigo Branco, an atmospheric and oceanic sciences graduate student, said it was interesting to see the topics covered in college and graduate school being applied to real problems.

Krish Kabra, an electrical engineering graduate student, said he thinks Bouman did a great job explaining the physics behind the black hole but also tackling the concept of computational imaging.

Bouman said it’s good to shoot for the stars and take risks while also taking responsibility for the risks.

“Don’t ever hold yourself back. Try to find the thing you find coolest even if it seems impossible,” Bouman said. “I think that there’s a lot of things we can do if we just work together as a team and come up with creative solutions today (to do what) may seem impossible at first glance.”