Study shows students sit too long, would benefit from movement during class 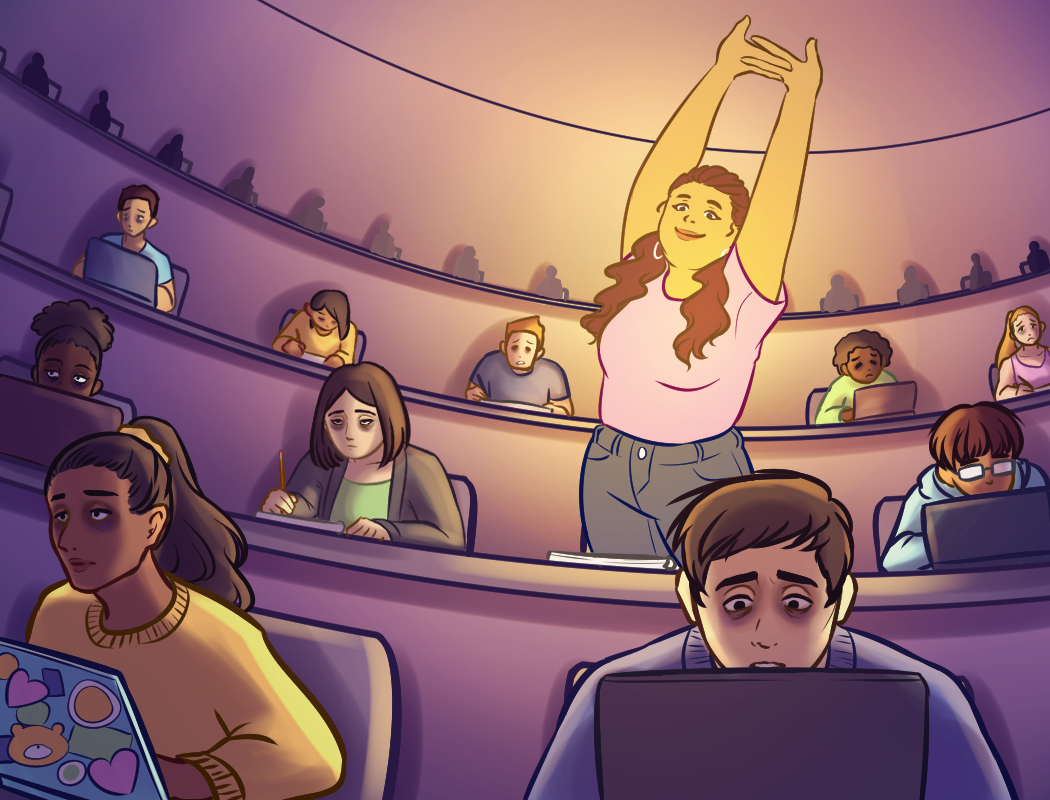 College students sit too much and exercise too little, researchers found in a new collaborative study between professors from the UCLA Department of World Arts and Cultures and the UCLA Fielding School of Public Health.

The qualitative study, which was published in the Journal of American College Health earlier this month, examined answers from focus groups of undergraduate students, graduate students and professors, said Angelia Leung, one of the co-authors of the study and an associate professor emerita in the department of World Arts and Cultures/Dance.

Students reported sitting for eight to 10 hours per day, including in class, during leisure time, work and on their commutes, according to results from the study.

Allowing students to stand up, stretch and move around periodically during class may help improve their alertness, Leung said. However, students may not be likely to do so because it is not socially accepted, she added.

“If you’re sitting and you can’t move or you’re inhibited from moving … because of social inhibitions … your energy goes down, and your concentration goes down,” she said.

A sedentary lifestyle can have negative health consequences, said Burton Cowgill, one of the paper’s co-authors and an adjunct assistant professor at the school of public health. Extended periods of sitting over time can put individuals at a higher risk for heart disease, muscle problems and even some cancers, he added.

“In some of the longer, longitudinal studies, people that are experiencing prolonged bouts of sitting are at a higher risk for all-cause earlier mortality,” Cowgill said.

While this study addresses health drawbacks of sitting for prolonged periods, its main focus was to see how prevalent this problem is and how it can be changed on college campuses, Cowgill said.

“The first thing we learned was we need to educate people more so that they understand sort of the entirety of the issue,” he said.

While some do provide opportunities, UCLA faculty need to help students take advantage of the movement breaks and not simply stay seated and look at their devices or social media, Leung said.

“You’ll see students who are much more willing to be activated,” she said.

This research may inspire educators to look into other obstacles that may impede movement in students’ lives, Leung said. New research could include the perspectives of those who are differently abled, to see what types of initiatives could help them move more, she added.

Universities can help combat this problem in the long term by changing the built environment, including classroom layouts and design, so it allows students and faculty to stand up and exercise more, Cowgill said. For example, new classrooms could include swivel desks which allow students to move.

“We may not want to cram as many seats in a stadium style … classroom,” he said.

Faculty can find other creative ways to promote movement through learning, said Wendelin Slusser, associate vice provost of the Semel Healthy Campus Initiative Center and one of the study’s co-authors. For example, she suggested professors use outdoor resources such as campus gardens to teach students about food and the environment.

“Use the campus as a classroom,” Slusser said.

Observations from the Semel Center inspired this study, Slusser said. The Semel Center consists of multiple expert-led pods with student, staff and faculty engagement, each of which emphasizes one area of health and well-being. The study on standing began in the MoveWell Pod, which works toward providing the UCLA community with resources that can help it maintain an active lifestyle.

“We wanted to get a handle on where people stand on this subject … and sometimes the first place to answer these questions is through these formal focus groups,” she said.

Classrooms could also incorporate instant recess into lesson plans, Slusser added. Instant recess is a term coined by Antronette Yancey, a UCLA public health professor who passed away in 2013. The concept of instant recess encourages individuals to participate in short bursts of physical movement or stretching to combat the negative impacts of a sedentary lifestyle, Slusser said.

Slusser said she hopes professors and students adopt these principles into their daily lives.

“There will be a flip, and that doesn’t cost any money,” Slusser said. “That’s a mindset.”