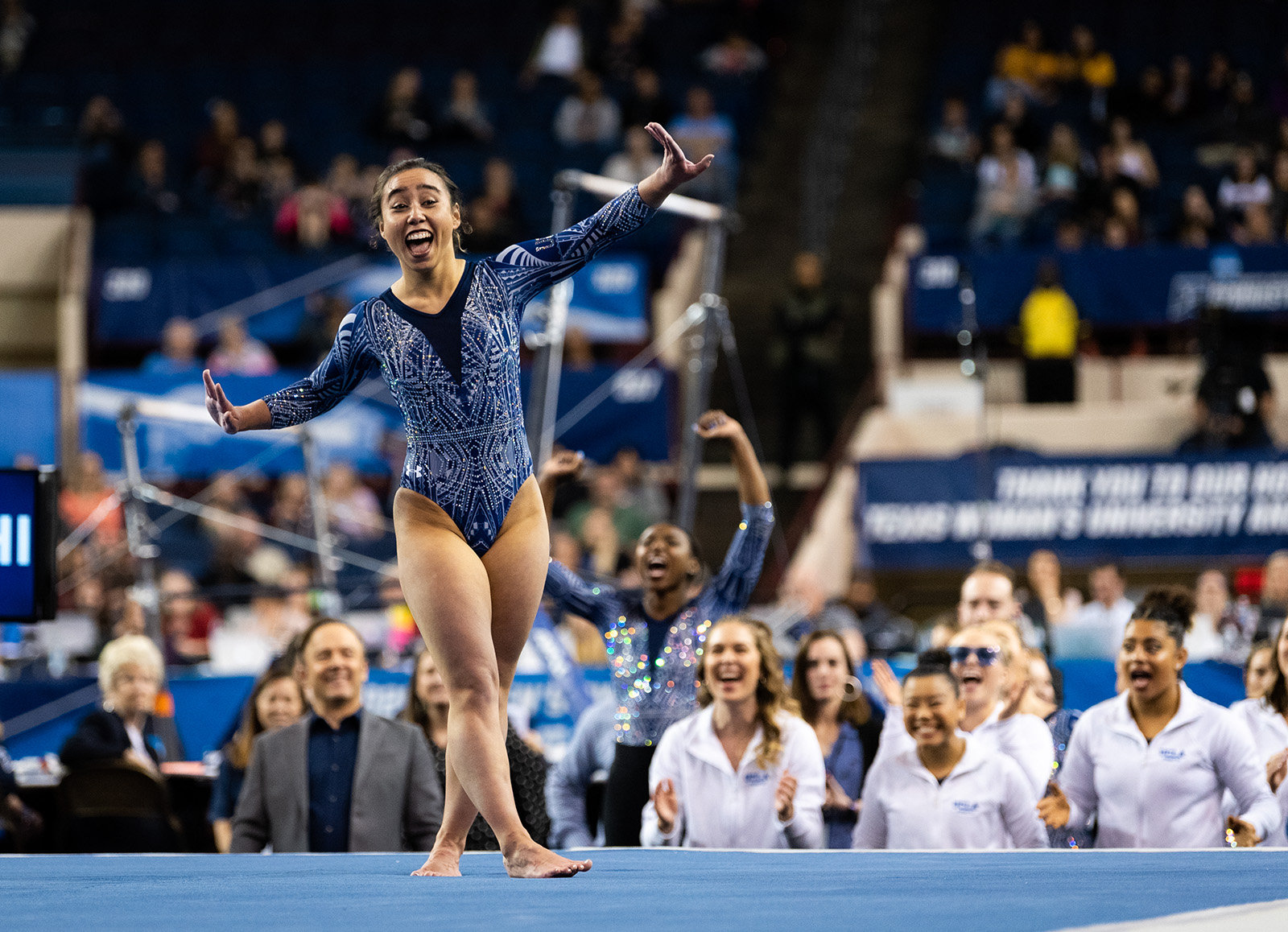 Former UCLA gymnast Katelyn Ohashi competed primarily on floor and beam when she was a Bruin, but tried her hand at playing basketball during the 2020 NBA Celebrity All-Star Game. (Liz Ketcham/Photo editor)

Former Bruin gymnast Katelyn Ohashi said she was thrilled to be included in the 2020 NBA Celebrity All-Star Game.

“I was stoked when I first found out,” Ohashi said. “Then it sunk in and (I) realized I didn’t want to make a fool of myself, and I was so nervous.”

Ohashi graduated from UCLA in 2019 with one NCAA championship title, one NCAA floor exercise title and a degree in gender studies. Over the weekend, she returned to the sports world to compete in the 2020 NBA Celebrity All-Star Game in Chicago.

The 4-foot-10 gymnast brought her own touch to the NBA – completing a cartwheel and two back walkovers in her entrance onto the court.

Although the UCLA alum saw limited playing time in the celebrity match, she did make an appearance in The Female Quotient’s Equality Lounge at NBA All-Star weekend 2020.

Ohashi appeared on a panel called “Industry Impact: How the Next Generation of Female Fans are Shaping Sports Media” on Saturday morning, which also featured four female executives from Wasserman, AT&T, Snap Inc. and the WNBA – some of whom were UCLA alums.

Ohashi said even though she is no longer an active member of the Bruin squad, she still feels like she is representing UCLA when she makes public appearances.

“I do so many things and they all have to do with Bruins,” Ohashi said. “It always reminds me that even though I don’t initially think of it, the ties are so strong within Bruin blood. It’s just cool to be reminded.”

At this time last year – when Ohashi was a senior on the UCLA gymnastics team — the Bruins were ranked No. 2, had surpassed the 198-point threshold once, and had a team average that was more than .500 higher than UCLA’s current average of 197.071.

Although the Bruins took first place in every event and posted a winning 197.200 in Saturday’s meet against Arizona State, No. 3 UCLA (5-1, 3-1 Pac-12) recorded a season-low uneven bars score and its second-lowest vault score – both 49.200.

“Overall, (Saturday’s meet) was not our best,” said freshman Chloe Lashbrooke. “We know that and we need to get together this week and really work on the game plan, so we can be relaxed and we can go all out for our meets.”

In 2019, the Bruins ranked No. 1 and No. 2 on floor and balance beam, respectively – the two events on which Ohashi consistently competed consistently.

This year, UCLA has maintained its No. 1 ranking on floor, but currently owns the No. 22 ranking on beam. The Bruins’ lowest beam team ranking in Ohashi’s four-year collegiate career was No. 4 – Ohashi’s freshman season in 2016.

Ohashi said the Bruins need to adjust their mental preparedness to improve as a team.

“The only thing I think they’re lacking right now is confidence, which takes time,” Ohashi said. “I think that they’re awesome, they just need to believe in themselves (to be dazzling) – really take care of the mind and figure out how to trust themselves.”

UCLA and its next opponent – Utah (5-0, 4-0) – are currently tied in the national rankings at No. 3. However, the only event on which the Utes outrank the Bruins is balance beam, where Utah holds the No. 4 spot.

Coach Chris Waller said UCLA has a mental barrier to cross before it can progress.

“The next step for the whole team is to trust that they don’t have to hold back,” Waller said. “If you go as big as you can, then that’s the way you are going to figure out how amazing you are. It’s literally time to be dazzling – to go all out. That’s the way we can be national championship contenders.”

The Bruins will return to Westwood on Sunday for their tiebreaker competition against the undefeated Utes.