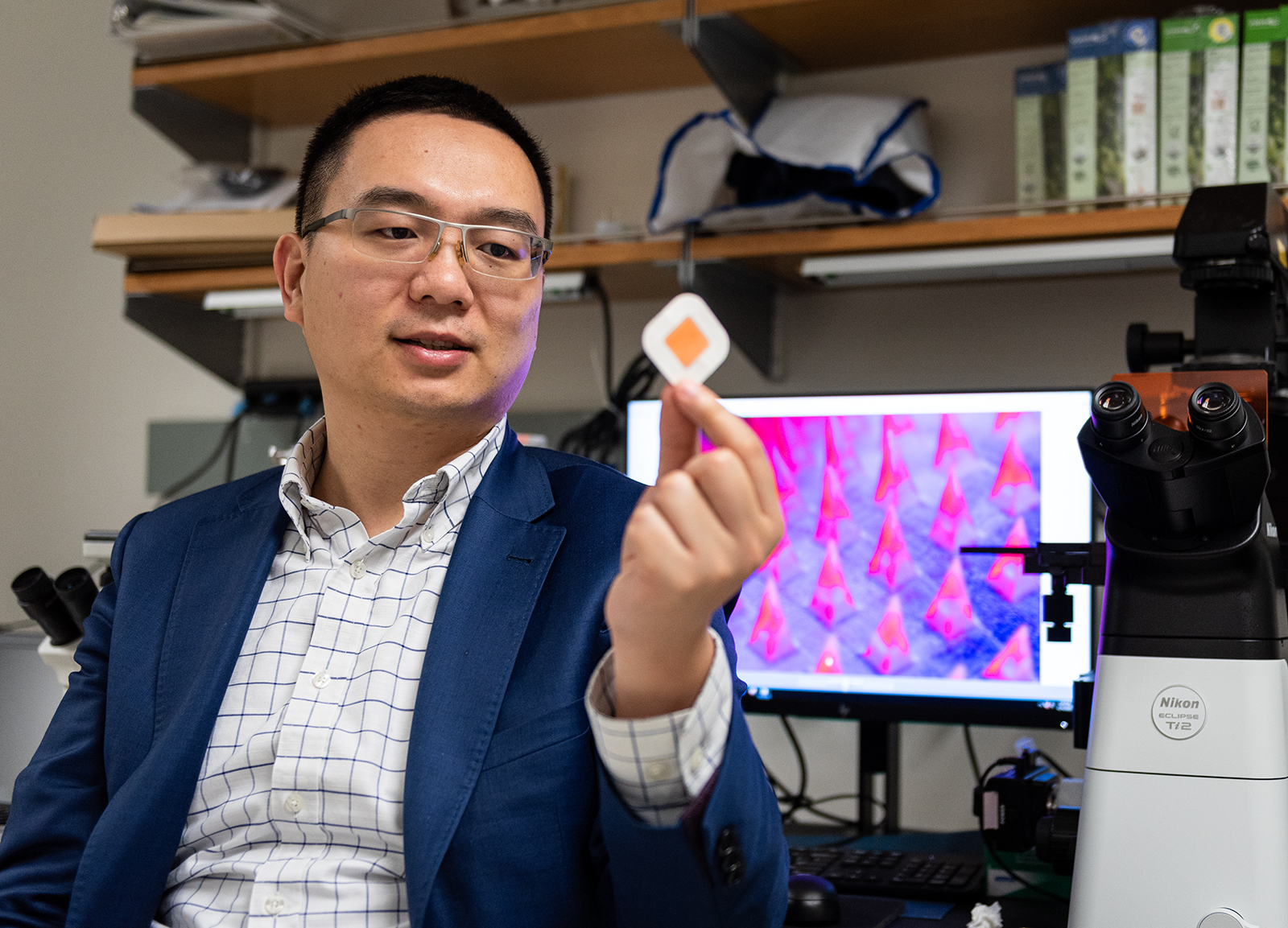 Zhen Gu, a UCLA bioengineering professor, led a research team that developed a smart insulin patch. Typically, patients with diabetes regulate their own blood sugar levels by self-administering insulin injections. The new patch, which is applied directly to the skin, eliminates the need for self-monitoring. (Jason Zhu/Daily Bruin)

Correction: The original version of this article incorrectly stated that the patch is priced at 25 cents. In fact, the patch costs roughly 25 cents to produce.

The patch was developed by a team led by Zhen Gu, a UCLA bioengineering professor, along with researchers from UCLA, the University of North Carolina at Chapel Hill and the Massachusetts Institute of Technology, among other institutions. The quarter-sized patch, which cost roughly 25 cents to produce and can be used for 24 hours, was detailed in a Nature study published Feb. 3.

People with diabetes cannot process glucose, which is necessary for fueling the body’s cells and brain activity, leading to abnormally high levels of sugar in the blood. About 463 million people in the world have diabetes, according to a September study published in Diabetes Research and Clinical Practice.

Typically, patients with diabetes regulate their own blood sugar levels by self-administering insulin injections and drawing their own blood to keep track of blood glucose levels.

The newly developed patch, applied directly to the skin, eliminates the need for self-monitoring. It also delivers tailored, precise amounts of insulin into the bloodstream, directly responding to increases in glucose levels, Gu said.

Each patch is equipped with a matrix of microneedles that reach less than a millimeter into the skin’s surface, Gu said. The needles are made of a polymer matrix that is able to smartly sense and respond to fluctuations in blood sugar, according to the 2020 study.

An increase in blood sugar will trigger the polymer matrix to build negative charges, causing the needle to swell and diffuse preloaded insulin into the patient’s bloodstream, according to the study.

Because of the microneedle matrix, the patch eliminates the need for daily self-administered insulin injections, Gu said. Additionally, the patch delivers a personalized amount of insulin based on a patient’s specific weight and age, he added.

The patch mimics the pancreas and “senses” glucose levels, only releasing the necessary amount of insulin needed for the patient’s glucose levels.

The body cannot produce insulin on its own in individuals with Type 1 diabetes because the immune system has destroyed its own beta cells’ ability to do so.

Conversely, Type 2 diabetes, non-insulin-dependent diabetes, is marked by a resistance to insulin. As a result, beta cells are forced to produce more insulin to maintain a normal amount of glucose.

This patch is one of several developments Gu has worked on for treating diabetes. Gu said he was personally motivated to study diabetes because his grandmother suffered from the disease.

While at UNC in 2015, Gu and his lab developed the first prototype of the smart insulin patch.

“At that moment, we were really excited because this was the first demonstration of this kind of system, combining a glucose-responsive formulation together with the painless microneedle patch,” Gu said.

In 2019, Gu and researchers at UCLA and UNC developed a form of insulin called i-insulin. This so-called “smart” insulin is able to automatically respond to changes in blood glucose levels, said John Buse, a study co-author and the director of the Diabetes Care Center at the UNC School of Medicine.

After discovering i-insulin, Gu said he was compelled to engineer an optimal method for regulating its delivery, which led to the development of the patch.

Thus far, the patch has been tested in mice and a smaller breed of pig, Goettingen minipigs.

The use of the minipig model allowed for a more realistic means of seeing the patch’s effectiveness in humans. Thanks in part to 2017 investments, Gu and his lab were able to begin large-animal studies, which more accurately show the effects in humans because of their increased weight and skin type, Gu said.

The patch was successful at controlling glucose levels in 55-pound minipigs with Type 1 diabetes over a 20-hour period, according to the 2020 study.

The team of scientists and doctors behind the patch is currently awaiting approval from the United States Food and Drug Administration to begin clinical trials. They are optimistic that the patch could be in clinical trials in a couple of years with added applications for other medical issues, Buse said.