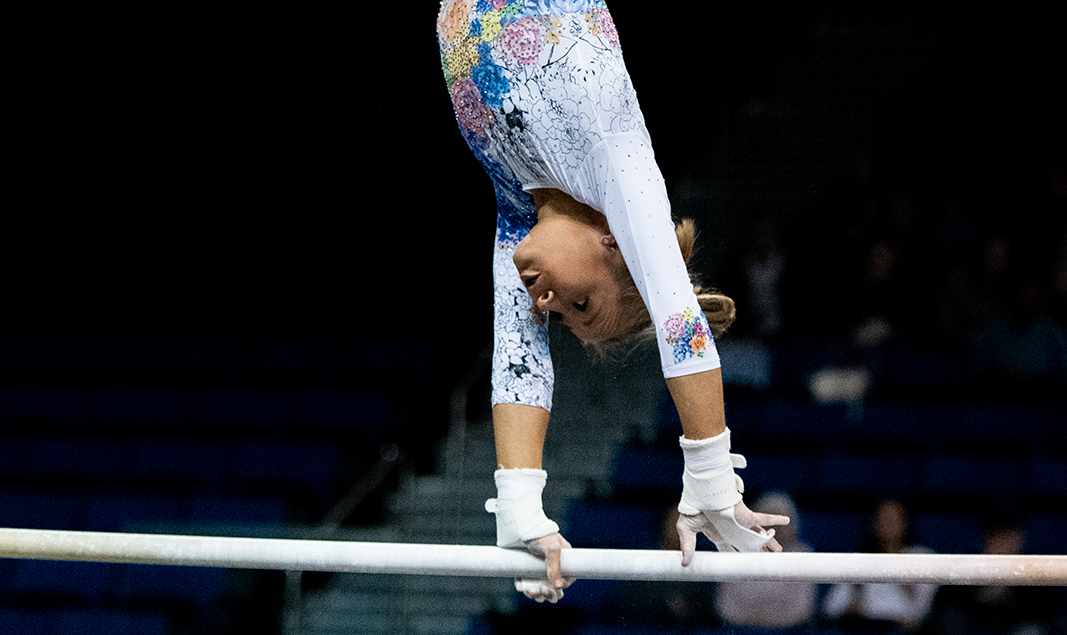 Senior Madison Kocian has scored a 9.900 or higher on uneven bars in every meet she’s competed in this season, including a 9.925 in the event last weekend versus then-No. 20 Arizona. (Kanishka Mehra/Assistant Photo editor)

The Bruins have been showcasing the depth of their roster.

Two meets ago, UCLA found itself at a season-low, garnering a 196.250 against Washington.

Sophomore Margzetta Frazier said that the quick turnaround in scores was not a surprise.

“At this point our season high should be expected because we have a natty to win in the long run,” Frazier said. “We’re not going to let that (Washington) score define us because we can (be) even better than what we just did, so it’s a matter of consistency and believing in ourselves everyday in the gym because then that’ll translate to the competition floor.”

Additionally, newer Bruins made appearances in their events beyond just exhibitioning. Freshmen Emma Andres, Chloe Lashbrooke and Kalyany Steele competed in various events, and sophomore Samantha Sakti also was in the beam lineup.

Senior Madison Kocian said this versatility helped the Bruins succeed against the Wildcats.

“We had a lot of people step up,” Kocian said. “We had two freshmen go in at the beginning of the lineup, we had some people sick this week, and some little injuries here and there, so for our team to get a season-high after a not-so-great meet, I think that really shows the depth of our team and that we’re able to even accomplish more going forward.”

Coach Chris Waller said the lineup is expected to change again this weekend. Senior Kyla Ross will be given a rest by being taken out of the all-around, in which she is ranked No. 2 nationally, while Frazier will not compete at all due to an ankle injury.

“(Ross) has done all-around every single meet, so we’re gonna rest her a little bit and that’ll give some opportunity for other athletes to come in,” Waller said. “(This) is great because we need as many people as possible to have experience out on the floor because you never know who you’re gonna lean on or who’s gonna step up and be that next superstar.”

UCLA’s team scores throughout the season are higher than all but one of Arizona State’s, a season-high of 196.300 two meets ago.

The Bruins also outrank the Sun Devils in every single event. UCLA sits in the top 10 of every event except beam, while Arizona State has not broken into the top 20 in any. In addition, no Sun Devil athlete is in the top individual rankings, while the Bruins have between one and four in each event.

Despite the meet being on Arizona State’s home floor, Frazier said that UCLA is not worried about lacking the home-court advantage.

“We bring the party wherever we go,” Frazier said. “It doesn’t matter if we’re at Pauley or anywhere.”