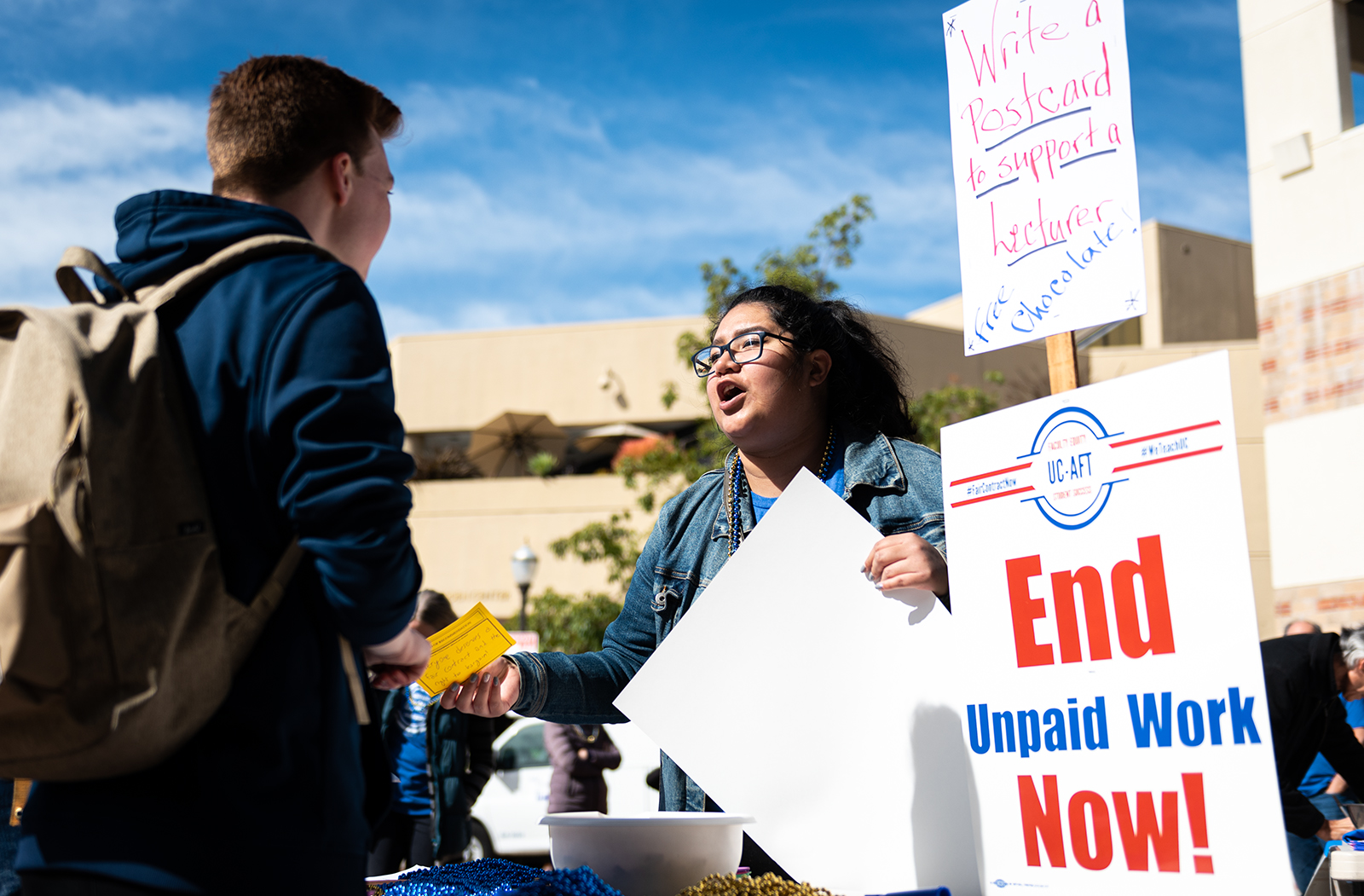 Teaching unions exist to protect lecturers who help, assist and educate the University of California’s students. They deserve fair pay and treatment for the services they offer. (Jason Zhu/Daily Bruin)

Despite its ranking as the best public university in the nation, the University of California hasn’t done much for the people that give it that title.

That is, current working conditions more closely resemble the likes of Amazon than a reputable teaching institution.

On Feb. 3, the University Council-American Federation of Teachers Local 1990, representing contingent faculty at the UC, protested at UCLA after its contract ended Jan. 31. Under its contract, these demonstrations were forbidden, making this window a key opportunity.

The union has been in negotiation with the UC Office of the President since mid-April last year, and it has bargained for fair pay, resources, benefits and job security, said Mia McIver, the president of UC-AFT Local 1990.

This recent protest comes on the heels of a ruling in favor of Academic Student Employees at the UC, who claimed UC Berkeley was cutting teaching assistants’ working hours to avoid giving them obligatory pay and benefits, including tuition.

Clearly, the UC has made a habit of exploiting nontenured faculty members across its many campuses.

The University needs to treat this ongoing contract renegotiation with UC-AFT Local 1990 as an opportunity to correct this exploitive behavior and become a leader in ensuring fair working conditions for university employees – not just use it as a chance to increase profits. Dedicated faculty constantly struggle to make ends meet and focus on students, resulting in decreased access to a quality education at the UC. As such, this contract renegotiation isn’t just a routine event – it’s a moment for the UC to reprioritize its goals for the benefit of the system as a whole.

The median lecturer represented by UC-AFT Local 1990 makes $19,900 a year, a low income anywhere in the country – much less in the wealthy communities surrounding most UC campuses. In Westwood, this is about a third of the average income per capita.

The UC may try to justify this by pointing to the number of work hours being a lecturer demands.

If only their estimation of the work it takes to teach at a top university were remotely reflective of reality.

Lecturers are only paid for time spent in the classroom, preparing for classes and office hours, McIver said.

“That is an extremely narrow way of looking at what the work of teaching is; we do a whole lot more activities with students and for students, and for our university community,” McIver said.

On top of such low compensation at the hands of the UC, job insecurity adds insult to injury.

“People joke about PhDs working at Starbucks, but that’s not actually a joke,” said John Branstetter, a lecturer in the political science department. “We won’t know if we’re going to get laid off until a month or two months before it happens, so it doesn’t leave a lot of time to prepare.”

A few months to find a new job may seem plenty, but for those in academia, fall is the only period during which they can apply for most jobs. In other words, notification that they won’t be lecturing in the next academic year any time after December hardly counts as a notice at all.

As a result, not only are faculty undertaking the unpaid process of reapplying for their own positions, they have to apply for other jobs as well – in case they’re among the 45% of UCLA lecturers who don’t get rehired.

The costs of these practices doesn’t just affect those working directly under UC contracts – students suffer too – whether they realize it or not.

“When you’re (working) two or three jobs, as I do, or when you’re constantly applying to other jobs, you’re just not able to put the time into teaching the way that you want to, that you know you can, and that students really deserve,” McIver said.

And distraction from teaching isn’t the only casualty of this taxing work environment.

“It’s this constant cycle of anxiety,” Branstetter said. “I’d rather spend time doing office hours and looking at people’s writing than worrying about whether I’ll have a job in a few months.”

The psychological burden these practices incur becomes unnerving in light of UCLA’s Depression Grand Challenge, a broadly advertised campaign aimed at cutting worldwide depression rates in half by 2050.

Before UCLA tackles the global order, it could at least start with its own lecturers.

Whether it be the Depression Grand Challenge or its next grandiose pet project, UCLA can tout its dedication publicly, ensuring that it gets plenty of credit – which means more student applications, more application fees and the ability to raise tuition without suffering a decrease in enrollment.

Of course, the UCOP claims otherwise.

“The University is working hard to negotiate a fair agreement as quickly as possible,” wrote Andrew Gordon, UCOP spokesperson, in an emailed statement.

With UC-AFT Local 1990, however, the UC’s track record makes the depth of its commitment to resolving this issue nothing short of suspicious. For example, the UC didn’t inform many faculty members of its rehire status by the deadline it had agreed to for this school year – a deadline that occurred during these contract negotiations.

Thus far, the only thing the university has proven is its dedication to deepening its own pockets, regardless of who pays the price.