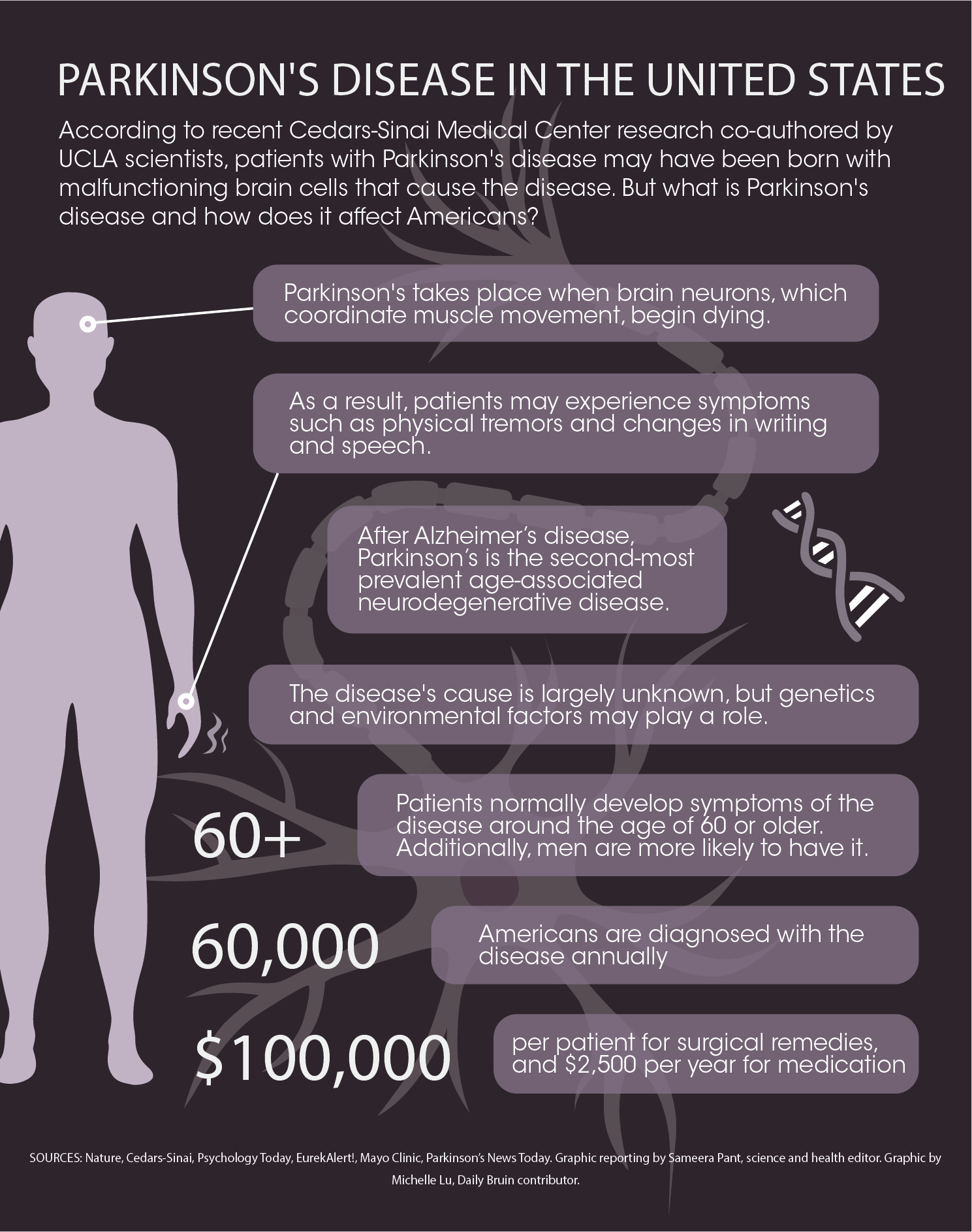 Adults with young-onset Parkinson’s disease may be born with malfunctioning brain cells, a new Cedars-Sinai study found with assistance from UCLA researchers.

This suggests factors other than environmental exposure likely contribute to neurodegenerative diseases such as Parkinson’s.

“More than a million people are affected by this in the United States alone,” said Zhan Shu, a postdoctoral scholar at the Semel Institute for Neuroscience and Human Behavior who participated in the Cedars-Sinai research.

iPSC cells from patients with young-onset Parkinson’s showed the signature changes seen in neurons in the brains of those with Parkinson’s. Their findings were published in Nature Medicine in January.

Dopamine plays a large role in neural functions, and a lack of regulation of dopamine production causes many neurodegenerative diseases, Shu said. In individuals with Parkinson’s disease, neurons that produce dopamine die off, which impairs motor regulation.

“This will usually start with a tremor,” Shu said. “It’s pretty obvious for family to see. Once you start to show symptoms, they … move from the hands to the legs to the nonmotor parts as well.”

The use of iPSCs allows researchers to determine how the disease progresses in absence of external environmental factors, said Alexander Laperle, a co-first author of the study from Cedars-Sinai. iPSCs are important for this research because they simulate how diseased neurons form during human development.

Laperle compared the current research technique to a car crash. Researchers can see the impacts and physiology of the disease, however they can’t see any of the development, similarly to how seeing a crashed car doesn’t tell an observer how the crash occurred.

“We don’t know anything about how (neurodegenerative diseases) originated or progressed,” he said. “You can’t directly observe this in a person.”

Changes in the chemistry of neurons that are affected from Parkinson’s disease occur many years before obvious symptoms can be detected, said Nigel Maidment, a professor at the Semel Institute who also participated in the research. Many of the symptoms are not as visible or obvious, Maidment said. Other symptoms can include cognitive issues, digestive tract issues and sleep disturbances.

“There are many nonmotor symptoms that patients often describe as more distressing,” Maidment said.

Detecting the presence of Parkinson’s disease and malfunctioning neurons before major symptoms develop could assist researchers in potentially finding ways to slow or stop the disease’s progression, Maidment added.

“If we are to halt the progression of the disease it will be necessary to identify such changes early,” Maidment said.

Many of the genetic causes of Parkinson’s disease are still unknown. Laperle added that if any cases are genetic, it is likely that many genes interact to cause Parkinson’s disease. The illness has no cure, but different treatment options can help individuals manage the symptoms.

Approximately 15% of Parkinson’s disease patients have a family history of the illness, Shu said. It is still unclear how genetic causes contribute to the risk of developing the disease, he added.

Shu said the iPSC research at Cedars-Sinai will give researchers new models for drug development. He said he hopes to expand research territories beyond preclinical animal models.

Using human iPSCs instead of animal cells has the potential to make the search for treatment more effective, he added.

“That’s the whole purpose of the paper, … to find a platform for people to test (drugs),” Shu said.

Many treatments that work in animal models cannot be translated to people, Laperle said. Part of this reason is because animals don’t have neurodegenerative diseases the way humans do, he said.

“If I give a drug to a mouse, I can have a positive impact on that animal’s symptoms, but it’s not a great predictor of when you give that drug to a person,” he said.

Many of the drugs currently on the market only address the symptoms, Laperle said. For example, the drug levodopa helps replace missing dopamine in the central nervous system. However, patients can develop a tolerance to the drug and its efficacy eventually decreases.

Laperle said he hopes this research may allow for the development of more effective drugs that slow or stop the progression of this disease.

“There aren’t any good approaches yet to slow this (progression) down or restore function,” he said.