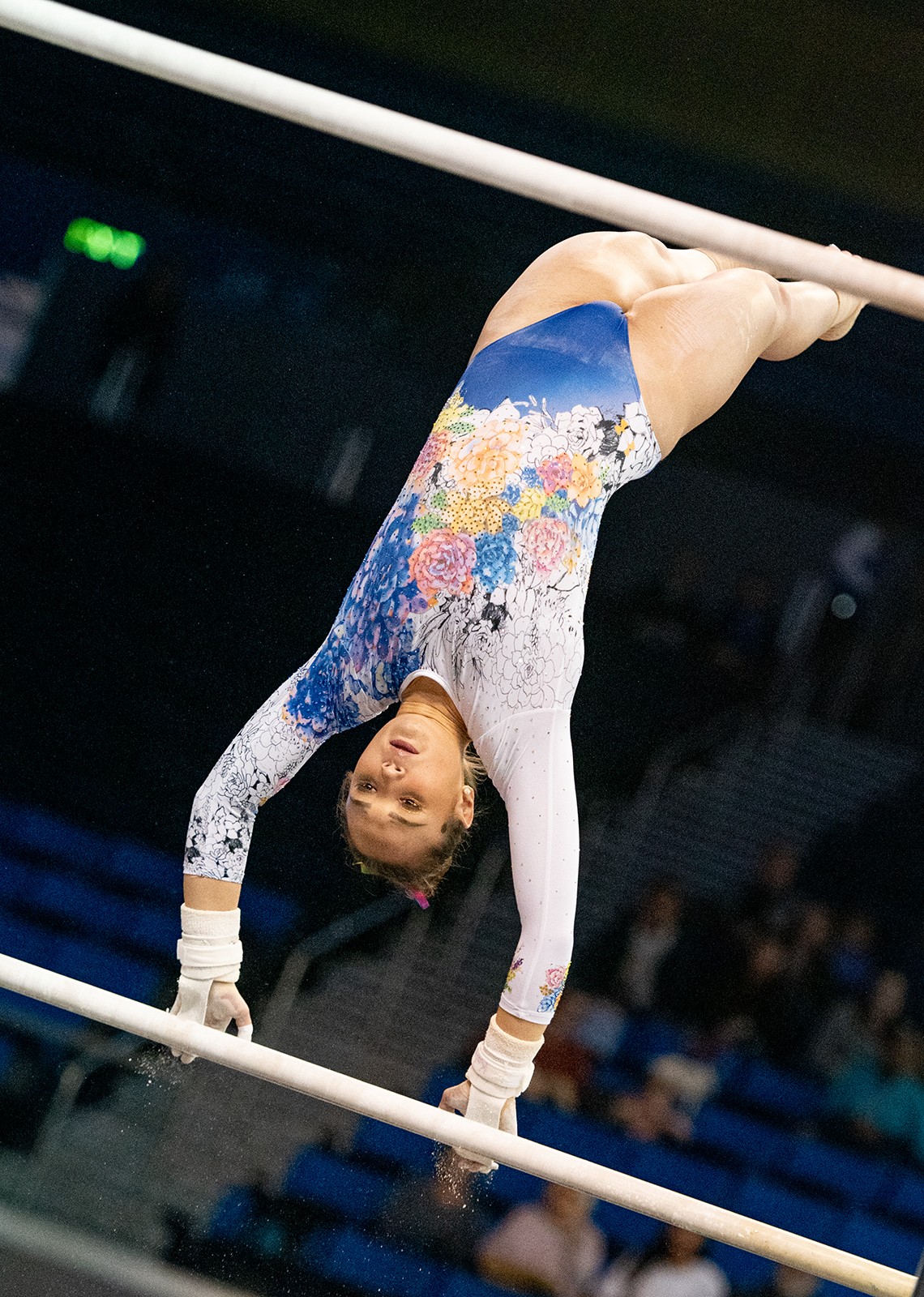 Freshman Kalyany Steele made a return to the uneven bars lineup for No. 4 UCLA gymnastics Sunday versus No. 22 Arizona. Steele was a last-minute addition to the rotation after teammate sophomore Norah Flatley got a migraine, and Steele scored a career-high 9.850. (Kanishka Mehra/Assistant Photo editor)

No. 4 UCLA gymnastics (4-1, 2-1 Pac-12) defeated No. 22 Arizona (2-4, 0-3) on Sunday. Freshmen Emma Andres, Chloe Lashbrooke and Kalyany Steele were called upon to compete in the meet, as well as sophomore transfer Samantha Sakti – each of them contributing a counting score to the Bruins’ season-high 197.675 team score.

“I think that all of our freshmen, transfers and all new people on the team provide so much,” said junior Kendal Poston. “We’re just happy to have them. They bring their positive vibes to the team, and we really can’t ask for anything other than that.”

Andres – who made her career debut – competed in both vault and floor exercise Sunday. Her 9.750 on vault was not included in UCLA’s event score, but a 9.875 on floor secured her as the meet’s third-highest scorer of the event, after a pair of winning 9.950s from fellow Bruins.

Several Bruins were unable to compete in UCLA’s floor rotation because of both injury and illness, including sophomore Norah Flatley, who was removed from the lineup because of a migraine and replaced with Andres just before the event began.

Andres had previously completed exhibition performances on both balance beam and floor exercise this season – and she scored a 9.625 in her floor exhibition Jan. 27.

Andres said she gave credit to her team for her 0.250 improvement between her first exhibition and her first time in the Bruin rotation.

“Exhibitioning is you recruiting yourself,” Andres said. “But, being in lineup, everyone has your back. Not that they don’t (have your back) during exhibition, but it was great to have my team backing me, and we do everything with real purpose in competition.”

Lashbrooke competed on floor for the third time Sunday. She posted her second 9.850 of the season on the event, just .025 away from her season-high 9.875, which she earned in her debut meet Jan. 12.

Steele is the only first-year Bruin who has made an appearance in the UCLA uneven bars lineup this season.

Steele posted a 9.800 on bars in her Bruin debut Jan. 4, and fell during her routine Jan. 12, earning her a 8.950. When Flatley was removed from Sunday’s lineups, Steele was placed in the bars lineup for the first time since her fall, and she posted her career-high bars score of 9.850.

Waller said allowing the new team members time to transition to college gymnastics has been key to their success at the halfway point of the season.

“It’s not an easy transition,” Waller said. “The first couple months were not easy, and all of freshman year is a transition for them to find their way, find their place, and be confident in who they are. Ultimately, they have to relearn that we recruited them because we believe in them, and that has taken some time.”

Sakti attended William & Mary during her freshman year of college and is the only gymnast on the Bruin roster who has transferred from another university.

Although Sakti posted a 9.750 on beam Sunday, which tied the lowest score recorded by a Bruin on the event, she has competed on beam in three other meets, and scored a 9.950 in her UCLA debut Jan. 4.

Waller said he is proud of the new gymnasts for being successful despite the added stress of joining a new team.

“(The new Bruins) have a new school, new coaches, all sorts of stressors, a lot of responsibilities that we have to UCLA as a team,” Waller said. “That’s a very big mindset change, and we are proud of them for doing it with grace.”

The entire UCLA roster will travel to Arizona State on Saturday as it enters the second half of its season. 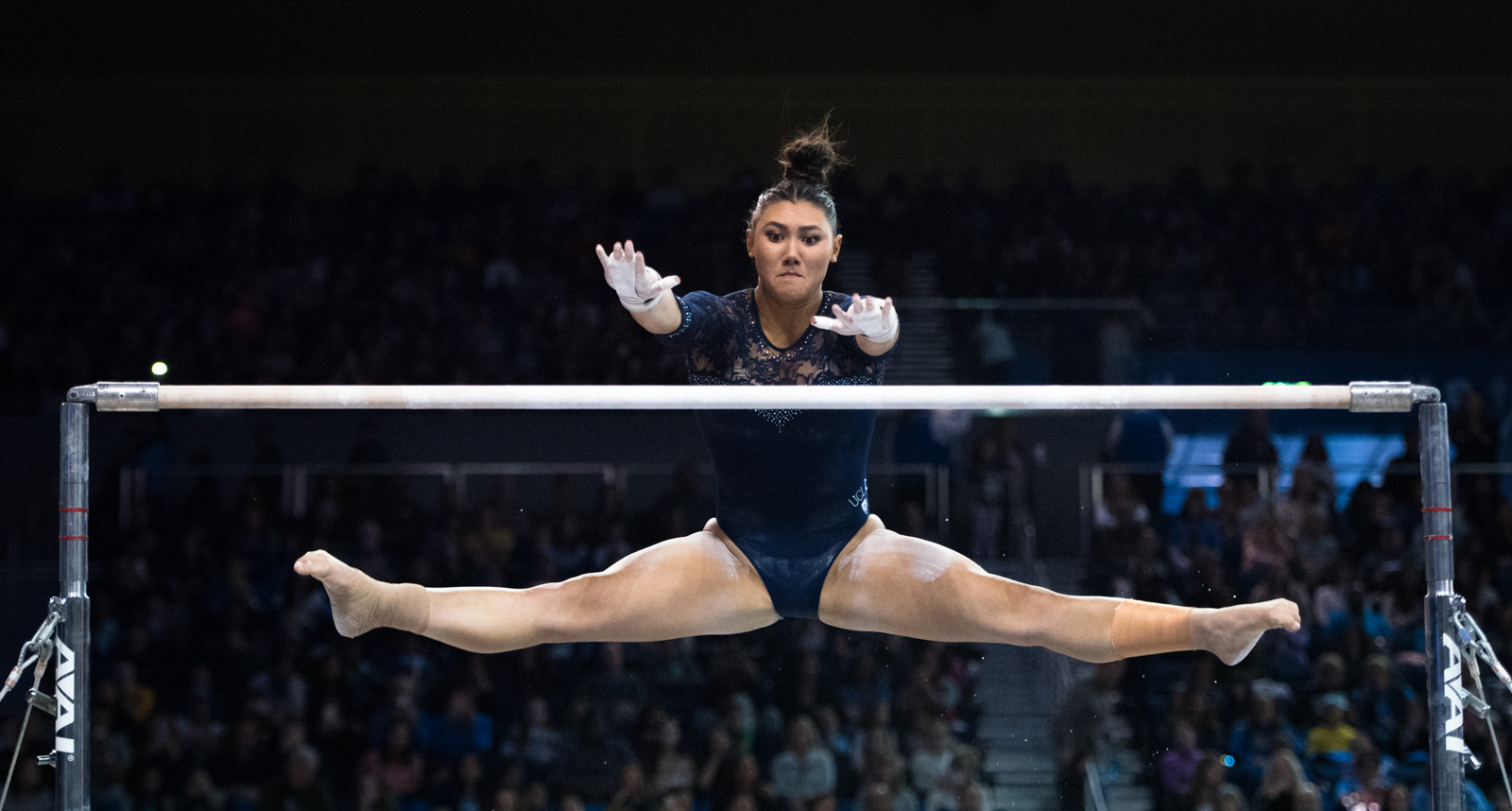