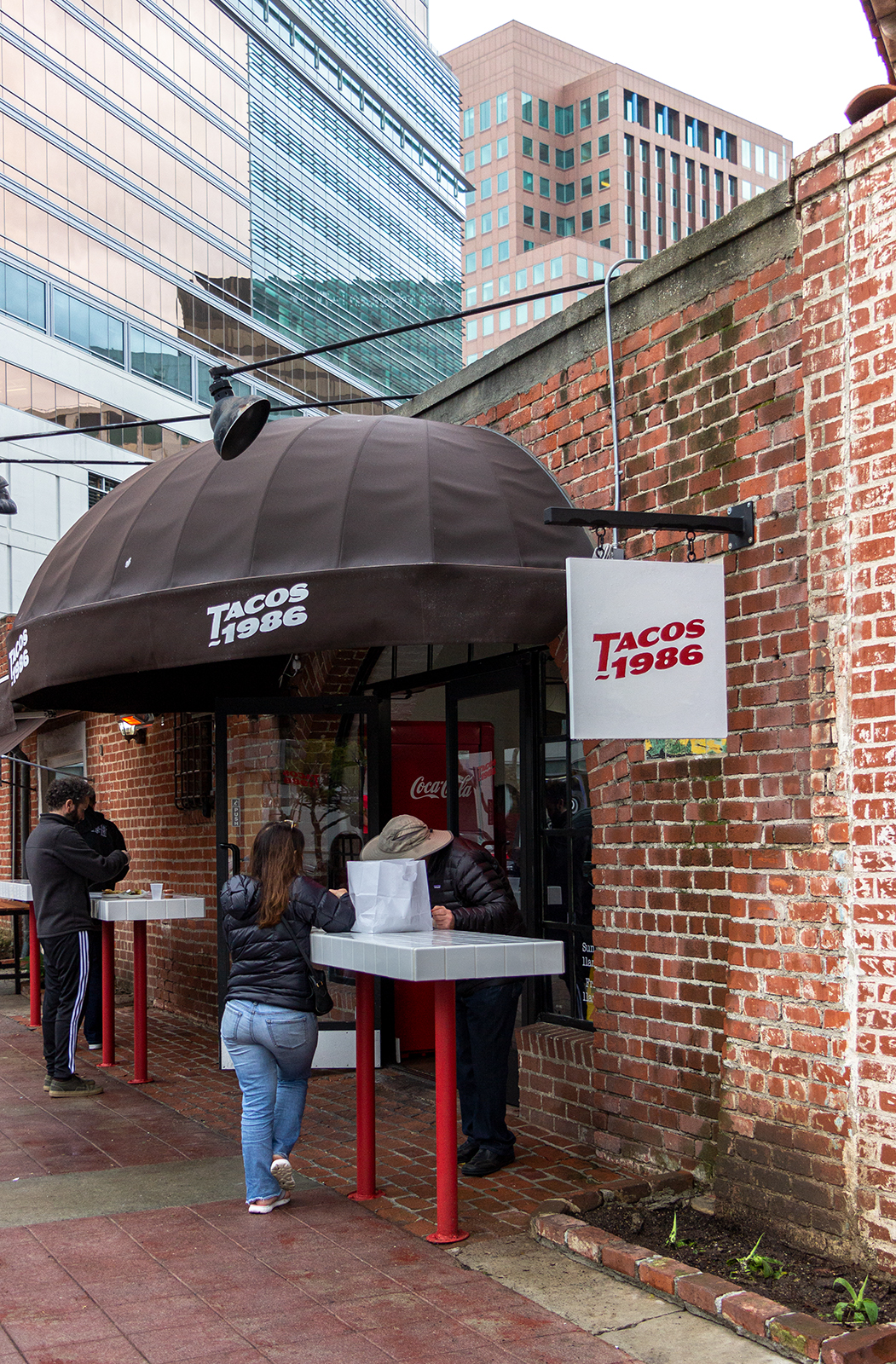 Clients eat tacos on the white counters in front of Tacos 1986, a Tijuana, Mexico, inspired taco joint that opened in Westwood Village on Friday. The red-and-white shop features an open kitchen and no seating. (Martín Bilbao/Daily Bruin senior staff)

Victor Delgado and Jorge Alvarez-Tostado, the owners of Tacos 1986, created the franchise back in 2018 as a taco stand traveling around Los Angeles, making stops in Venice, Smorgasburg and Koreatown. It rose in popularity practically overnight through avid food Instagrammers’ posts. In June 2019, they opened their first storefront in Downtown Los Angeles and now their second in Westwood, less than a year later.

Delgado and Alvarez-Tostado were born in 1986, hence the franchise’s name, and grew up together in Tijuana, Mexico. The taco stands in their hometown shaped the Westwood site’s open setup, showcasing the restaurant’s rustic kitchen and red and white color scheme.

“For (the kitchen) to be open in this way, we can have a spotlight on the taquero (taco maker) and tortilla lady,” Delgado said.

Delgado said the taco scene in Los Angeles seemed to lack authenticity to him when he arrived ten years ago. Together, Delgado and Alvarez-Tostado wanted to rekindle the connection between the client and the taquero.

“What we are trying to do at Tacos 1986 is create a style of execution where the taqueros are given a spotlight,” Alvarez-Tostado said. “There will be a lot of eye contact, and they will be remembering names. We want to shine over the big companies around here that still call out numbers (rather than names).”

Their menu offers tacos, quesadillas, mulitas and vampiros with a variety of toppings and proteins – carne asada, adobada, chicken and mushrooms. The main ingredient ∂is the tortilla which Delgado thinks many Mexican joints in Westwood have neglected.

“It all starts with the tortilla, the fresh handmade corn tortilla,” Delgado said. “If you see some of the food trucks, you’re going to see a bag of tortillas that was made who knows when and with preservatives.”

Westwood is home to a variety of Mexican eateries, such as Pinches Tacos, Tacos Tu Madre and Tocaya Organica. Tacos 1986’s Westwood site replaced a closed Simplethings restaurant on Kinross Avenue. The location’s proximity to UCLA and the Village’s unique food scene attracted the owners to Westwood.

“The whole vibe of (Westwood) is very different from most neighborhoods in LA, from Santa Monica to everywhere else, and the fact that there’s a lot of students here is definitely a challenge for us that we want to partake in,” Delgado said. “I feel like Westwood chose us in a weird way because we were not looking for it.”

Andrew Thomas, the executive director of the Westwood Village Improvement Association, which oversees city planning within the district, said Tacos 1986 would be well rewarded in a place such as Westwood.

“If Tacos 1986 is able to deliver great food and a great eating experience, then they have a chance to join our other successful Mexican establishments,” Thomas said. “I also know that Westwood is a destination that rewards quality.”

Christina Esser, a graduate student from San Diego, said there is a variety of Mexican restaurants in Westwood but added that many of them lack authenticity.

“It is definitely on the expensive side, and it’s not traditional Mexican (food) – it is very Americanized,” Esser said. “We are near Beverly Hills and everyone’s very into healthy things like kale.”

Tacos 1986 offered a free taco promotion Friday to tease its official opening day, Saturday. Delgado and Alvarez-Tostado said they were proud of the turnout.

“The best way to get food traffic is just by offering (clients) a free taco,” Delgado said. “That’s just the way that we like to introduce ourselves to a neighborhood.”

Current and former students dropped by to try some tacos and some responded positively to the new joint.

Robert Nguyen, a UCLA alumnus, was walking back from the gym and saw the long line in front of Tacos 1986. He did not know there was a free taco promotion.

“I pulled in, and apparently they had free tacos,” Nguyen said. “I’m always down for free tacos.”

Nguyen applauded Tacos 1986’s authenticity and compared it to the Mexican food from his home.

“It’s very authentic,” Nguyen said. “I grew up in a Mexican community, and it tastes just like the tacos I had in my hometown.”

Madeline Brout, a law student, heard of Tacos 1986’s success in Downtown LA and was excited to hear of its opening in Westwood, which she believed was lacking Mexican food.

“There was not much before, so I’m glad there’s a good taco spot,” Brout said. “I always want more food in the neighborhood.”