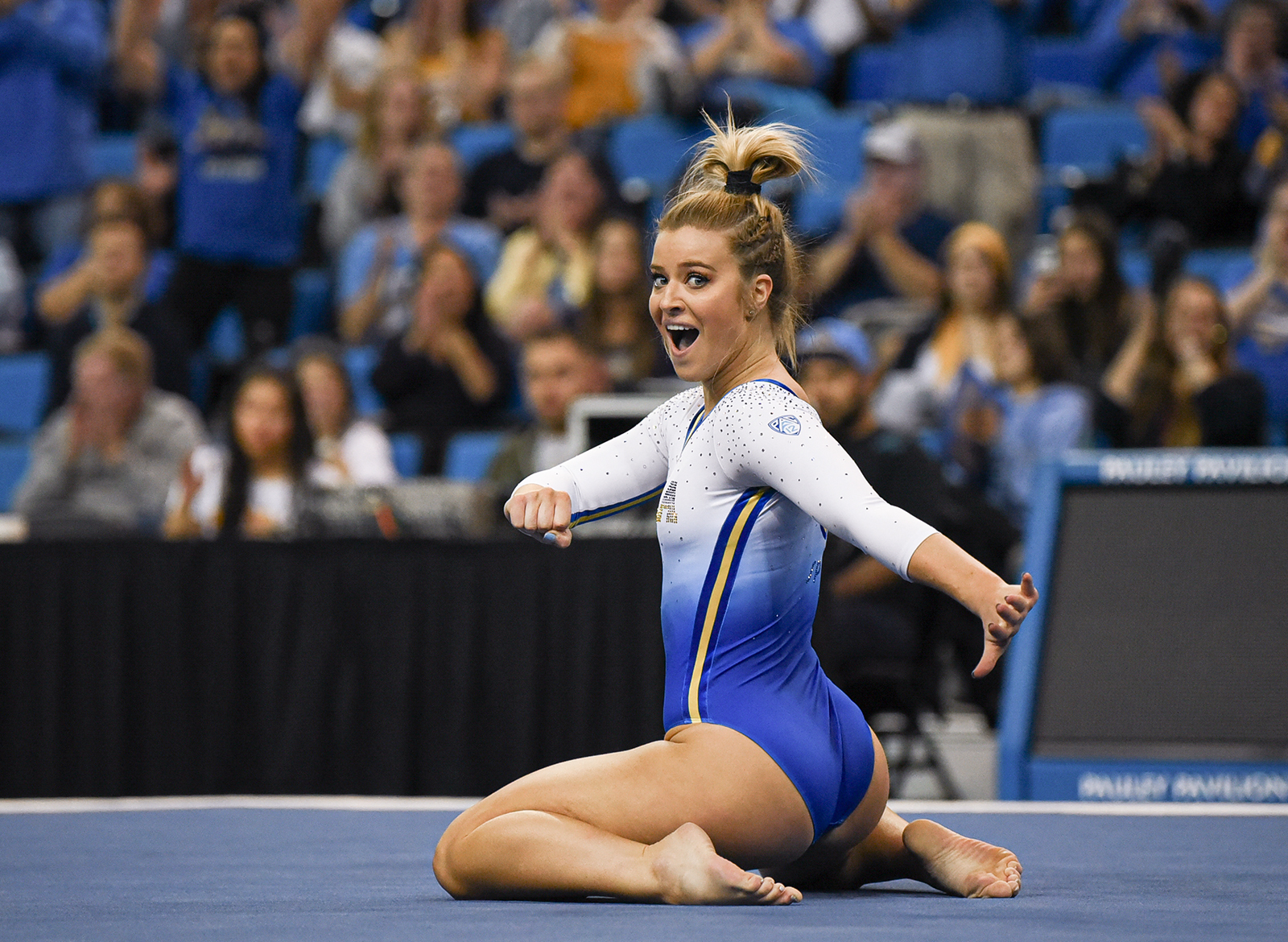 Senior Gracie Kramer and No. 5 UCLA gymnastics finished up the Bruins’ meet versus Washington with a score of 49.675 on floor, refusing to give up after a disappointing balance beam rotation. (Axel Lopez/Daily Bruin senior staff)

Even in defeat, floor continues to be a pillar of success for the Bruins.

On Friday night, No. 5 UCLA gymnastics (3-1, 1-1 Pac-12) was handed its first loss of the season by No. 11 Washington (3-0, 2-0). Though the meet ended in the Bruins falling to the Huskies, the team still bounced back to produce a high-scoring floor routine immediately after a sub-48 beam score.

Three falls on beam put UCLA behind Washington, a team the Bruins have not lost to since 2012. But the team beam rotation did not fold, despite the deficit.

Coach Chris Waller gathered the team to talk before moving onto the fourth and final event of the night on the Valorie Kondos Field Floor.

“I did throw out there that I want to finish this out and with character and do an amazing show for our incredible fans,” Waller said. “I knew that Washington was way ahead of us, but I figured the bigger we went, we could build some momentum that might get in (Washington’s) head because they have to make mistakes at that point for us to win.”

Sophomore Norah Flatley and junior Nia Dennis each received a 9.950, while senior Kyla Ross garnered a 9.900. The lowest floor score of the night was a 9.875. To cap it off, senior Gracie Kramer scored her first perfect 10 of her collegiate career.

Kramer finished her routine to chants of “10” from the crowd, and was immediately mobbed by teammates upon seeing her score.

“I was crying,” Flatley said. “It’s so well deserving, and it’s long overdue.”

The difference in scores between beam and floor was almost two full points.

Kramer said the team culture is part of what contributes to the Bruins’ ability to bounce back from events with a tough outcome.

“Based off of the vibe that I get, we have this game that we play, like who can be lights out the most and who can sell it the most,” Kramer said. “It’s that mentality of game mode where we perform until the very end, even if it’s not 100%. I’ve never seen anyone let down after a bad pass because that’s just the culture that we’ve set: You perform until the very end.”

The Washington meet is not the first time the Bruins have faltered on beam prior to exhibiting a high-scoring floor performance. Against Boise State on Jan. 12, UCLA finished its beam rotation with a 48.400 before producing a 49.725 on floor, a national high.

“I think, generally, this team thrives off of doing big, bold, audacious things,” Waller said. “In the right moments, when they embrace that, to do something unexpected or to come back that big, or just demonstrate that character, they just feed off of that.”

The Bruins are ranked first on floor nationally and have three athletes in the top 10 individual rankings: Ross in fourth, Kramer in fifth and sophomore Margzetta Frazier in seventh.

Only UCLA’s performance on uneven bars comes close to matching its domination on floor, as the team is ranked second and boasts Ross at No. 1, Frazier at No. 5 and senior Madison Kocian at No. 8. The Bruins are fourth in the nation on vault, but only Ross is in the top 10. On beam, the team is ranked 31st.

Kramer said UCLA wants to emulate its success on floor in its other events by bringing the team’s floor mentality to the other aspects of meets.

“You’re on stage, and I think the reason why we struggle on other events is because we don’t see them as a stage,” Kramer said. “That’s something that we and (Waller) have talked about, where we see it as a performance on every single event, and you’re in your routine as if it’s a floor routine in every single event.” 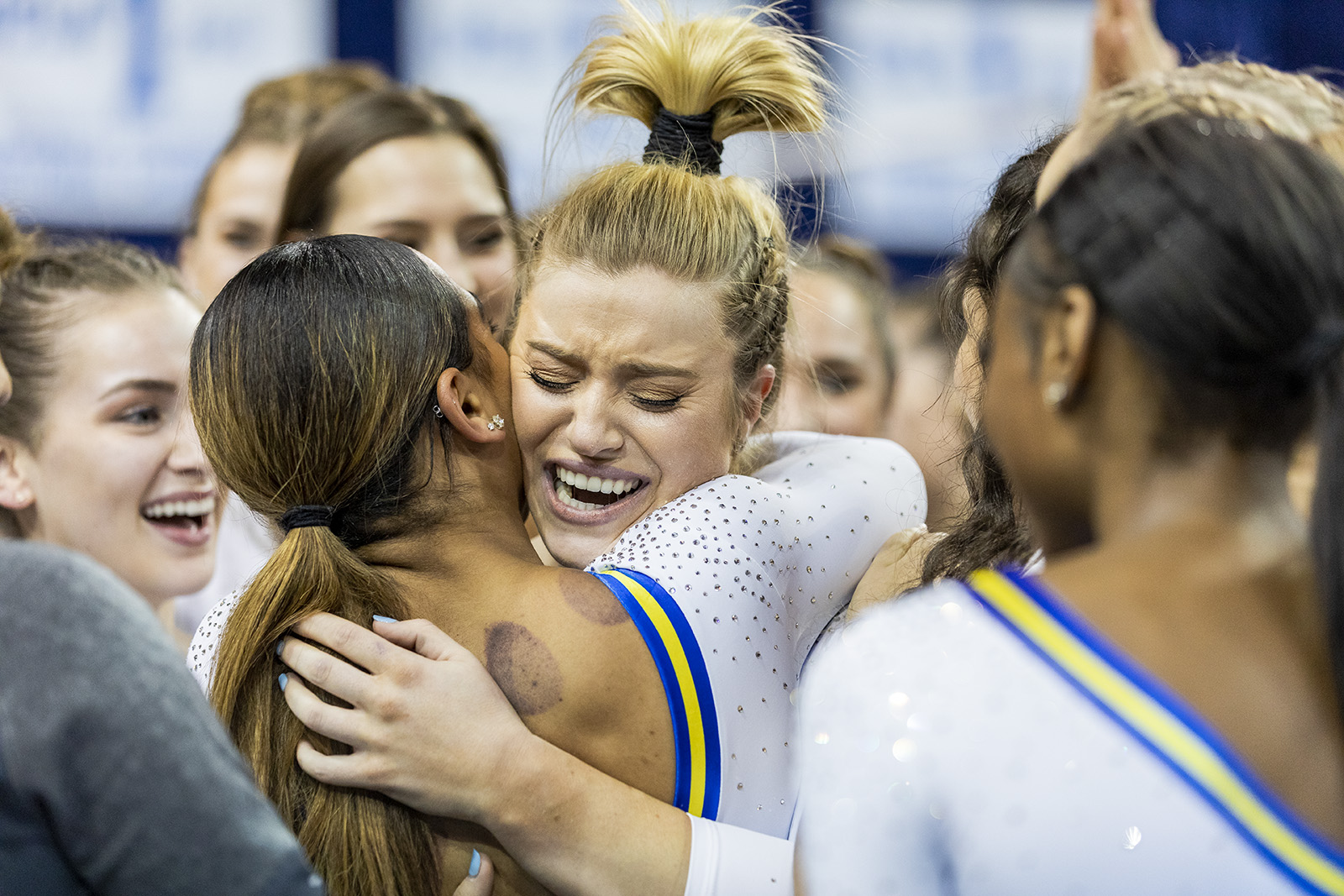