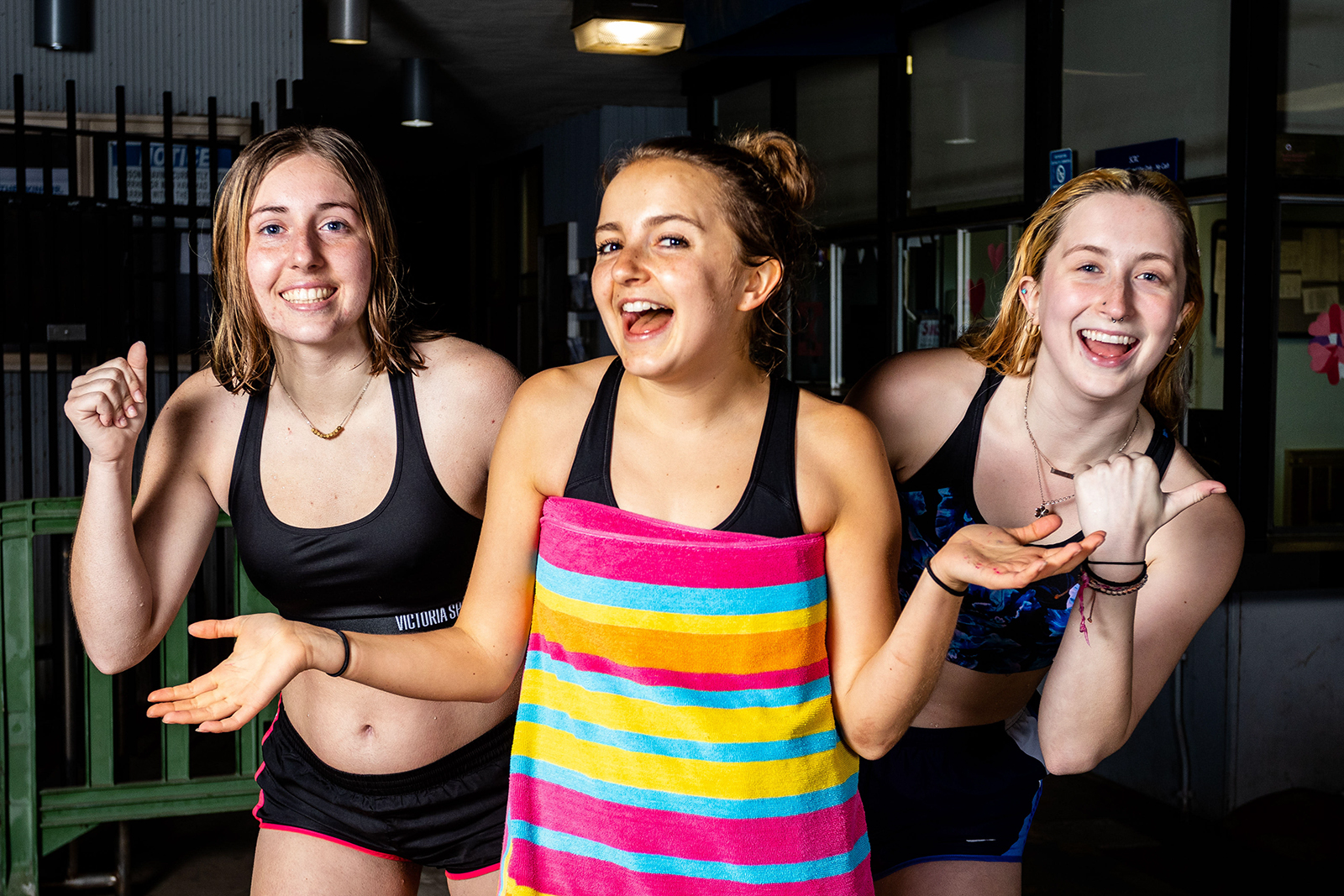 Kelsey Dempsey (center), a second-year pre-communication student, started aqua-jogging as a rehabilitation exercise after an injury in high school. Since coming to UCLA, Dempsey has gathered her friends, including Kaylee Johnson (left), a first-year pre-communication student, and Helen Gunn (right), a second-year psychology student, to continue the exercise. (Jintak Han/Daily Bruin senior staff)

Five students crossed the Sunset Canyon Recreation Center Park Pool at sundown in a huddle, bobbing up and down as they jogged to propel themselves the length of the pool and back. Unlike the silent swimmers lapping nearby, the small group’s laughter and happy chatter could be heard across the pool deck.

Aqua Jog at UCLA was founded by Dempsey only three weeks ago to create an inclusive exercise community.

Aqua-jogging, treading water in a running motion, is a low-impact exercise practiced for rehabilitation purposes, primarily in the running community.

“People ask if I’m OK,” Dempsey said. “I just look like a floating bob and I’ll be breathing really hard. People don’t know what’s happening, even though I’m very comfortable in the water and I know how to swim.”

The club, although new, has received a lot of interest. The initial interest form received around 50 responses and about five or 10 people attend each session, Dempsey said.

Many runners turn to aqua-jogging as a low-impact alternative when they sustain injuries, which is how Dempsey began the sport. Dempsey was injured in cross country in high school, and again in college during Dance Marathon.

“It was a hard time,” Dempsey said. “I’d take the Center for Accessible Education vans to class. I couldn’t really walk, but I could run in the water. Even though I’m still injured now, I know that I’m so lucky to be able to do at least something that reduces stress and makes me feel good about myself.”

Some participants came to the club to find a way to exercise with their athletic injuries.

“I have a knee injury, so it’s hard for me to run on land,” said Noelle Wheeler, a second-year computational and systems biology student. “I feel like this will be really good for me to strengthen my leg.”

Helen Gunn said she wanted to find a new way to exercise in the water.

“I swam in high school and I did water polo,” said Gunn, a second-year psychology student. “I’m very into aquatic activities, so I’m just excited to see some other ones.”

Dempsey also started the club to create an inclusive space for all UCLA students to exercise.

She recently quit Greek life and experienced rejection from several organizations during her first year at UCLA.

A major draw of the club is the social aspect, said Kaylee Johnson, a first-year pre-communication student.

“I think it’s really nice coming out and hanging out with a new group of people and just bonding over something like aqua-jogging,” Johnson said.

Dempsey said she hopes the club will offer a space for everyone.

“What I really want from this club is just to make others feel included and make people feel that they have a place in UCLA,” Dempsey said.

Club members meet Saturdays at 10 a.m. and Sundays at 6 p.m. on the lower pool deck of Sunset Recreation. 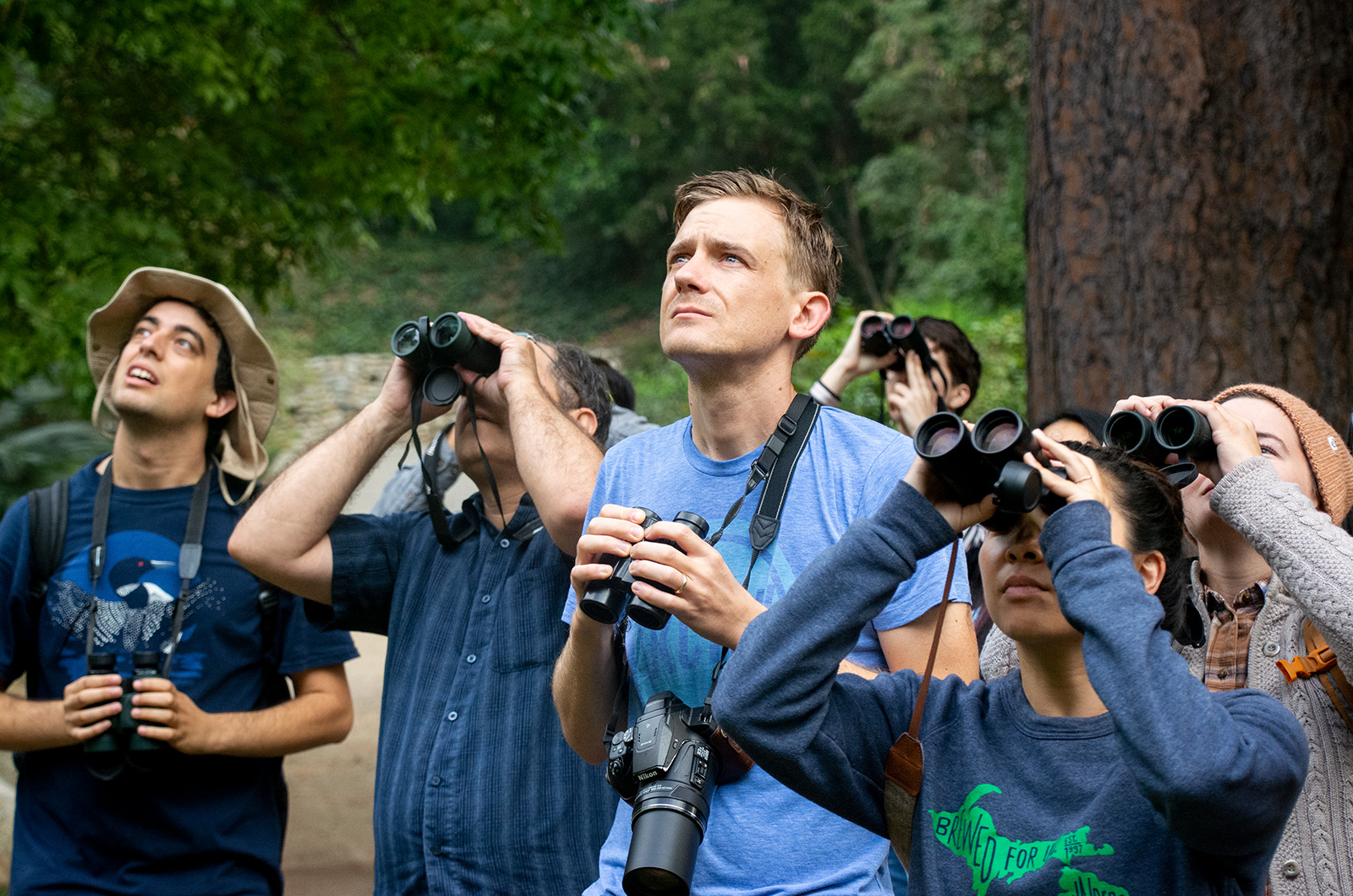