As UCLA construction ramps up, runoff management policies should do so as well 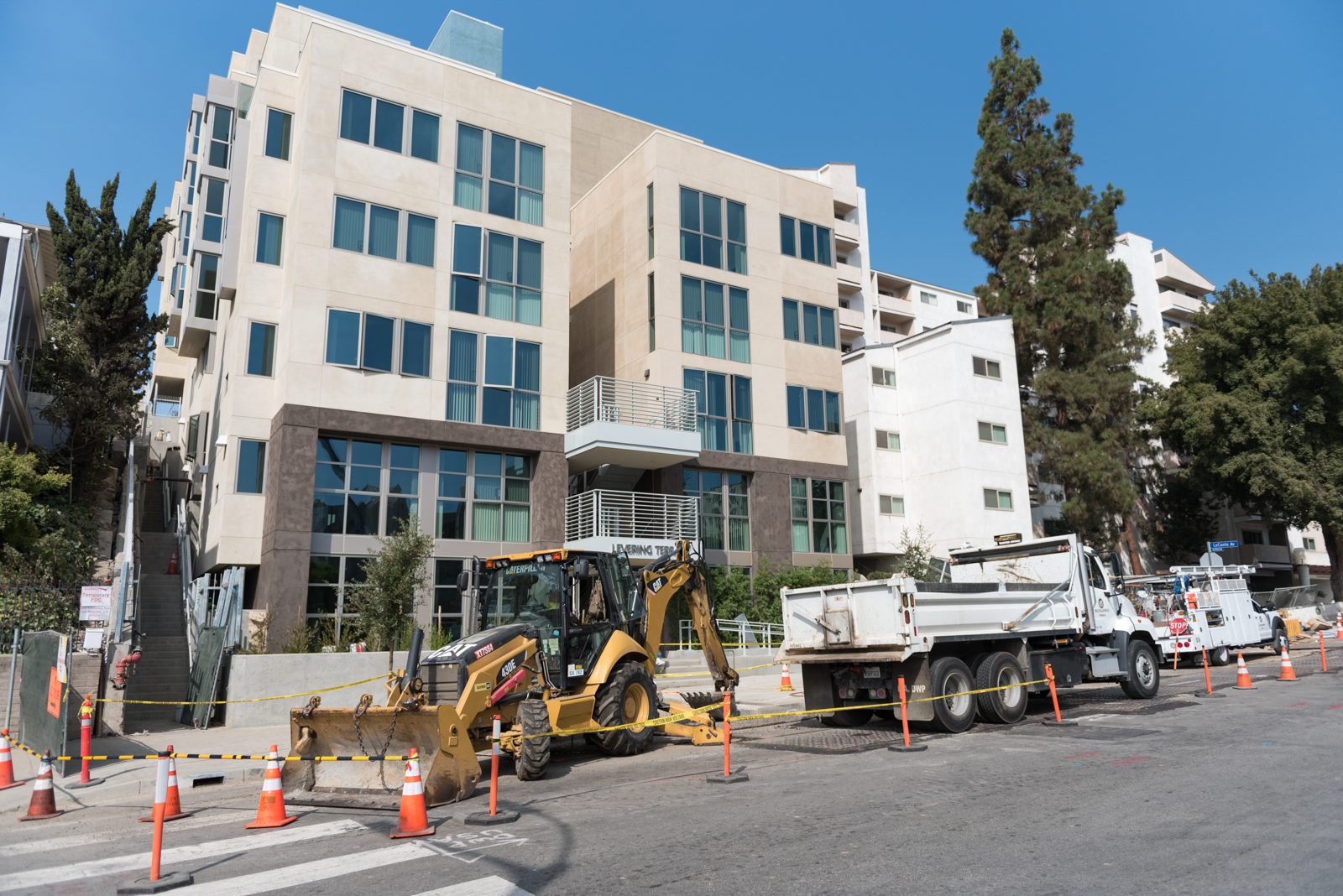 UCLA’s expansive housing projects aim to accommodate more students but at possible cost to its immediate environment. The water runoff from the day-to-day construction mixed with the trash-infested Westwood streets could end up in Santa Monica Bay. (Daily Bruin file photo)

Noise and dust seem like the worst of students’ problems when it comes to constant housing construction.

But the real concerns are the unforeseen environmental consequences.

Stormwater runoff – pollutants gathered by rain and carried into waterways via storm drains – poses a huge problem for the local environment.

As it stands, the university has unquestionably gone above the call of duty in its stormwater management. They’ve implemented green infrastructure throughout campus that uses plants, soil and permeable concrete to allow rainwater to absorb into the ground instead of carrying pollutants into storm drains.

But the grandiose scale of this housing expansion is not being met with equal expansion of UCLA’s stormwater management facilities. And these industrious undertakings are of little help when it comes to reducing runoff generated by UCLA’s growing population and the construction in Westwood.

UCLA has a responsibility to address the runoff its new projects are generating, one that goes beyond just meeting state regulations that reduce the amount of harmful chemicals ending up in waterways like Santa Monica Bay. The university needs to be proactively working with the North Westwood Neighborhood Council to implement green infrastructure around new residential projects in Westwood. These improvements would repurpose rainwater from a potential environmental hazard into something that replenishes groundwater and even provides water for campus facilities.

That starts with UCLA making use of its own research.

Green infrastructure in the Westwood area is nothing new. The Westwood Neighborhood Greenway is a project located at the Westwood/Rancho Park Metro station created with the express purpose of improving water quality in Santa Monica Bay. Instead of directing rainwater through existing storm drains, the Westwood Greenway will implement bioswales – sloped channels that direct runoff through native plants that capture pollutants, replenishing groundwater in the process.

UCLA should be taking notes.

As an institution that prides itself on being at the forefront of environmental research and implementation, it’s a wonder why the university isn’t working toward something similar with its own construction in Westwood.

There are a lot of hurdles that UCLA would have to jump through to enact a project like this. Luckily, it has access to all the research it needs right on campus.

“Our studies, at the Luskin Center at least, (are) focused on implementation concerns and governance and how campuses can go about incorporating green infrastructure and what are some of the barriers to that, such as permits and financing,” said Kyra Gmoser-Daskalakis, a researcher at the UCLA Luskin Center for Innovation whose work focuses on the capacity of green infrastructure to combat drought in Southern California.

However, Gmoser-Daskalakis also said that the LCI isn’t directly advising the administration on this matter.

“We haven’t gone in and said, ‘Put a bioswale there,’ because facilities and landscaping and all these departments on campus are thinking about these things and are in a position to be making those decisions,” she said.

While this may be true, it’s hard to deny the large discrepancy between green infrastructure at UCLA and just a few steps off campus, especially considering the wealth of resources at the administration’s disposal.

And unlike noise and dust, stormwater runoff goes far beyond the confines of campus.

Two of the projects in the UCLA Student Housing Master Plan, the 10995 Le Conte Avenue Apartments and the Southwest Campus Apartments, are both located off campus, where trash-clogged streets will likely mix with construction runoff and end up in Santa Monica Bay.

Within the confines of campus, however, UCLA said it has taken strides toward implementing green infrastructure.

“UCLA has also gone the extra mile by replacing lawns with bioswales, installing permeable pavers, and constructing storm water detention tanks,” said the UCLA Office of Environment, Health & Safety in an emailed statement. “These low impact developments remove debris and pollution, and even harvest storm water for reuse in various buildings around campus.”

But looking past the fact that these improvements will do little to mitigate the impact of UCLA’s construction in Westwood, such efforts still aren’t enough, even for the main campus.

“We have some (elements of green infrastructure) on campus but not nearly as many as some of the other (University of California) campuses,” said Richard Ambrose, a professor emeritus in the Department of Environmental Health Sciences. “UC San Diego, for example, has really taken a leadership role in incorporating green infrastructure into their campus.”

Local waterways in Los Angeles need all the help they can get, and it’s troubling to see a top research university falling behind in the protection of these vital resources.

Granted, the property surrounding UCLA’s housing projects in Westwood is technically outside of its jurisdiction, and the university does require all construction sites to adhere to a runoff policy. As a result, the administration would be well within its rights to simply wash its hands of any further improvements. But the construction projects belong to UCLA, and so does the runoff. To stop at the bare minimum would be hypocritical for a university that prides itself on being at the forefront of environmental sustainability.

The pieces are all in place for UCLA: a neighborhood that’s already undertaking green infrastructure, a research center dedicated to helping the university overcome barriers and a mountain of resources to mobilize.

But for whatever reason, the university still sits idly by.