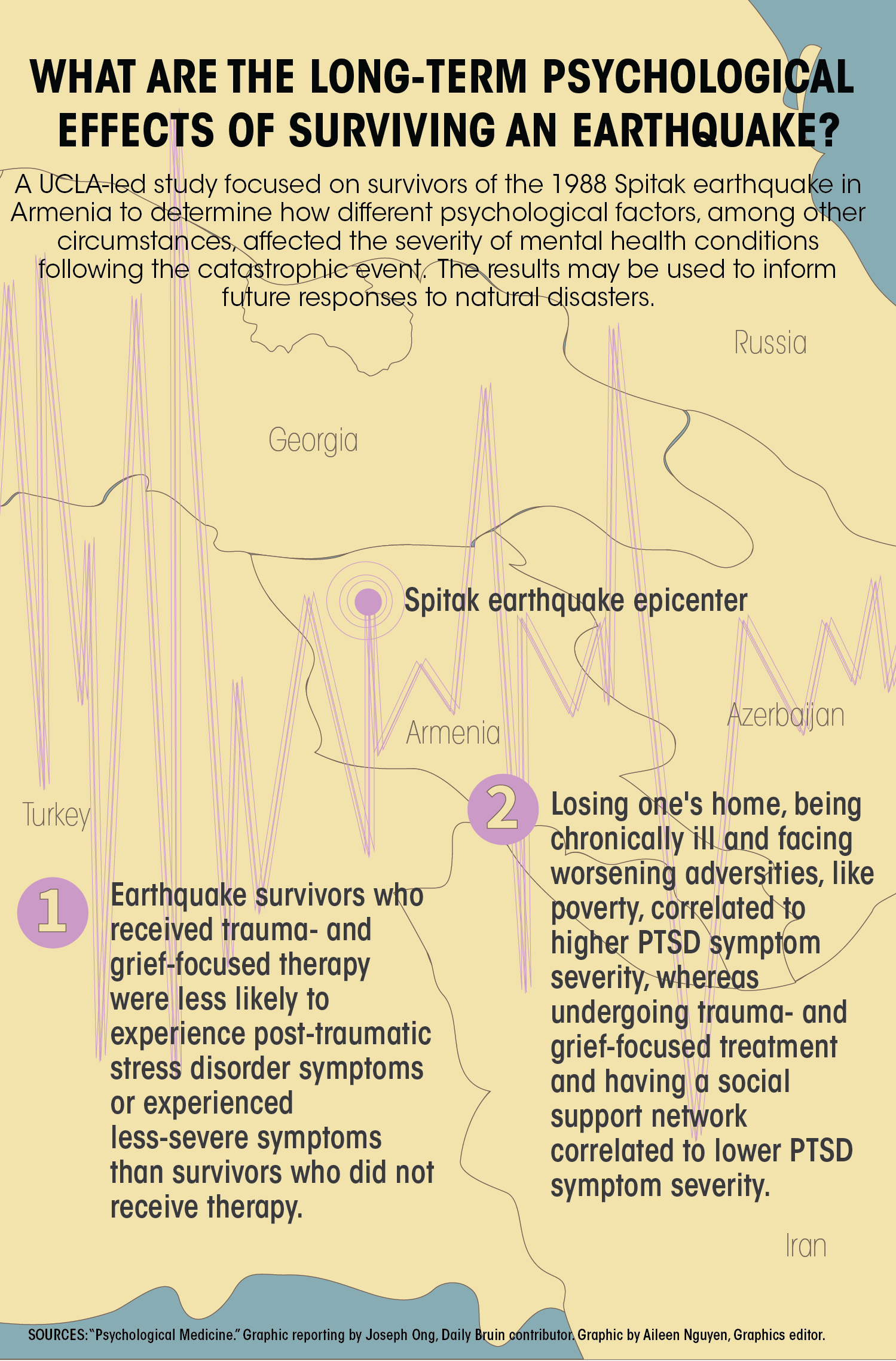 School-based psychotherapy can reduce the occurrence of mental health conditions after traumatic natural disasters, according to a UCLA-led study.

In a study published in “Psychological Medicine” on Jan. 14, researchers led by UCLA psychiatrist Armen Goenjian documented the course of post-traumatic stress disorder and depression among survivors of the Spitak earthquake in Armenia 1.5 years after the earthquake occurred and 25 years after it occurred. This is the first long-term study to look at PTSD and depression among treated and nontreated early adolescents after a catastrophic natural disaster.

The Spitak earthquake occurred Dec. 7, 1988, in northern Armenia. The 6.8 magnitude earthquake led to $16.2 billion in damages and 25,000 deaths, according to NOAA National Centers for Environmental Information.

Few studies have examined how experiencing a catastrophic natural disaster as a child affects psychological health as an adult, said Goenjian, who is also the medical director of the psychiatric outreach program for the Armenian Relief Society. Understanding the factors that lead to psychological issues like PTSD and depression is important for designing therapies and trauma treatments for children and adolescents who experience natural disasters, according to the study.

To understand the long-term effects of natural disasters on psychological health, the researchers assessed the mental health of adults who were early adolescents at the time of the earthquake. The survivors came from Spitak, a city about 11 miles from the earthquake’s epicenter, and from the neighboring city of Gumri, about 22 miles from the epicenter.

One and a half years after the earthquake, 94 students from Gumri schools received three weeks of trauma- and grief-focused therapy during school hours. Because of limited clinical resources, not all schools could be treated by psychiatrists and counselors, according to the study.

While rates of PTSD have decreased since the earthquake in both treated and untreated students, the severity of PTSD and depression symptoms was greatly reduced for the students who received psychotherapy. These results underscore the effectiveness of psychotherapy in the response to a traumatic natural disaster, according to the study.

Robert Pynoos, professor in-residence of psychiatry at the UCLA Semel Institute for Neuroscience and Human Behavior and co-director of the UCLA-Duke University National Center for Child Traumatic Stress, said the counselors helped the students deal with grief and the most traumatic aspects of the earthquake. He added Goenjian and the other counselors also helped to set up frameworks for students to manage their trauma and to transition through the experience.

“We taught (the children of Gumri) coping skills,” Goenjian said. “(As a result), the trajectory (for their mental health) in the coming years was changed.”

Alan Steinberg, associate director of the UCLA-Duke University National Center for Child Traumatic Stress and co-author on the study, said the results emphasize that this kind of intervention can be effective and long-lasting.

These results also highlight the importance of schools as centers for mental health efforts, he added.

By focusing on schoolchildren, psychiatrists and mental health counselors also have a greater impact in the community, because they work with the children’s families, as well, Pynoos said.

The researchers also compared the severity of PTSD and depression among survivors in Spitak to that of survivors in Gumri. Spitak had higher rates of damage, injury and mortality than Gumri, and consequently the survivors of Spitak initially had more severe mental health conditions compared to the survivors of Gumri, according to the study.

The survivors of Spitak, however, had better recovery rates for PTSD and depression than the survivors of Gumri after 25 years. Goenjian said he thinks this was because the city of Spitak was rebuilt faster and experienced less poverty and unemployment than Gumri.

“(Spitak) faced adversities (like) not having housing, electricity, heat and public transportation,” Goenjian said. “But when adversities are lifted, (mental health) conditions improve.”

A strong sense of community and social support also correlated to better recovery rates of mental health among survivors, according to the study. In contrast, having a chronic illness, such as asthma, arthritis or heart conditions, correlated to poorer mental health.