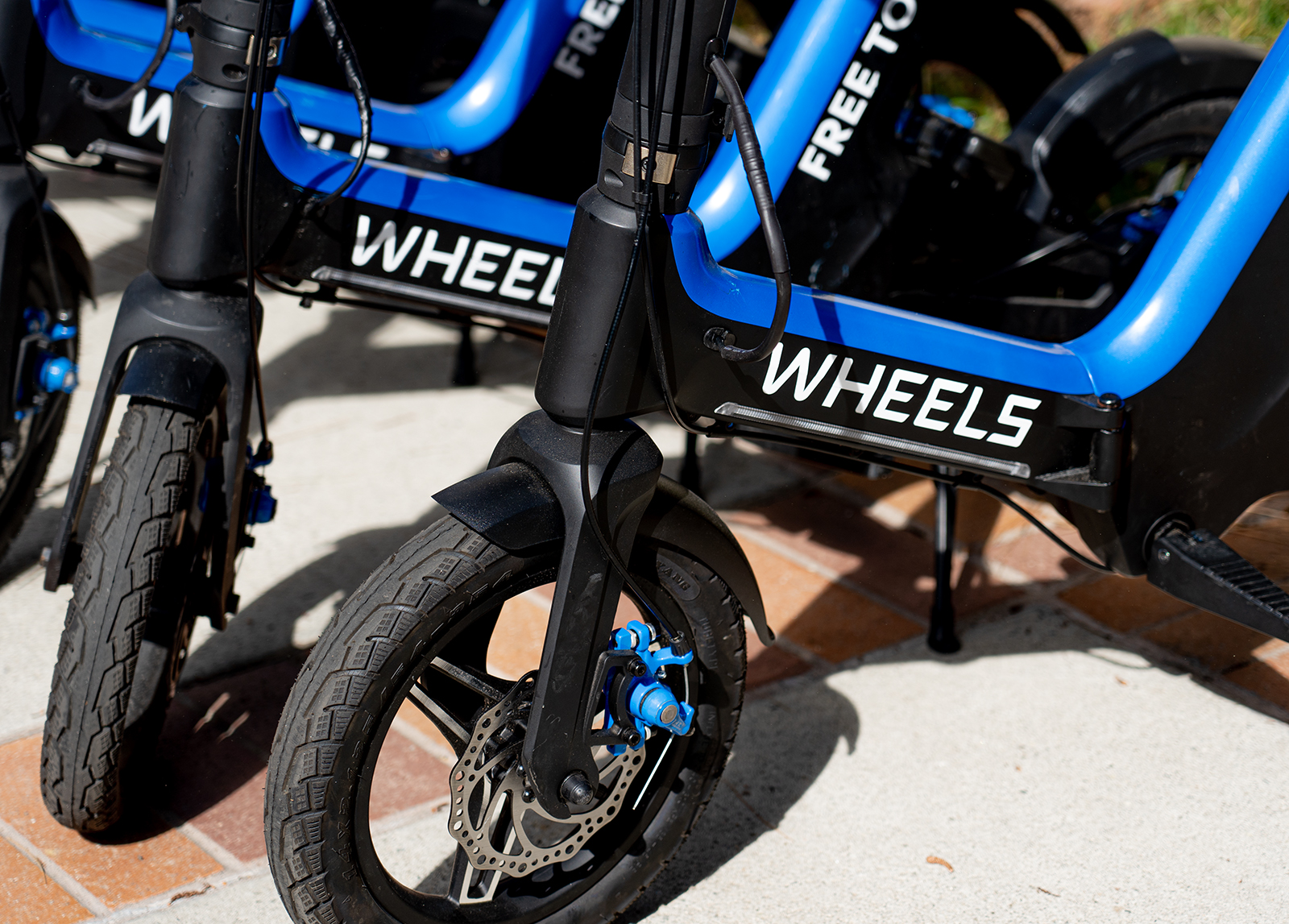 Electric bike company Wheels is one of three companies that is permitted to park on campus, according to an agreement with UCLA. Representatives from Wheels informed a committee of a new model with an integrated helmet system Jan. 14. (Elise Tsai/Daily Bruin)

The transportation and safety committee of the NWWNC, which represents Westwood and UCLA to the Los Angeles City Council, met with Wheels representatives to discuss the new model.

It has a helmet attached just above the back wheel that users can unlock through the app. The helmet also has a biodegradable liner that users can peel off after each use for hygiene purposes. Wheels did not comment on when it will release these models to the public.

UCLA conducted a study on electric scooter-related injuries in Southern California between Sept. 1, 2017, and Aug. 31, 2018, and discovered that head injuries made up 40.2% of total e-scooter injuries, the largest proportion.

In a similar study released in April, the Centers for Disease Control and Prevention and the Austin Public Health Department revealed that out of 190 patients admitted for e-scooter-related injuries in Austin, Texas, only one was wearing a helmet.

Wheels, along with e-scooter companies Bird and Lyft, signed an agreement with UCLA in August to be part of a one-year pilot program in which UCLA permitted the use of e-scooters and e-bikes on parts of campus as long as the companies fulfilled safety requirements.

An emailed statement from UCLA Transportation stated that e-scooter and bike companies had to meet certain requirements, such as geofencing parameters and specific campus drop-off zones. E-scooters are not allowed on pedestrian walkways and are automatically disabled in certain geofenced areas on campus, such as Bruin Walk and Bruin Plaza.

“The new agreements help the university reach its goal to provide sustainable transportation options that are convenient, affordable, and accessible while meeting the diverse needs of UCLA commuters,” the statement read.

Bird, another e-scooter company under the agreement, rolled out electric mopeds around LA in October following its acquisition of Scoot, another e-scooter venture. The new moped seats two and the company has plans for it to come with a helmet as well. Bird will also ship free helmets to any riders that request them according to its website, and Lyft also offers free helmets for pickup at a number of locations.

According to the agreement, the three e-scooter companies had to distribute helmets and hold outreach events for students.

Some UCLA students said they were receptive of the integrated helmet system, but were not sure if students would use it diligently.

Akshay Gupta, a first-year computer science student, has been riding e-scooters frequently for the past six months and said that he does not use a helmet or attend any e-scooter outreach events on campus.

“Purchasing safety equipment can be kind of expensive and I’m on a budget as an out-of-state student,” Gupta said. “Wearing a helmet takes time and when I’m trying to scooter, I’m trying to get to a place fast.”

Gupta said that he found Wheels’ integrated helmet system innovative, but was not sure if students would use these helmets.

“I believe the design has some flaws, such as the helmet is not really required to be worn while riding – at least to my knowledge,” Gupta said. “I have yet to have an accident because I’m very careful and attentive on the road, and it’s not required by law to wear a helmet.”

Wheels declined to comment on whether students would use the helmets diligently. Neil Vaishampayan, a first-year computer science student, recounted an incident in which he almost crashed without a helmet.

“I was going down a hill, and then I had a friend in front of me who braked very fast without telling me, and I had to swerve to avoid him and almost fell off,” Vaishampayan said.

Although the use of safety equipment is not guaranteed, Wheels has initiated a “Helmets Now Included” campaign with billboards around Los Angeles advertising the new model and its safety features.