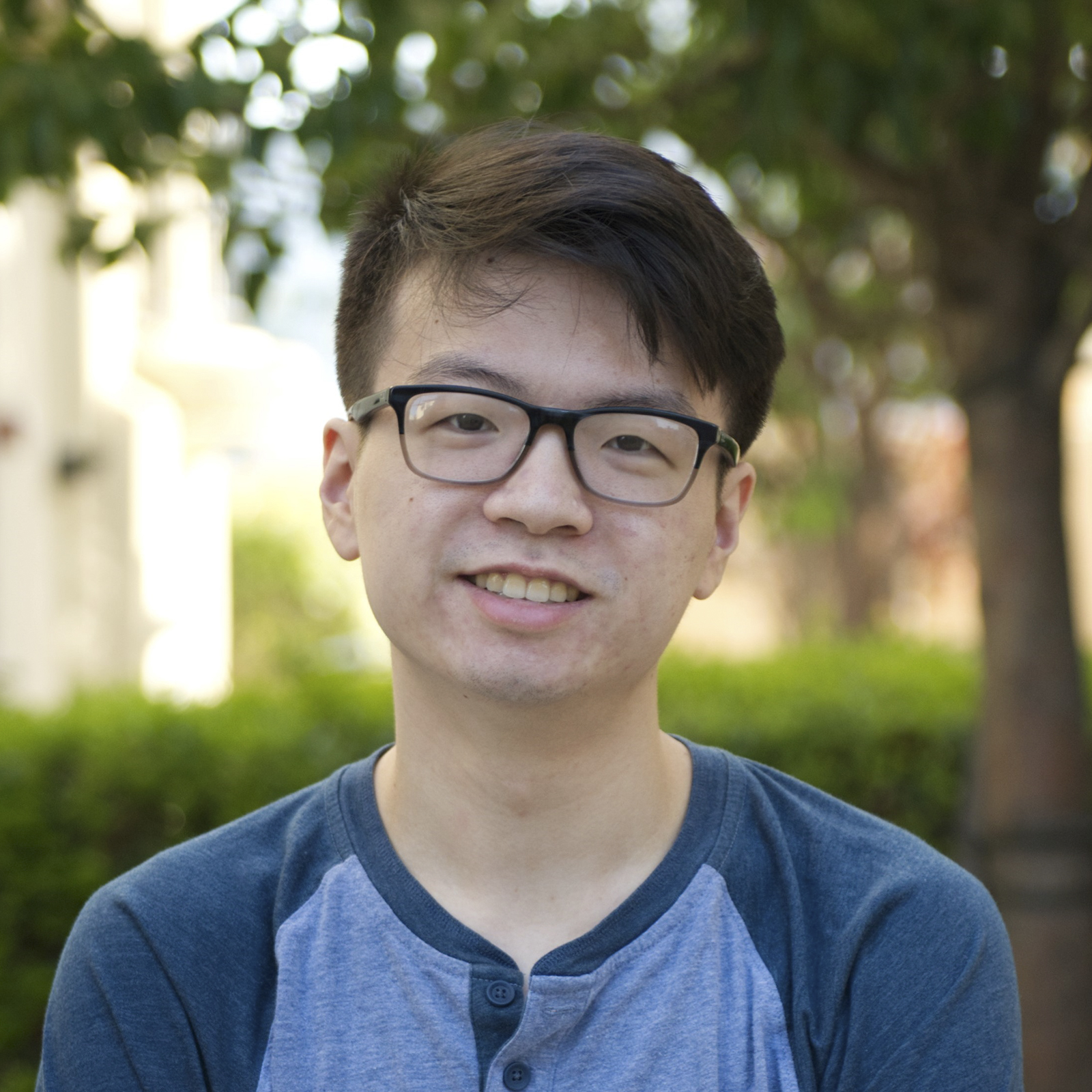 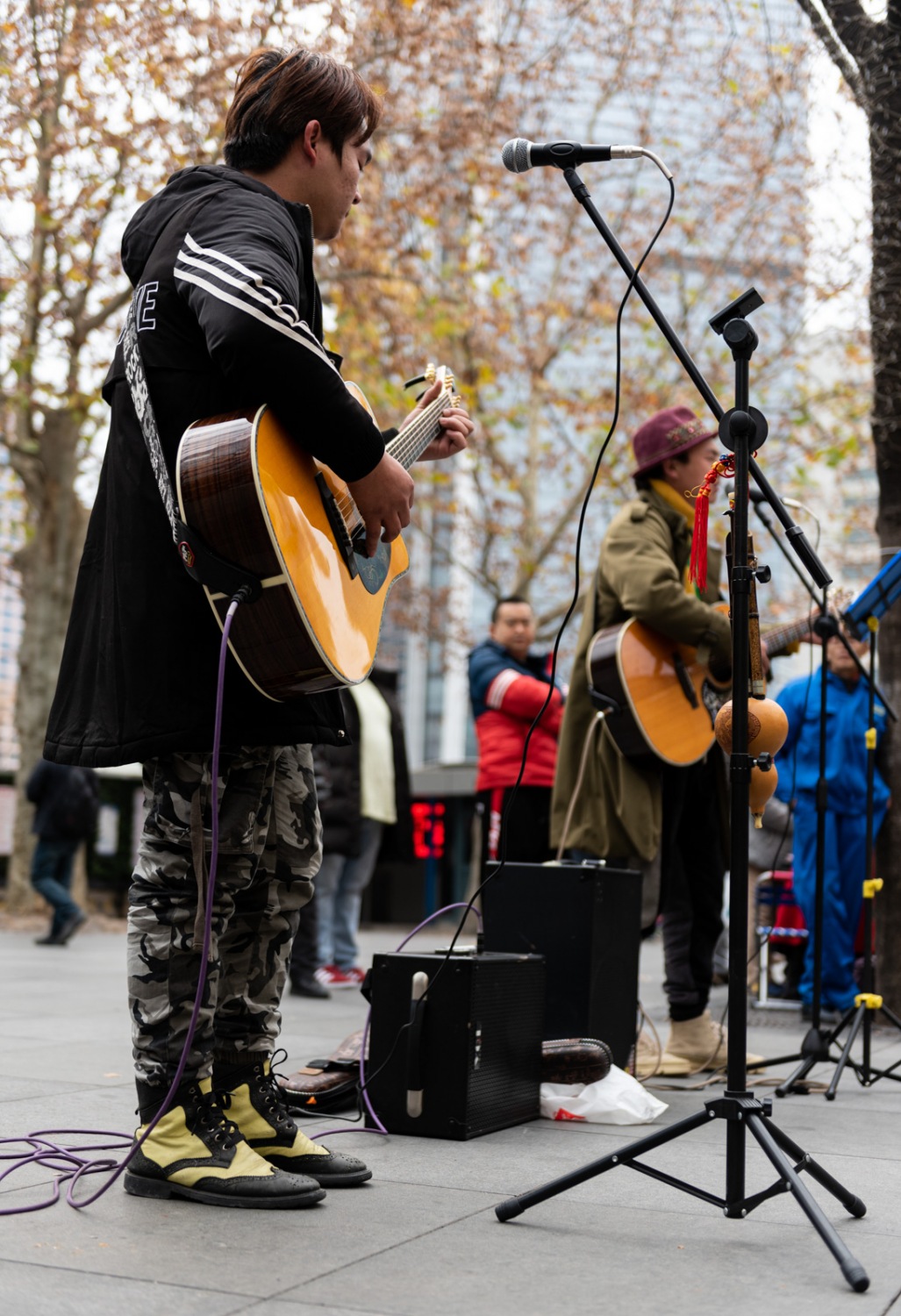 The street musician duo, Zao Meng Zhe (‘’The Dream Makers’’), perform at Jing’an Park, where buskers frequent to play and share their music with passersby. 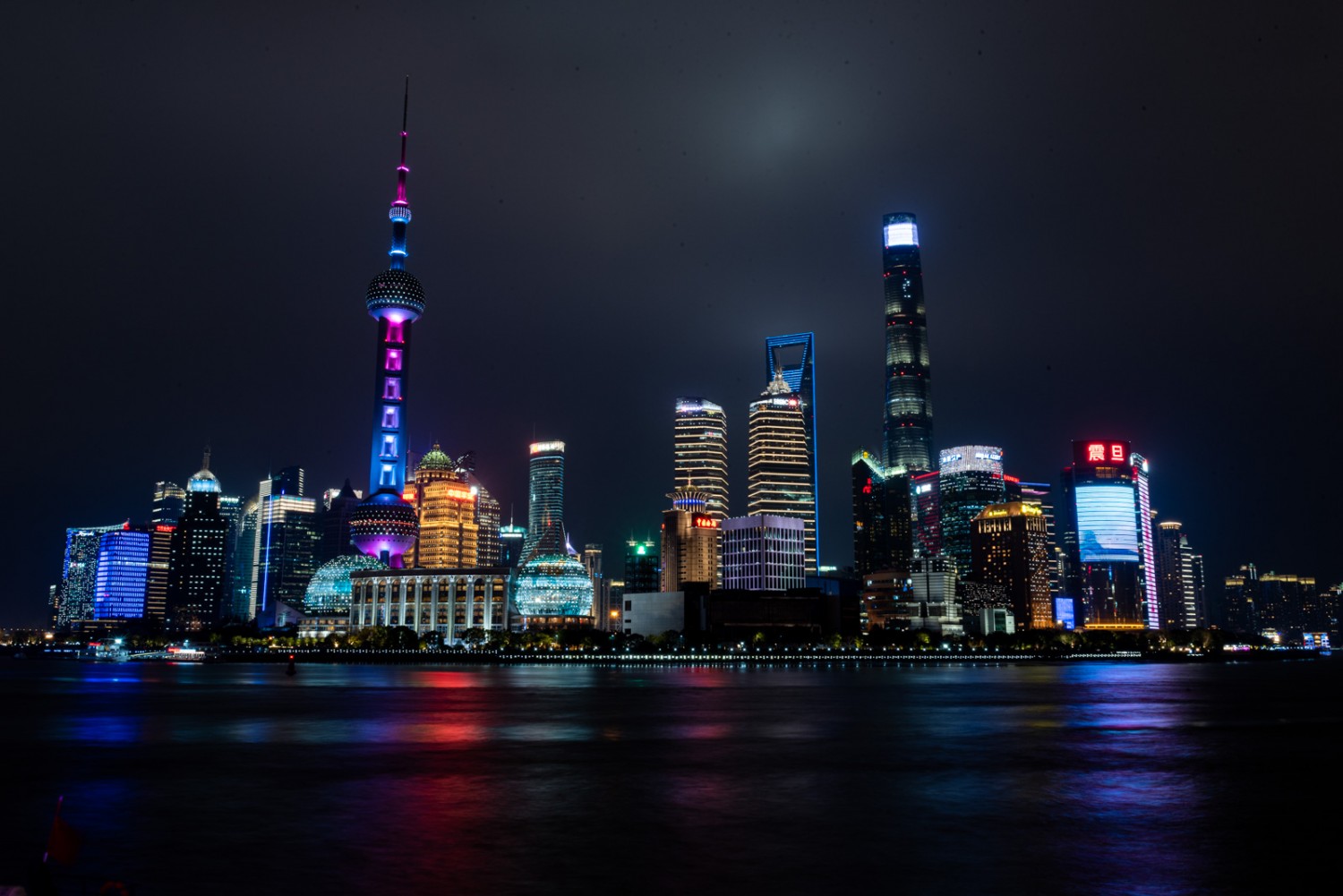 Lujiazui is Shanghai’s central financial district. Its name means ‘’Lu family’s mouth’’ and it was formerly known as Lokatse, which comes from the local dialect of Shanghainese. The locality sits on a peninsula cut out by the Huangpu River across from the Bund, and it boasts the second-highest building in the world – the Shanghai Tower – which stands at 2,073 feet. 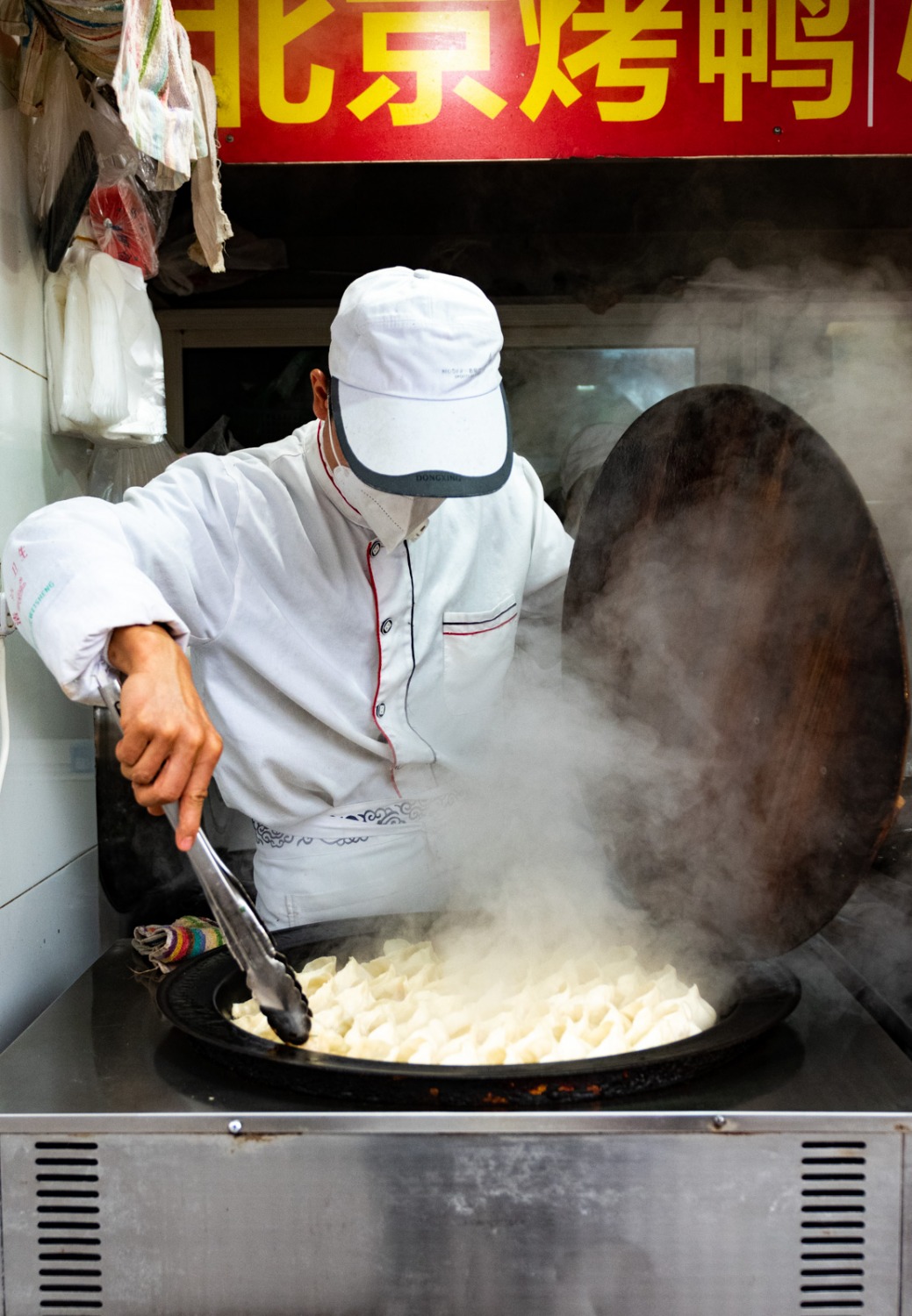 A cook prepares a wok full of pork guotie at the Shuangfeng day market in the Xuhui District. Guotie, or potstickers, is a popular northern Chinese street food and appetizer, as well as a Shanghainese breakfast option. Residents gather daily at local day markets in the morning to get guotie, fried dough sticks, baos and soy milk. 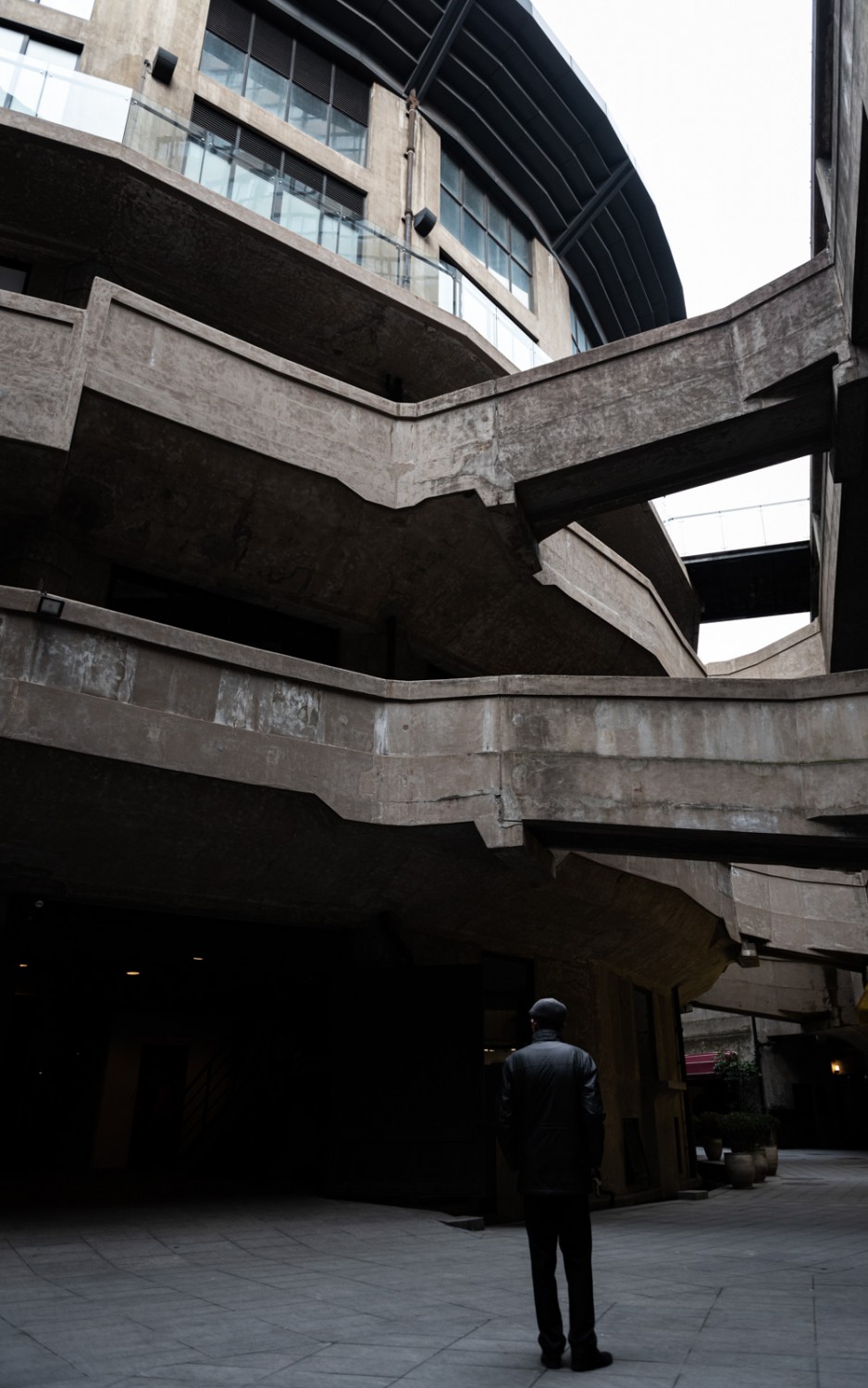 1933 Old Millfun is a circular gotham-deco structure made from concrete and glass and was designed by the British architect Andrew Balfour. Located in the Hongkou District, it used to be the largest slaughterhouse in Shanghai. Since the slaughterhouse’s shutdown in 2002, it has transformed into an entertainment hotspot for food, shopping and photography. 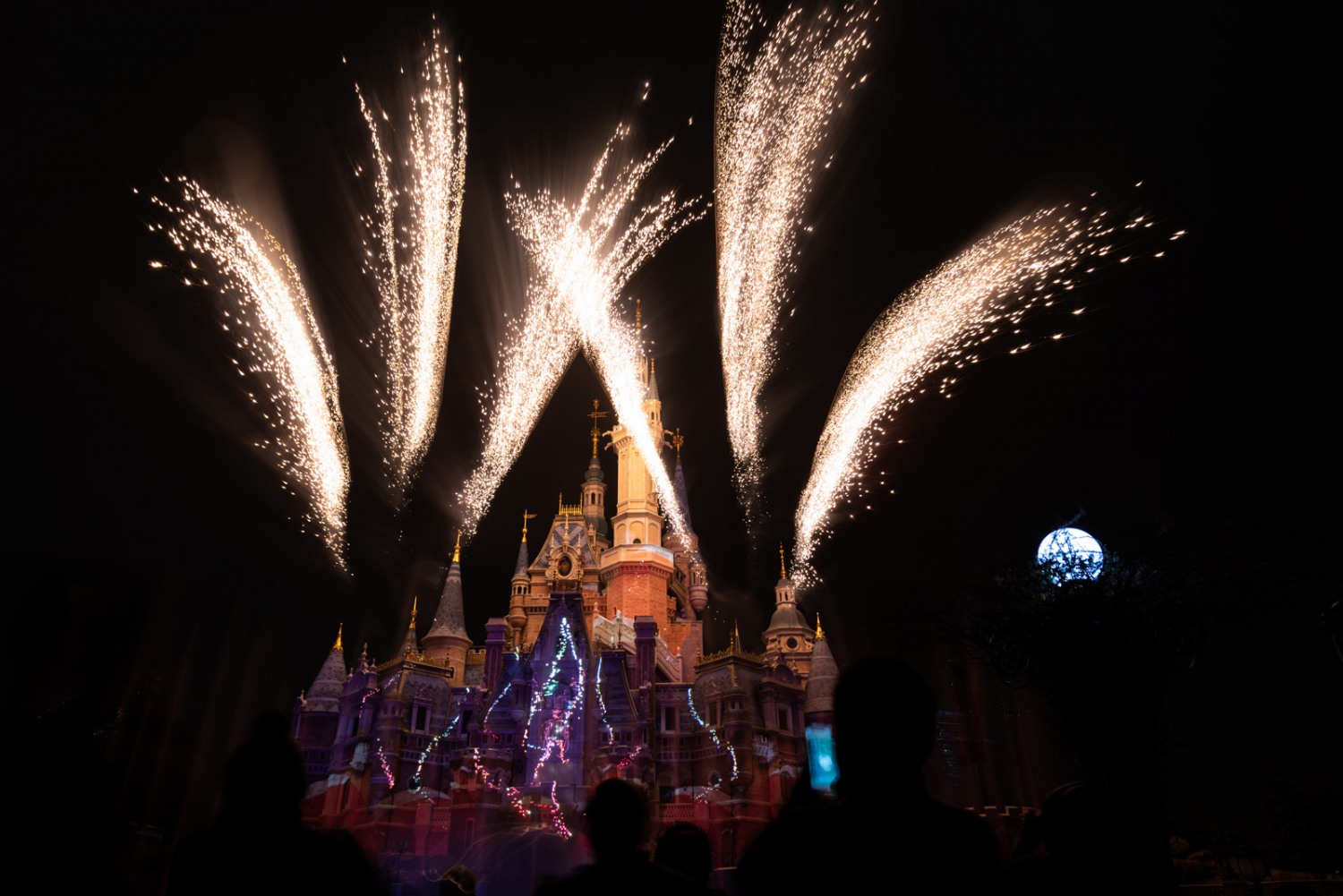 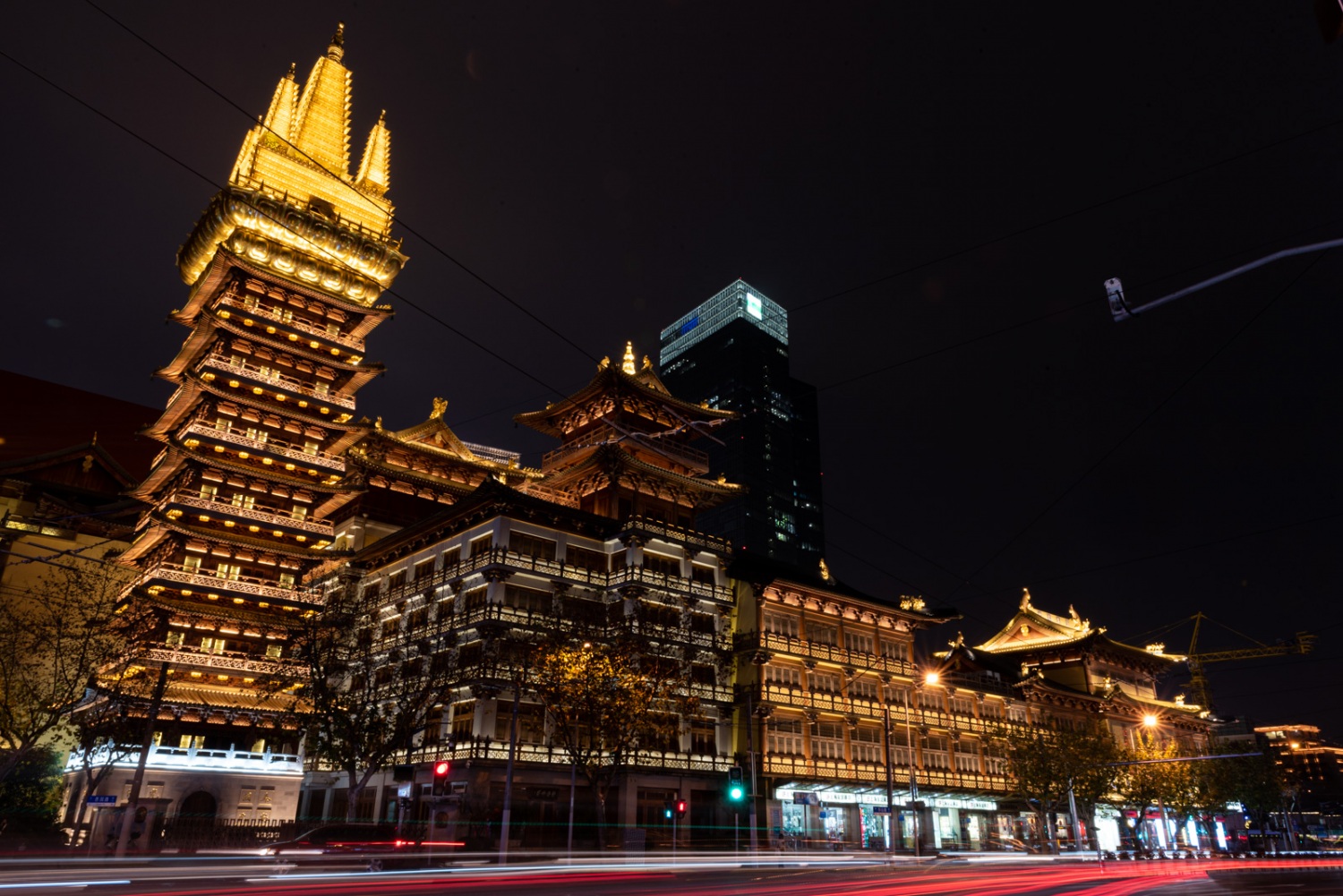 Jing’an Temple, the Temple of Peace and Tranquility, is a Chinese Buddhist temple located at Nanjing West Road, in the Jing’an District. It was built in 247 and once housed a plastic factory in the 1960s during the Chinese Cultural Revolution. Today, it is a popular tourist destination and religious worship site. 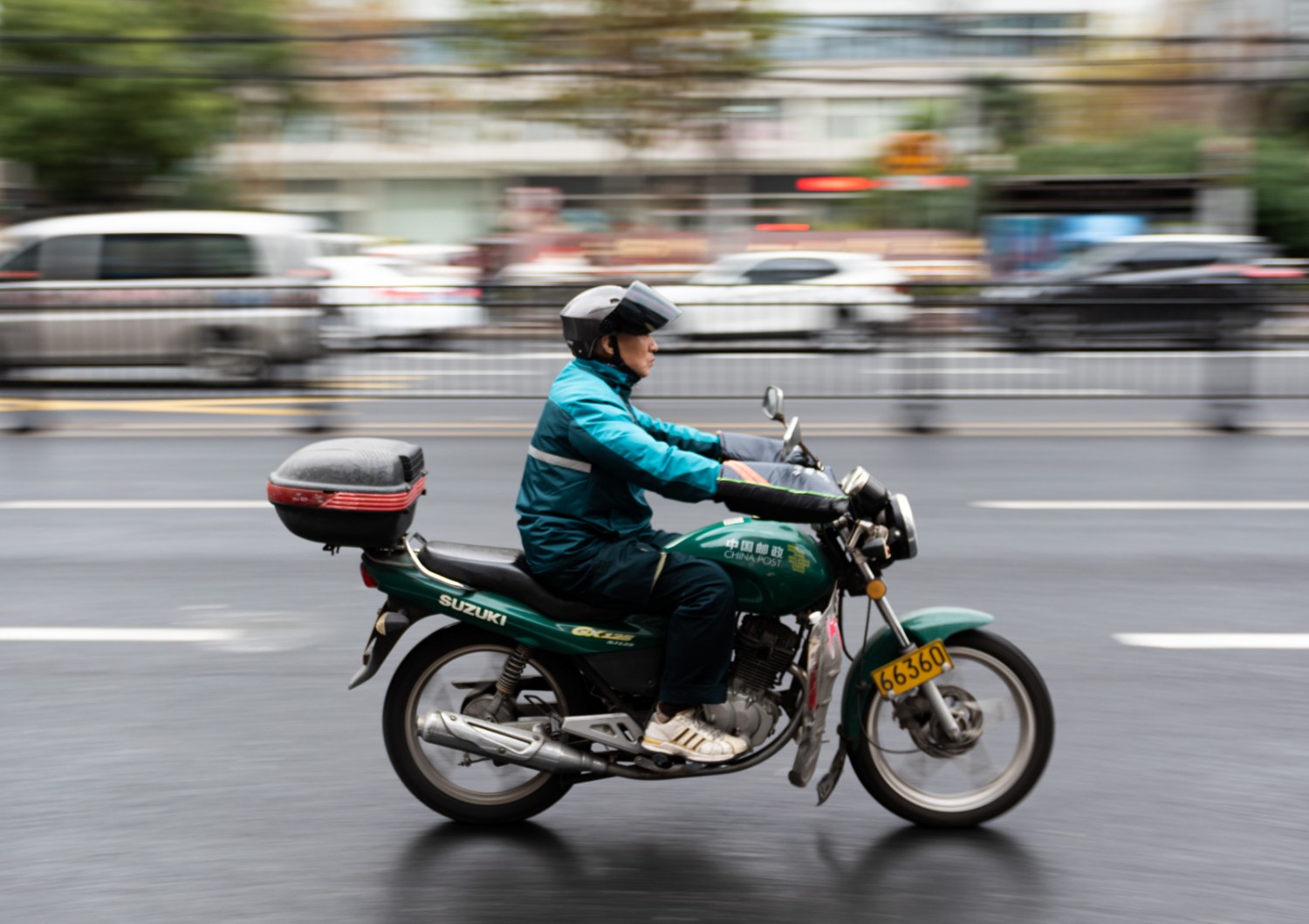 Motorcycles and bicycles are seen almost everywhere in Shanghai. In addition to daily commutes, they are utilized for package, mail and food delivery services in urban and suburban areas in China. 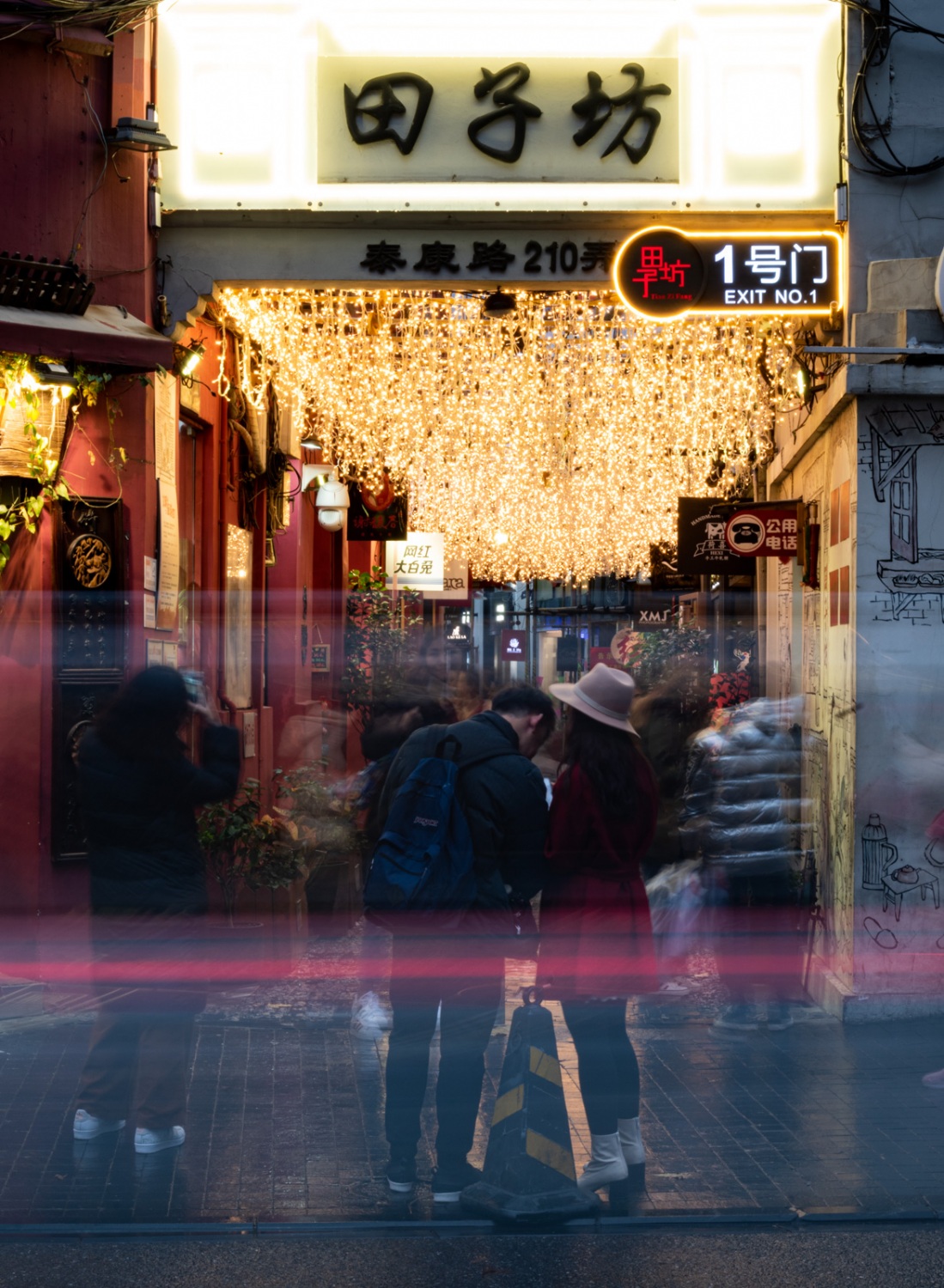 Tianzifang, located off Taikang Road in the Huangpu District, is a tourism center for arts, crafts and food. It adopted its maze-like alleys and Shikumen architecture from what was formerly part of the French Concession in Shanghai. 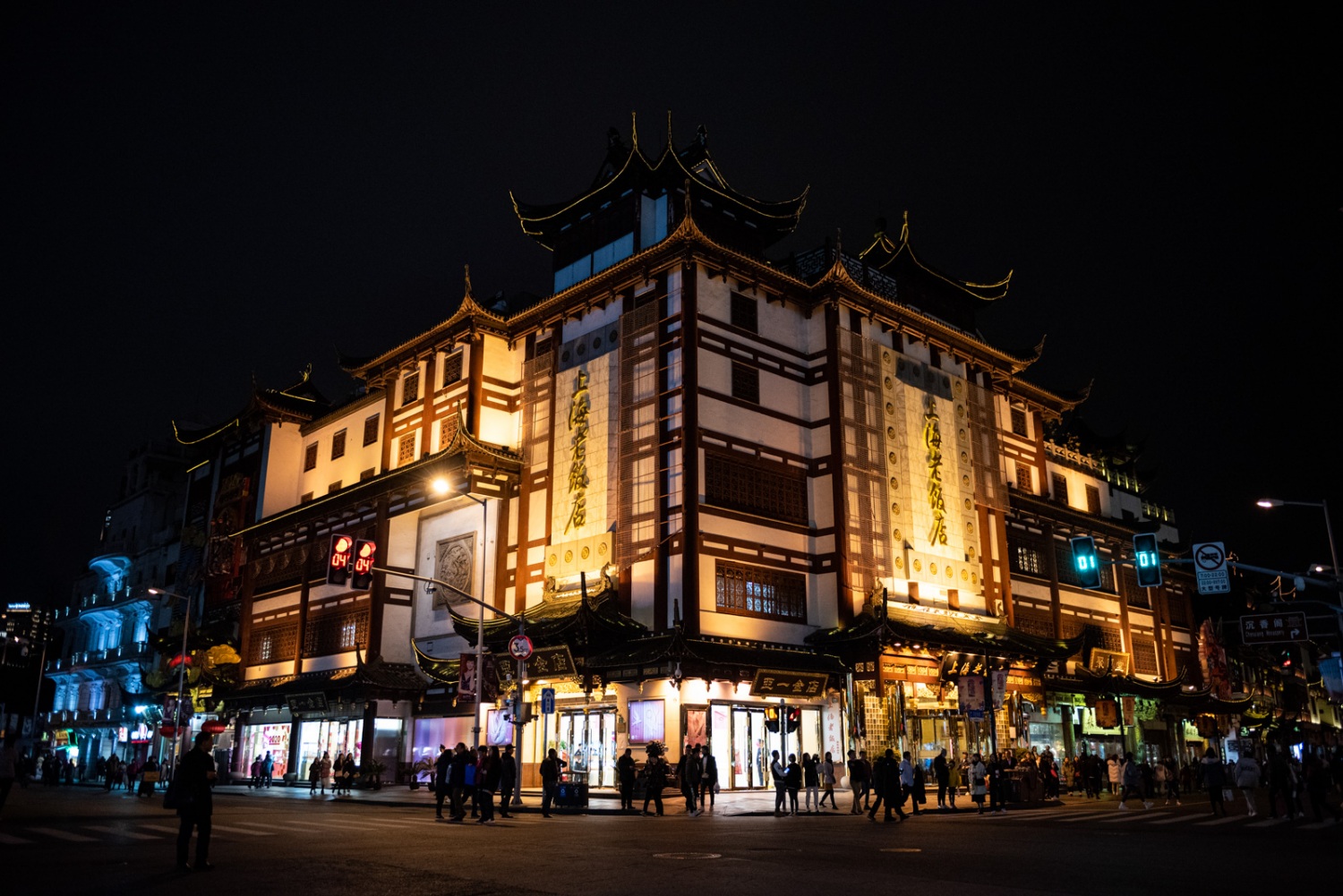 The Yuyuan Bazaar in the Huangpu District hosts a large number of small businesses that sell antiques, jewelry and souvenirs, as well as restaurants like Shanghai Lao Fan Dian (‘’Old Restaurant’’). Also known as Shanghai Chenghuangmiao (‘’City God Temple’’), the commercial district gets its name from a nearby temple that traces its history back to the Ming dynasty. 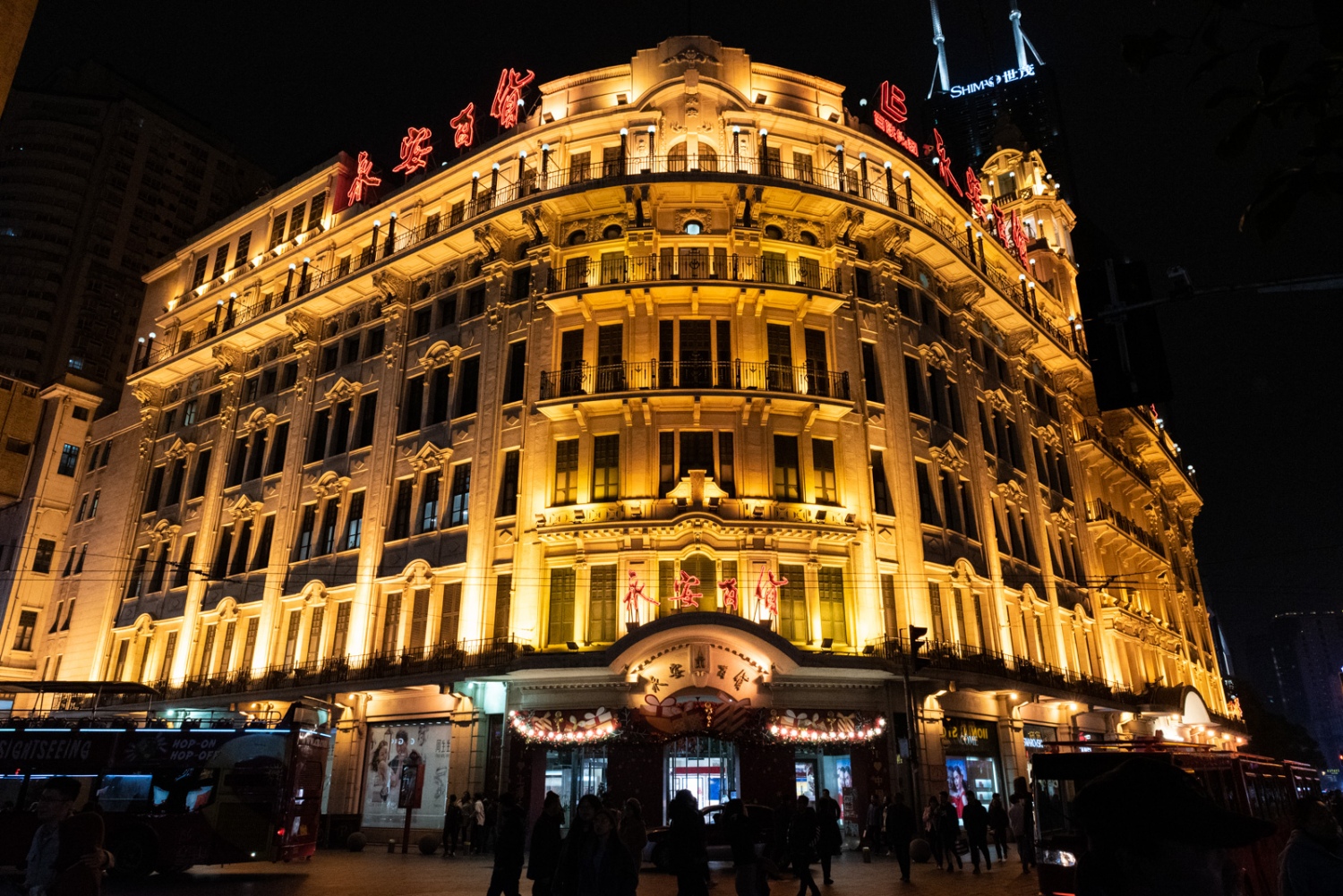 Nanjing Road Pedestrian Mall is one of the world’s busiest shopping streets, and it is home to most of Shanghai’s oldest and largest department stores, including Wing On Department Store (pictured). 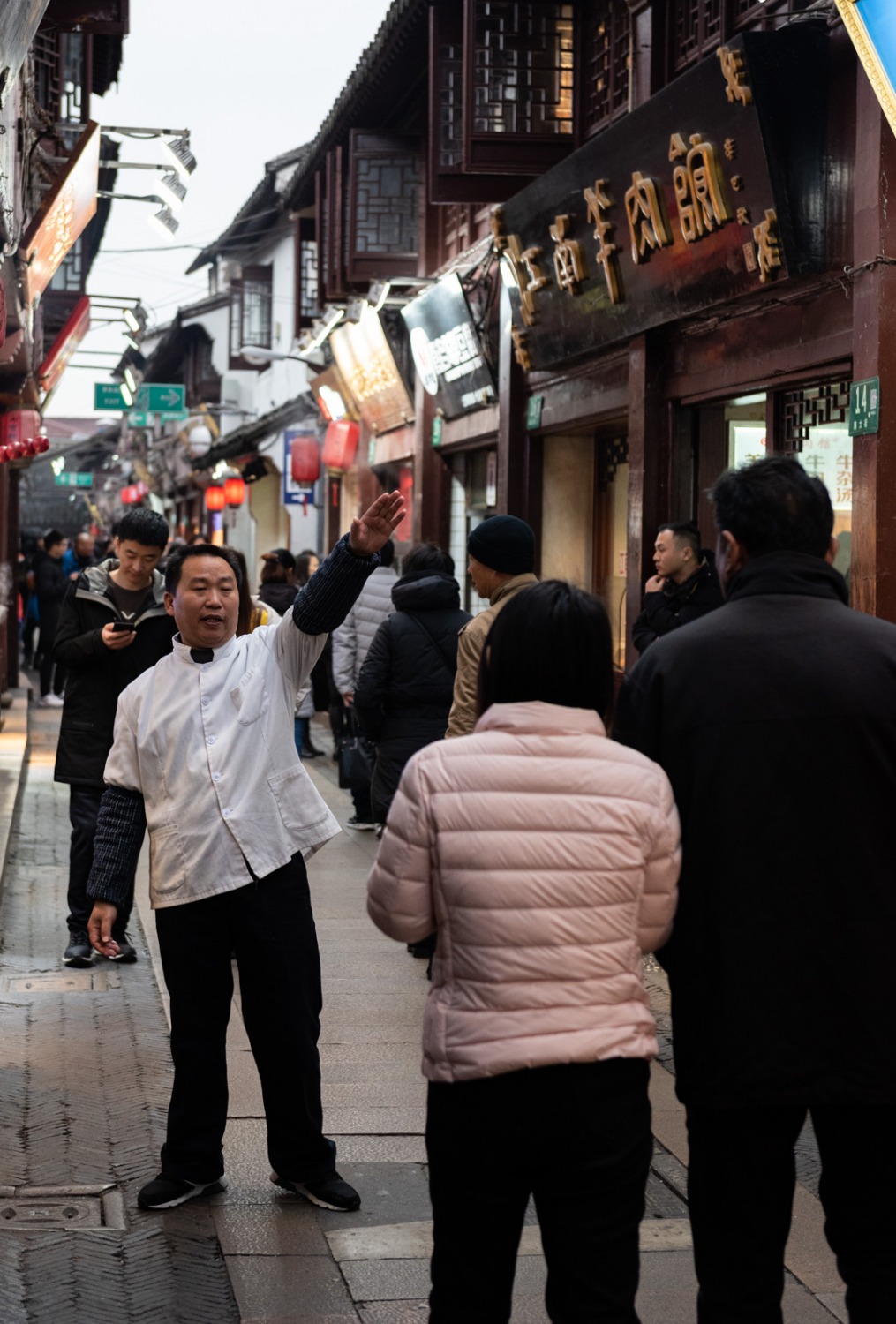 A waiter hollers to bring in business for his restaurant at Shippo (Qibao) Old Street, in the Minhang District. The Shippo Old Street gets its name from a legend regarding seven treasures (‘’qibao’’) located in the area. The town is famous for its street food, notably tangyuan, a Chinese dessert made from glutinous rice flour. 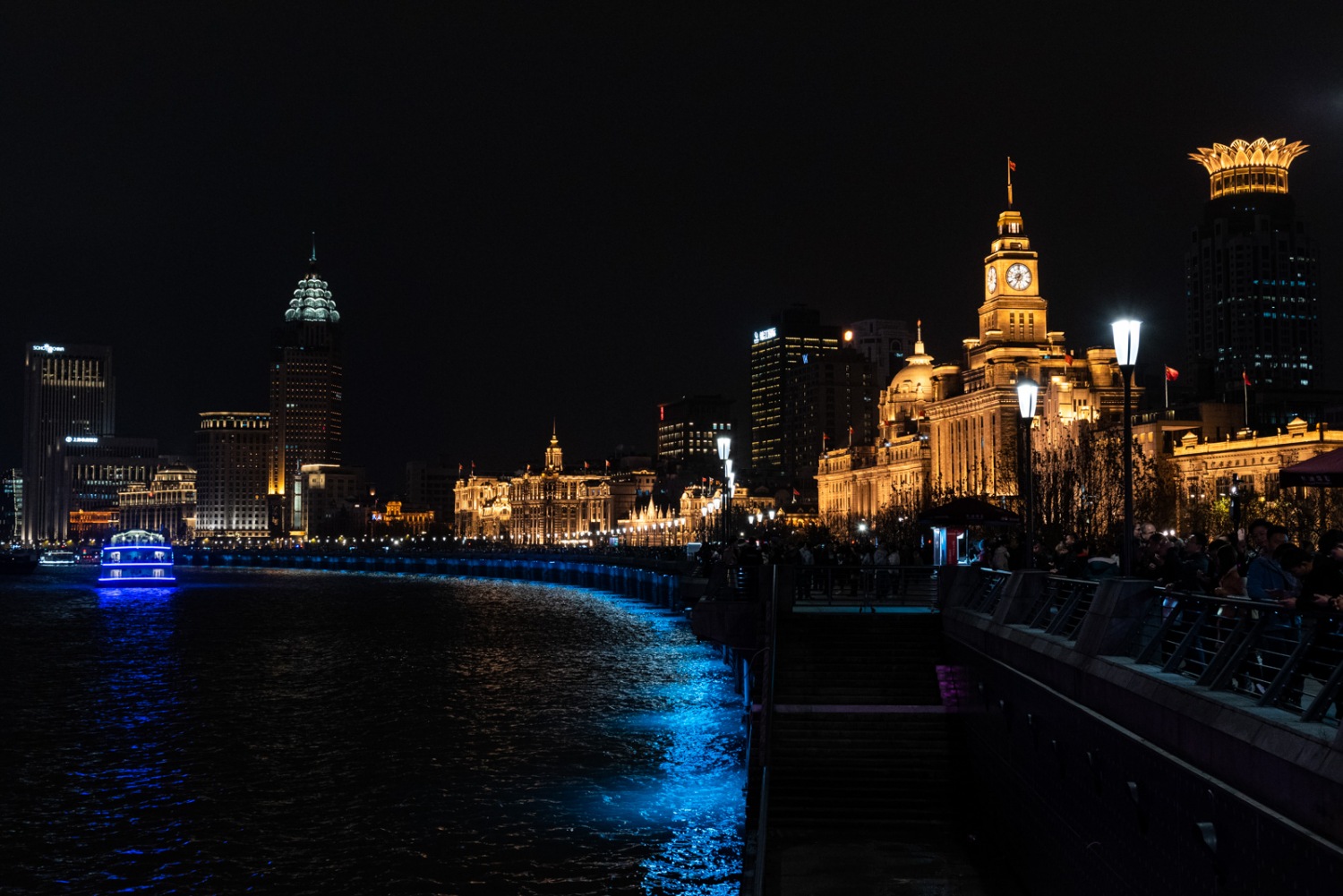 The Bund, or Waitan, in Chinese, is a waterfront area bordering Huangpu River in the eastern part of the Huangpu District. From the mid-19th century through the 1930s, it was a center of foreign establishment in Shanghai, as the city held British, American and French concessions and the Bund became a protected treaty port.