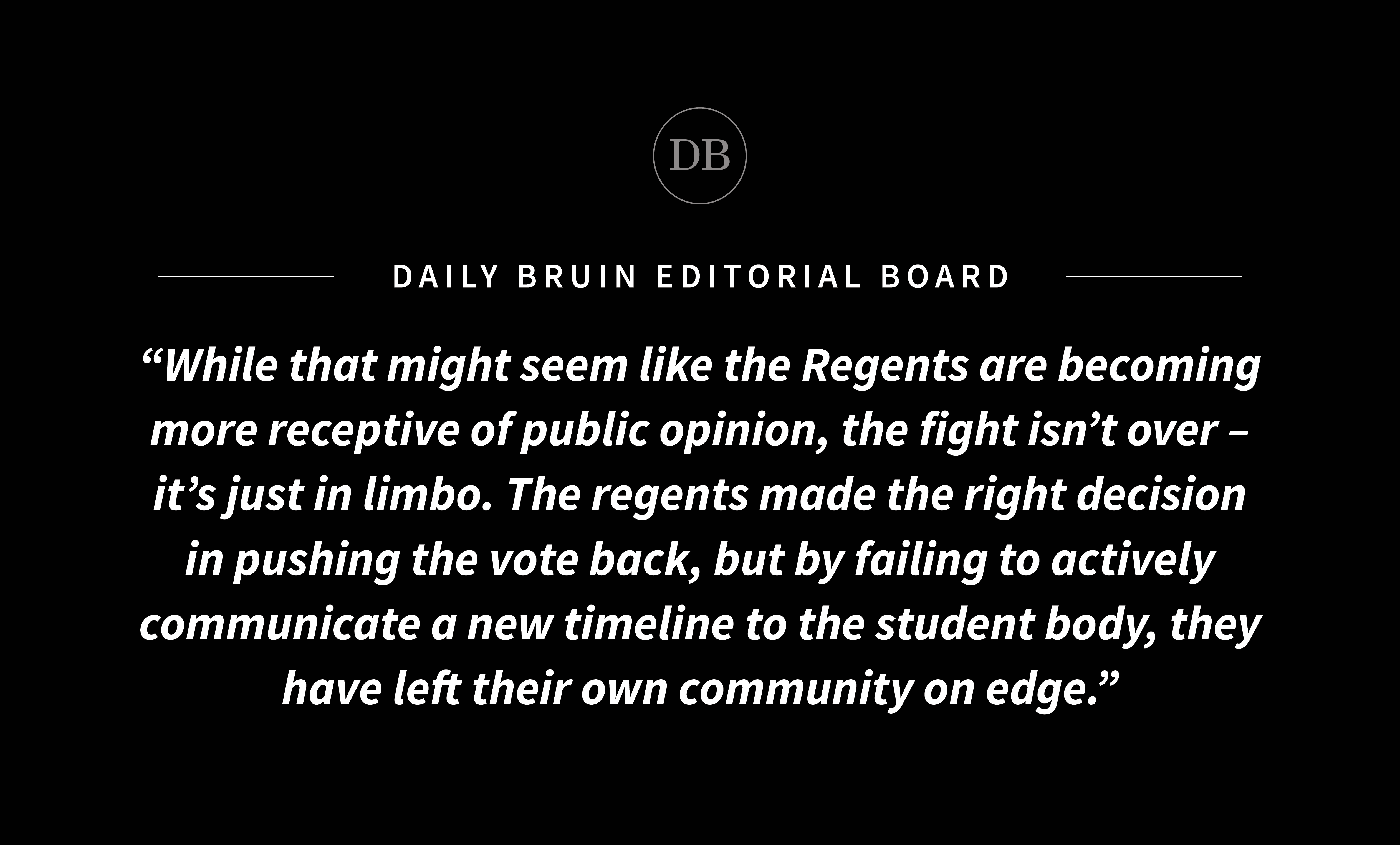 Between a new president and a new decade, 2020 is meant to be a year of change for the University of California.

A tuition hike wasn’t on the docket – until last week, that is.

Two proposed plans to increase tuition made their way onto the UC Board of Regents’ desks recently, in the form of a cohort model and a uniform adjustment model. The former would mean increases for incoming students, and the latter would mean increases for all students. The expectation that the regents would vote on the potential increase by Wednesday was also in the proposal.

Students were predictably unhappy – but this time around, discontent came from all sides.

Based on precedent, tuition hike proposals were presented during the November regents’ meeting, and the regents allowed time for public comment before a vote took place.

Fortunately, public concern led the regents to postpone the vote to a later date that has yet to be determined, allowing for more public feedback.

While that might seem like the regents are becoming more receptive of public opinion, the fight isn’t over – it’s just in limbo. The regents made the right decision in pushing the vote back, but by failing to actively communicate a new timeline to the student body, they have left their own community on edge. In the interim, students and families are left with unanswered questions about the future of their finances, and for some, the affordability of college down the line.

And it’s the affordability of college that prompted a vote in the first place.

The proposed plan included a goal of increasing financial aid available to students; however, California Gov. Gavin Newsom already stated that the state would not be able to accommodate the UC’s proposed budget. And while a tuition increase would surely add to the funding pool, it would effectively take that money from those on the edge of financial stability.

Both proposed models would predict lower costs for families making under $90,000 in the coming decade. But for families making more than that, sharp increases in tuition could alter their ability to pay for college, especially if they’re not receiving any of the financial aid their payments are funding.

And with no mention of a new voting date, that uncertainty will become increasingly unnerving – and unfair – to families in the gray area.

Granted, the UC is stuck between a rock and a hard place – and trying to squeeze as many students as they can between the two. Goals to increase enrollment look increasingly unlikely in the face of existing over-enrollment. Expanding facilities comes at a price point that the state won’t match.

While the regents realized a weeklong turnaround for a major tuition increase wasn’t the right choice, an indefinitely postponed vote isn’t the answer either. And increasing tuition without using the additional money to fix existing problems, like overcrowding, means students get less bang for their buck while the University stays on the path to being unaffordable.

With more time on the table, students will have the public forum they should have been provided from the start.

But that only matters if the regents are willing to listen.