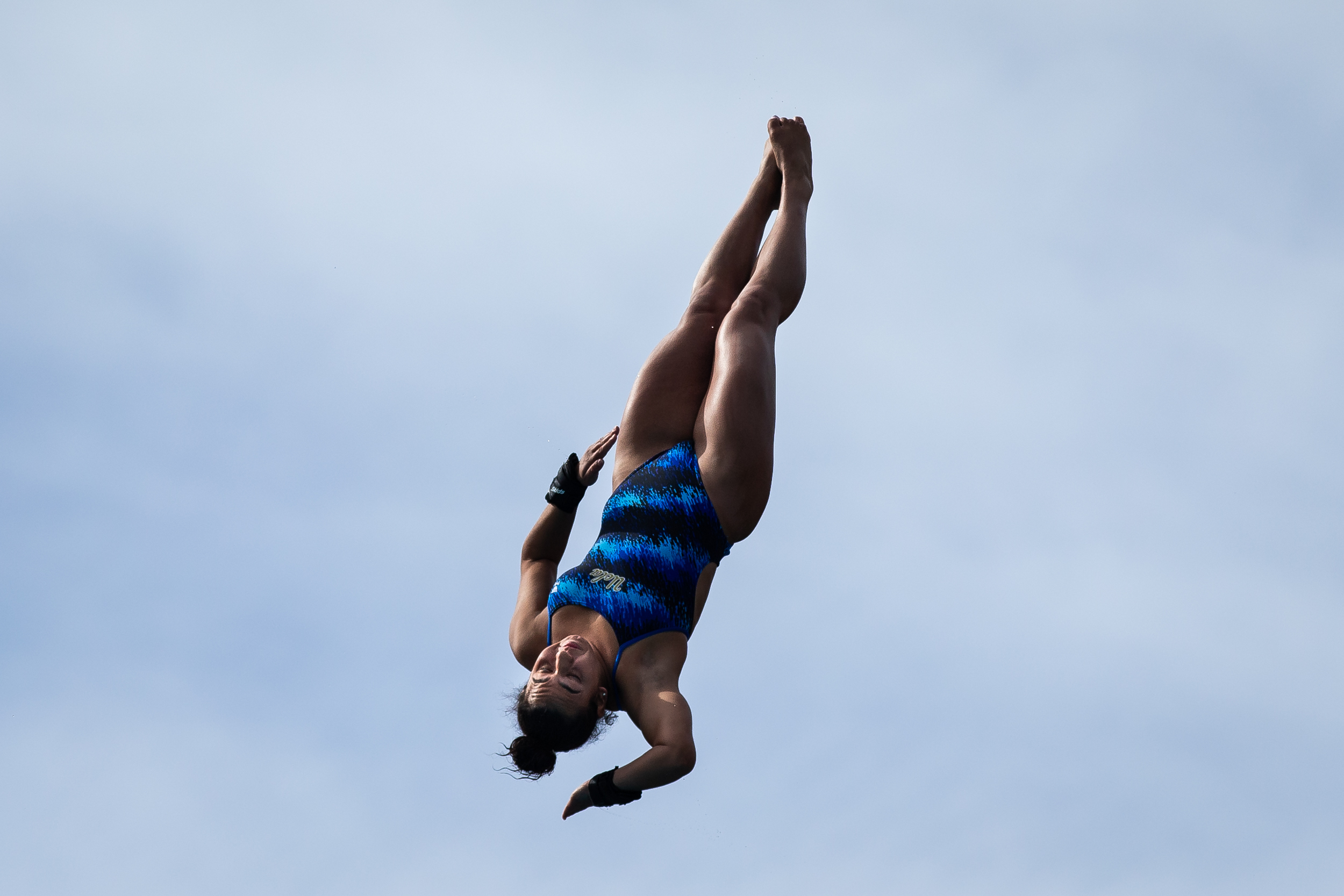 Freshman Katie Shaheen made her debut on platform at the Bruin Diving Invitational this weekend, scoring a 436.90 to take ninth place as UCLA swim and dive’s highest finisher in the event. (Andy Bao/Daily Bruin)

During a weekend when most students may have left town, the Bruin divers were battling to defend home turf against a plethora of collegiate opponents.

UCLA swim and dive (7-0, 4-0 Pac-12) hosted the Bruin Diving Invitational this past weekend, with the meet running from Friday to Sunday.

The Bruins faced off against divers from ranked squads such as No. 4 Stanford, No. 9 USC, and No. 12 Missouri.

Junior Alice Yanovsky said the team was excited about competing against highly ranked opponents this past weekend because it was a payoff for all the work the divers have been putting in so far this season.

“I felt like we were all pretty excited because it’s just what we are training for every single day we do train,” Yanovsky said. “They were looking forward to it.”

Yanovsky was the Bruins’ top finisher on day one, finishing 13th in the 1-meter springboard with a final score of 514.55. She was also able to capture a 14th-place finish in the 3-meter competition on day two of the invitational.

UCLA had two other divers also make the 3-meter finals on day two. Junior Ruby Neave was the Bruins’ highest finisher, taking fourth in the 3-meter with a final score of 613.25, one of six divers crossing the 600 mark in the event. Freshman Katie Shaheen finished ninth with a final score of 562.40 and her personal-best preliminary round score of 286.30 was enough to qualify for the NCAA Zone E Championships later this year.

Neave also recorded a collegiate-best score in the preliminary round, scoring a 322.65 to take third place going into the finals.

With Neave finishing third in prelims and fourth in the finals, she said her performance was very positive, but there were a few aspects of her dives she could improve upon to finish in first.

“I got some pretty consistent hurdles today, which is a big part,” Neave said. “It was more of my entries (into the water) that I need to clean up a little bit.”

Although this was her first time competing on tower for UCLA, Shaheen, on day three, finished ninth in the platform event with a combined total score of 436.90.

As a team, the Bruins finished sixth overall in total points. Diving coach Tom Stebbins said the team’s finish was the result of months of work that are just starting to show.

“I think we are starting to understand the things that we have been working on. Some of that stuff is starting to show,” Stebbins said. “We have seen moments of that. We just haven’t done quite enough of that yet to really be excited.”

UCLA will have a couple of weeks off before it hosts dual meets against both No. 4 Stanford and No. 1 California on Jan. 31 and Feb. 1, respectively.