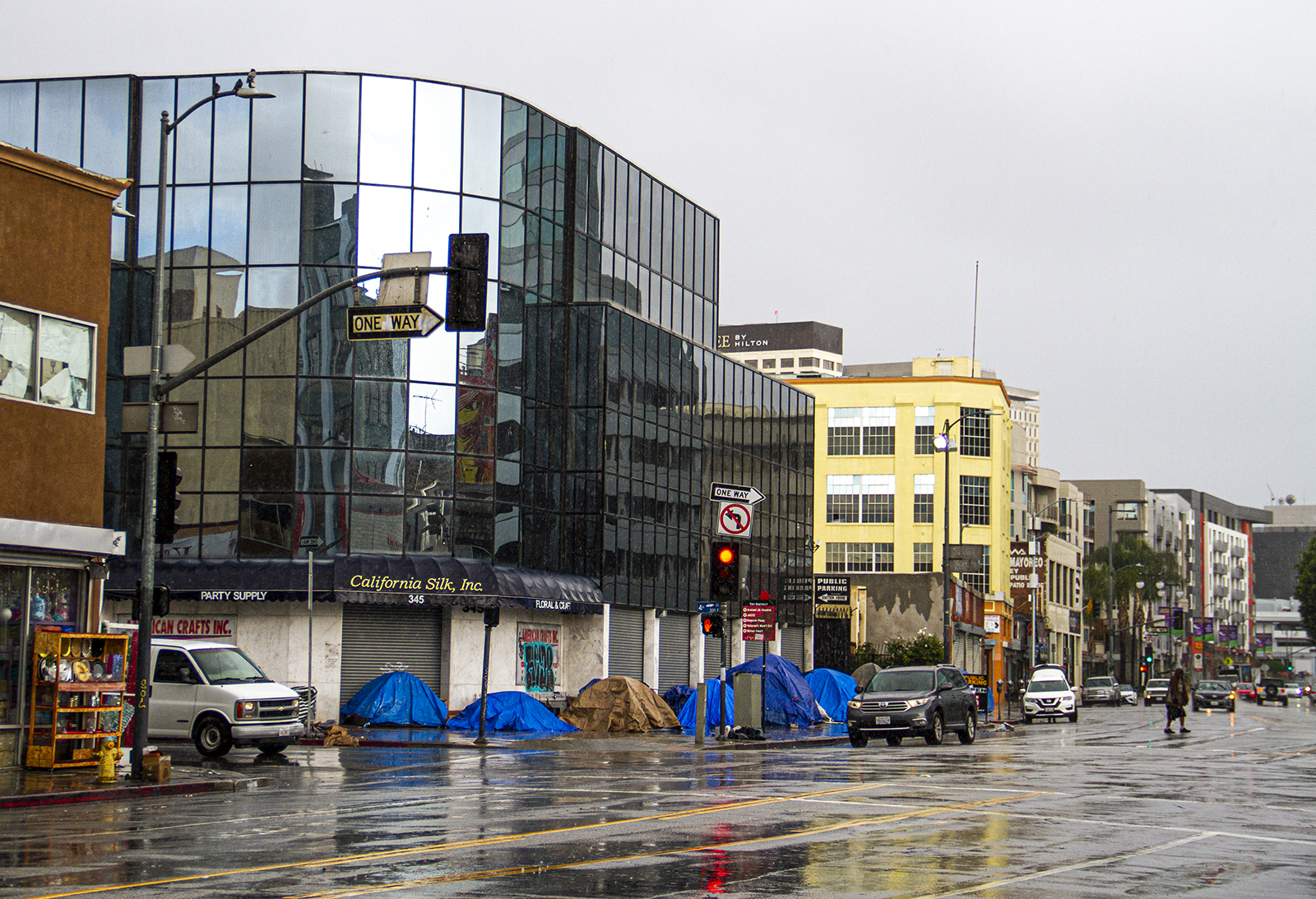 UCLA and University of Chicago researchers have developed a model to predict which Los Angeles citizens are at risk of becoming homeless. Their research also includes a plan to intervene before housing-insecure individuals become homeless. (Tanmay Shankar/Assistant Photo editor)

Researchers at UCLA and the University of Chicago have found a way to predict which Los Angeles citizens are at risk of becoming homeless, opening up avenues to help them before they do.

The California Policy Lab at UCLA and researchers at the University of Chicago Poverty Lab have developed a predictive model using data science that shows when an individual is likely to become homeless. Their research, announced in a December press release, also includes a plan to intervene before housing-insecure individuals become homeless.

Los Angeles County plans to launch a multidisciplinary Homeless Prevention Unit in this year, which will use the model to reach out to the individuals who are identified as most at risk of homelessness before they become homeless.

The unit will be funded with $3 million from Measure H, a proposal on the LA County ballot that passed in 2017 with the aim to provide services for people experiencing homelessness.

Using records from 2012 to 2016, the researchers devised a model and used it to predict the incidence of homelessness for the year 2017.

The researchers then tested the accuracy of the model’s predictions against the county records. Among the top 3,000 individuals that were identified to be most at risk of becoming homeless, about 46% actually became homeless.

The county had been using this data to identify individuals experiencing homelessness who used a large amount of county resources, said Till von Wachter, a UCLA economics professor and the faculty director of the California Policy Lab. However, the researchers realized that same data could be used to identify people who are at a high risk of becoming homeless, he added.

“We had a conversation with the county of how data could be used to address various aspects of the homelessness crisis,” von Wachter said. “Homelessness prevention came out as a potentially very fruitful way of using this data.”

The records are anonymized, but contain information such as when an individual went to the emergency room and why; if they were arrested; or if they received drug treatment, welfare or housing subsidies, von Wachter said.

The data allows researchers to see when certain types of service patterns are predictive of a new homelessness spell, von Wachter said.

“The algorithm uses all possible service combinations to estimate for each individual a probability of becoming homeless in a given month,” von Wachter said. “Using those probabilities, we can generate a list of individuals who are at highest risk of homelessness.”

Identifying a shortlist of common factors that lead to homelessness is difficult, as there is a high amount of diversity among people on the verge of becoming homeless, von Wachter added.

A sudden increase in the times an individual uses a specific county service is an indicator, von Wachter said. Another factor, he added, can be if an individual uses services from agencies located in different parts of the city, suggesting that the individual is moving across the city.

“So the frequency, density and spatial distribution of services are often leading indicators,” von Wachter said.

The Poverty Lab and the California Policy Lab are currently working on evaluating their model, though there is not yet a specific way the homeless prevention program will be tested, von Wachter said.

Kathleen Len, a fourth-year molecular, cell and developmental biology student and external vice president for Bruin Shelter, said she thinks this predictive model is a step in the right direction. Bruin Shelter manages a shelter for students experiencing homelessness.

“The best-case scenario would be if we could stop your problems before it happened, so I think it’s a good idea,” Len said. “It seems like if they are able to provide resources to people who will need them, then that is definitely a step in the right direction.”

“These specific actions will not, in and of themselves, transform the reality of homelessness in Los Angeles County,” Ansell said. “At the same time, however, they have the potential to make a meaningful contribution to a broader array of efforts to reduce the number of people becoming homeless each day in Los Angeles County.”