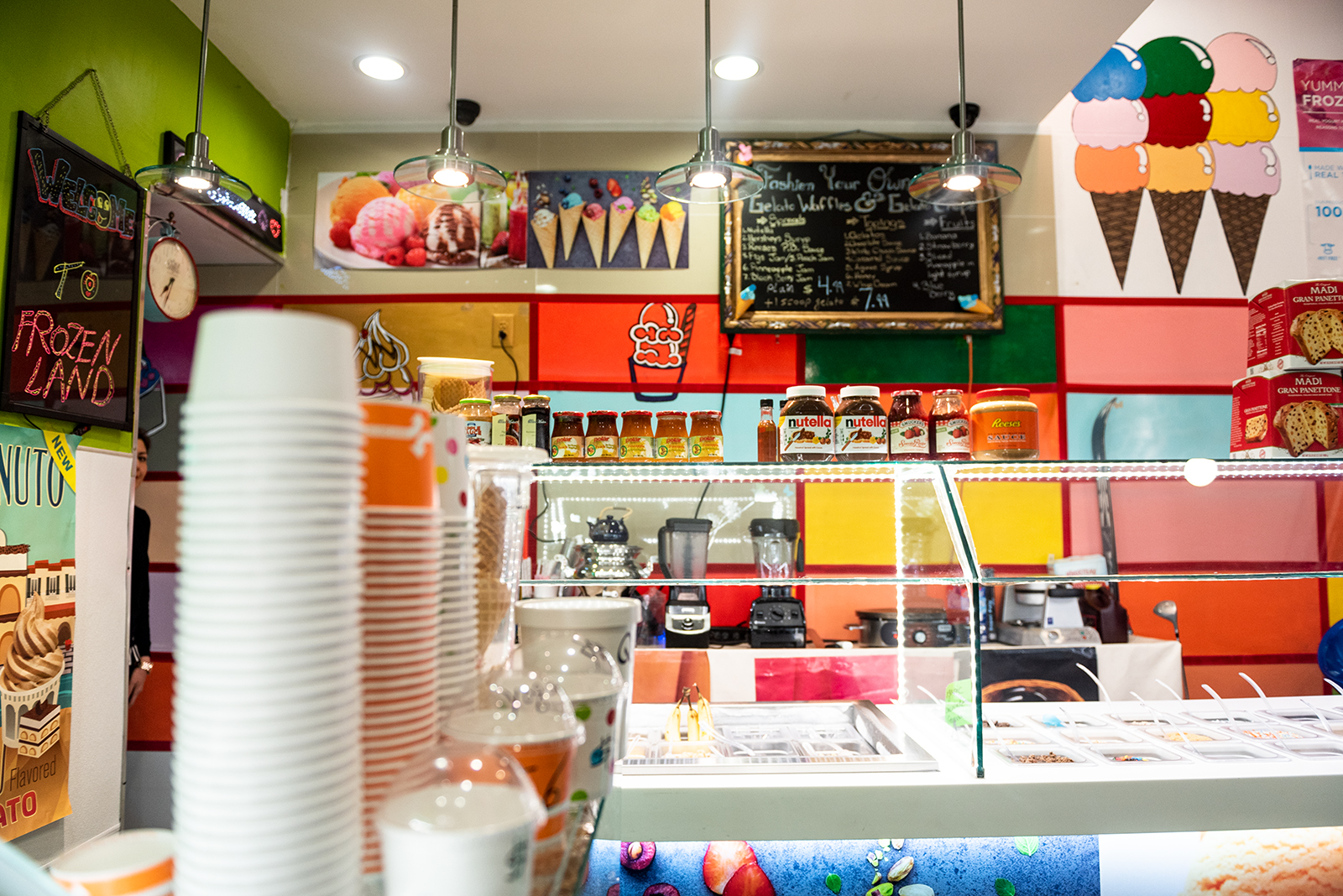 Frozenland is a new dessert joint on Lindbrook Drive that occupied a spot vacated by Yogurtland. The shop aims to entice students with a variety of desserts such as frozen yogurt, gelato, waffles and crepes.
(Niveda Tennety/Assistant Photo editor)

Frozenland Ice Cream & Yogurt was opened in November by Joseph Yoush, a local businessman who believes that his store offers a diverse variety of dessert options that other frozen yogurt and ice cream specialty shops do not.

“We have frozen yogurt, we have gelato, we have waffles, we have crepes. Nobody has all of them in one place, and I think that’s unique,” Yoush said.

Frozenland is located at 10911 Lindbrook Drive, a unit formerly occupied by Yogurtland, another frozen yogurt shop. The joint arrives at a time when the Village is experiencing a vacancy rate of over 20%, raising questions about business prospects for new arrivals such as Frozenland.

Yoush said he chose the location because of its proximity to Ronald Reagan UCLA Medical Center and UCLA’s campus.

Yoush lived in Boston prior to Los Angeles, where he owned grocery and convenience stores. He now owns car washes in Downtown Los Angeles and El Monte, California.

He said he is optimistic about Frozenland’s capacity to appeal to students, though he points out the difficulty of operating a business in Westwood as opposed to Boston or greater Los Angeles.

“(In Westwood), it costs four, five times more than in those other places,” Yoush said.

Yoush said he was frustrated with the regulations in Westwood Village, which he thinks are more rigorous than in other locations. He added the stipulations around signage and outside advertisement were particularly cumbersome obstacles for him.

“Westwood Village has rules in addition to the state laws regarding the sign (and) exterior decoration,” Yoush said. “Let’s say I’m looking at a sign company, they don’t want to go through the process with Westwood.”

Businesses like Frozenland can benefit from the Village’s walkability and UCLA’s massive student population, but they can also face regulatory challenges.

Thomas said he feels that the plan’s broad interpretation of “fast food” in combination with requirements for parking are chiefly to blame for Westwood Village’s high vacancy rate.

He said that Frozenland replaced Yogurtland because Lindbrook Drive is at capacity for what the specific plan defines as fast food. Thomas said this definition not only includes traditional fast food restaurants like In-N-Out Burger, but also fast-casual businesses such as Tocaya Organica and even the now-defunct sports bar Sepi’s.

The WVIA has plans to revise this definition to allow greater freedom so that more student-aimed businesses like Frozenland can open in the Village, Thomas added.

“We actually have made two recommendations that are being reviewed by the city of Los Angeles (Department of City Planning),” Thomas said. “One of the plans is to amend the definition for fast food in the plans. Right now there is fast food and restaurants – only two.”

Thomas added that another item the association seeks to change is the district’s parking requirements for businesses.

“They’re strict, onerous and certainly more restrictive than anywhere else,” Thomas said. “They go a long way in discouraging development in our district.”

Thomas added that businesses coming and going in Westwood is a natural process and not a cause for alarm.

“My real fear is that businesses will stop coming,” he said.

Some students said they’re aware of the vacancies in the Village, and some attribute it to the lack of businesses that appeal directly to students.

Carl Macpherson, an undeclared second-year student, said that he thinks the vacancy rate is related to the expensive nature of businesses in West Los Angeles.

“Westwood is really expensive, and students just don’t have that kind of money,” he said. “When I go there, I go to Target or Ralphs, I’m not really looking to shop around or anything.”

Taylor Lewis, a second-year psychobiology student, said she thinks Frozenland has potential, but is also aware of the high turnover in the Village.

“It’s something that’s different for the area; we don’t have a lot of dessert places. It could be something great, and if it’s not, it will be just another vacant space,” she said.