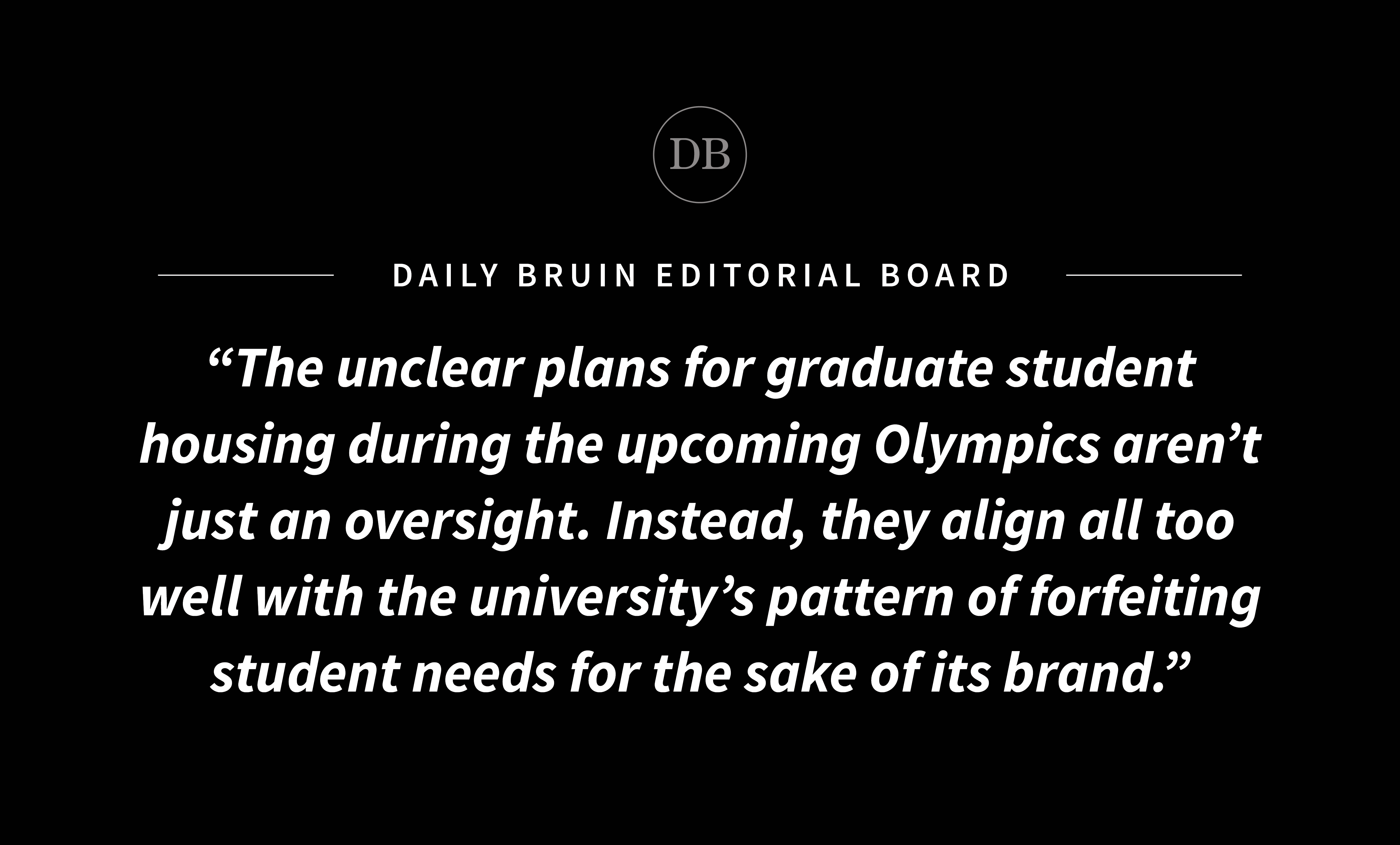 Administrators have made it clear that UCLA housing will be filled to the rafters by world-class athletes for the Olympics in 2028.

When it comes to students, however, the plan is a lot shakier.

When UCLA Administrative Vice Chancellor Michael Beck met with the North Westwood Neighborhood Council on Jan. 8, he said the 2028 Summer Olympics will force graduate students living in Weyburn Terrace to temporarily move to other UCLA Housing properties to make room for Olympic athletes. Beck added in the same meeting that UCLA still has a long way to go in guaranteeing housing for graduate students when the time comes.

The university has teamed up with the city of Los Angeles to undertake massive expansion programs in order to be ready for the summer festivities, since the UCLA campus will operate as the Olympic Village for athletes, officials and athletic trainers.

But the way things are looking, students will be left on the sidelines.

UCLA loves to market its expansion toward guaranteed housing for all students – but those words feel increasingly cheap when housing world-class athletes comes before housing financially unstable students. The unclear plans for graduate student housing during the upcoming Olympics aren’t just an oversight. Instead, they align all too well with the university’s pattern of forfeiting student needs for the sake of its brand.

And students can’t afford those forfeitures.

UCLA spearheaded new goals and proposed a five-project plan in 2017. The university has since downsized from an initially promised 6,900 beds and negotiated a reduction in building sizes.

Beck said UCLA is still on track to complete 5,200 new beds by the 2021-2022 school year in hopes of eventually guaranteeing four years of housing for incoming freshmen and two years for transfer students.

These changes might offer one more year of housing security for undergraduates, compared to the current three years. But with UCLA falling short of its 2020 Zero Waste initiative and Centennial Campaign subtarget to raise $1 billion for student scholarships, backpedaling on its housing goals feels all too familiar.

By following through with projects designed to help graduate students access affordable housing now, the university can avoid the disaster of relocating them during the 2028 summer festivities.

But while the university acts on its fervor to house the world’s elite athletes, those student projects are left in an uncomfortable limbo.

It’s difficult not to feel like students are being thrown on the sacrificial fire of university branding, especially when kicking students out of housing comes on the heels of vague promises to help those experiencing housing insecurity.

Granted, there is usually some backlash when the Olympics come to town. Cities and universities will always have their own problems to fix, and residents will always demand those problems take precedence over the next torch lighting. But faced with the highest rent in California and barely enough housing, pulling the rug out from under students will still feel like a cruel joke eight years down the line.

So as UCLA continues catering to Olympic organizers and construction teams focused on the future, Bruins will continue to suffer in the present.

Landlords in Westwood are notoriously difficult.

But if UCLA keeps this behavior up, it will be the worst of them all.