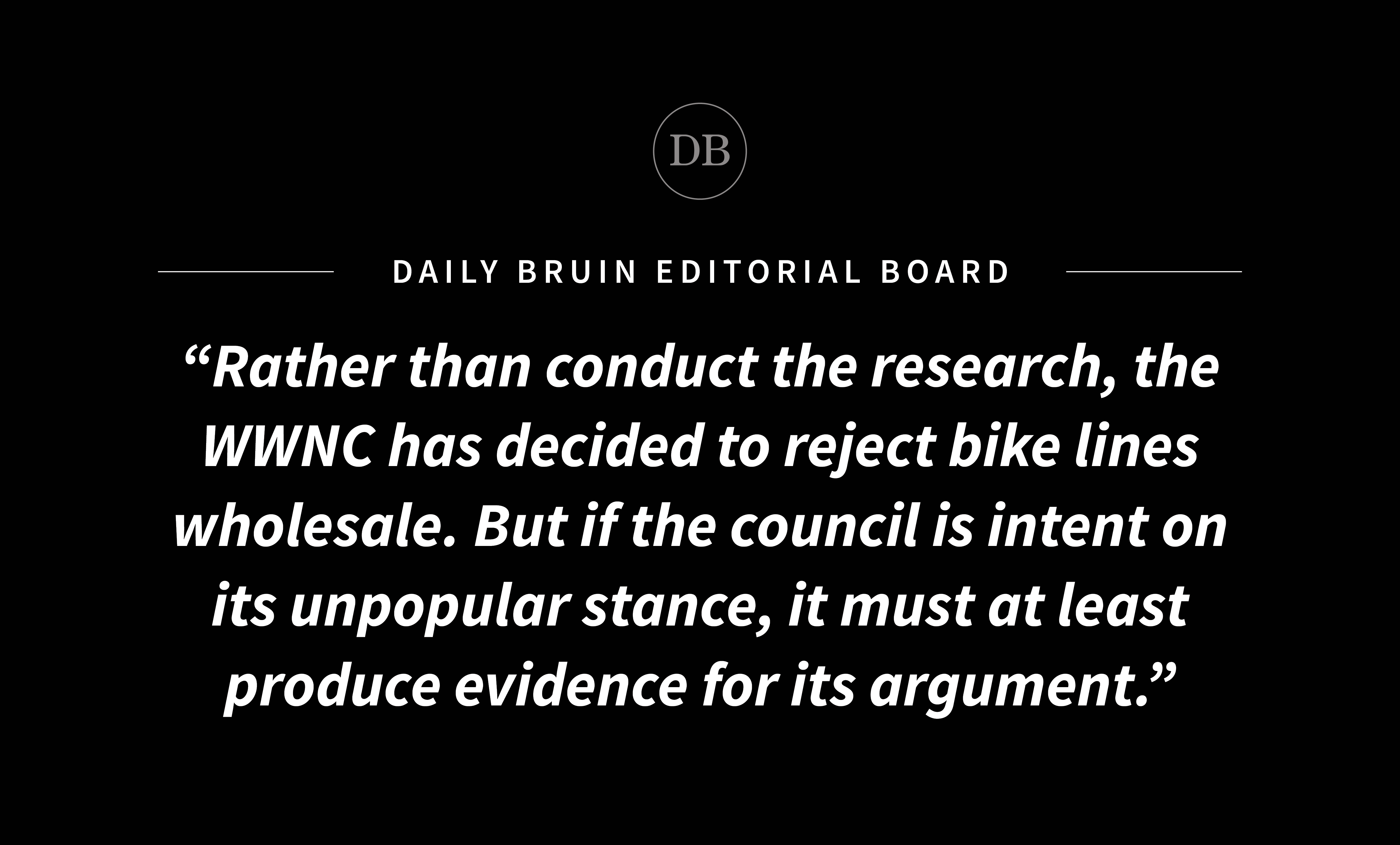 Bicycle lanes in Westwood have hit a roadblock – and feuding neighborhood councils are partially to blame.

The proposal was shot down in early December, when the WWNC cited safety concerns and the Metro’s upcoming Purple Line station in Westwood. They insisted on a traffic analysis to determine feasibility despite Westwood residents showing interest in the project for years.

But plans for a safety study have yet to materialize.

Rather than conduct the research, the WWNC has decided to reject bike lines wholesale. But if the council is intent on its unpopular stance, it must at least produce evidence for its argument. Bike lanes would promote affordable and sustainable commuter practices, give students more avenues to explore local businesses and help keep e-scooters in their place.

Not only is the WWNC rejecting bikes – they seem to be rejecting the science.

A 2019 study from the University of Colorado Denver found that biking infrastructure is associated with lower fatality rates in cities with frequent cyclists. And with piles of motorized scooters populating the sidewalks of Westwood, bikers wouldn’t be the only ones to benefit from clearer streams of traffic.

Los Angeles has one of the highest populations of electric scooters and bikes in the country, and pedestrian safety has been a constant debate since their rise. But Westwood is falling behind the times, with those in charge arguing against an infrastructure upgrade that benefits cyclists and drivers alike everywhere else in the world.

The WWNC’s current proposal will only serve to deter cyclists from a cleaner, healthier and cheaper alternative to cars.

It’s safe to say the creation of cycling lanes would encourage bike usage, which would decrease the dependence on other modes of transportation – fewer cars means less carbon dioxide emission into an already polluted atmosphere.

And beyond the environmental impact lies accessibility for UCLA’s commuter students.

Bikes are far more affordable for Bruins than automobiles. With a large population of college students known for using ride-hailing services like Lyft and Uber to go short distances, adding another option for quick travel could also cut down on expenses for many – especially those who already can’t afford to live in the increasingly pricey Village.

A safety study can’t hurt, but the WWNC should take initiative and ask the city to complete it. Instead, the council prefers to hinder the NWWNC from making changes it deems best for the region it represents.

Even in the unlikely event that a study proved bike lanes were unsafe, they remain relatively safer than a collection of roads shared between cars and riders. The NWWNC is backed by science as well as its residents – including one who went as far as to paint their own bike lanes on the street – and the WWNC is unjustified in hanging onto a thinly veiled argument.

The WWNC seems intent on waiting for safety analyses, which they decline to conduct.

So in the meantime, bike lanes might be nothing more than some spray paint in the hands of frustrated residents.