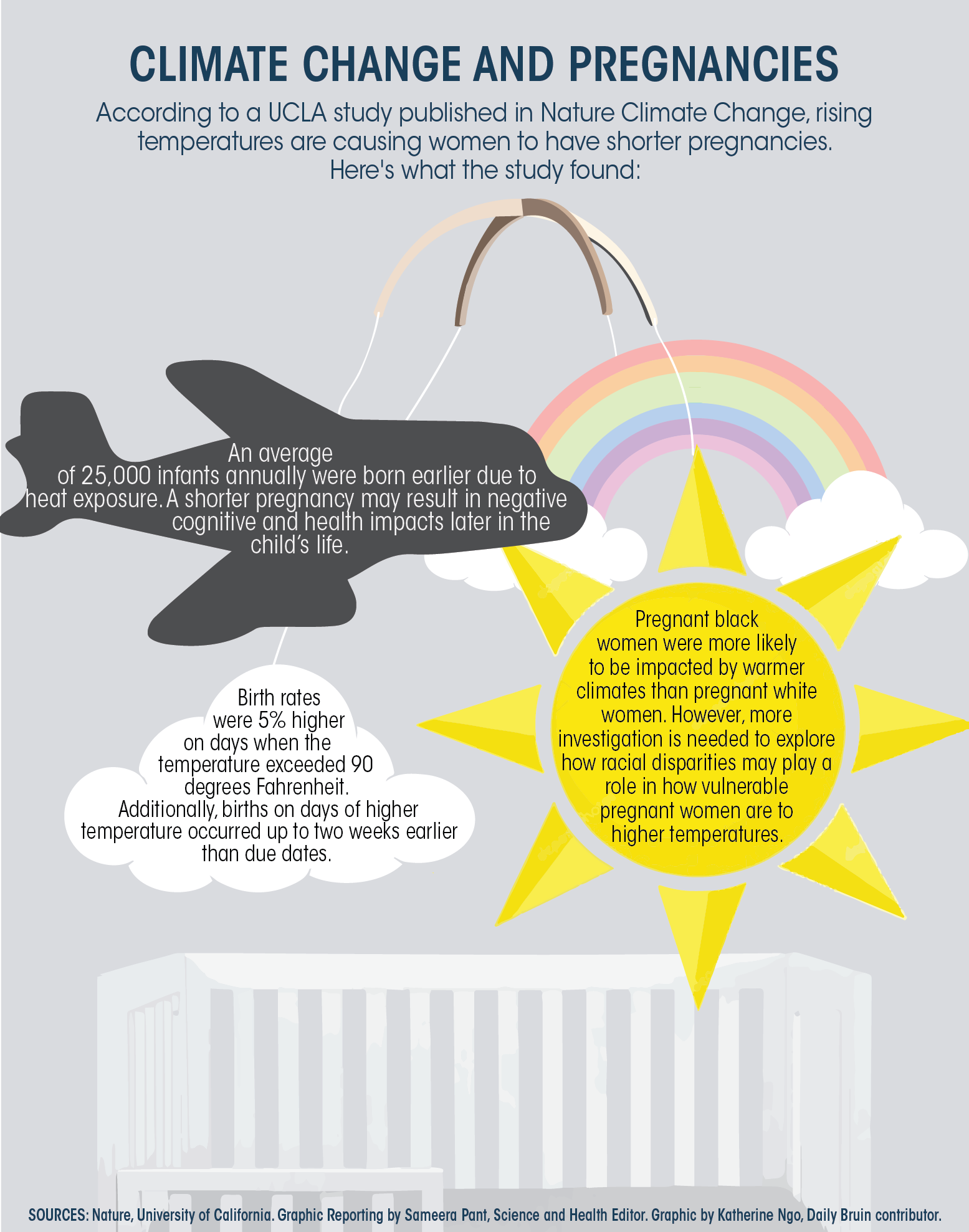 By Bernard Mendez and Shruti Iyer

Climate change may cause childbirth to occur up to two weeks earlier than expected, according to a UCLA-led study.

Researchers analyzed birth and weather records from 1969 to 1988 in counties across the United States. The study, published in Nature Climate Change in December 2019, found that high temperatures cause a spike in birth rates.

According to the study, a single day with a maximum temperature greater than 90 degrees Fahrenheit causes infants to be born on average 6.1 days early.

However, in hot counties, hot days don’t affect childbirth as drastically as cooler counties, said Jessamyn Schaller, a study co-author and an economics professor at Claremont McKenna College. This may be due to biological adaptation or the increased use of air conditioning, she added.

The researchers found that from 1969 to 1988, an average of 25,000 births per year came before expected because of heat exposure. It is estimated that by the end of the century, the figure will rise to 42,000 births per year, the study stated.

Alan Barreca, first author of the study and an associate professor at the Institute of the Environment and Sustainability, said he thinks early births affect a child’s physiological development.

Barreca also said that children who are born early often have worse respiratory health and an increased chance of mortality. He added that children born in extreme heat tend to have lower incomes in adulthood.

Dr. Leena Nathan, medical director for UCLA Community Obstetrics and Gynecology Practices, said babies that are born in a short pregnancy term can have long-term problems anytime throughout their livee. Some of these complications include problems with respiration and problems with learning, she said.

“A premature birth can affect everything from the intestines to the eyes (and) brain, so we really like to try to avoid preterm birth as much as possible,” she said.

Nathan said that in extreme heat women have more pregnancy issues and contractions because their blood vessels dilate in order to control increasing body temperature.

In order to combat this, she said, pregnant women must find the coolest place they can stay and stay well hydrated to have a healthy pregnancy.

The research paper states that a full-term pregnancy is about 40 weeks, but in practice anything between 37 and 40 weeks is considered a healthy term, Nathan said. Anything below 37 weeks is cause for concern and is classified as a premature birth, Nathan added.

The research has also caught the attention of lawmakers.

A group of U.S. senators, including Dianne Feinstein, Elizabeth Warren and Richard Blumenthal, addressed a letter to the Centers for Disease Control and Prevention describing the results and urging the organization to develop solutions to the health impacts caused by climate change.

“Given that climate change is already contributing to rising temperatures in our country and that babies born too early are more likely to suffer negative health outcomes including death, (the) CDC must confront climate change as a public health imperative to mitigate the lasting consequences it will have on future Americans to come,” the letter read.

However, the use of air conditioning is problematic, Barreca said. Air conditioning emits greenhouse gasses that contribute to global warming. Additionally, low-income groups often do not have air conditioners, he said.

“This is another case where climate change is actually an economic justice issue,” he said. “The people that are economically capable will be able to adapt, but other people won’t.”

Nathan said in her experience, black women have a higher rate of maternal morbidity and mortality and have a higher risk of preterm delivery. One reason is the lack of access to resources such as an air-conditioned room when it becomes very hot.

“The increasing temperature can actually increase the disparity and outcomes amongst these patients,” Nathan said.

Barreca said he is unsure why high temperatures and birth rate are related. He said he thinks it may be due to an increase in oxytocin, a hormone found in pregnant women, or insomnia incurred by the heat.

He also said he is currently researching ways to provide low-income households access to air conditioning.

“To me, this is where we’re at this level of economic development for purpose,” Barreca said. “Those of us that are capable need to be really helping the vulnerable children in our country, our neighbors around the world and even other countries that have less income.”