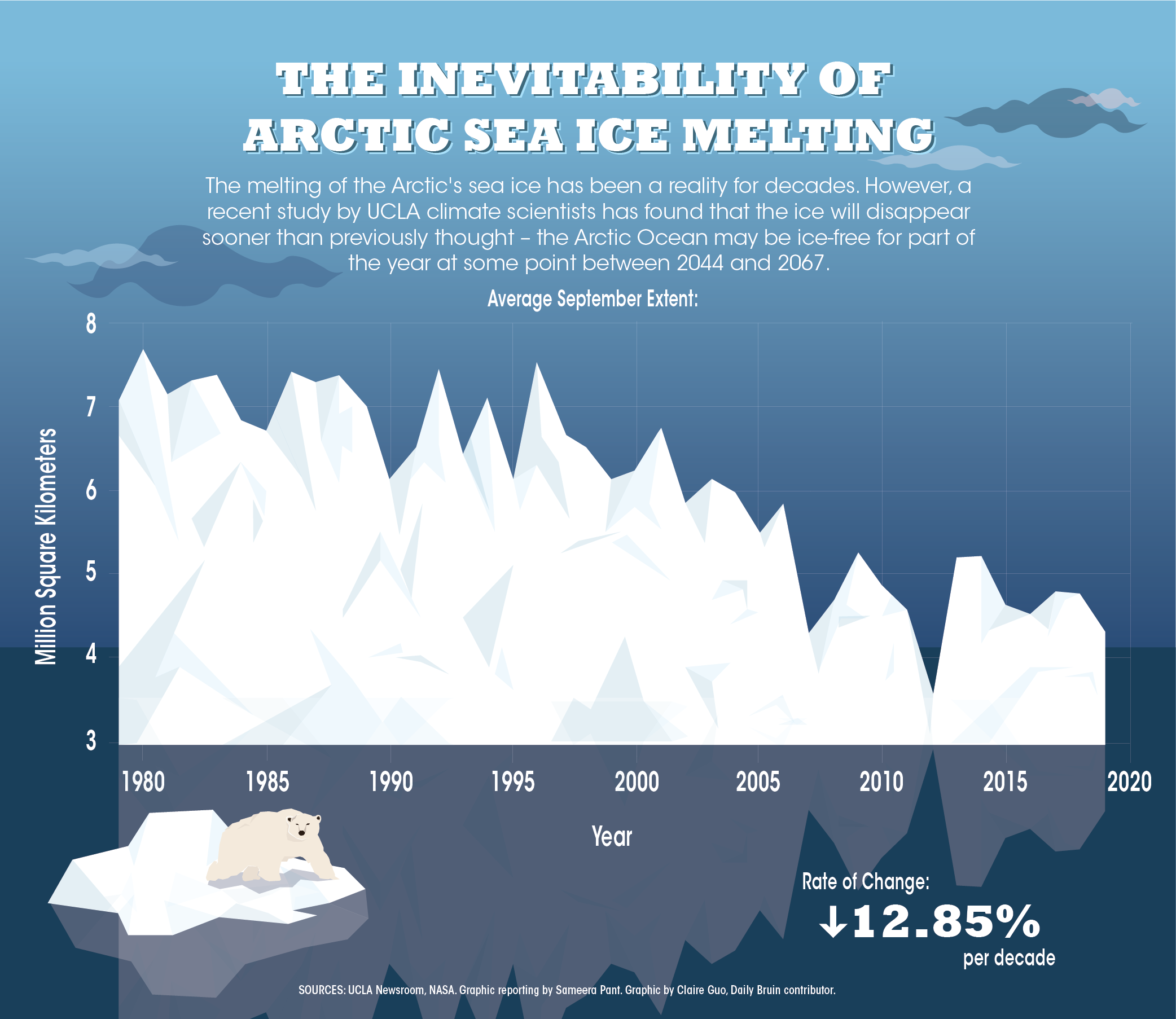 A: A recent UCLA study found that the Arctic Ocean could become nearly ice-free in 2044.

The study, which was published in November, concluded that the Arctic will become nearly ice-free anytime during the period from 2044 to 2067, particularly in the month of September.

Chad Thackeray, researcher at the Institute of the Environment and Sustainability at UCLA and first author of the study, said the Arctic is melting faster than other parts of the planet, warming at two to three times the global rate.

Based on field consensus, the Arctic will be considered nearly ice-free when there is less than 1 million kilometers of ice, Thackeray said.

He added there is great disagreement on when the Arctic will become ice-free among the existing climate models, and the primary goal of their research was to reduce that disagreement.

The study evaluated the reliability of existing models that predict when the Arctic Ocean will become nearly ice-free, based on greenhouse-gas emissions.

“I know going in that our goal was to better understand why there is such a disagreement, which spreads from 2026 to 2132, and try to reduce it, so that we can better prepare for change in the future,” Thackeray said.

“Using different climate models, we found that sea ice melts in similar areas in response to the seasonal change each year and in response to climate change,” Thackeray said. “The similarity between these two different time frames allows us to predict future ice melt due to the climate with future sea ice albedo cycles.”

Thackeray said the researchers found that the sea ice albedo cycle behaves similarly in the Arctic each year, which allows them to predict future cycles with historical data.

“We ran simulations of the melting process of the past hundred years, and used this to run simulations that predict future ice melt due to climate change,” Thackeray said. “The group of models that are closest to the result is what we called the most reliable, and we found that the Arctic could become ice-free during September in 2044.”

“The melted ice will (allow for the use of) the Arctic Ocean for transportation, which will potentially have a negative impact on marine life in the region,” Raphael said. “I don’t see any positive implication (on) marine ecosystems.”

However, Raphael said the reduction of greenhouse-gas emissions can slow down the warming process.

“Reducing greenhouse gas emissions can slow things down. … We still have a chance now,” Raphael said.