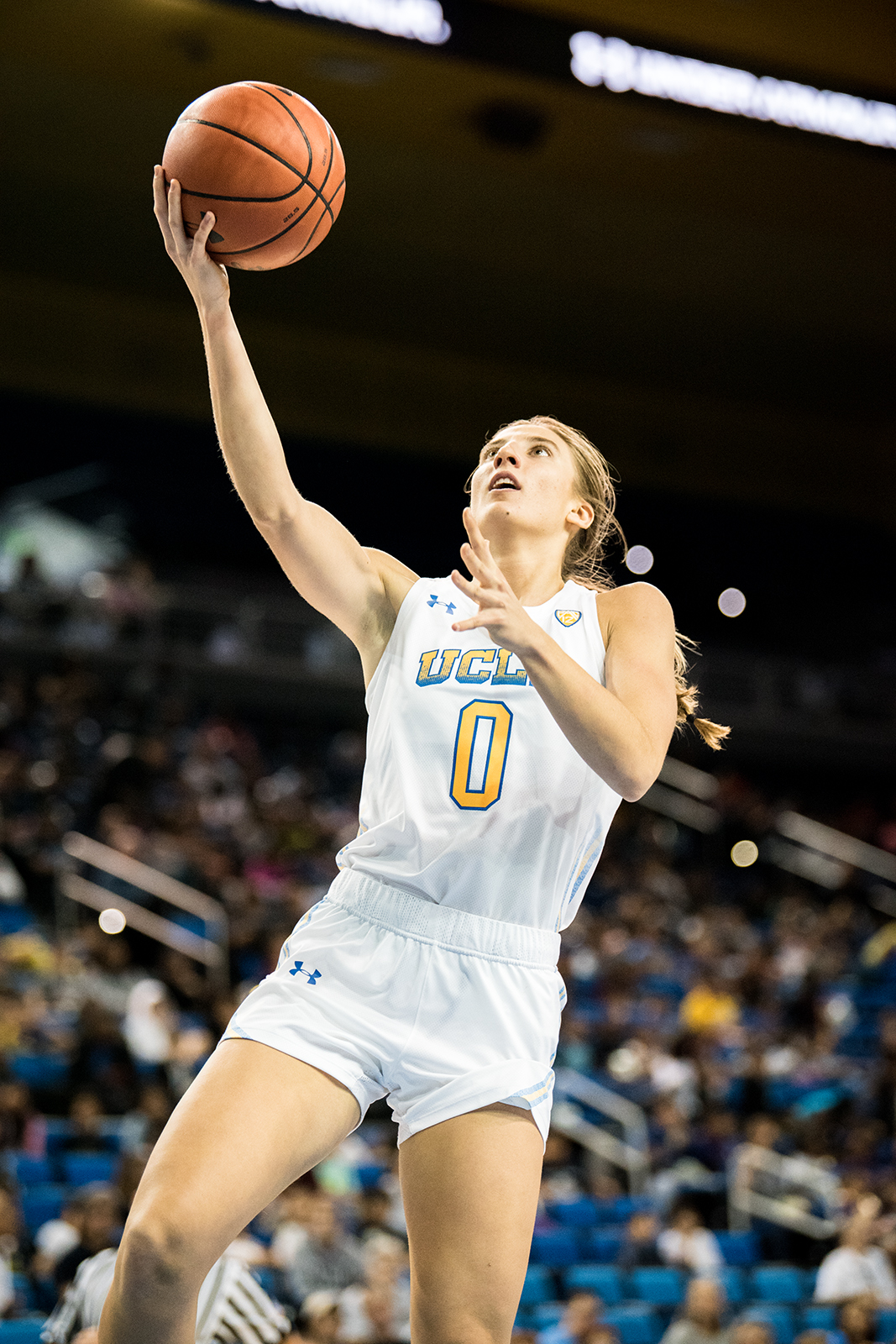 Junior guard Chantel Horvat posted her first career double-double in No. 8 UCLA women’s basketball’s win over No. 18 Arizona on Sunday. Horvat is one of a few Bruins who have come off the bench to help UCLA. (Joy Hong/Daily Bruin senior staff)

For the Bruins, different players adopt different roles on different days – especially in the midst of the Pac-12 schedule.

No. 8 UCLA women’s basketball (14-0, 3-0 Pac-12) defeated Arizona on Sunday behind 22 bench points – a total matching the combined bench points in its previous two conference matchups against USC and Arizona State.

The leader in plus/minus in the victory over the No. 18 Wildcats – one of only three remaining undefeated teams in the Pac-12 at the time – was junior guard Chantel Horvat. Horvat posted her first career double-double Sunday and has returned from injury to provide UCLA with a 6-foot-1 post-up guard.

The efforts of the role players like Horvat did not go unnoticed by coach Cori Close after the game.

“(Horvat) was the difference in changing our toughness,” Close said. “She led the way in what that toughness needed to look like, and other people follow.”

Other players, like sophomore guard Kiara Jefferson, contributed off of the bench without necessarily stuffing the stat sheet.

Jefferson played seven minutes – which was tied for eighth on the team – and she did not score a point. But the Bruins outscored the Wildcats by five while she was on the floor, and coach Close said Jefferson allowed freshman guard Charisma Osborne time to rest in the first half.

Jefferson’s teammate in the backcourt off the bench, freshman guard Jaden Owens, chipped in seven points, matching her season-high set all the way back in her collegiate debut against Weber State.

“(Owens maintained) the level of confidence that she had to come in and give a really big punch for us in the first half when we were really struggling,” Close said. “(I’m) really proud of kids who had the selflessness and the discipline to stay ready and be ready when their opportunity came.”

Players who spend more time on the court have also contributed, but not always in the same fashion.

Against Arizona State, redshirt senior guard and Women’s Citizen Naismith Trophy Watch List member Japreece Dean said she had to shift role on defense and on the boards.

“I was more of a help defender this game, and I think I really struggled seeing the ball and seeing my man,” Dean said. “I’m the one that gave up those offensive rebounds to (Arizona State guard Kiara Russell).”

Dean also dealt with double teams against Arizona, but Close said Dean settled into that role by distributing the ball more.

“I never thought (Dean) really got it going the way she normally does, but she was poised emotionally,” Close said. “I think (Dean) just settled in and said, ‘Hey, I may have a different kind of role.’”

Additionally, redshirt junior guard Natalie Chou – who began the season as a starter but has since been replaced in the lineup – leads the team with 26 steals on the season.

Chou has also converted a 3-pointer in each of UCLA’s three Pac-12 games, as the Bruins have hit greater than 40% of their shots from distance in those contests.

Junior forward Michaela Onyenwere is the team’s leading scorer, but Close said she has shown a willingness to be selfless. Onyenwere scored nine points on 4-of-13 shooting against Arizona State – tied for her second-fewest points on the season – only to come back and lead UCLA with 18 points Sunday afternoon.

“Even though (Onyenwere) is our leading scorer, she’s the first one to say it’s not about her, it’s about us,” Close said.

UCLA will now head on the road, and will face Utah on Friday.