Bruins bring down Huskies in 1st conference game of season 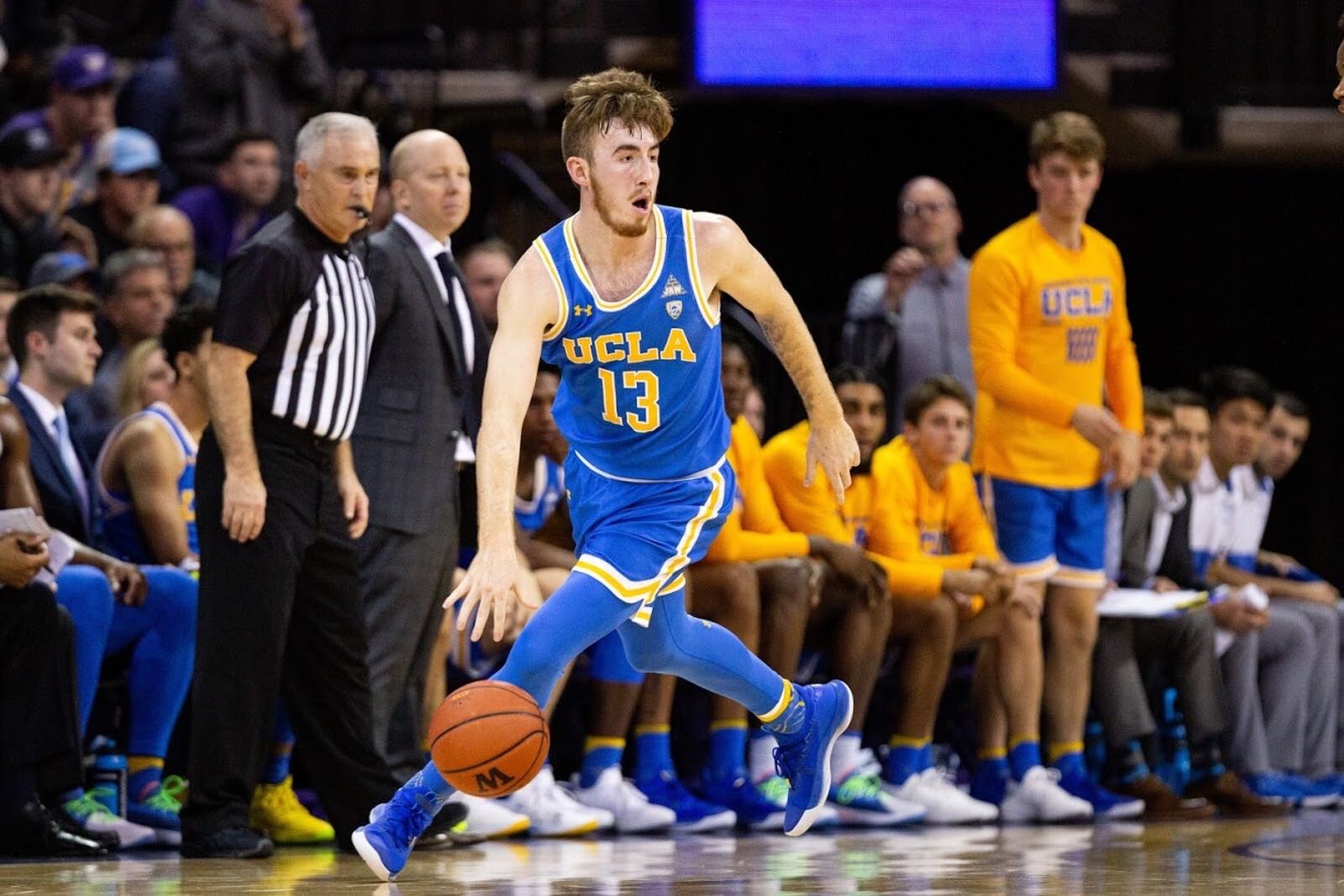 Freshman guard/forward Jake Kyman scored a career-high 21 points in UCLA men’s basketball’s victory over Washington on Thursday. Kyman scored all of his points off of 3-pointers, going 7-of-12 from deep on the night. (Courtesy of Lydia Ely/UW Daily)

Jake Kyman’s career night kept the Bruins alive, but it was his final attempt with eight seconds to go that saved the game.

Down by one with 24 seconds to play, the Bruins took the ball up the court and eventually swung the ball around to Kyman, who knocked down the wide open game-winner from the wing.

The freshman forward had 18 total points in nonconference play, shooting 30.8% from deep across his nine previous appearances. Kyman hit two triples in the first half, helping the Bruins enter the break with a 10-point lead, but it was his five second-half 3-pointers that helped stave off a Husky comeback.

Washington went on an 8-0 run to open the second half, but the loss of one of its key starters flipped the script down the stretch.

Forward Jaden McDaniels picked up four fouls in the first half, but Washington coach Mike Hopkins sent him back out on the court to start the second. Less than four minutes into the final frame, McDaniels was tagged with his fifth and final foul, and the Huskies had to play the final 16:10 without one of their five-star freshmen.

Washington’s other five-star freshman, forward Isaiah Stewart, picked up his fourth foul with 7:15 remaining, sending the Huskies’ leading scorer and rebounder to the bench with his team up 50-49. Stewart posted 24 points, 11 rebounds and five blocks on the night, leading Washington in all three categories.

The Bruins were unable to score in Stewart’s absence, however, as he reentered the game with just over five minutes to go and the Huskies up 51-49.

Then a Kyman triple gave UCLA a lead, and the final four minutes consisted of four lead changes and three ties.

Junior guard Chris Smith broke one of those ties with 1:18 remaining, sinking a floater in the lane for his 16th and 17th points of the night. The two teams traded free throws over the next few possessions, but a 3-pointer from guard Nahziah Carter gave Washington a 64-63 lead with 24 seconds to go.

After Kyman’s seventh and final 3-pointer put the Bruins back on top, the Huskies coughed it up on their final possession when Smith stripped the ball and dove on top of it to force a jump ball.

UCLA got the ball on the alternating possession, and one inbound was all it needed to secure the victory.

Smith and freshman guard/forward Jaime Jaquez Jr. helped UCLA to a 38-27 advantage on the boards, hauling in 12 and 11, respectively. The two wings’ performances as rebounders made up for the lost production of redshirt sophomore forwards Jalen Hill and Cody Riley, who combined for nine fouls on the night.

Hill and Riley averaged a combined 13.6 rebounds per game entering Thursday, but the duo posted just four against Washington.

UCLA’s win was the first Pac-12 victory for coach Mick Cronin, and his squad will now travel across the state to Pullman to take on Washington State on Saturday.