Editorial: UCLA must use its resources to amend cold treatment of students who are homeless 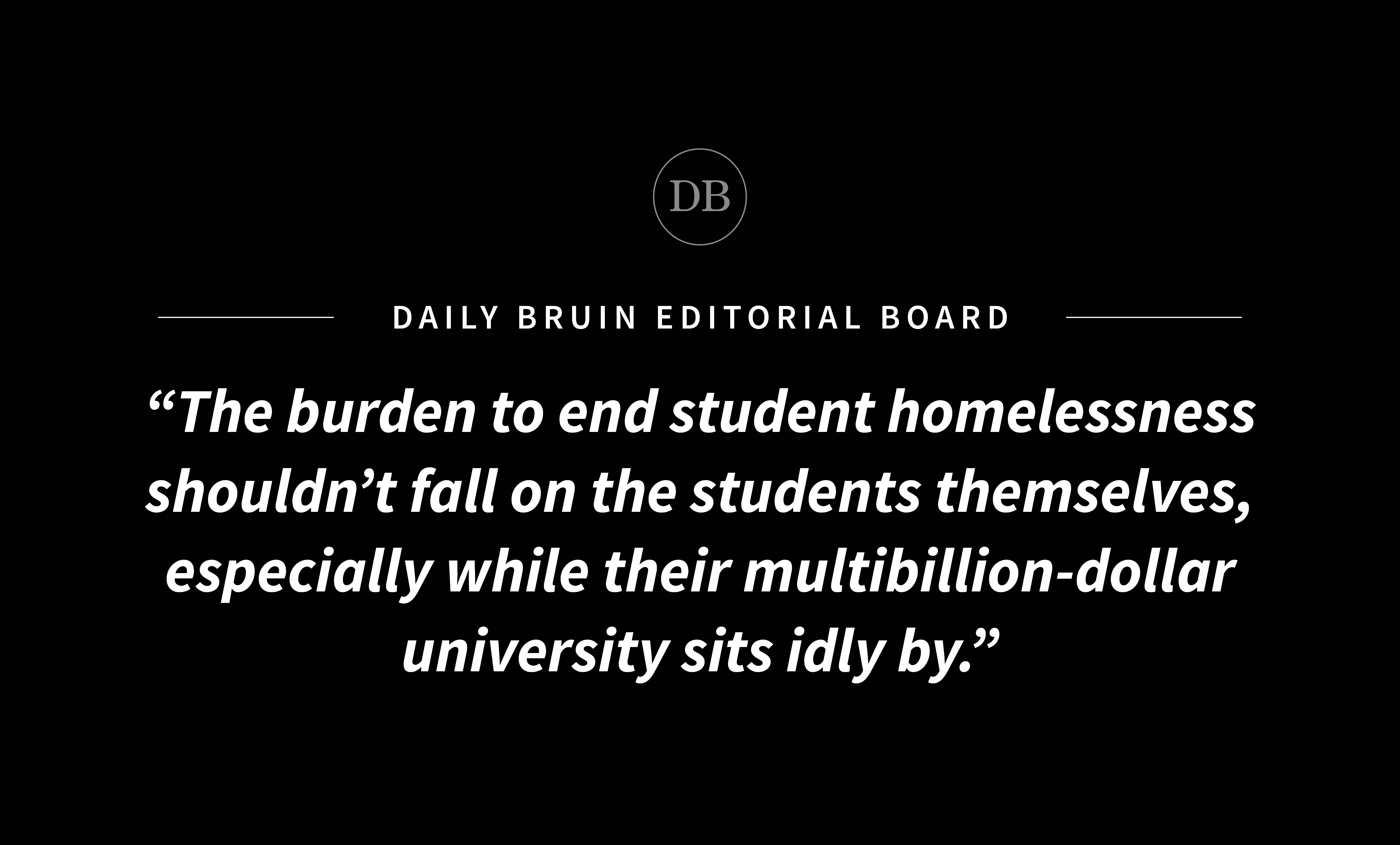 While UCLA wishes Bruins happy holidays, it seems perfectly content in leaving its students who are homeless out in the cold.

As winter temperatures continue to drop, concerns about UCLA’s student homelessness have only grown. Rise, a student-led nonprofit that advocates for student issues, has recently circulated a petition urging Chancellor Gene Block to invest at least $1 million in building an on-campus shelter for students experiencing homelessness.

And for a university that has raised over $4 billion in its Centennial Campaign, that seems like a small price to pay.

It’s old news by now that Westwood has the highest average rent prices in California. And with the Los Angeles City Council declaring a state of emergency over rising rates of homelessness, students are no strangers to the risk of housing insecurity.

The least UCLA could do to support Bruins experiencing homelessness is to read the demands listed in the petition – but that’s setting the bar on the floor. Hosting a campus shelter, creating safe parking lots and increasing emergency financial support are all steps UCLA must consider, especially given its ever-increasing pool of donations.

But even if UCLA decided to take initiative, it would find itself without much information to go off.

Five percent of students across the University of California experienced homelessness in a 2016 survey, which would amount to over 2,000 students at UCLA alone. Then again, there is no way to be sure of that number, considering UCLA fails to collect statistics on homelessness rates within its own student body.

UCLA’s unwillingness to even understand its proportion of students who are homeless points to a larger trend of failing to support those who need the most help.

The university has provided only silence in response to the Undergraduate Students Association Council and North Westwood Neighborhood Council’s resolutions for safe parking lots – an easy and cost-efficient way to transform available space into overnight housing for students. And while the school’s Economic Crisis Response Team offers some emergency loans and meal vouchers, the most it provides to students deemed financially in need is a whopping 14 days of temporary housing.

And when those with the power to make changes leave for the holidays, those two weeks of emergency housing won’t even be enough to last students who are homeless through winter break.

Sitting on billions of dollars while thousands of students are left without enough to pay rent is unacceptable. But this petition is an opportunity for UCLA to prove its critics wrong by sponsoring an on-campus shelter with available social, financial and emotional support systems.

But to hear it from UCLA, those programs already exist.

What they are referring to is Bruin Shelter, a student volunteer organization that operates in Santa Monica. The shelter is also an independent nonprofit distinct from UCLA itself, and while it received a one-time starting grant from the David Geffen School of Medicine at UCLA, it otherwise operates through its own fundraising efforts. Alone, Bruin Shelter can’t solve student homelessness at UCLA – especially with a waiting list of over 100 people for fewer than 30 available beds.

The burden to end student homelessness shouldn’t fall on the students themselves, especially while their multibillion-dollar university sits idly by.

Because while it’s starting to look like Christmas for some, students who are homeless are left with UCLA’s cold shoulder.