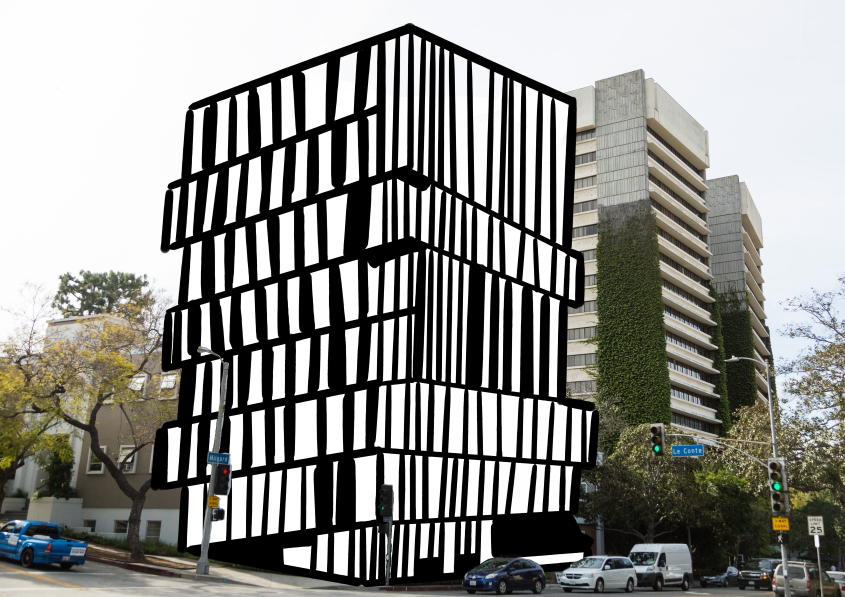 The Agora is a proposed 16-story building project at 900 Hilgard Ave. Developers pitched the building as student-centric affordable housing, however local critics have called it a trojan horse for luxury housing in violation of zoning technicalities. (Daily Bruin file photo)

The future of a proposed housing project on Hilgard Avenue is uncertain following the sale of an adjacent property by the project developers.

The Agora, a 16-story housing development project proposed in November 2018, aimed to provide affordable housing in a student-centric environment. Since then, some community groups have criticized the project for promising affordable housing, failing to take into account zoning technicalities and potentially devaluing the property of nearby homeowners.

Developers for the Agora sold a home adjacent to the property in October, according to a property grant. The developers offered to buy three homes near the project as a courtesy so residents would not have to live near the construction site, Aaron Green, a representative for the developers previously said.

In emails obtained by the Daily Bruin, co-principal developer Theodore Khalili informed the new homeowner Yoko Allen that he and his partner are not proceeding with the 16-story building project.

“We have since decided not to proceed with the 16-floor high-rise,” wrote Khalili. “We would not have sold this property if we had decided to proceed.”

In previous presentations to various community and campus councils by Khalili and co-principal developer Eraj Basseri, they claimed the project would cater to students and have 462 beds at $1,000 to $1,200 a month per bed.

Community members from the Westwood Neighborhood Council and the Holmby Westwood Property Owners Association have resisted the Agora because of concerns that it will cause traffic congestion, replace existing affordable housing options and disrupt the community environment.

Green declined to comment and the developers could not be reached for this story.

Esther Magna, a homeowner in the Little Holmby neighborhood, said she opposes the Agora project as it was initially proposed because it was too tall for local zoning regulations and she thinks it will devalue nearby property values.

Magna, who is also the leader of the opposition group Save Hilgard Avenue, said her organization is not against students or affordable housing. She added it is against this project because she thinks the promise of affordable student housing is a “Trojan horse” for luxury housing.

“We support specifically building student housing that is credible, not just empty promises, and that is as high of a building height as the city’s density bonus program allows,” Magna said.

Magna said her organization has confirmed with a new tenant at the site of the proposed project that the developers assured them that there will not be any construction at that site for at least three years.

The case for the Agora is still active, although the developers have indicated that they are considering a redesign of the project, according to an email between Magna and Mindy Nguyen, a Los Angeles city planner.

The North Westwood Neighborhood Council did not offer full support to the project but the Land Use Committee did show preliminary enthusiasm for the project in December 2018.

Michael Skiles, president of the NWWNC, said his council generally supports the construction of large volume, affordable housing projects for students. For the past two years, Westwood has been rated as the most expensive place to rent in California, he added.

Skiles, who was also the former president of the GSA when it declared its support, said the NWWNC understands the developers are evaluating some sort of redesign in response to community pushback. He added he hopes some sort of affordable student housing will be built eventually.

“We don’t know what that new project would look like, but … at the end of it, we just hope that there are more beds,” Skiles said. “I would consider it a tragedy that hundreds of students would lose beds to protect the views of multi-million homeowners.”

Skiles said he thinks this setback for the project means students will have fewer options in the near future. More significantly, he added that this kind of community pushback might dissuade other developers from pursuing ambitious housing projects in Westwood.

“It could potentially be a much bigger setback if all developers see that if they try to build an ambitious project that is tall and dense, they will encounter significant opposition from homeowners and that would eliminate a lot of potential avenues that developers outside of the Agora might explore in student housing,” Skiles said.