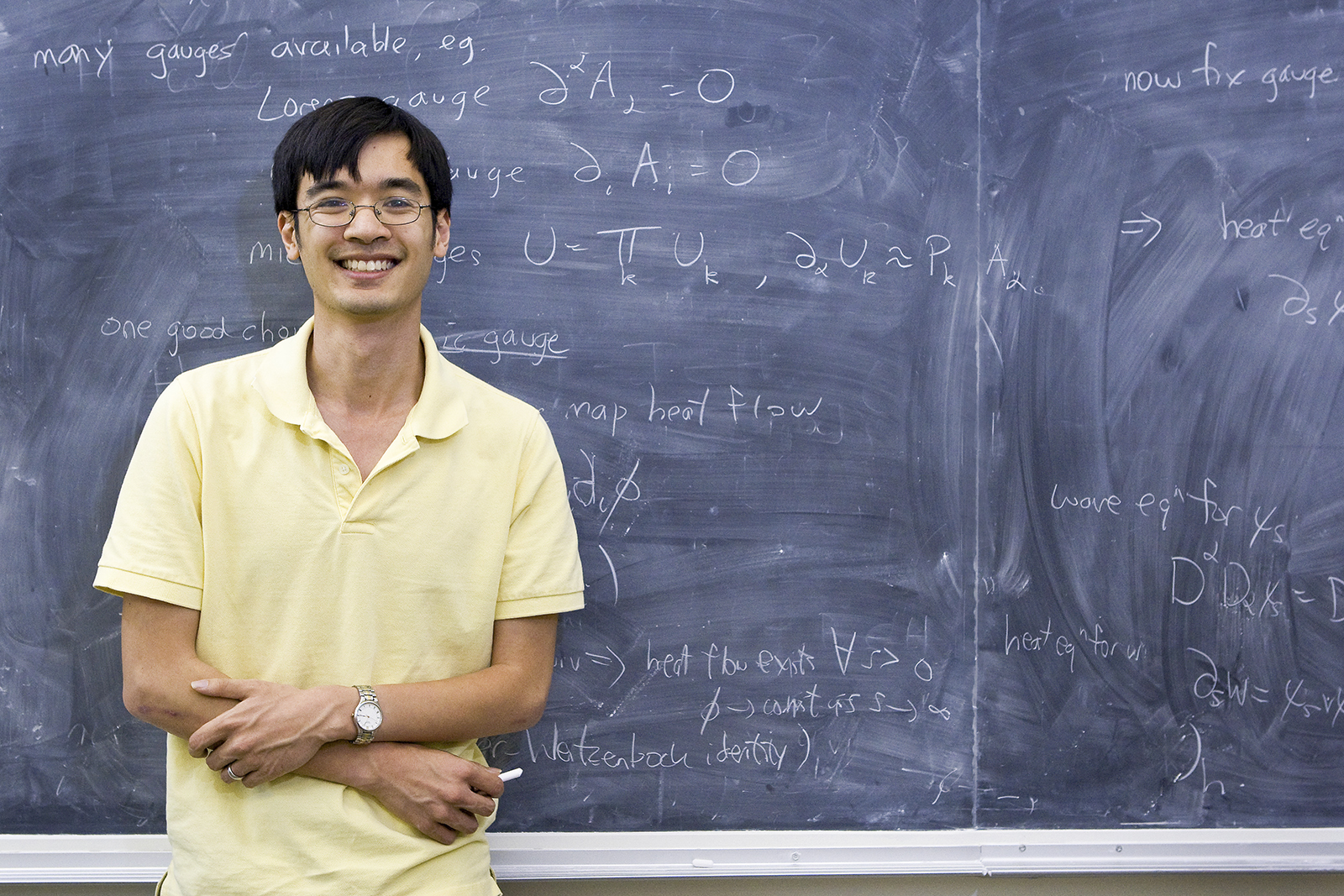 UCLA mathematician and professor Terence Tao, alongside three physicists, discovered an equation that simplifies the calculation of a mathematical statistic called an eigenvector. (Courtesy of Reed Hutchinson/UCLA)

The team discovered an equation that simplifies the previously long calculation of a mathematical statistic called an eigenvector.

The three physicists, Peter Denton, Stephen Parke and Xining Zhang, were working on a problem that involved neutrino scattering behavior. Neutrinos are fundamental subatomic particles that exist in three types: electron, muon and tau. They are, in many ways, the least understood fundamental particles, said Denton, a physicist at Brookhaven National Laboratory.

The paper is currently under review by Communications in Mathematical Physics, a peer-reviewed academic journal.

Eigenvectors are columns of numbers, and eigenvalues, scalars that are multiplied with the eigenvector, said Tao, who has published several papers about eigenvectors. Matrices are arrays of numbers arranged in a square or a rectangle.

Both statistics are important and appear frequently in physics and other scientific fields, Tao said.

“They are like the secret cheat code of a matrix,” Tao said. “If you know these, you can compute lots of other things like … whether the system is stable and how fast the system will grow.”

Tao and the other researchers discovered an easier method to calculate eigenvectors using eigenvalues.

Finding eigenvalues was already possible because of the use of a matrix associated with neutrino scattering, known as the neutrino oscillation Hamiltonian. This matrix tells scientists how neutrinos of one type may spontaneously switch to another type, Denton said.

A formula to convert from eigenvalues to eigenvectors already exists, but it is not easy to compute, Tao said.

However, the physicists were able to discover through multiple calculations that there was an equation that could easily accomplish this conversion if one knew the eigenvalues of one matrix and those of another related matrix, called a minor matrix.

A minor matrix of a matrix is essentially the original matrix without some rows and columns, Tao said.

“If you have a big matrix, like a 10-by-10 matrix, if you remove one row and one column, you get a nine-by-nine matrix,” Tao said. “That’s called a minor matrix of the original.”

Denton said they were trying to figure out clever ways to write equations to find eigenvectors in a way that was simple to them when they were studying the neutrinos.

Since there are three types of neutrinos, the three physicists originally tested the equation with three-by-three matrices using a computer, but they found it difficult to prove the equation true for all matrices.

The equation was then brought to Tao’s attention, who was able to prove it was true for all matrices.

Upon further study, the team found that the identity between eigenvectors and eigenvalues was in fact already discussed, but there were no concrete papers published about it.

“This identity was usually not presented as an interesting result in itself but to serve as a tool and like a stepping stone to do something else,” Tao said. “This one has no Wikipedia entry.”

Piet Van Mieghem, a professor at the Delft University of Technology in the Netherlands, was one of the scientists who had previously discovered the identity between 2011 and 2012.

He was surprised that the identity seemed to be unknown, a sentiment shared by Tao.

“When they first approached me with this email that says, you know, here’s an identity that we found, this is true, my first thought is, ‘This can’t be true,’ because if it was, I would have seen it,” Tao said.

Tao was not sure why this equation was relatively unknown, given its simplicity.

“There’s some strange sociology-of-science effect here. … It’s like how sometimes somebody goes viral on YouTube and many don’t, and it’s not quite clear why this happened,” Tao said. “You know like, why did Gangnam Style get a billion views? I mean, it’s catchy but not the world’s best song.”

“For this identity, it’s just that there wasn’t a critical mass of people who used it often enough that it became known,” Tao said.

“I would say, you know, this has been known in the past and clearly forgotten in the past,” Denton said. “So I don’t know if that means that there are more things to find, or maybe there’s not a lot to go in this direction.”

Van Mieghem said historically any exact formula will sooner or later have influence, adding he believes the new equation will have an influence in the fields of network science, data science and artificial intelligence.

Tao said he hopes the identity will be useful in an area of mathematics called random matrix theory, a field that deals with matrices that show up randomly in nature.