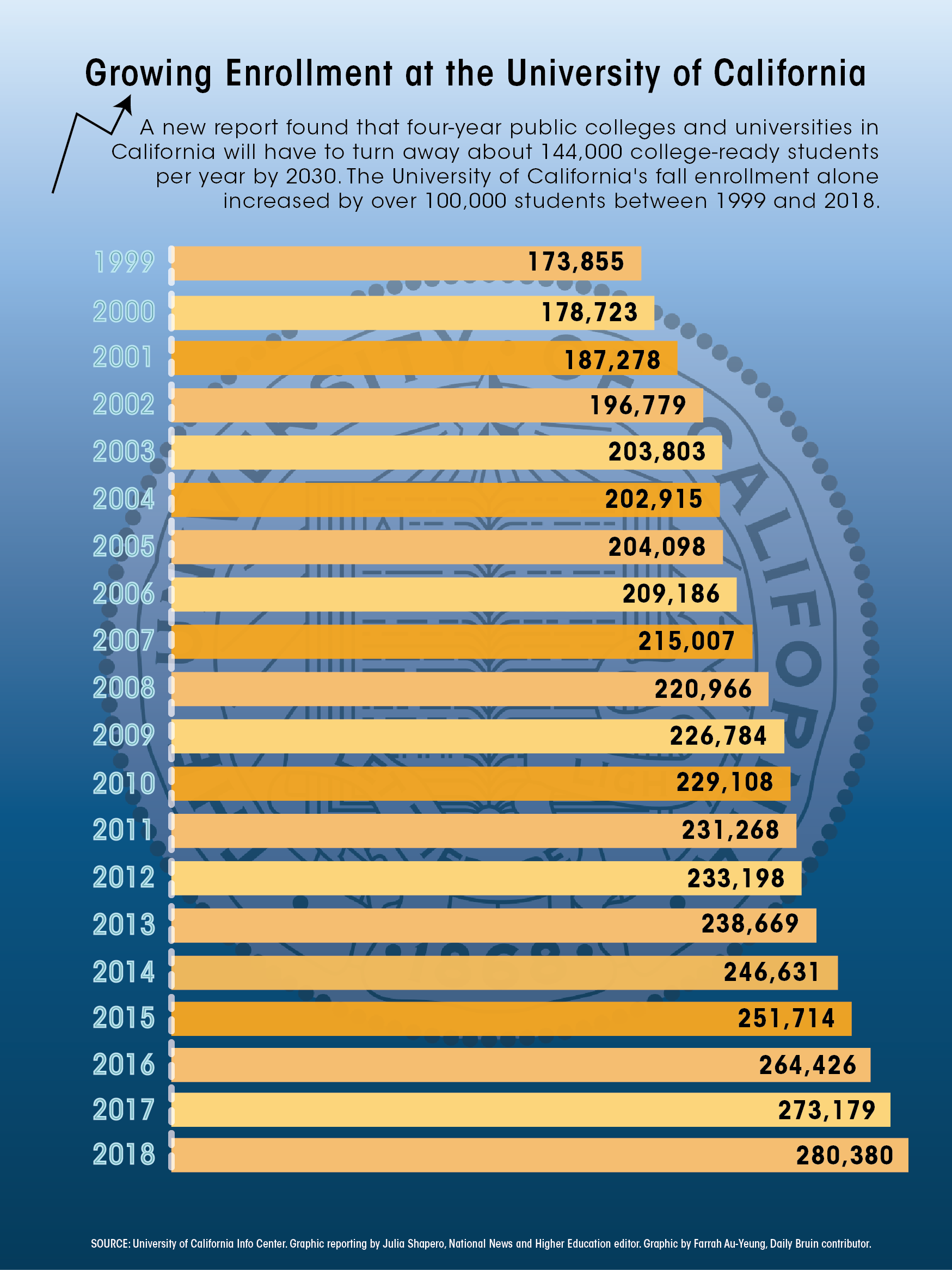 California four-year colleges and universities will be forced to turn away over 100,000 college-ready students each year by 2030 because of capacity limits, according to a recent study.

The study, which was published in October, found that the University of California and California State University are projected to have an increasing pool of qualified applicants but lack sufficient space in their campuses to accept them.

The report by College Futures Foundation, an organization that examines problems within higher education, found that by 2030, about 140,000 eligible students a year may be turned away simply because there is not enough capacity.

Regions with the largest proportion of low-income families and communities of color, including the Central Valley, Inland Empire and Los Angeles, will be particularly affected by the lack of space, according to the study.

The study also found that graduate degree programs will be lacking around 21,000 spots per year by 2030.

Monica Lozano, CEO of the College Futures Foundation, said the issue is a capacity crisis and needs to be addressed quickly.

“Eligible students get turned away because they are unable to find a place in the UC or CSU system,” Lozano said. “The consequences of this are extremely serious when thinking of long-term workforce needs in the state. More jobs now require postsecondary degrees.”

Capacity challenges heavily impact students residing in the LA area, where there is a high proportion of students from low socioeconomic backgrounds and communities of color, according to the report. It also found that this demographic is most likely to be squeezed out of higher education if capacity concerns are not resolved.

The report also found that LA area universities will not have room for 16% of the region’s 101,000 students expected to qualify for admission by 2030.

The report added that cities such as LA, where a degree in higher education would offer the greatest opportunities for social and economic mobility, are cities where universities lack space for students the most.

Tyrone Howard, an education professor, said UCLA has not yet had a serious problem of overcrowded classrooms, but added he thinks the concerns are valid.

“This is a simple case of supply and demand,” Howard said. “There is just more demand than there is supply. I would hate to see well-qualified students not being admitted in because of a lack of space.”

Howard added that there are potential consequences if the university is accepting more students than it can handle.

Community college alone may not be the optimal solution for dealing with the excess of viable college applicants. The report found that students are more likely to earn a bachelor’s degree if they directly attend a four-year college rather than if they start at a community college.

Lozano said in order to make more room for students, universities should make sure students are enrolling in the classes they need and gaining access to academic support. She said this will allow students to graduate on time and ensure space will be available for incoming students.

She added that universities should also find creative ways to use facilities to solve the problem of the lack of physical space. Universities could also extend the time period when classes are offered or use facilities off campus, Lozano said.

Universities could tap into facilities in the local area, such as nearby community colleges, and look into establishing a sharing agreement with local colleges to increase the number of classes that will transfer over as UC credits toward graduation.

UC spokesperson Sarah McBride said the UC is focusing on a long-range plan to ensure access to affordable, high-quality education for all eligible students.

“Our efforts include improving graduation rates and on-time graduation,” McBride said. “UC is working to significantly increase on-time student graduation rates, as it is one of the best strategies to reduce the cost of education for students and families. Timely graduation also frees up capacity for UC campuses to accommodate additional students.”

Lozano said she thinks the UC should focus on solutions urgently yet creatively.

“Solutions should be focusing on students themselves, such as improving the student experience and getting the classes they need,” she said. “We need to also look at how to streamline the process so that students are moving in a timely fashion.”

Howard said he thinks higher education is important for the state, and universities must be held accountable to grant access to well-qualified students.

“Hardworking students should be able to attend high-quality universities to get their education. We can all benefit from an educated populace,” Howard said. 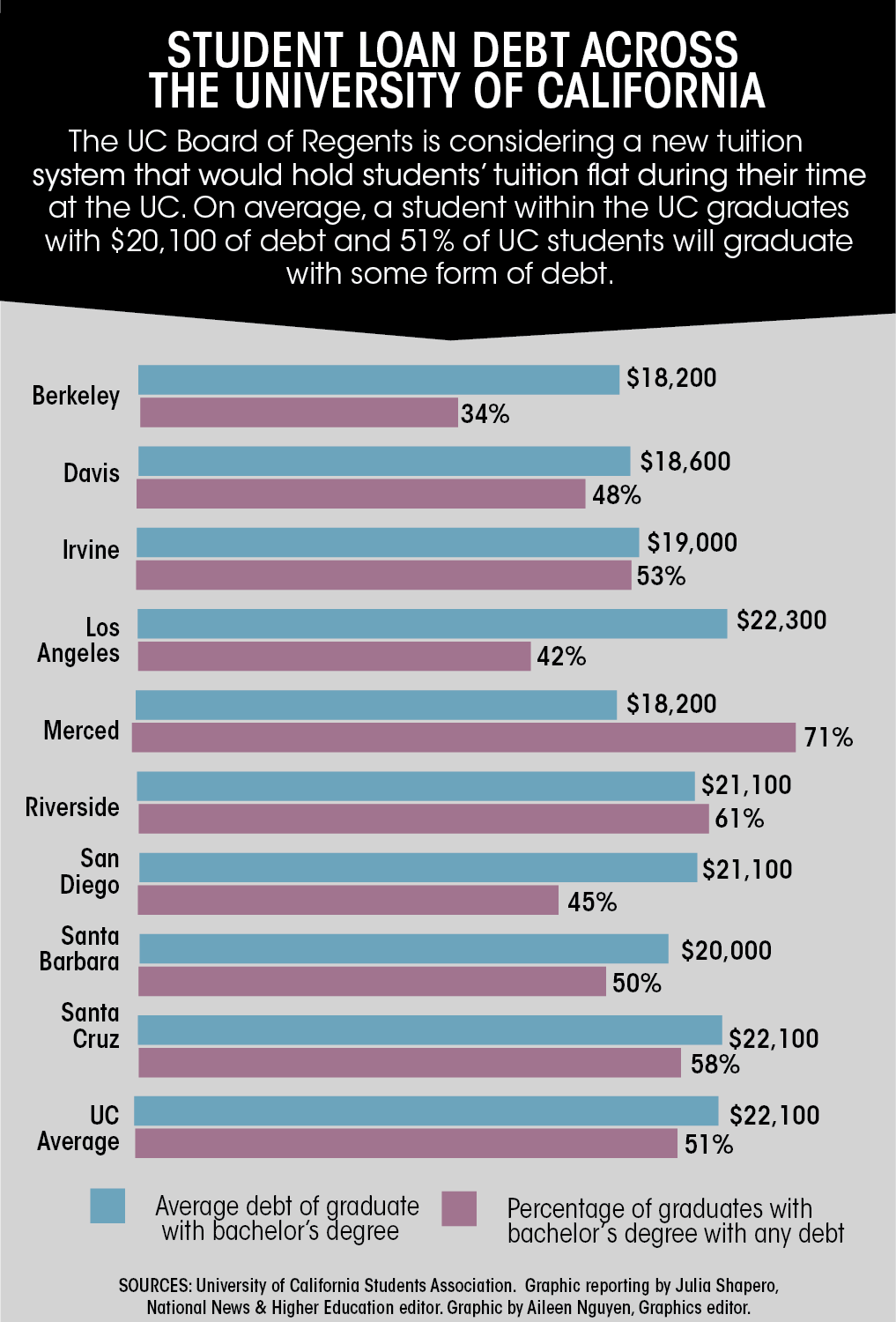