The Quad: How game shows like ‘The Price is Right’ live on in the streaming era 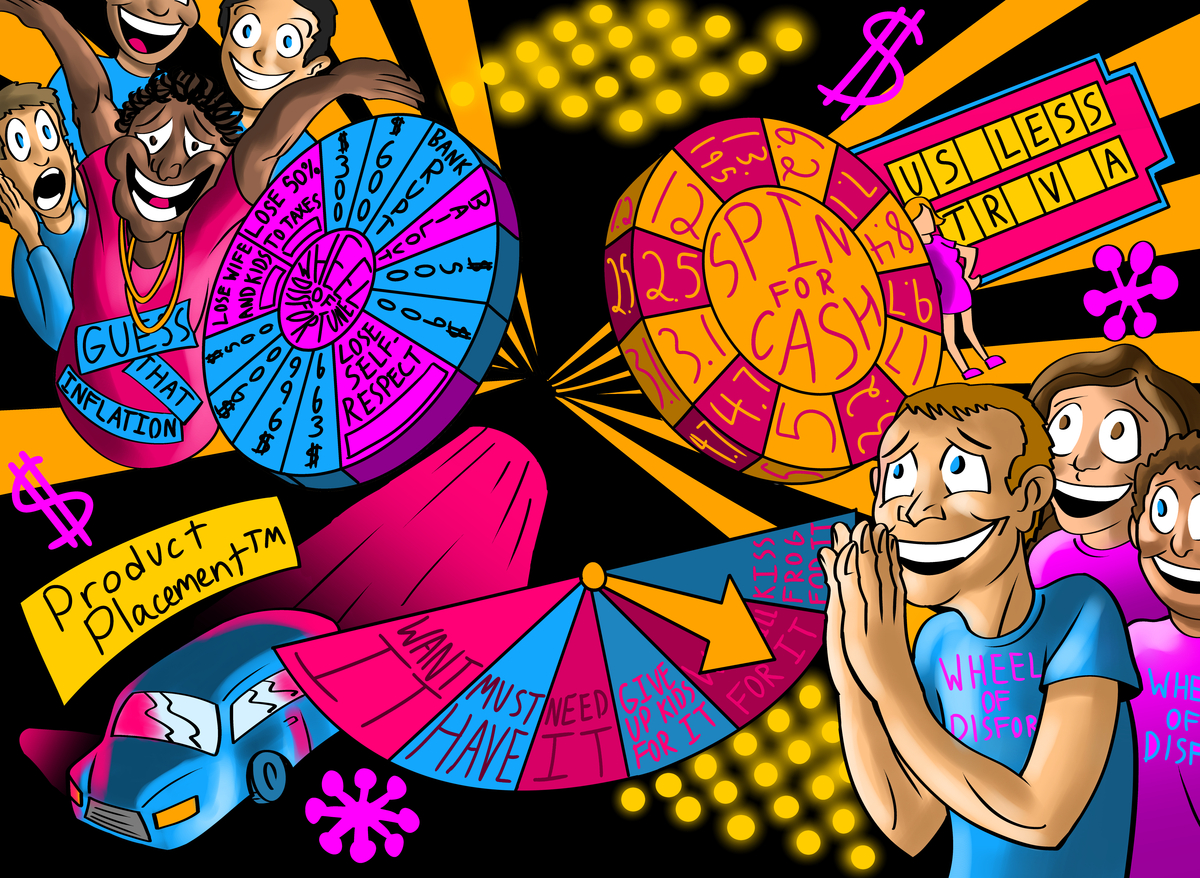 By Audrey Pham and Kanishka Mehra

The lights were blindingly neon, and all we could hear was the tick-tick-tick of the wheel spinning.

Before we sat down, people we had never seen before were surrounding us and telling us what to do. This all happened immediately, and there was no time to think or register what was taking place. We had no choice but to sit there, taking it all in.

It may sound like a nightmare, but we actually signed up to be there. With our phones confiscated and names taken, we entered the live taping of “The Price is Right.”

Despite living in Los Angeles and being just 15 minutes from the CBS studio where “The Price is Right” is filmed, the world of live television and studio audiences remained uncharted territory for us.

The two of us were left with intangible feelings of confusion as we stumbled out of the live television taping. What exactly happens in live TV tapings? Where do these tapings go down? And where do game shows come from?

As it turns out, the origins of live television and studio audiences date back to the early 1900s, when radio was the most popular form of media consumption.

These pioneer game shows – then referred to as “quiz shows” – generally included puzzles, spelling bees and contests. The vast majority of early radio shows such as “The Jack Benny Program,” which premiered in 1950, were recorded in the presence of studio audiences.

In the 1920s, some radio shows began incorporating a question-and-answer format into their programs. It wasn’t until NBC’s show “Vox Pop,” which premiered in 1932, that audience participation became a mainstay in American networks.

The newfound popularity of game shows could have been due to the interactivity of studio audiences. Actors have performed in front of audiences since the beginning of time, and studio audiences provided actors on television with a similar feeling of community. For those watching or listening to game shows from home, such interaction provided a feeling of genuine connection with the contestants.

Why exactly were these interactive shows so popular among the American people? Journalist Maurice Zolotow attributed this success to its exhibiting slices of life and presenting a wide range of people and personalities.

The concept of a live studio audience actually had its start in scripted television with the sitcom “I Love Lucy” in 1951, blurring the lines between at-home watchers and listeners and on-stage performers and participants. Game shows such as “Jeopardy!” and “The Price is Right” premiered around this time and took this to the next level, all relying heavily on the interactive relationship between the audience and contestants.

Fast forward to 2019, audience participation still remains integral to game shows. On “The Price is Right,” opportunities to “come on down” are open to all – so long as you are willing to reserve a ticket, show up to the CBS studio in Los Angeles, wait in line and cheer your head off in hopes of being picked to go onstage.

Game shows have been able to keep viewers hooked, despite changing times. Why do viewers continue to sit in front of the TV, especially when Netflix is just a few clicks away?

Often, game shows consist of a charismatic host on a vibrant set and participants competing for a prize – don’t forget a dreamlike level of cheerfulness radiating from the studio audience. When we attended “The Price is Right,” we were encouraged to stand up and cheer along when prompted by a designated cheerleader on stage.

According to research on game shows, the genre’s success also comes down to money and product placement. In their 2006 article “Come On Down” in the Journal of Advertising, Stephen J. Gould and Pola B. Gupta call the game show platform a legendary pop culture phenomenon that softens the boundary between entertainment and promotion better than other mediums.

Game shows such as “The Price Is Right” lure viewers in with candy-colored sets and a cheery atmosphere, and these audiences become a valuable pool of potential buyers for products advertised on the show and the commercials.

The hour-long episode consists not only of games where audience members guess the retail price of various products, but also commercial breaks that generate revenue for the network. For this reason, every moment recorded on tape must be flawless to ensure each product is displayed ideally, and this usually takes multiple tapings. A week’s worth of episodes are often filmed in one day to maximize time on set.

Despite these monetary motives, game shows are actually perceived as more realistic by viewers in comparison to scripted fictional television shows. According to Gould and Gupta, this creates a paradox where viewers believe in the authenticity of game shows while producers have the power to doctor every moment to showcase products and increase viewership.

Psychologists suggest that those who watch from home may find it more difficult to gauge inauthenticity through a TV screen, and viewers in the studio audience are too mesmerized to consider credibility.

That explains why thousands of viewers flock to be a part of a studio audience annually, and many others apply to be contestants with a dream of winning.

If you’re planning on participating in a studio audience in Los Angeles, you might as well take the whole day off. We arrived at 9 a.m., and after an hour of waiting in line and filling out forms, we were taken in for a brief group interview with the show’s host. We waited for another hour to go on set. Some superfans dressed in gaudy outfits inspired by the show to increase their chances of standing out in the interview and being picked to go on stage.

Depending on the show, the vetting process to make it on stage can be as simple as showing up and being active participants in the studio audience, such as for “The Price is Right.” It could also be prolonged over the course of months of intensive interviews, such as for “Jeopardy!” Similarly, In 2018, over a million people applied to be on “Wheel of Fortune,” but only 600 were selected to continue to the next step of the vetting process.

If you’re lucky enough to be chosen, you won’t mind the bright lights, plastered smiles and shattered dreams. Game shows might be ingenuine, but in the words of “The Price is Right” host Drew Carey: “Welcome to Hollywood – everything’s fake.”