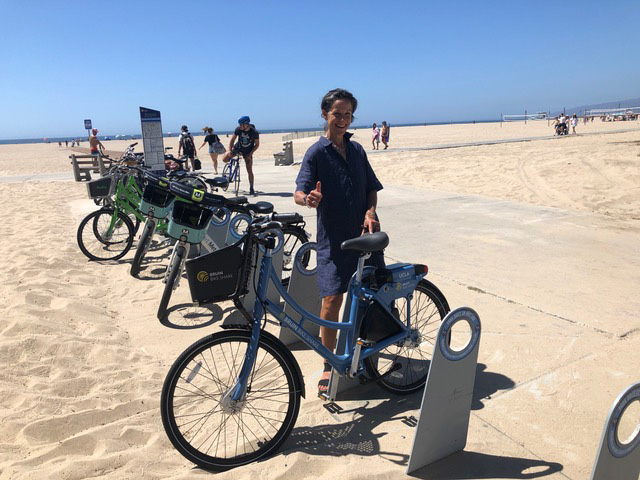 Wendelin Slusser, the associate vice provost for the Semel Healthy Campus Initiative Center and a UCLA professor of medicine and public health, hosts a podcast which aims to help listeners to live healthier lives. (Courtesy of Wendelin Slusser)

The World Health Organization defined “health” as a state of complete physical, mental and social well-being in 1948.

Wendelin Slusser, the associate vice provost for the Semel Healthy Campus Initiative Center and an adjunct professor of medicine and public health, said her LiveWell podcast could make a difference in promoting WHO’s definition of health rather than the common notion that health is merely the absence of disease.

Launched in May of this year by the Semel Healthy Campus Initiative Center, the LiveWell podcast features Slusser and her conversations with professionals in different fields that relate to health on topics ranging from music to insecurity.

Slusser wanted to highlight different notions of being healthy that people might not always associate with well-being, like how acting can encourage social empathy as a facet of social health.

She was inspired to launch the podcast to bring a wider audience in touch with the research of students and her colleagues.

“I was coming across all these faculty who might write about one topic that they’re so knowledgeable about, or students whose work is so inspiring and diverse,” she said. “It’d just be incredible to share or broadcast what these people, with such profound knowledge, but also such a commitment for health equity and diversity … are known for.”

In the two episodes released so far, the podcast – available on the podcast’s website, Spotify, Stitcher and SoundCloud – discussed music’s connection to neuroscience and the connection between stress eating and weight stigma.

In its first episode, Slusser talked to Robert Bilder, a professor of psychiatry and psychology, about the origins of music and how music can stimulate the brain. In the second episode, Slusser spoke to psychology professor Janet Tomiyama about emotional behaviors related to food habits.

While the episodes incorporate things like acting, music and food, they also delve into the scientific, technical aspects of health for the different topics, Slusser said.

In the episode about neuroscience and music, Bilder discussed the brain’s limbic system, which is known as the organ’s reward center, Slusser said.

Humans aim to stimulate feedback loops in the limbic system – such as food, flight, fight and reproduction – and can sometimes turn to forms of addiction like drug use and gambling to satisfy that region, Slusser said. Bilder also explained how music can light up the reward system of the brain as well, nourishing the limbic system, Slusser said.

Music is something listeners universally relate to; most people form personal, nostalgic connections with music and might be secondarily interested in how it affects the brain, Bilder said.

“Almost everyone can relate to music in some way or another,” Bilder said. “We want people to be engaged, anything that’s too science-y and over people’s heads … it’s just not helping anybody.”

In the episode about stress eating, Slusser said Tomiyama discussed how stress eating is different than other types of emotional eating, like comfort eating; the former is triggered by a stressful event rather than any other emotions. She pointed out that people often condemn stress eating, but the habit is also something that can help people get through a stressful period.

The next episode will be a conversation between Slusser and Jonathan Fielding, a professor, former public health director for the County of the Los Angeles and the namesake for Jonathan and Karin Fielding School of Public Health. Slusser said Fielding discussed finding a passion in a career path and his life story during the podcast interview.

Future episodes will include discussions with staff and students about climate health, inclusivity of individuals who are disabled and food insecurity, Slusser added.

Slusser’s selection process includes looking for stories and research she finds intriguing that represent different angles of health typically not spoken about, said Meagan Wang, an urban and regional planning graduate student who works on the podcast.

“It’s all about health and well-being, but that’s interpreted really broadly, so it doesn’t have to be people directly in the health profession,” Wang said. “When (Slusser) picks out who to interview, she wants to really capture different and diverse perspectives on health and well-being, so looking to different fields … how those lead to health.”

An upcoming episode will explore how acting can build empathy because an actor must try relating to others by getting into character, Wang said. Slusser explores acting’s connection to health and speaks to Joe Olivieri, professor and head of acting at UCLA School of Theater, Film and Television.

Wang said the team’s major goal is to reach students and faculty and pique their interest in connecting the dots between everyday elements of their life and health.

“We hope that people think the topic is interesting, (that) it gives them new insights and maybe helps them start thinking about different ways that they can live a healthier life,” Wang said.