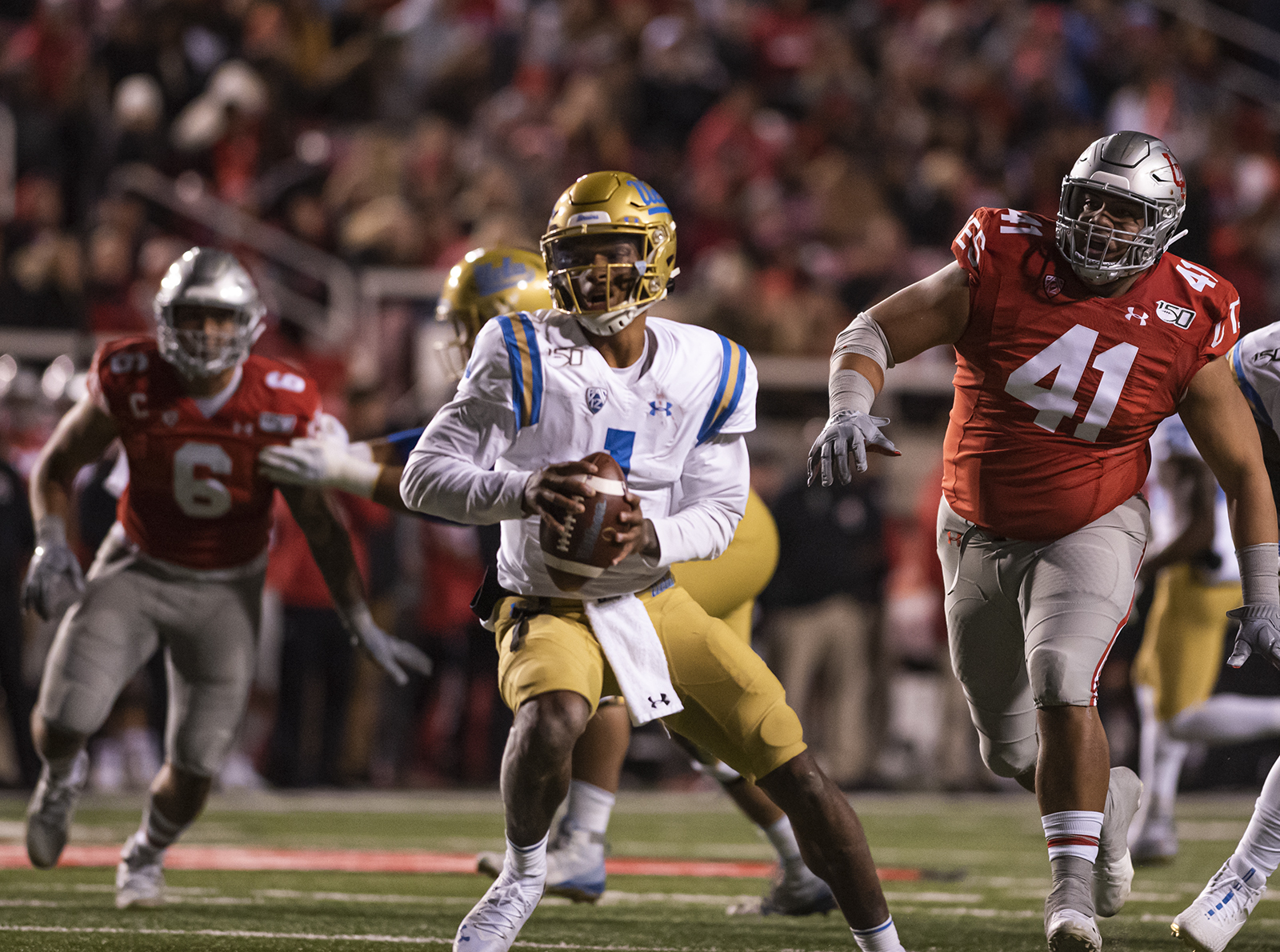 SALT LAKE CITY—The Bruins made too many mistakes to give themselves a chance.

Although the scoreboard didn’t indicate it, UCLA consistently moved the ball, won the time-of-possession battle and only went three-and-out twice in 60 minutes.

However, the Bruins failed to cash in time and time again, finishing the night with three red-zone turnovers – including a fumble that went for a 68-yard scoop and score to give the Utes a 21-3 lead in the second quarter.

Coach Chip Kelly said he was pleased with the way the offense sustained drives against the third-ranked total defense in the nation, but he admitted the team was too sloppy in key moments to be able to stay in the game.

“I thought we moved the ball well early offensively, but we didn’t convert in the red zone where we turned the ball over, and that’s part of the process against a good team,” Kelly said. “You can’t give them that many opportunities. That’s kind of what the game boiled down to.”

Sophomore quarterback Dorian Thompson-Robinson accounted for two of those three turnovers deep in Utah territory and four of the team’s five total turnovers on the night. He finished the game with 219 yards on 20-of-36 passing, two interceptions and two fumbles lost.

The sophomore signal-caller took responsibility for his poor ball security following the game, but said he felt as though the offense never got on the same page at any point either.

“I put all that on me – I’ve got to protect the ball better,” Thompson-Robinson said. “But I think as a whole, the offense, I don’t think we were clicking tonight. We had a lot of mistakes and, against a team like this, you can’t have mistakes like that.”

Thompson-Robinson dealt with heavy pressure throughout the game as well, falling victim to the Utes’ pass rush five times for an average loss of 11.6 yards per sack.

Thompson-Robinson also said he and his teammates failed to stay in the moment Saturday night and the game was a learning experience for a group that he thought may have been too focused on the bigger picture.

“A lot of our guys had their minds set on the Pac-12 championship after this week and I think that’s really what it was,” Thompson-Robinson said. “We were looking too far ahead instead of focusing on the task at hand, so I think now I see it as a very humbling moment for our team.”

His counterpart in the game – Utah quarterback Tyler Huntley – completed 14 of his 18 pass attempts for 335 yards and three total scores, including touchdown passes of 69 and 83 yards in the second half.

Huntley’s backfield mate – running back Zack Moss – also had a big night for the Utes, rushing the ball 17 times for 127 yards and two touchdowns.

Senior linebacker Lokeni Toailoa had high praise for Moss, but said the Bruin defense did a poor job of finishing plays and executing as a unit.

“(Moss) is probably the best (running back) we’ve seen, but that doesn’t excuse anything,” Toailoa said. “Tackling is tackling, whether it’s (Moss) or a high school running back. You have to tackle him no matter what.”

Meanwhile, UCLA struggled to get things going on the ground against Utah’s top-ranked run defense, finishing the game with just 50 rushing yards despite collecting 22 yards on its first three plays from scrimmage.

Redshirt senior running back Joshua Kelley – who entered the contest averaging 107.6 rushing yards per game, which led the Pac-12 – ended the night with 78 yards on 19 carries.

UCLA will now need to win each of its final two games to become bowl eligible. It will face USC on the road next week before closing its season at home against California on Nov. 30.