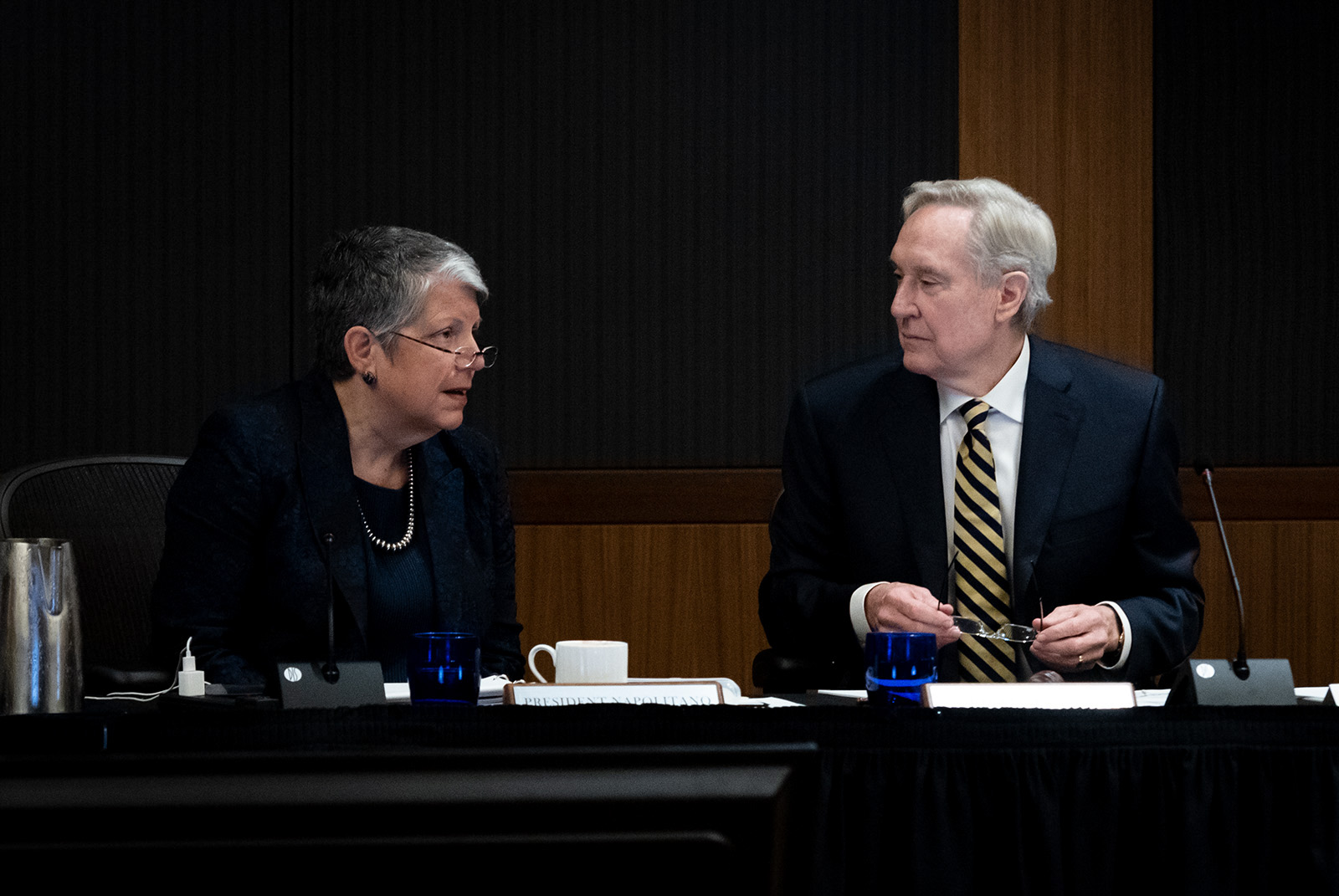 By Julia Shapero and Sameera Pant

A University of California, Santa Cruz graduate student accused Regent George Kieffer of sexual misconduct directed toward her in 2014.

Rebecca Ora, who is also the external vice president of the UC Santa Cruz Graduate Student Association, demanded Kieffer’s resignation and greater oversight of the governing body of the University of California during the public comment section of a UC regents meeting Wednesday.

“This has gone too far,” Ora said at the meeting. “We need resignation; we need policy change; we need punitive measures against the University and we need support for students who report.”

Ora said Kieffer grasped her upper thigh throughout a dinner with her and other students on Nov. 18, 2014, prior to the November 2014 regents meeting. Ora said Kieffer invited the students to the dinner in order to garner support for the UC in its battle over tuition with the state. Kieffer ordered wine for the table despite the presence of undergraduate students, Ora added.

Despite Kieffer’s alleged actions, she said she did not make a scene or immediately report the incident because of Kieffer’s status as a regent.

“I was unsettled, uncomfortable, and felt powerless to stop this figure of authority from putting his hands on my body,” Ora said. “I told myself we were discussing the tuition of hundreds of thousands, and I should not make a scene.”

Ora said she did not initially report the incident because of power difference between herself and the regent, but decided to report a year and a half ago.

“I do not believe the board responsible for overseeing the University of California – including how it responds to complaints of sexual harassment and violence – should be populated by those who engage in the same misconduct it supposedly condemns,” she said.

“The entire university community has one Title IX policy and the UC regents have their own Title IX policy, which is really just a general grievance policy if anybody has any complaint whatsoever,” Ora said in an interview with the Daily Bruin. “Any sexual misconduct complaint is handled the same as if somebody claimed some financial issues or something.”

“In the words of a Title IX employee, in the regents policy, I, the complainant, do not even exist,” Ora said.

UC spokesperson Claire Doan said in an email statement that the UC takes the allegations seriously and is committed to maintaining an environment free from harassment and discrimination.

Doan said because of student privacy laws, the UC could not comment on Ora’s specific allegations. However, she said the UC could confirm that it responded to the allegations as soon as it became aware of the report.

She added the UC is continuing to handle the case through proper channels, in accordance with the Regents Policy and with UC’s Sexual Violence and Sexual Harassment Policy.

Ora told The Bruin that she was offered the option of legal mediation to informally resolve the issue. She was encouraged to take this path to avoid a formal investigation, Ora added during public comment.

The mediator told Ora that she would have the opportunity to negotiate and say what she wanted the outcomes and consequences of the process to be, Ora said. If she proceeded with a formal investigation, Ora was told she would likely have less of a say in the consequences.

“My response to that was, actually, well if that is the case … then I will go public,” Ora said. “And it wasn’t a threat. … I understand that as a student leader, this is not my fight, this is a systemic problem.”

The mediation failed, Ora said. Ora later filed a request to conduct a formal investigation with the UC, she added.

“The Regents were unwilling to move on pretty much any issue that I asked for,” Ora said. “I asked for his resignation and the response was not only that he would not resign but also that none of his powers as a regent would be curbed.”

Ora added in public comment that the process continues to cause her harm. She said as a result, she has been excluded from committees because of Kieffer’s presence, has regular panic attacks and has fallen behind on her academic progress.

“Until now, I have tried to follow ‘the process,’ but it has failed,” Ora said.

When Kieffer was chair of the board, he attended a number of UC Student Association meetings, Ora said to The Bruin. Despite being on the board as well, she did not attend those meetings.

Ora added that she had wanted to serve on the selection committee for the new UC Santa Cruz chancellor in 2018, largely because she wanted to discuss Gopal Balakrishnan, a UCSC history professor who had been terminated from his position after violating the university’s sexual harassment policy, Ora said.

“Ironically, I was not able to serve on that committee because George Kieffer, (who) had inappropriately touched, (who) at the time was responding to my complaints … was on that committee,” Ora said.

Ora said the issue at hand was greater than her case alone. It’s not just that someone harmed a graduate student, she said.

“It’s that (that) person … last year was chair of the Board of Regents, that oversees all the consequences for all the professors and everyone in the system and writes the policy for the system,” she said.