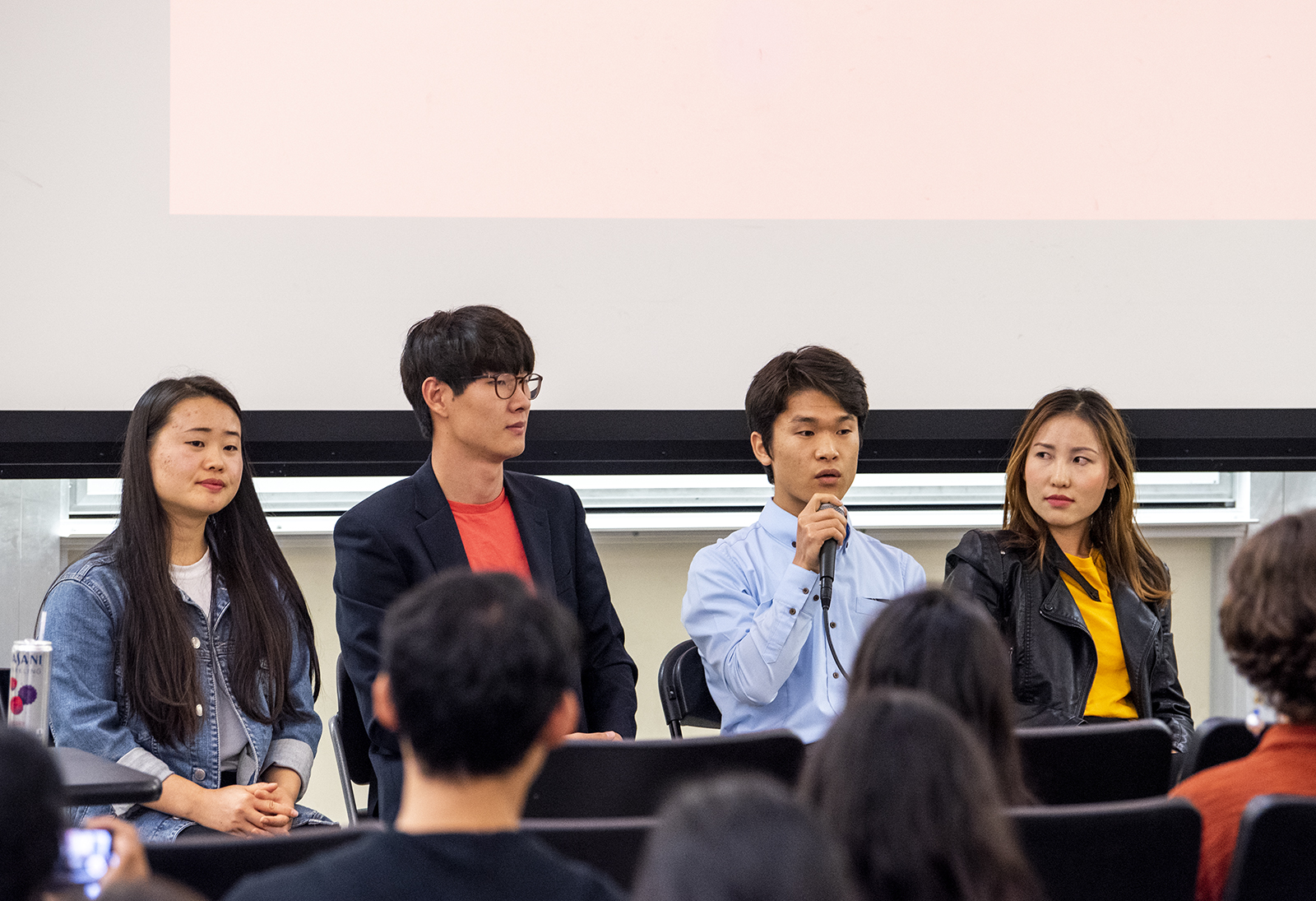 North Korean refugees, invited to campus by the UCLA chapter of Liberty in North Korea, spoke about their experiences escaping the country. They also discussed the differences between life in North Korea and South Korea. (Tess Horowitz/Daily Bruin)

For years, Joy Kim couldn’t understand why her mother left her behind when she defected from North Korea.

Until she found herself in the same position.

Kim shared her story of defecting from North Korea in Korean with subtitles in English for audience members. The other refugees joined her after for a Q&A session.

LiNK is an international organization that funds rescue missions in North Korea and aims to change the narrative surrounding North Korean refugees. Nine hundred and thirty-nine people have been rescued and brought to freedom by the organization since its establishment in 2004, according to its website.

The event was a collaboration between the LiNK chapters at UCLA and USC, and it was held to give students the opportunity to hear firsthand from people who experienced the hardships of life in North Korea.

“I think it’s very easy to only see North Korea as an evil country, as part of this axis of evil, as people say,” said Ashley Ng, president of UCLA’s LiNK chapter and a fourth-year global studies student. “But I think this event does a good job of showing that there’s North Korean youth literally born in the ’90s that are just human like us and had the unfortunate circumstance of being born in North Korea (where they faced) human rights violations.”

The program, started last year, trains North Korean refugees to be advocates and storytellers in hopes of inspiring others to take action.

“Each of (the fellows) have their own defection story and LiNK just helps them craft their stories and become really good storytellers so that they can bring other people along,” said Becky Chung, a special events and donor relations intern for LiNK. “And we always hear that it’s different when (people) get to hear … from a North Korean themselves.”

The fellows spend three months in the United States, during which time they travel to different states to speak to students, community leaders and government officials. The fellows who spoke at the event Tuesday have been in the United States since September and will return to South Korea at the end of November.

A university student in South Korea studying social work, Kim spoke about the hardships her family experienced in North Korea and the challenges she faced as a result of being trafficked once she crossed the border to China.

She said that for women like her, fleeing from North Korea is often the start of more hardship.

Kim’s family in North Korea was very poor. When her stepmother tried to marry her off, she decided to flee to China in 2009. However, unable to pay the broker who helped pay off the guards that kept watch over the border, Kim was sold as a bride.

“For three days, a broker paraded me around villages in northern China and crowds of men would gather to bid on me,” Kim said. “I was treated like an animal in a zoo.”

A man eventually paid the equivalent of $3,000 for her. He and his parents kept constant watch over her in fear she would escape, Kim said.

Some time after her arrival, Kim discovered she was pregnant. Because a pregnancy would make her eventual escape challenging, if not impossible, she said she tried to induce a miscarriage.

“I climbed up the highest tree in the backyard and jumped down,” Kim said. “I also carried around heavy buckets of water.”

Despite her efforts, Kim gave birth to a baby girl after nine months.

She said she resented her daughter at first, but before long the girl became her only reason to live.

It was around this time that a member of LiNK approached Kim and offered to help her cross the 3,000 miles that separated her from South Korea. The crossing, however, would be too dangerous for a child, he told her. Unable to pass up the opportunity, she decided to escape, determined to one day return to China to take her daughter to freedom.

Kim finally reached South Korea in 2013, four years after first leaving North Korea. Because of her harrowing experience, she said she wants to devote herself to helping North Korean women who have experienced the same trauma.

“Sixty percent of North Korean female refugees in China are trafficked into the sex trade,” Kim said. “For female North Korean refugees, escaping from North Korea is not the end of their journey, but the beginning of their fight for freedom.”

After Kim shared her story, the other three fellows joined her at the front of the room to answer questions from audience members about their experiences in North Korea and South Korea.

Jeongyol Ri, a student at Seoul National University who defected while he was in Hong Kong for a math competition, shared the same sentiment. After resettling in South Korea, he started looking for tutoring jobs to pay for food and housing.

The parents of a young boy were interested in hiring him, but after they figured out he was from North Korea, they had to rethink their decision, he said.

The fellows also spoke about the differences they observed between life in North Korea and South Korea.

Ilhyeok Kim, a student studying political science and diplomacy at Hankuk University of Foreign Studies in Seoul, said he was shocked by the number of candidates that appeared on election ballots. When he voted in North Korea, he said he only had one candidate to choose from.

Despite the benefits of life in South Korea, some fellows also missed aspects of their life in North Korea.

Ri confessed to yearning for the camaraderie he felt in North Korea, where he knew each and every single person who lived in his apartment building. In South Korea, people are so busy, he said, that he doesn’t have the time to get to know his neighbors.

Students who attended said they were moved by the fellows’ stories and perspectives on public perceptions of North Koreans.

Not a lot of information exists about the lives of people who escape from North Korea, said Bayla Dermer, a second-year Korean studies student who attended the event.

“Since I’m a Korean major, I’m learning about South Korea,” Dermer said. “I’m not learning anything about North Korea, like nothing at all. It’s not part of the curriculum, so I feel like I should … know more than just what is in the news because … that’s not exactly accurate.”

For others, the event was a reminder of the work that still needs to be done to draw attention to the thousands of North Korean refugees still making their ways to freedom.

“I’m not even Korean myself, but I feel for these people because they’re human beings and because it’s a human rights violation,” said Mako Mori, the community director of the LiNK chapter at UCLA and a fourth-year political science student. “When I hear the stories that they tell, I can just relate to it on a (personal) level and it just reminds me that we’re all humans.”