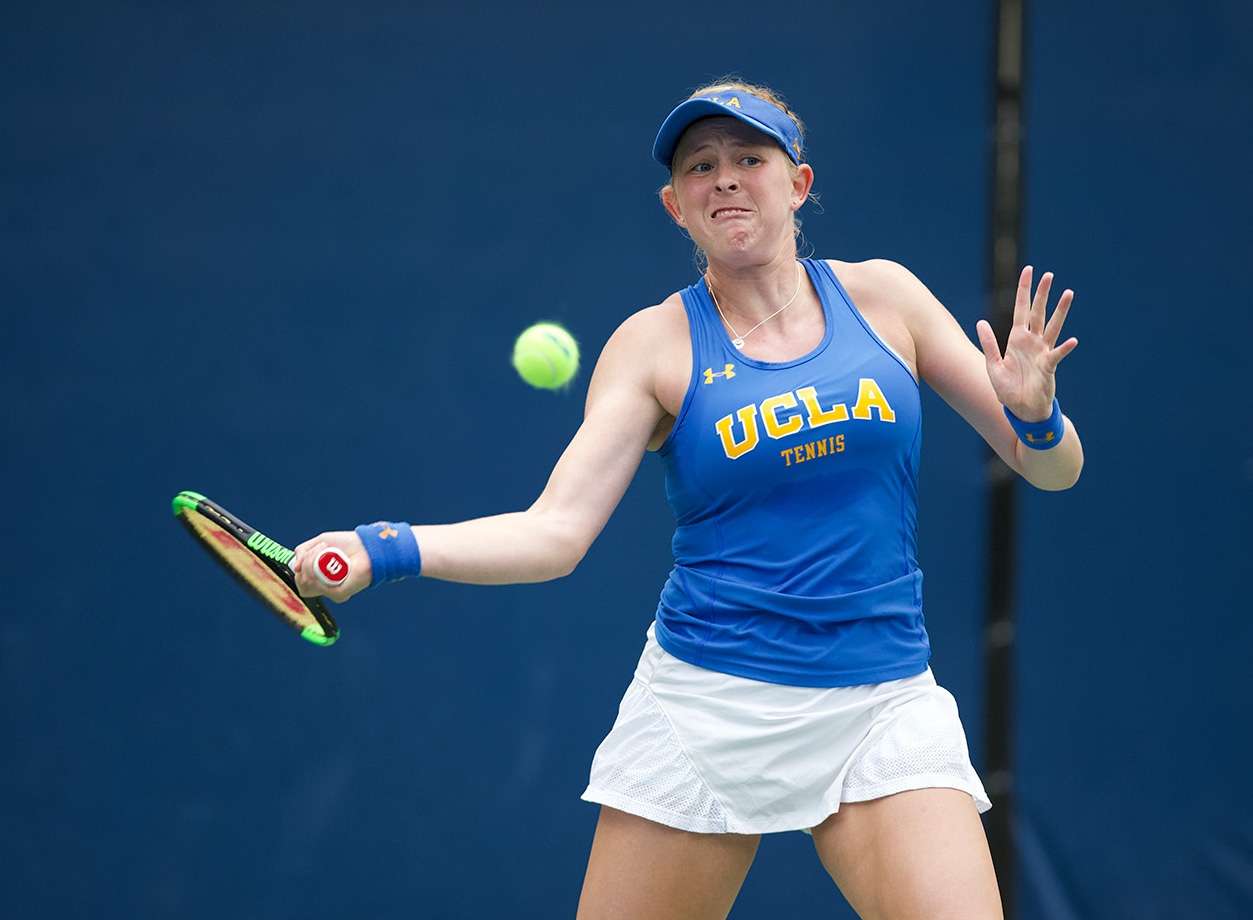 Sophomore Elysia Bolton was one half of UCLA women’s tennis’ No. 4-ranked doubles pair that emerged victorious at the Oracle ITA National Fall Championships on Sunday. (Andy Bao/Daily Bruin)

The Bruins won the doubles championship at their last fall tournament.

“It feels great to come up with a win from this tournament,” Bolton said. “We’ve been playing together now for a year and a half – just about two years. It’s nice to see the hard work and dedication that we both put into it.”

The duo won five consecutive matches during the five-day tournament, not dropping a single set.

Hart and Bolton started with a win over Selin Ovunc and Taylor Russo of Auburn, 6-2, 6-3, in the round of 32. Next up were Ayumi Miyamoto and Lisa Marie Rioux of Oklahoma State, who Hart and Bolton defeated 6-4, 6-3.

In the quarterfinal, Hart and Bolton defeated their first nationally-ranked opponent – No. 11 Lauren Alter and Tatum Rice of Arkansas – 6-0, 6-4. The UCLA duo also triumphed over Yulia Starodubtseva and Alesya Yakubovich of Old Dominion 6-2, 6-3, in the semifinals.

In the finals, Hart and Bolton went down 2-0 in the first set before recovering and winning the match, 6-4, 6-3.

“It’s amazing – my freshman season, I got to the finals and lost in the finals,” Hart said. “I didn’t want a repeat of what happened to my freshman year (to) happen to me this year. We played really well all week, and I felt really confident that we can make it happen this year.”

Singles competition featured three Bruins who occupied the top three seeds in the draw. Bolton – who was the top seed and is ranked No. 16 nationally – took down Georgia’s Lea Ma – who is ranked No. 5 out of newcomers and freshmen – and 31st-ranked Paola Exposito Diaz-Delgado of Virginia Commonwealth in straight sets, before she was defeated by No. 5 Kelly Chen of Duke.

No. 2-seeded freshman Abbey Forbes defeated No. 39-ranked Livia Kraus of Baylor. She continued her winning streak against Valentina Ivanov of California, 6-0, 6-2. Forbes then played 12th-ranked Cameron Morra of North Carolina, who she beat 6-3, 6-1.

Her run came to a conclusion in the quarterfinal with a loss to No. 2-ranked Estela Perez-Somarriba of Miami.

Forbes and Junior Annette Goulak defeated unranked Ahmeir Kyle and Emily Thomas of Xavier, 6-0, 6-1, before being beaten by No. 31 Marie Mattel and Rebeka Stolmar of UCF in the round of 16, 6-3, 6-2.

Coach Stella Sampras Webster said before the tournament that her players would each face a test this tournament, and after the tournament, the coach said there was still room for improvement for the Bruins.

“I think overall, as a team, we need to get better – being more disciplined and having a longer shot tolerance,” Sampras Webster said. “When you play against the better players, they’re able to maintain that high level for a long period of time. I feel like that’s something we can improve on.”