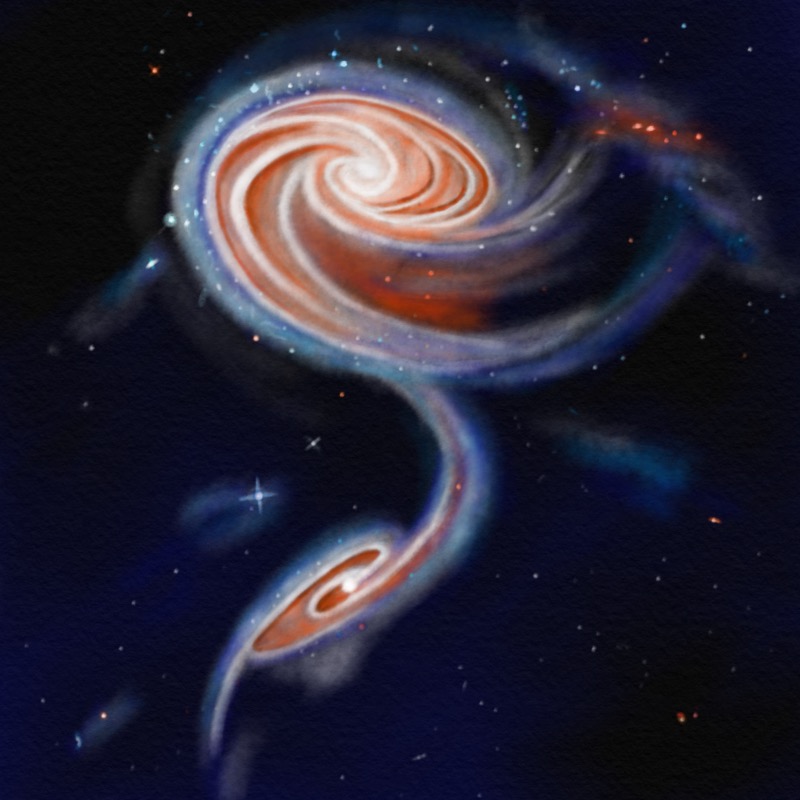 The Halos and Environments of Nearby Galaxies project found that galaxy collisions happen much more often than previously thought by taking a sample of over 100 nearby galaxies, the largest sample to date. Michael Rich, a professor of physics and astronomy at UCLA, led HERON’s research, whose results were published in August in the Monthly Notices of the Royal Astronomical Society.

Not only did this find that galaxy collisions happen more often than previously thought, the international team also successfully tested a low-cost telescope in an observatory it made itself to conduct the research.

Galaxy collisions are not quite what the word “collision” would imply, Rich said.

The researchers were interested in the light from stars within each galaxy furthest away from the center, in order to help them see the history of that galaxy.

Rich said looking at a typical image of a galaxy is like looking at the tip of the iceberg – there’s a lot more beneath the surface. The researchers examined faint light from the stellar halos, some of which remains from when the galaxy was forming or when it collided with other galaxies, he added.

“We frequently see signs of collisions in galaxies,” Rich said. “In fact, no matter what kind of galaxy we looked at, we did note that we could see the signatures of a collision.”

The team discovered a general trend — the brighter a galaxy is, the larger its stellar halo, Rich said. Large stellar halos meant more faint light from the debris left over from collisions.

“This may mean that more luminous galaxies are more likely to have had a collision,” Rich said. “We’re still looking into that. But it’s the first time we’ve seen this correlation.”

Galaxies like the Milky Way formed about 12 billion years ago, Rich said. Within that lifespan, a galaxy typically experiences five to 10 significant collisions, he added.

“So one collision every billion years is something that we consider frequent,” Rich said.

The universe is expanding, but galaxies tend to be clustered together, Rich said. Galaxies tend to collide if the gravity between the two overcomes the universe’s expansion, and as a result, a group of galaxies might merge into one big galaxy over time, he added.

Francis Longstaff, a UCLA professor of insurance and finance at the Anderson School of Management, worked with Rich to manage the building of the observatory HERON used.

Rich said Longstaff convinced him that it would be interesting to collaborate on building their own observatory. As a result, Longstaff and Rich bought a professional-grade telescope and built an observatory in the mountains, around 75 miles north of Los Angeles.

Soon after, Rich said he started to notice that the telescope and the camera used to take images were ideal for the fainter outskirts of galaxies.

Huge observatories typically cost millions of dollars and often have limited periods of time in which individual researchers can access them, Longstaff said. The nature of HERON allowed Rich to work on a small budget and have 100% access, Longstaff added.

“It’s something doable on a small UCLA budget,” Longstaff said. “We’re professors, we’re not rich, this is kind of done at a hobby level.”

The telescope was constructed in such a way that it has a very short focal ratio, meaning that it has a large field of view. This makes it much easier to look at galactic halos and interesting objects on the periphery of galaxies, Longstaff said.

“That means that we can’t get as many details as a large telescope could do because … the large telescope can zoom in and resolve smaller objects,” he said. “But since we’re looking at large-scale objects, that’s less important.”

Although the telescope was designed so that it could be owned by novice astronomers, it is slightly different from a regular amateur telescope, Longstaff added.

“It’s designed so that you can’t look through the telescope, you can only put a camera at what we call the prime focus,” he said. “It’s a little different than your typical amateur telescope, where you actually look through an eyepiece.”

The telescope has one mirror that reflects light onto the lens of a Charged Coupled Device camera in front of it, which is similar to the cameras on phones or 35 mm amateur cameras, Rich said.

“The technology is not that high-tech, but it’s pretty sensitive,” Rich said. “And these programs allow us to control the CCD camera to guide the telescope very precisely.”

Javier Román, a postdoctoral researcher at the Instituto de Astrofísica de Andalucía, developed the software used in the research. The software was created in order to discern the faint light data, which cannot be obtained using regular software.

“This is a very important part of the research because the images are not perfect and you have to create software to improve the quality of the images,” Román said.

Rich said the set of raw images from the camera was made public in an archive at the Infrared Processing & Analysis Center at the California Institute of Technology in late October.

“Anybody in the world can actually download the images and work with them,” Rich said. “If they see more in them than we do, that’s great.”